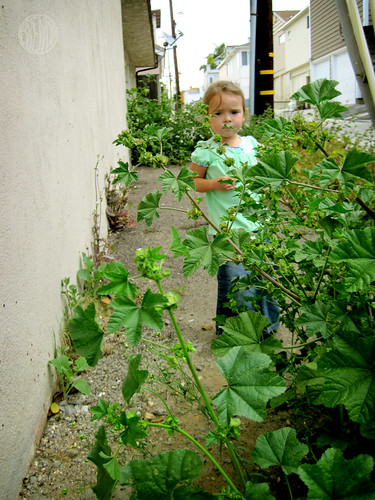 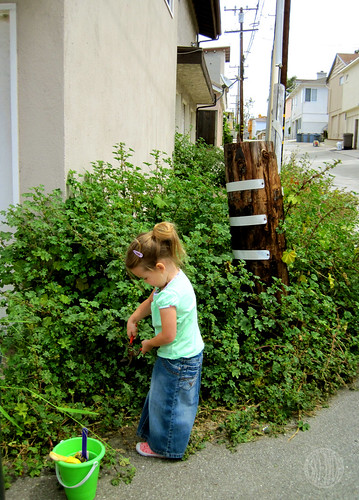 On Earth Day (yesterday) I decided we would do some weeding. Not because we wanted to celebrate the earth or because we needed to take back our beautiful yard from weeds (cough! choke! gack!) but just because it seemed like something fun to do. As you know, we do not have a yard and the place where the weeds grow in back of our house is really just a crack in the asphalt. It’s also not our job to weed it. Our landlady’s son comes about two times a year and rips the weeds out with his bare hands. He also wears super tight pink t-shirts but I’m not going to comment on that.

I thought it might be fun to pull weeds and get out and enjoy some nice spring air after a particularly nippy storm that had just rolled through. I know the rest of the world would call our storm a mere sprinkling but to those of us without central heating and beach-houses made out of toothpicks it was “burrrrrrryy” cold, as Bug would say. Also, I’m just trying to think of fun things for Bug and I to do together that don’t cost money and don’t drive me crazy. So weeds it was! 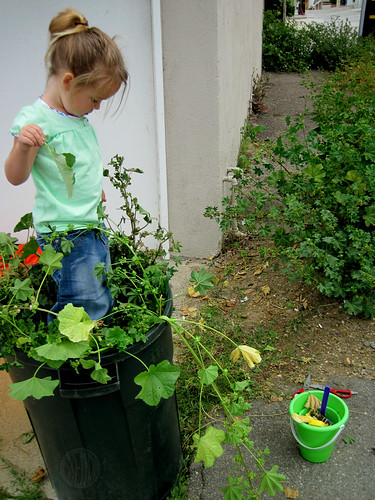 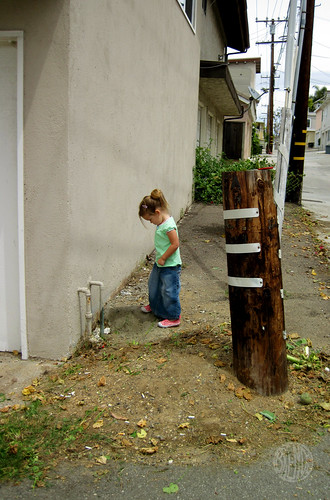 We like to call this patch behind our house Ladybug Hill because the ladybugs thrive here. Well they did before I ripped up their habitat. But it’s more correctly called Dog Pee Corner because our alley is a popular thoroughfare for the daily dog walkers. I used to have pots of plants back here but people kept walking off with them so I gave that up. It also kind of grossed me out to be gardening where dogs mark their territory regularly.

What I really should do is buy some big planters, fill them with drought-resistant rosemary, install a drip system and never worry about it again but I won’t because I don’t want to spend the money when it’s not really our property. And don’t even get me started on what it’s like to try to communicate a good idea to my landlady. That never ends well. 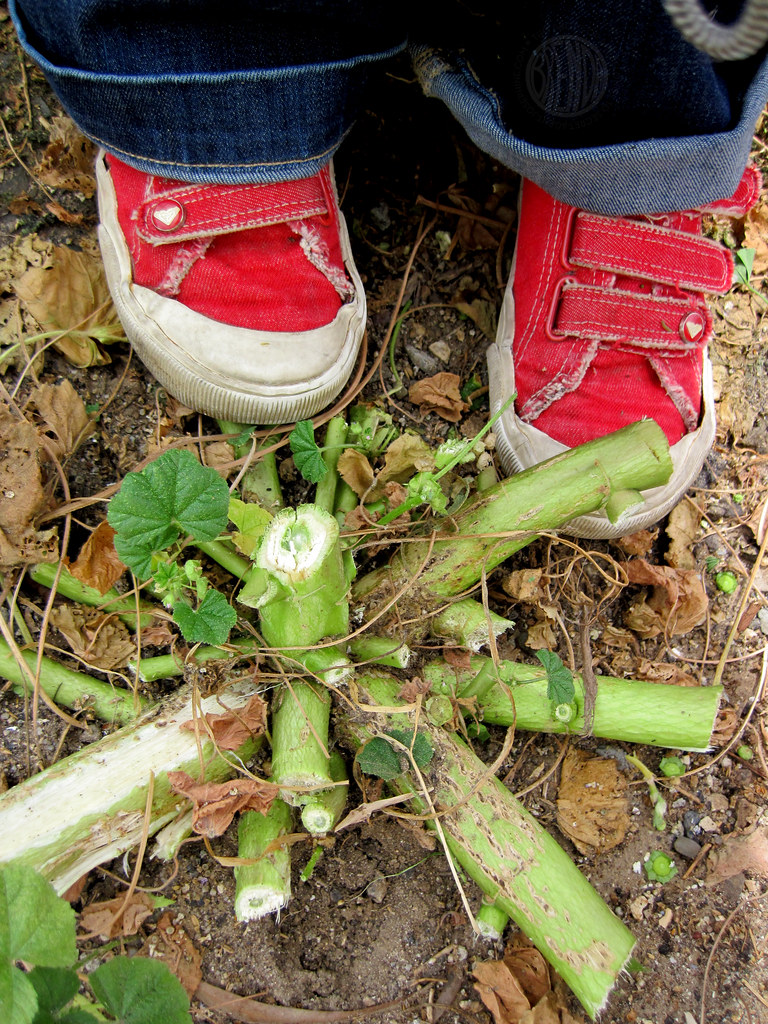 Now I’m worried that my good Samaritan weeding will probably end badly because I could not for the life of me pull out these GIANT wrist-sized stalks. I’m scared Mr. Tighty-Pink-Biceps is going to be mad at me for not pulling them out by the roots and leaving these octopus stubs that will only grow bigger and more evil. Oh well. At least it was a fun outing for Bug and I.

Bug wasn’t really able to pull any weeds herself. She tried but they were stubborn buggers. She did keep me company with a running commentary though. It’s a wonder Toby didn’t open his office window and yell at us to be quiet because she did not stop talking for one minute. But then what else is new? 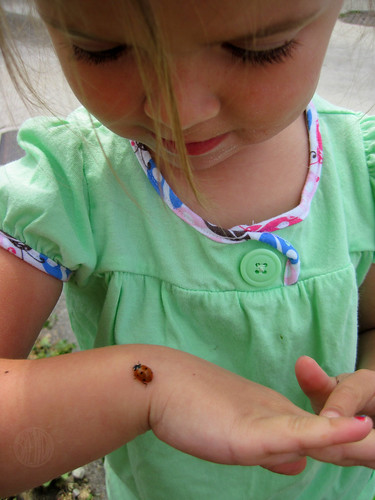 Sometimes I feel like I am the Winchester Mystery House Woman who had to listen to hammering or else she would die. Except my hammering is Bug’s constant yammering and I sometimes wish it would stop so I don’t kill myself. But then she goes to sleep and I instantly forgive her for all her constant chattiness because she is cute when she is asleep and I know someday she’ll turn into a teenager who probably won’t talk to me. It’s just hard to remember that when she’s in the middle of a soliloquy on LadyBugs and seems to be stuck on repeat if I don’t offer an “uh-huh” or “yes, sweetie” after every sentence. 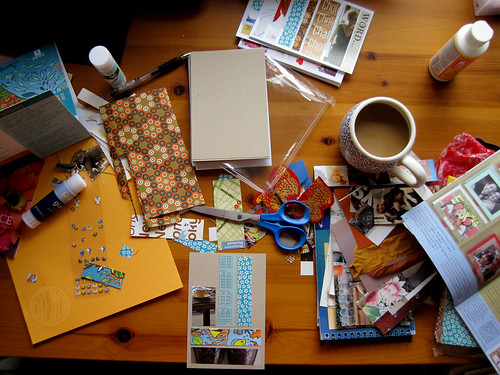 After that little gardening task, I was pretty tired so we went inside, had lunch and then made a batch of Junk Mail postcards. I know. How very earth-conscious of us. But it wasn’t really on purpose. I just felt like crafting because I was cold and I wanted to stay inside. 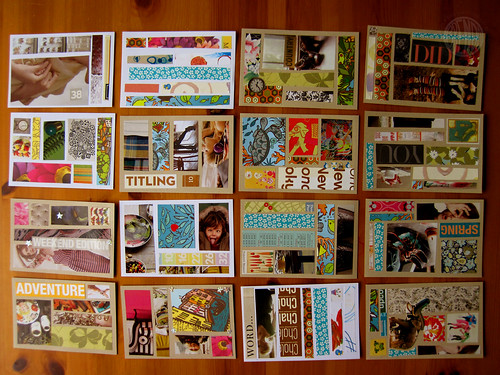 I was thinking of selling them but things aren’t really selling much in my shop anymore (Could it be the economy? My OC prices? My wares are crap? I don’t know…) so how about I give away a batch?! Anyone? Anyone? Bueller? If you’d like them leave a comment and I’ll pick someone randomly and mail them out to you. 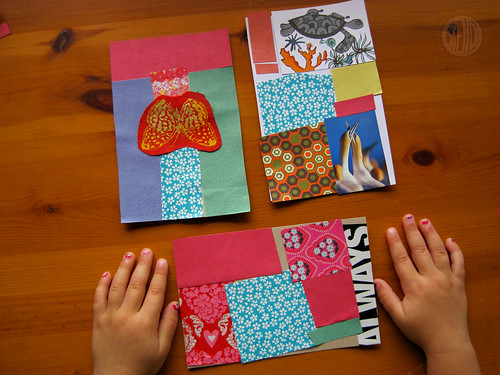 Bug made some too. We’re not giving hers away though. Each of these was made with a specific friend in mind. Bug is the best at correspondence these days. She writes letters to her friends faster than I can mail them off. I’ve got a stack sitting next my laptop right now waiting for stamps. 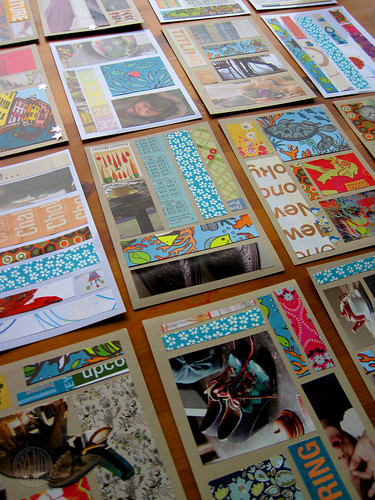 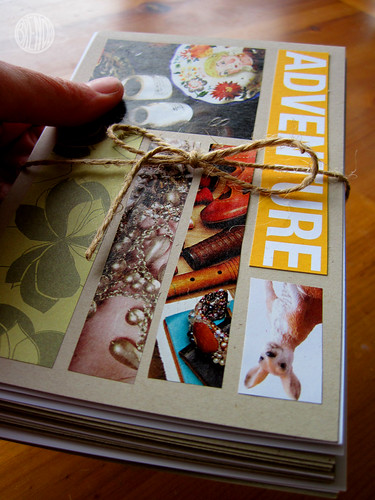 Postcards anyone? There are 16 of them in the bundle. Comment away!