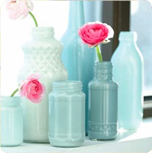 Pretty bottles in soft shades of blue! I think I can do this. I’ve got paint. I’ve got recycled bottles. This might be a fun project! Spied via *happy place*. 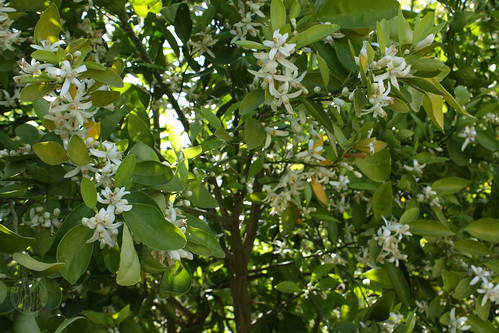 When I was out at my mom’s this last weekend I couldn’t help but notice the smell of citrus blossoms in the air. I know a lot of people start sneezing when the blossoms explode like this but not me. I love it. It instantly takes me back to my childhood. Sometimes it reminds me of playing in the backyard at my Grandma’s, scraping my arms up on the sharp orange tree thorns or helping my Dad with his beehives (from a respectful distance of course) or driving at night through the orange groves at top speed with my head stuck out the sunroof….

Sometimes it reminds me the year that I came home from college. I graduated early and left my classmates behind. I sort of interrupted everything, collected all the credits I needed for a paper degree and went home to rethink the way my life was going. That was not a very good year for me. I was hopelessly alone, ashamed of myself, jobless and depressed. I used to lay on my bed with the windows open and just stare at the ceiling while the scent of orange blossoms wafted over me. It was a bitter time but I remember the orange blossoms fondly. They’ll always be there for me. So strong. So distinct and such a part of who I am and where I grew up. 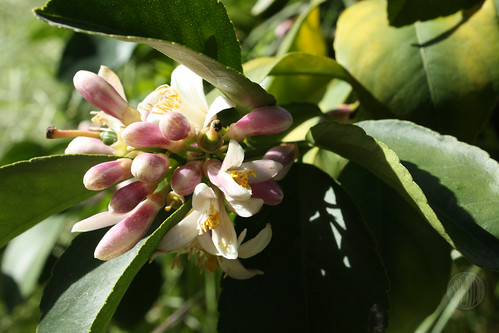 So anyway, sorry about that little reverie.

As you can see, my mom’s citrus trees are in full bloom. Her backyard looks like a fourth of July festival of popcorn. My mom said I should pick all the remaining fruit on her trees because when the blossoms come that means the old fruit needs to go, unless you want to leave it there to rot like we have in the past. After the success of Lemon Week, I’m all for harvesting every single lemon and tangelo she has. 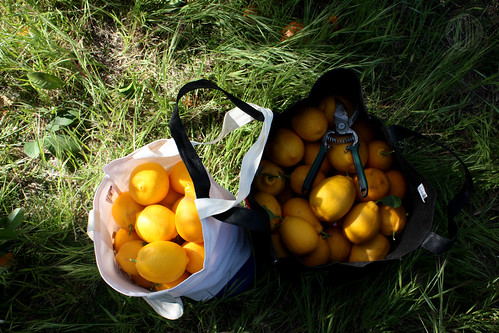 Half an hour later I had two big bags full lemons and one small bag of tangelos (and arms full of scratches to prove it). I cut some branches of blossoms to take home too. They might not look so pretty when the leaves crinkle and the blossoms turn brown but the scent is divine. Then we packed up and headed for home. 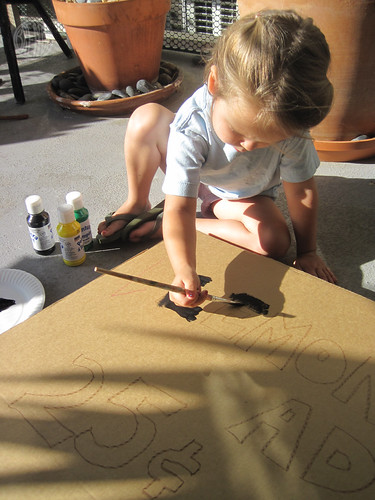 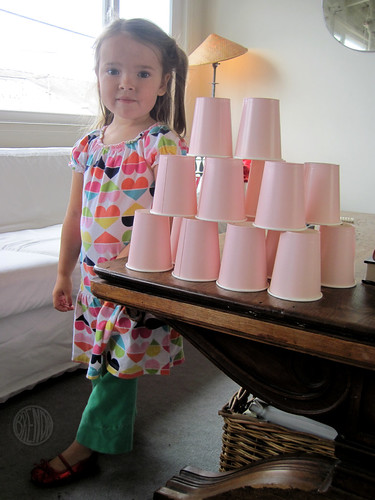 Somewhere along the way I must have mentioned making lemonade to Bug because she instantly locked onto the idea of having a lemonade stand. Her favorite tv show is Olivia right now and apparently there is an episode where Olivia sets up a lemonade stand. Bug has acted it out several times a day including the part where Olivia has to have a trash can for the cups to be thrown away in. Apparently that is a very important part of the show if you are four.

Anyway, she painted her own sign (with some help from me) and I let her play with some leftover pink cups from her Pinkkkkity first birthday. She stacked them like that all by herself. Unfortunately, she also had them rolling all over the floor getting dirty so they are pretty much contaminated now. Later when we went grocery shopping, I stopped by the 99 cent store and bought her a new pack of pink cups. Which by the way, are NOT cheaper at the 99 cent store. You can buy a pack for 99 cents but you only get twelve in a pack! Hmph! I was a bit annoyed by that. 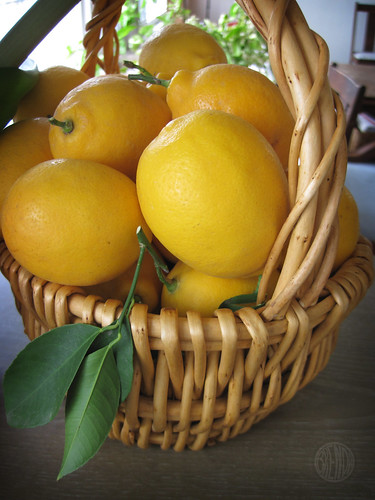 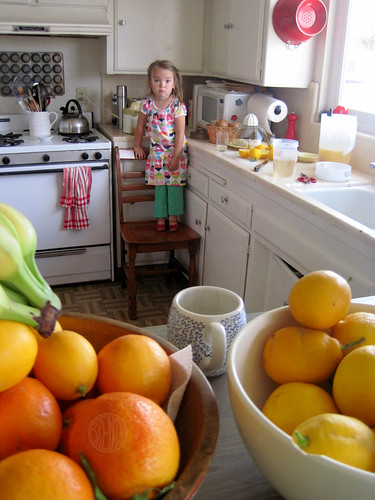 We put all the lemons in pretty baskets and made a batch of lemonade. I even made simple syrup. It was a snap! I don’t know why I’ve been making lemonade any other way. 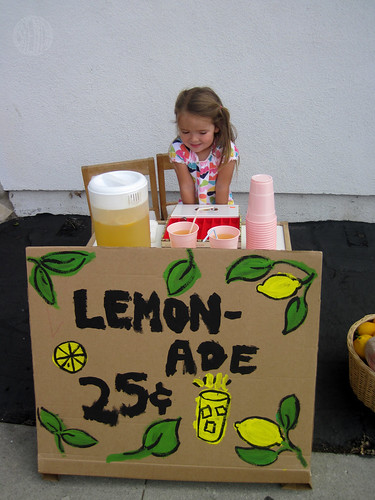 I was a little worried about the stand idea. My biggest problem is our neighborhood. We don’t live in suburbia. We live on a highway right on the fringes of businesses. It’s nice to be able to walk to a coffee shops and restaurants but it’s not really the kind of neighborhood where you can let your kids hang out on the corner by themselves. So whatever stand we put together would have to be carried out there in one trip. It’s not like I can just leave a table and chairs and then come back five minutes later with my pitcher of lemonade and my kid. And there is NO WAY I’m going to leave my kid there to guard our stand. So it was a bit of a challenge. 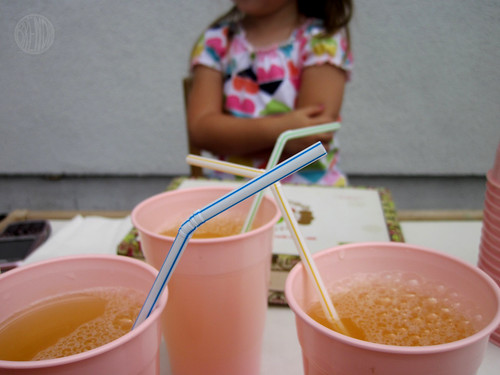 On the flip side, our neighborhood is GREAT for business. We sold out in five minutes flat. Big burly guys in trucks came and bought three and four glasses each to fill their thermoses with. The restaurant employees came out to buy lemons and gossip while they took their breaks. If I had made more than one pitcher of lemonade or bought smaller glasses and filled them with ice, we could have made a fortune. But I didn’t. And I wasn’t too keen on packing up the stand all over again while I went back and made another batch. So we closed up shop and I promised Bug we’d do it again another day.