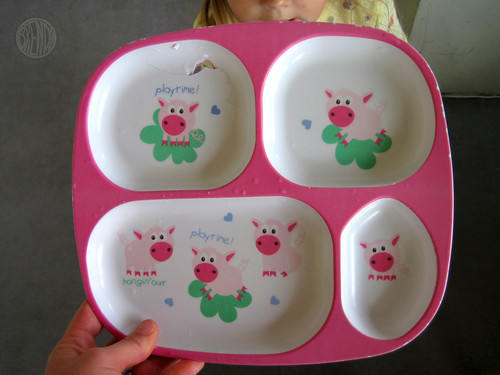 A while back I was having a terrible no-good horrible bad day. I’ve had a few of those lately. I broke our beloved French Press and then on top of that I somehow knocked Bug’s divided melamine pink piggy plate off the dish rack and onto the floor and then a big heavy Fiestaware cup fell on top of it and cracked it.

You’d think I’d at least get a baby out of this clumsiness but no, I’m not pregnant. I just like to stack my dishes a mile high on my drying rack because I refuse to dry a dish by hand with a towel. I was so mad at myself. I wanted to whip myself with that dish towel a thousand times. But I didn’t. I vented to internet instead.

We don’t have a lot of plastic kid plates in our house. I think they clutter up my cupboards and I don’t have that much room to spare. We had the pink piggy one, a Christmas one and a super-long alligator one that pretty much stays in the back of the cupboard because I never serve Bug enough food to fill it up. I don’t know about most kids but my kid thinks every section needs to have food in it.

Anyway, I was devastated when it broke. I really liked this plate. Unlike all the other kid plates I’ve seen around, this one had really cute illustrations (to me). I’m picky about those things because I don’t know, I just can be. It also was pretty faded in a good way because we use it every single day. I sort of like that, that we use the same plate over and over. It’s like our way of not being the uber-consumer. We buy a few things and USE them. Or something or other. Maybe Bug comes by her crazy quirks naturally.

Guess what? Somebody on the internet had a piggy plate exactly like ours! And they weren’t really using it! AND they offered to mail me theirs!!! I love the internet. Thank you for making my terrible no-good horrible bad day not so very terrible after all. 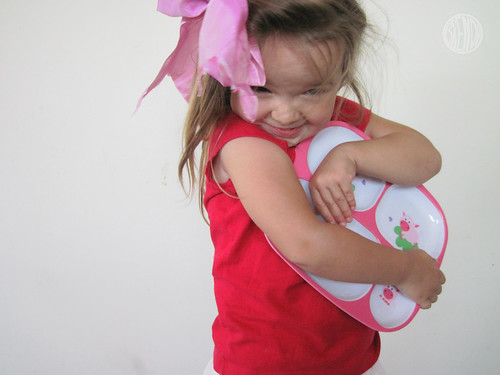