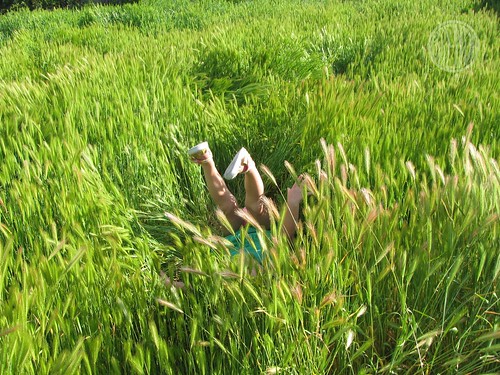 My dad and brother decided to take an unpaid vacation this week. They are long-haul truckers who spend six days a week driving from one side of the country to the other. It’s not an easy job but it pays the bills. They hardly ever get to see their family because they run long and hard. Taking a week off is probably not the smartest thing to do during these difficult economic times but it is a good idea when you’re so fed up with working that you feel like quitting. Hopefully after a week of rest and relaxation they will be in better spirits. 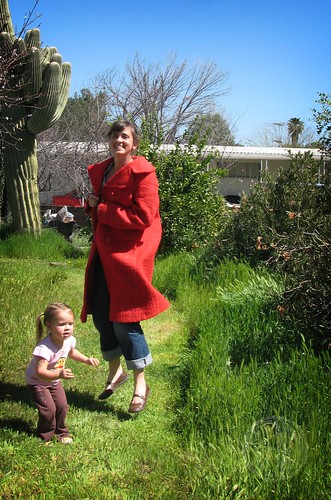 Bug and I rest and relax all the time but that doesn’t mean we didn’t hop in the car quick as a bunny and rush out to the sticks to enjoy their R&R time with them. A fishing trip! Some lawn-mowing! Sign us up! 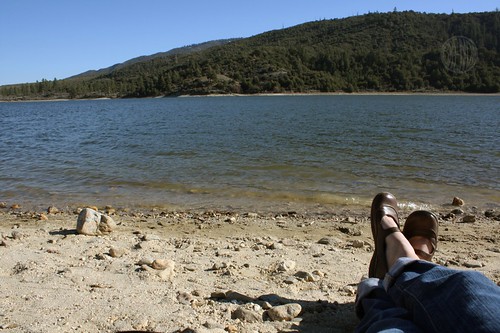 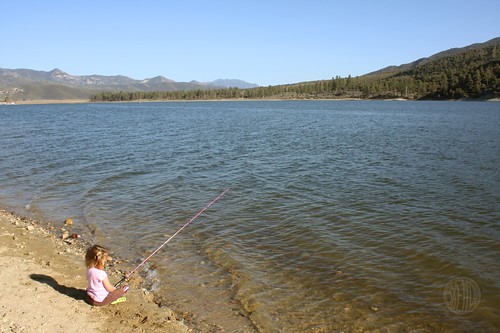 The lake was so pretty. I haven’t been here since I was a kid and it immediately brought back memories of camping and kicking up dust. Camping in the desert is a lot different from camping up in Northern California but it’s still pretty. There aren’t as many trees and you can’t find any moss outside of the scary pit bathrooms but it’s still quite serene and beautiful.

My Dad used to take my brother and me fishing here. I don’t think I’ve ever caught a fish at this lake though. Maybe they don’t exist. Though I know they do because the guy next to us caught five big fat bass and a guy across the lake caught two. But we didn’t catch anything. We never do. 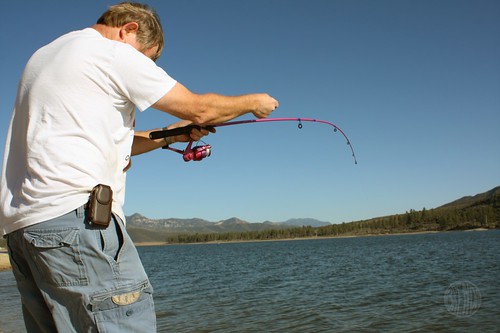 We caught some rocks… 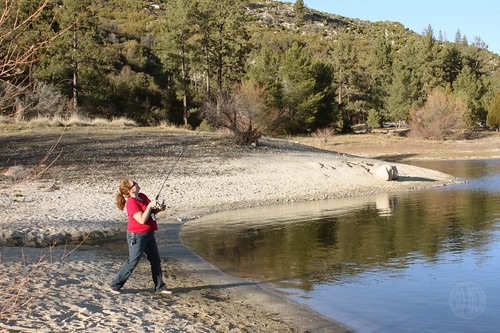 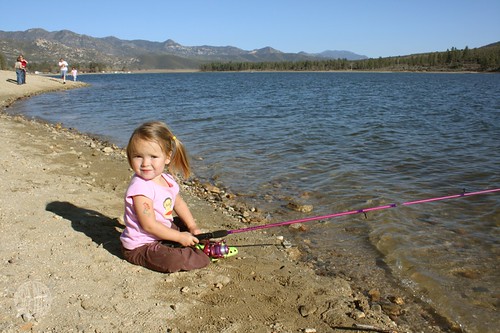 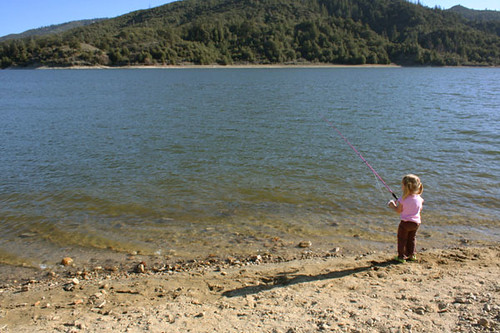 My Dad LOVES fishing. He fishes every chance he gets. Sometimes he stops along the side of the road while he’s trucking and fishes. He could tell you tales all night long about the trout he’s caught and the people he’s met while fishing. I don’t know how many times he’s forced me taste some stinky piece of fish that he cooked in a pan over a campfire because he’s sure that I’ll like it if I just give it a chance. 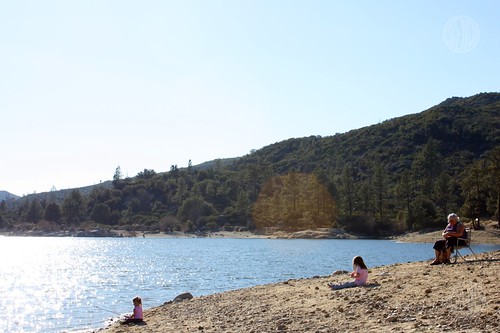 I never do. I can’t stand the taste of fish. But I do like fishing. I just like letting them go again better. Fishing is fun. Eating fish is for the birds, or the cats. I get much more enjoyment out of watching my cat eat the fish I’ve caught than I’d ever get out of the choicest piece of salmon. I don’t care what kind of fancy sauce you put on it. It all tastes like fish to me. Even tuna out of a can. Blagh! 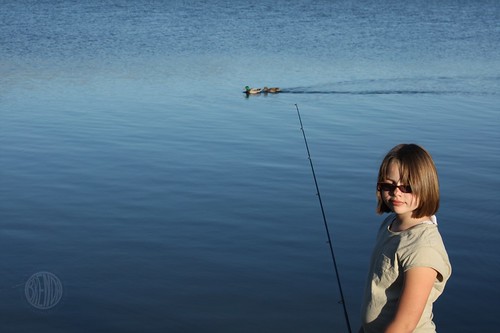 Except when you’re ten and the fish aren’t biting. Then it’s reeeeeeaaaaaallly really boring. But then everything is boring when you’re ten. I remember. 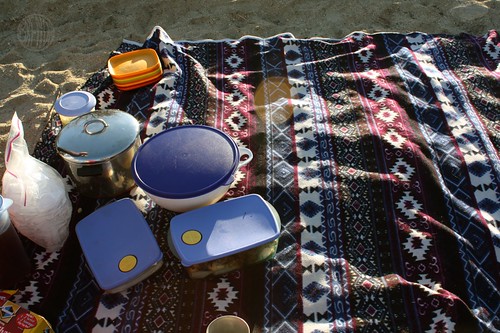 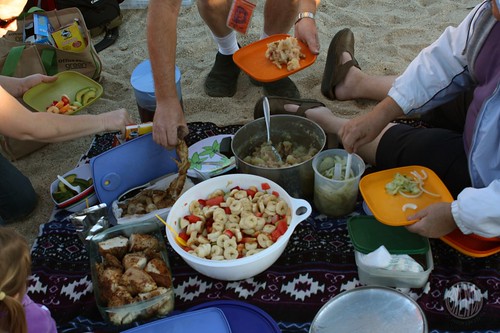 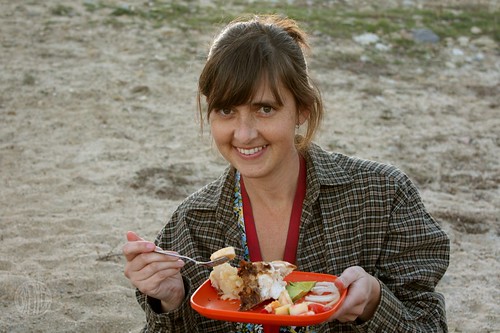 Now that I’m older (and fatter and lazier) I’m inclined to think that the best part of fishing (and camping) is the eating-outdoors part. There is nothing like a big fat picnic next to a lake when you’re starving. Fried chicken, German potato salad, fruit salad, freshly-sliced avocados… YUM!

CC and my mom made all the food. I was supposed to make cookies but I was too busy doing something else and I thought we wouldn’t need them. Who needs cookies when you have enough fruit salad to feed an army? I guess I forgot how much energy you use up when you are running up and down the shore fetching things and untangling fishing lines. We did need those cookies and missed them sorely. 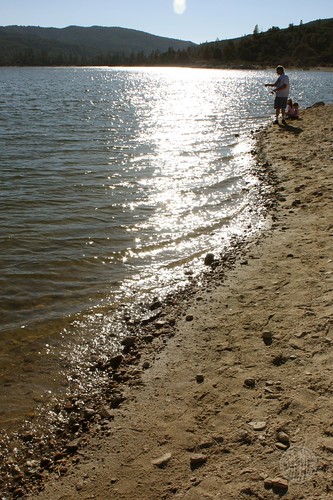 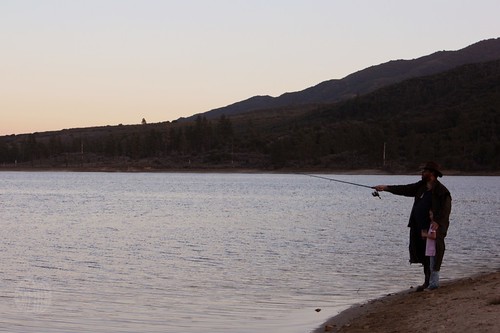 The sun went down and suddenly we remembered that it’s still March and not July. We huddled under coats as long as we could take it and then packed up for home. 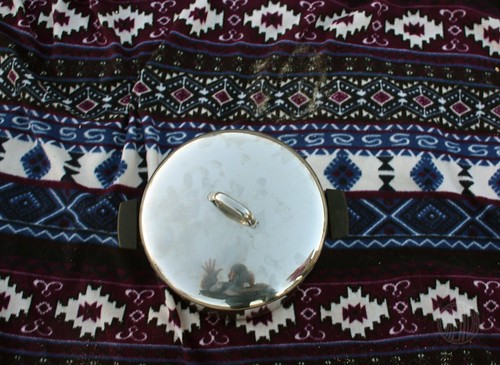 It was a great day. Just like my Dad always says, “The worst day fishin’ is still better than the best day workin’.”