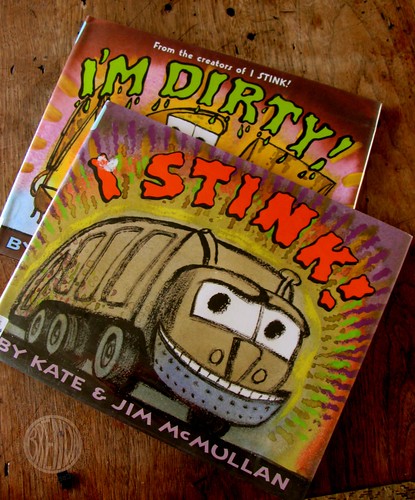 When we go to the library I always peruse the kids’ new-books section. The books probably aren’t all that new since our library is the size of a shoebox and hardly ever gets new books but hey, it’s close enough to walk to so we don’t complain! I look for books that are interestingly illustrated FOR ME. Not for Bug but for me. Why? Because I like to dissect how the illustrator created them. Did they use watercolor? Pencil? Dry brush? Is it printed in pantone or process? Woodcut? Stamping? I learn a lot about illustration from kids books.

My second rule for what books we check out is whether or not the books have too many words on a page. Just like my rule for ordering a latte at Starbucks, if you can say it in five words or less it’s better. While I like the idea of reading chapter books to Bug someday, we are unfortunately still at the less-is-more stage of her attention span. I hate reading books to her at night that have paragraphs and paragraphs on each page. She gets bored easily and next thing I know she’s climbing over my head and nobody’s getting sleepy besides me. If they rhyme, even better. 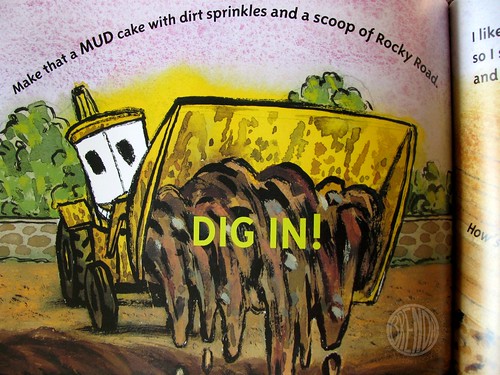 Once in a while we find the perfect book. Not too many words and amazing illustrations for me. Sometimes Bug likes that book too and than we read it over and over and over multiple times every night. Right now we are totally besotted with the I Stink books by Kate and Jim McMullan. We have two of them checked out from the library, I’m Dirty and I Stink. 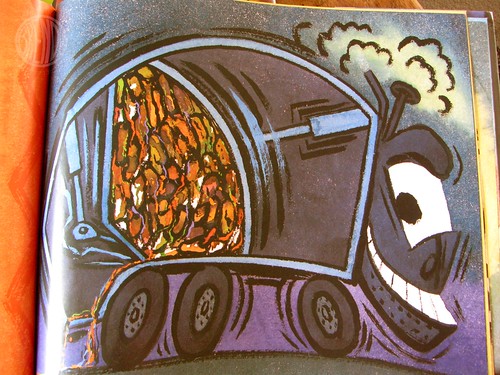 They’re so funny. They have rhythm. They are fun to read and look at. I think I need to start an Amazon wish list for Bug and put these books on it because she just can’t get enough of them. She walks around using the phrases from the book. It’s I-Stink-mania around here lately.

It’s kind of funny that Bug should be so in love with such boyish books right now since she just recently informed me that her “asteroid shoes” (the faux Vans with TI Invaders on them that I think are downright adorable…) are for boys. Hmph! I said. I like your asteroid shoes. But she will not wear them. She still likes green over pink but she will only wear her flowery “Easter” shoes that Gramma Sugar bought her. Whatever. Kids will be kids. I’m guessing my days of dressing her as a tomboy are numbered…or are they? Who knows. 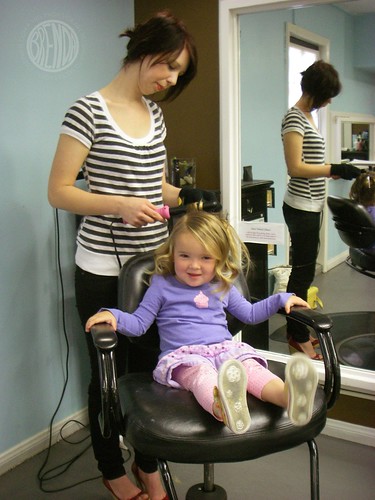 The other day when we got our hair cut, I was mildly amused that she wanted her hair curled like a princess. Since when does she like princess hair? Maybe that trip to Barbie-land rubbed off on her. 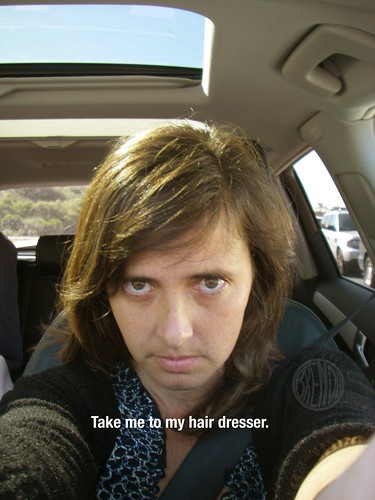 As you can see, I needed some princess hair myself. Or at least I felt like I needed a hair cut or something. After I was at the salon and my favorite hairdresser pretty much told me that my hair is healthy and only needed one tiny millimeter cut off, I realized that maybe it’s not my hair that is the problem but instead the hair-wearer. But nonetheless, a trip to the hair dresser was needed if only for the shampoo massage! 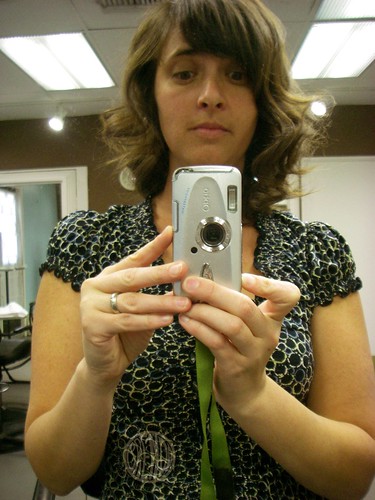 After my hair was all cut (which took about five minutes) my hair dresser curled my hair with a fancy-dancy pink armless curling iron. It was quite tricky to work and she had to use some sort of glove-mitt thing to hold the hair on it. It looked like a major pain in the neck but I let her do it because I figured I should get my money’s worth. Haircuts are not cheap! 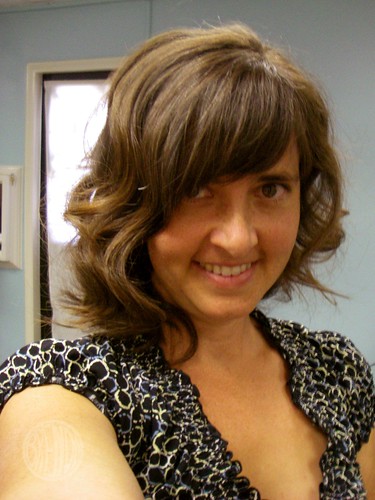 I’ve never had my hair curled like this. It made me feel all feminine and fluffy. I wanted to flounce about and have a tea party. One of these days I’m going to remember to get a haircut before I have to go somewhere. It’s such a shame that this nice hairstyling was wasted on the grocery store. But such is life. 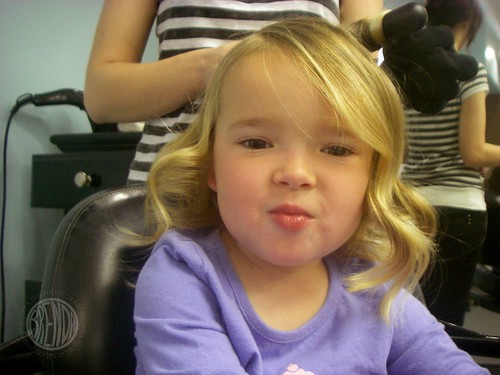 Pretty hair was not wasted on Bug though. Everywhere we go is an event for her. The grocery store especially. She loves shopping with her little cart. Everyone stops to say hi to her and tell her she’s cute. She eats it all up while I roll my eyes and prompt her to say “thank you.” It’s only good manners after all.

She’s pretty good about saying thank you. She just waves and says, “thanks.” Probably in defiance of me. But that’s okay. At least she isn’t throwing herself down on the floor or hiding in the detergent aisle like she did that one time when the little cart was missing. She loves that cart. If I wasn’t such a stickler about clutter, I’d buy her a little cart to push around the house. But I’m not going there. Nope. We have enough stuff for her to bang around the house. I have bruises on my legs to prove it. 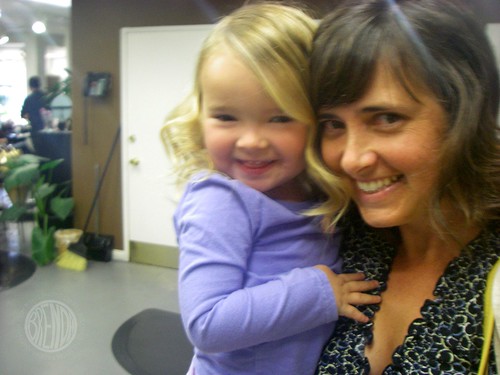 So that’s that. We are happy curl girls. Or at least we were for about 1.5 hours. That’s how long I lasted before I put my mop in a ponytail and Bug’s curls fell out because she inherited her dad’s stick straight hair. 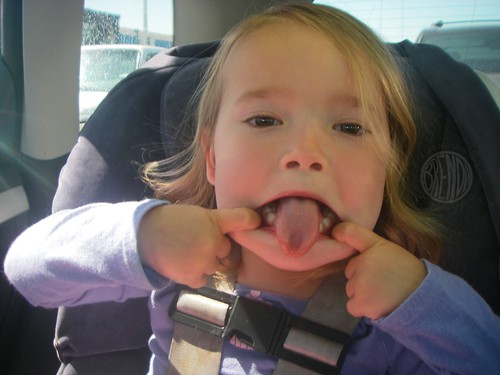 I’d write more but it’s almost 2 am and no matter how hard I try to come up with a neat ending, it’s just not going to end neatly. So Blah. We’ll end it with that.