posted in artsy fartsy, Bug, painting on November 3, 2008 by SAJ 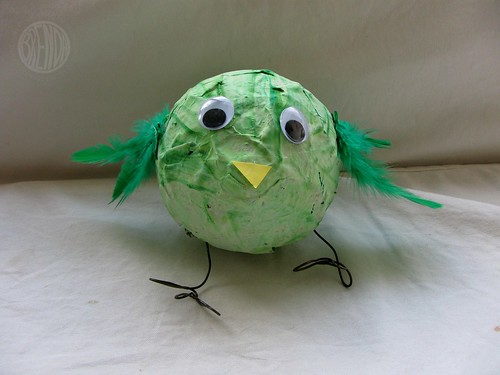 Greetings from the sick desk. Funny how last week I couldn’t wait to write about all the fun we had with the alpha+mom projects but now that I’m slogged over the head with the snots, all I really want to write is, “Hi. See you next week. Pass the Kleenex.”

But I wouldn’t do that. I’ll just drink my big cup of coffee and plow on through. Coffee is my answer to everything and yes, I know I would probably feel better if I stopped drinking it. But that’s not going to happen. At least not this week with the time change screwing with my head. If I ever stop drinking coffee you’ll know I’m either very sick or pregnant.

Last week we made a paper maché turkey. It was a blast. So sloppy and messy yet fulfilling. I took a sculpture class at our local community college a few years before Bug was born and I always forget how much I love working in 3D. You think you have it perfect and then you turn your sculpture a few degrees to the right or left and lo and behold there’s an arm where a belly button should be!

It’s challenging but freeing at the same time. I think it works parts of your brain that wouldn’t normally be used. Sort of like that drawing-upside-down trick. If you can turn off the voices in your head that tell you a house should have a triangle roof and the sky should be blue, then your artwork comes out ten times better than you expect. Bla bla bla. 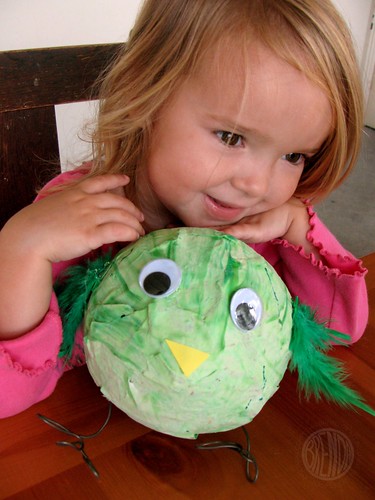 This post is not about left brain vs. right brain, it’s about Bug’s turkey! Her turkey was green OF COURSE!!!! We named him Tweet. Cute, no? 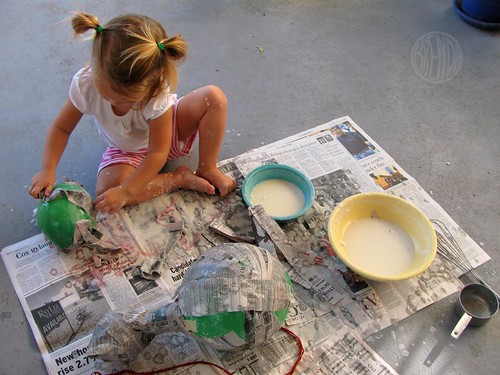 I had to sort of “fix” her floppy strips of soggy newspaper when she wasn’t looking but she definitely got into it. In fact later in the day she kept referring to our “balloon newspaper” project over and over. I think it made a big impression on her. Kids really don’t care about the end result. It’s all about the process. And believe me, this process is about as hands-on dirty as you can get. I’m glad we didn’t have any permanent pigment thrown into the mix or it might have been a little too much mess even for me.

The thing I didn’t realize is that when flour and water and salt combine and then dry they really do create glue. Glue that sticks to your patio and carpet until you get down on your hands and scrub it off with a fork and eight gallons of elbow grease! Shizer! I still have bits of white crud stuck in my carpet and I had company on Friday that I had to clean up for! It was bad.

So, that is my warning to you: If you want to do paper maché, stay on top of the drips and drops and don’t let them harden and become tomorrow’s worst enemy. Maybe it’s not that bad. I just don’t like cleaning as much as I like making messes so I wish I had been more mindful as I was going along. I’m so used to just hosing paint off our patio with no effort that I didn’t really expect the hard labor scrubbing that came later.

One other thing: Paint. We were on a deadline when we did this project so I didn’t really have enough days to let things completely dry and harden. Then on top of the birds not being completely 100% dry, I used cheap kid paint to paint them. I think the water content in the kid paint is higher than my regular acrylics and that didn’t work well for me. It actually weakened the paper structure and when I punctured my turkey with the wire for feet, the balloon inside contracted and sucked the turkey in with it. It was a panic moment.

Thankfully, I was able to cut a large enough hole to fit my hand in and mold the turkey body back to it’s original un-dented form. But it was a close one. I think if I was working on something smaller, it would have been doomed. My second bit of advice, let it dry completely and use the good paint. 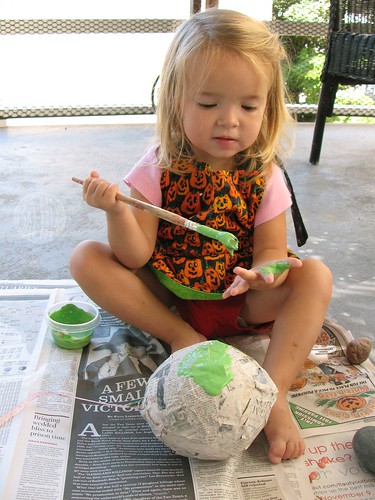 Since we let Bug’s piñata sit for an extra day, it was fine. No crazy sunken-head birdy for her, good thing! We painted him up, glued on some googlie eyes, a paper beak and some feathers and he was done. 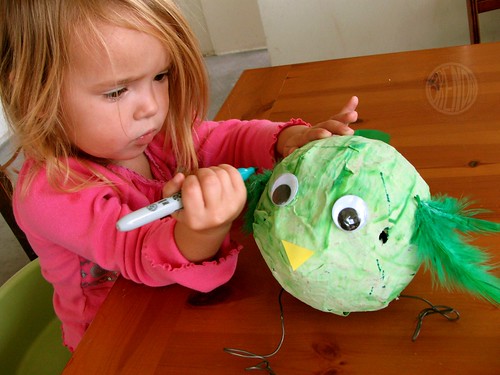 I let her color on him with a Sharpie (I love living on the edge!) and she promptly punctured a hole in the poor bird with her pen. Then later when I was off doing dishes or something and the birds were sitting on the coffee table on display, she pulled off all Tweet’s feathers and stuffed them in that same hole.

What can you do, right? Kids will be kids. All I can say is that it was a fun project and it used up several hours that would have otherwise been wasted watching tv.