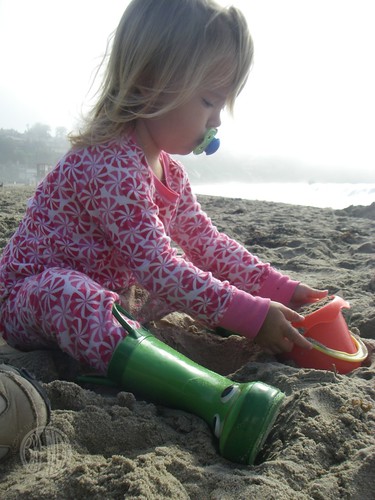 We went for an early morning beach walk today, as we often do. We don’t really have a regular routine. (Sorry, stalkers.) Sometimes I’m just sitting on the couch, groggily tuning out her pleas for a breakfast of gummy bears and the light hits me from the window with a call to action. It says, “Get off your butt and take some pictures!”

I always try to obey the light calling me. Ever since there was that one time when the light was so perfect and I was able to take that photo that came in handy for Christmas cards. I can’t really describe it. It’s just brighter, glowier, magical… something like that.

Other times I just want to get out of the house and get a latte. The beach just happens to be on the way home from Starbucks. Tough life, I know. 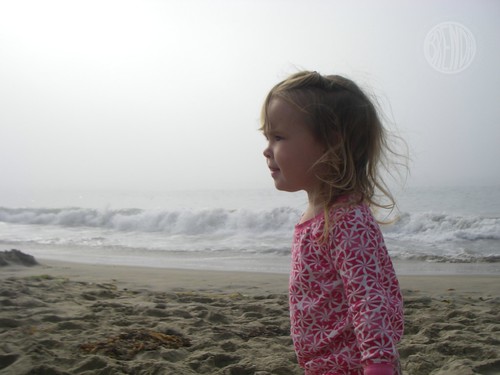 Just as we got to the beach, the fog started rolling in. It wasn’t that perfect morning light that I was looking for but it was something else entirely magical itself. Fog is nothing new, it always comes and goes, but I love it. I always say it makes my beach private. It keeps away the hordes of beach-goers and kind of soft-filters all the harsh edges of things like the encroaching McMansions and ugly dumpsters full of the weekend’s rubbish. You feel like you are a dancing in a fairy’s meadow or flouncing around in clouds with the Care Bears. Maybe that’s a stretch but you know what I mean. 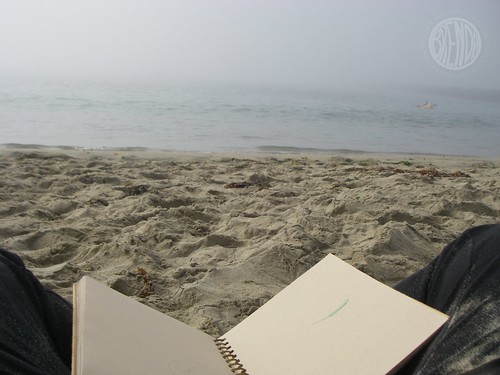 I’m so glad I finally finished up the first book of the Twilight Series and I haven’t gotten my hands on the second one yet so I can actually spend moments like this at the beach not absorbed in the lives of Edward and Bella. I’m rolling my eyes too. I hate it when I jump on the pop-culture bandwagon but I had to know what all the fuss was about! 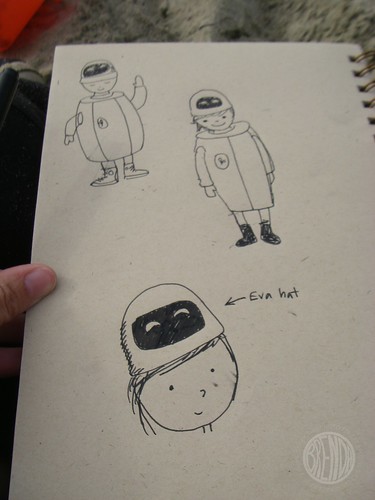 So I sat on the beach and sketched all the other things my brain is filled with. You guys can discuss Sarah Palin and global warming and I’ll be over here in la-la-land thinking about Eve costumes. You know, the robot Eve (or as we call her, Eva) from the movie Wall-E? We’re obsessed. 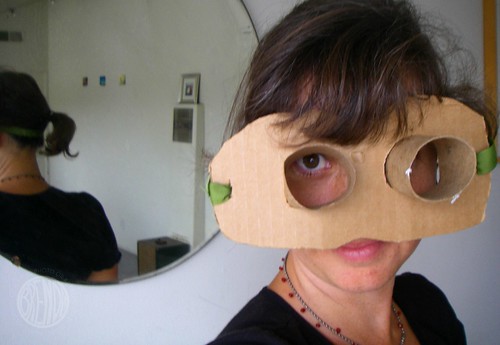 Which is sort of funny to my sister-in-law CC, who reminds me frequently that I was the blowhard who said my kid would never prance around in Disney character costumes. People who don’t have kids should never make statements about parenting, that’s what I’ve learned. Because everything I once said has come around to bite me in the butt.

Wall-E is technically Pixar. There’s a huge difference, right? I love Wall-E. I think I’m going to have to qualify my earlier statement about Disney characters and say I just don’t want her to like characters that I don’t like. I’m the boss here. 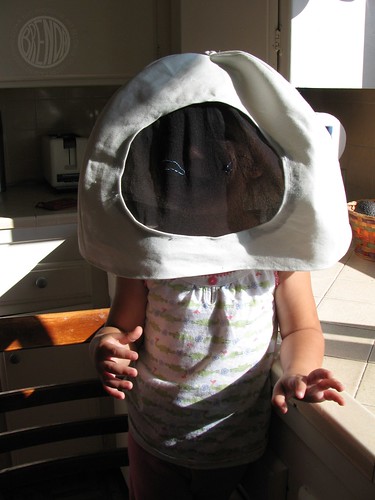 The beanie cap idea (a white cap with felt sewn on for her black face panel and blue eyes) is actually idea number two. Idea number one made it to production but was rejected by Baby Bug. So I guess I can share the big secret of how I made this incredibly creative Eve head number one that has been rejected so wastefully.

You see, I’m on a strict budget these days and I have to make everything out of things I already have. It’s hard! I hate it! Money, why can’t you grow on trees!? Why can’t some neighbor throw out something modular and plastic that would be perfect for an Eve costume? (Trash-digging is totally acceptable now. It’s very “green.” It’s called foraging now.)

I rustled up some of the old couch-cover fabric (of which I have plenty) and then searched the house from top to bottom to find something mesh and black for the face panel. It had to be see-through. Hmmmmm… what could I use? There is nothing in my house that is black and see through!

You probably guessed it. The elusive and yet perfect fabric was in my underwear drawer. Don’t be grossed out. They were very very very clean and barely worn black Victoria Secret panties. I didn’t really like them anyway. Snip snip snip and the back panel became the perfect Eva mask! Yes, my butt is that big. So yeah, poor Baby Bug had to look through the same material that my butt cheeks use to sit in so cutely. But it was so perfect! Where else am I going to find something so perfect for free?!

Too bad Baby Bug won’t wear it. I guess nobody’s going to buy it on ebay now that my secret has been revealed. Pffft. Oh well, it makes an interesting story. I’m getting used to my ideas failing anyway. I have a feeling she won’t wear any costume I want her to wear and will want to be a princess like her cousin when Halloween actually shows up. I’m prepared for the rejection. It happens every day when I try to get her dressed. 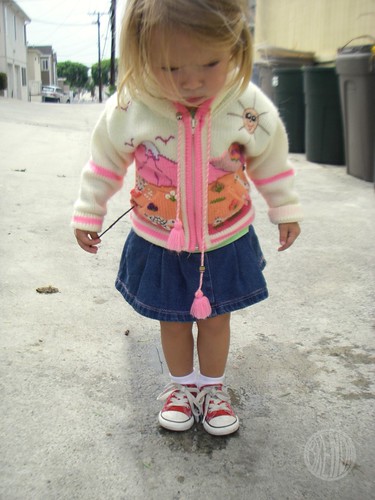 But I really want her to be Eva. Doesn’t she look like Eva? She’s got the eyes down.

I figure I might as well blog about it anyway since I get a ton of traffic over the whole merbaby costume. I might not get to see my idea come to fruition but that doesn’t mean somebody else can’t. Just don’t tell anyone where you got the black mesh fabric from. 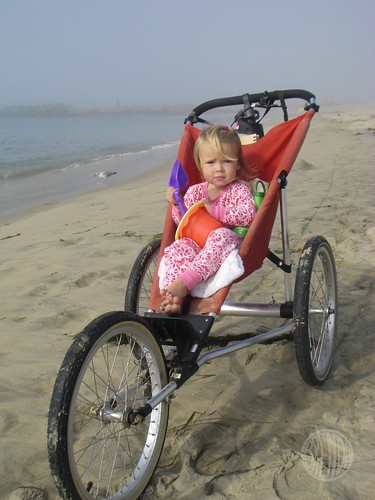 Back to our foggy morning walk.

After I sketched a bit and Baby Bug made a castle or two we both decided it was time for some real breakfast and headed home. Except the tide was really high and that meant I had to push the stroller high up on the beach along the bumpy dry sand instead of the hard-packed wet sand. With all the fog it felt like I was pushing a moon buggy on the moon which is kind of cool but a whole lot more work. 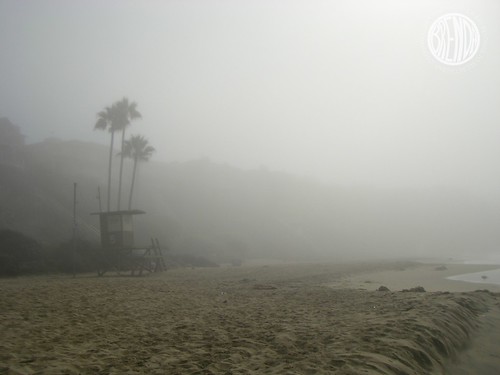 I like to think I’m a local and I can time the waves just right. I know all about sets and how usually three small waves are followed by three big waves. So I took a liberal risk or two onto the wet sand and then totally got washed in by a big surprise wave! Arg! Pants and all. 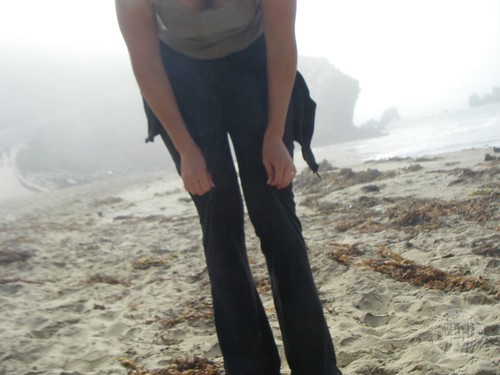 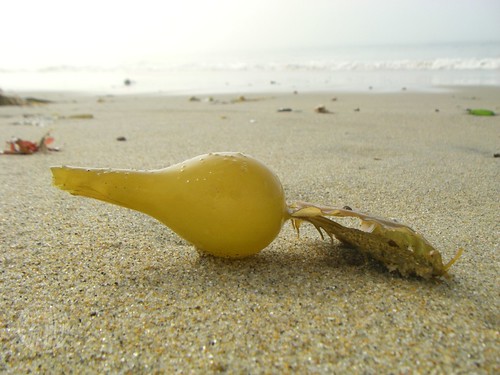 I may have been distracted from my vigilant wave-watching while trying to take a photo of this sea kelp bulb. I just wanted to capture how they glisten on the sand like little jewels waiting to be crunched with a satisfying pop under your grippy rubber running shoes. It’s the BEST feeling ever.

There is so much more seaweed on the beach this year. Tons of it and I love it! I don’t like the smelly seaweed or the flies that float in clouds above the clumps of seaweed that gather on the sand but I do love stepping on these poppy bulb things. It’s better than popping bubble wrap. If you don’t believe me, I’ll send you one in the mail—if you pay for postage of course, which could be expensive due to the “nothing liquid, breakable or perishable” rule.

Just take my word for it.