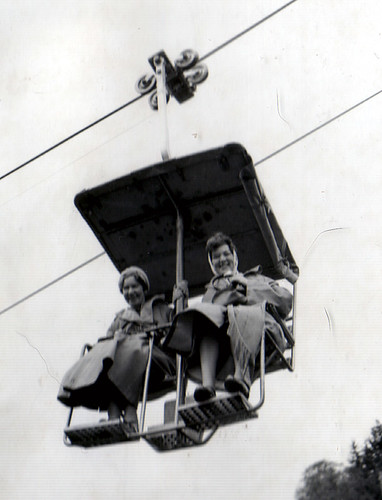 This post is from my most favorite commenter from the UK! Thank you Lynne.

Growing up in rainy North Wales in the 1980’s I didn’t have any surviving grandparents, but I did start life with almost a football team’s worth of great aunts. Born at the latter end of the Victorian era, these ladies have left me with warm, vague memories of black dresses, piled-up white hair, dark linoleum hallways, jelly babies, weak orange squash and kind faces that were always happy to see me.

My two youngest great aunties were very different in their outlook, and looking back I see they influenced me hugely. Great Aunties Minnie and Winnie (Mary and Winifred) met in the early 1920’s while training as Nurses in a Liverpool Hospital. An unlikely friendship developed between the two. Winifred was tall, dreamy and fond of poetry while Minnie was short, deft in her movements and often had a sharp tongue, always speaking her mind.

Auntie Winnie compared the hospital to boarding school. The Matron was strict and overbearing, reprimanding the trainee nurses for the least little misdemeanor—like having your nurse’s hat a little askew or a smudged apron. Early on in her training, angry at being publicly rebuked, my Auntie Minnie wanted to storm back home. Matron reminded her how much her mother would have spent on her uniform. Auntie Minnie stayed. I’m glad to say that the girls did have some forbidden fun, escaping after lights out through the bathroom window to enjoy the delights of Liverpool’s music halls. I find it hard to believe my conservative Auntie Minnie ever climbed out of the window. Maybe she was the one who let the daring girls back in?

After training, the girls remained friends and became companions throughout their nursing life. Winnie, although not a blood relative, became a much-loved adopted member of our family. She was always a welcome visitor to our family homes both in Liverpool and Wales. Minnie was always helping Winnie out of scrapes, as her vagueness often got her into trouble

One such story is set during wartime blackout. Minnie returned home to find Winnie in a high state of anxiety declaring she had seen a ghost. Minnie being practical-minded knew there must be an earthly explanation and marched Winnie back to place where she has seen “the ghost.” It turned out to be a white statue shaded partly by trees, eerily pointing at my aunties through the pale moonlight.

Another time when Winnie was learning to drive she got caught up in a funeral procession. She thought it would be impolite to overtake the hearse and found herself arriving at the graveyard with the deceased family with everyone wondering who she was. (This might be a family habit as my mother and her sister, to their embarrassment, also unexpectedly found themselves guests at a stranger’s funeral the other week while visiting a church). 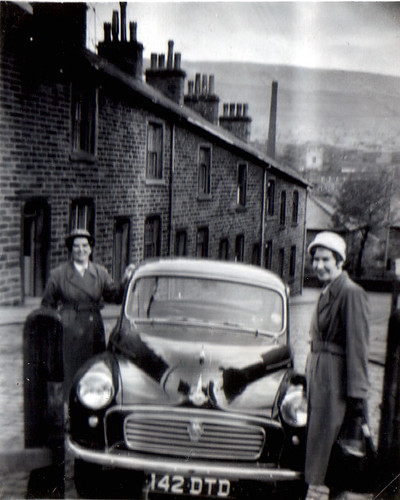 Only one quarrel marred their friendship of over 60 years. Minnie had a younger brother, my Uncle Griff: a seafaring, hard drinking, ne’er-do-well sort of man with a pure heart of gold. Unbeknownst to anybody, Winnie and Griff had fallen in love. Nobody knew a thing until one day a telegram arrived saying Winnie and Griff had eloped! Aged 40! Well the story goes that the womenfolk at the Liverpool house had hysterics. My poor Auntie Winnie was denounced as a “scheming woman” who had stolen their baby brother away. Winnie and Minnie did not speak for over a year.

All that was long in the past by the time I made my arrival in the mid 70’s. By then Minnie, Winnie and Griff were all living together in fairly gracious harmony in a spacious two-bedroom bungalow. Every Friday after school I would go and visit them. Minnie ruled the house, still waking at six to start the day’s housework. Uncle Griff tended the garden and sneaked sips of whiskey from various bottles secreted around the house, shed and garden, winking at me to keep his secret as he wasn’t supposed to drink.

Winnie taught me to love poetry. I can still hear her soft voice reading to me while I sat on her knee, the tweed material of her skirt prickling my bare legs. Poems from The Golden Treasury, Greek myths, school stories from her own Edwardian childhood. We would go walking over the fields with a neighbor’s Red Setter for company. I can see her in my mind’s eye, still tall and lithe aged 80, walking over the September fields wearing sensible tweeds and brown brogue shoes, the dog bouncing along at her side.

During the winter she used to delight in making tapioca pudding to warm me up. I hated it. It looked, tasted and had the consistency of frog spawn. But I never let her know as I knew she made it because she loved me and I never wanted to hurt her feelings.

Sitting at their kitchen table they plied me with tea, cake and socialism. Both women had seen the misery that poverty and ignorance wreaked while working as a midwife and children’s welfare nurse with the poor of the city of Manchester before the days of the Welfare State. As a young teen they impressed on me the importance of leaving home and finding my own way in the world, despite the fact my parents wanted me to stay at home where I would be safe.

After long and useful lives, my beloved great-aunts both died by the time I was in my late teens. Auntie Minnie wasn’t sad, she was tired. She said she was ready to go, practical as ever to the last. Auntie Winnie became even vaguer, slowly forgetting who we were. Always pleased to see me, I became my mother who she had known as a child. Sitting by her side, I read to her the poetry she once loved as she no longer had the memory to remember storylines.

Don’t be sad though, as they taught me so much. Old age can be gracious, friendships can develop between people of different age groups, a good book is an excellent companion, walking through fields in September sunshine makes you feel glad to be alive, and most importantly, have the self-confidence to go out into the world and make it your own.

I still miss them but I am very blessed to have known them.