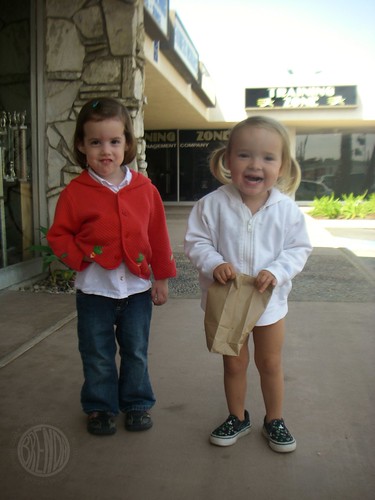 This is Baby Bug’s good friend, Audrey. They love each other. They get along really well. It’s almost eerie. I can have a complete conversation when Audrey is around because Baby Bug is not interrupting me every five seconds. She’s off telling secrets or having laughing contests. I don’t think they’ve squabbled over one thing in the entire two visits that they’ve spent together. Maybe two visits isn’t long enough to judge by but Baby Bug has fought with other kids in less than two minutes so I’m thinking it’s Audrey.

It helps that they are only two weeks apart in age but I think the real reason they get along so well is because Audrey doesn’t mind getting bossed around by Baby Bug. Audrey is a little sister already and she is used to it. She likes it even. Maybe she misses her big sister, who is off at school, and is happy to have an event coordinator back in her life.

While Baby Bug talks up a storm, Audrey is very quiet and shy. She understands every word Baby Bug says and is more than happy to tag along with her to do whatever Baby Bug wants. I can see in Audrey’s face that she is happy to have someone who understands her and will act as a mouthpiece for her.

I’m not saying that Audrey doesn’t talk or that people don’t understand her, because she does talk and she is understandable but I get the feeling that Baby Bug is almost an interpreter or a louder spokesperson. Baby Bug is really good at letting the whole wide world know what is really going on inside a two-year-old’s brain. And believe me, there is a LOT going on inside two-year-old brains. I think Audrey likes that.

Whatever the reason, I think Audrey should come over everyday because it’s so nice for me not to be bossed around all day!

There is a park behind the laundromat for Baby Bug to play on but it’s always like pulling teeth to extract her from the sandbox or the slide or the tiny pieces of grass that she is inspecting so I can go take my clothes out of the washer before the mumbling guy with schizophrenia steals them. Then there is the door she could run out of and into a car driving by or the scary germs all over the floor that she likes to wipe her pacifier along…my point is that usually laundry day is difficult. A long difficult struggle with wet clothes and my bossy kid.

But yesterday? Laundry day was a dream! The kids loved the washers and depositing the coins. It was a game! They had discussions about what was swirling around in someone else’s washer. Was it a wet sheep? It sure looked like a wet sheep. Then when the washer switched cycles and the sudsy sheepskin folded in half, away from the washer window, they both jumped back as if the sheep was really alive! It was pretty funny.

They both helped me quite a bit, carrying over wet laundry to the dryer and just generally being delightful little girls. I would have taken more photos of them being adorable but I was too busy blabbing my heart out because for once I could have a real conversation with another mom without being interrupted! The bliss! Who knew!? 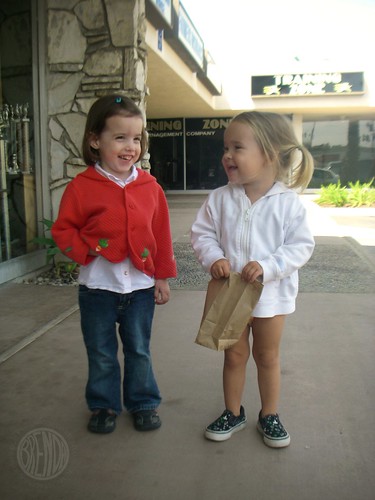 So yeah, that’s my kid with no pants. There’s a story behind that of course. Even though I let her go without pants at home, I usually try to keep her clothed when we are in public. But there was a slide with water on it. You know how that goes. The sprinklers got the playground wet or the dew hadn’t quite dried off in the sun yet. It’s always like this for us. You’d think one of these days I’d pack a towel to dry off the slide before she goes down it. But no, I never learn.

She went down the slide and got her adorable skirt and black and white striped leggings wet and that was the end of that cute outfit. Plus, there were other kids at the park playing in the sand with no shoes on. We had a little battle over why she had to wear shoes when they didn’t have to. So I gave up the skirt and leggings in exchange for her keeping on her shoes because that park is a little sketchy. I affectionately call it “Drug Dealer Park.” She can run around and look like trailer trash but she will not step on glass or a hypodermic needle in bare feet under my watch. Okay, the park is not that bad but I have to be the boss on some things. I draw the line at shoes.