posted in guest posters on September 4, 2008 by SAJ 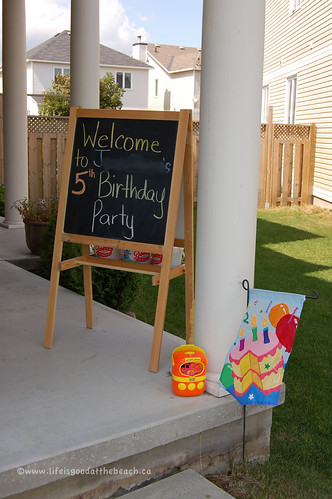 This post is from Anna (or Beachmama as most of us know her) from Life is Good at the Beach. Thank you, Anna!

We had a celebration at our house recently. It wasn’t just that J was turning five—I mean, five years old?!? Where on earth has the time gone?—it was also that he had been introduced to school-enhanced birthday parties. In the past our parties had consisted of family and close friends. But this year we had to compete with a whole year’s worth of parties. Ever since J went to his first one in February for his best bud, all I have heard is, “When I am five, I get to have a party and it is going to be like….” J would change the details often.

As July was halfway over, we really needed to nail down the plan for the party. Up until now, all his friends’ parties had been at some sort of play place. The one that J actually liked was moving and changing format just before his birthday. It changed from a gym-type place to a place with tunnels, not J’s strongest suit. He did not want a tunnel party. We went back and forth on what to do. Finally I came up with the suggestion of having Ray’s Reptiles Zoo come to our house to put on an hour-long display of reptiles for him and his friends. J was over the moon. 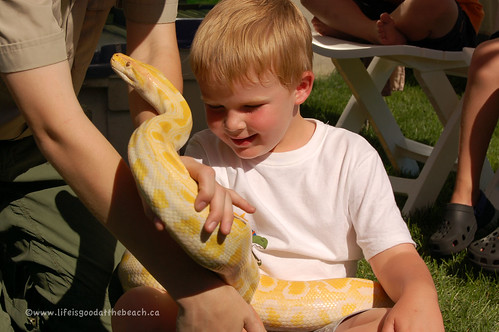 Towards the end of July we started working on the guest list. J gave me a list from the top of his head. It included a bunch of friends from school, his cousins and a couple of friends not from school. We went through the list for about a week, discussing how many people we should and could have, and how many would possibly be away on holiday. Most of his cousins live far away, so they were scratched. His friends from school changed once or twice, but for the most part were consistent and the ones not from school changed a bit too. J was worried they wouldn’t know anybody and I was worried about a house full of kids on a rainy day.

After we finalized the list, I started to think about invitations. Since I cannot draw, I decided against making my own. I downloaded some invites from the Ray’s Reptiles site and got a little creative with Photoshop so they were customized for our house. I printed them on cardstock and put them in envelopes that J decorated with stickers. I got the list ready with all the addresses, prepared to start dropping them off with plenty of time for responses. Then my uncle passed away in Delaware. We had already been down for a visit and knew that he wasn’t doing well, so we were waiting for the call. With only two days to get us packed up and ready to go, I decided it would be so much easier just to mail the invitations. That and I know how much J loves getting his own mail, so his friends would probably love it too.

We were gone for a week and a day. One night while we were away, Apple woke me up and I lay awake for almost three hours in the middle of the night panicking about how I was going to pull this party together on my return. The next morning I wrote a list of what I needed to do when we got home. That was a start.

We got home and I instantly went into planning mode, checking the messages and emails to see who was coming, sorting my lists by store and necessity. I ordered one cake for the grown-ups and decided on a Rice Krispies cake for the kids. I picked up all the party food, some chips, some cheezies, and some healthy choices too, like carrots, grapes, and cheese. It was noon on Friday and I had accomplished a lot. On to the game-planning. 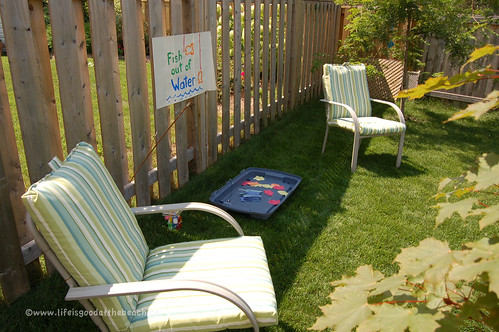 At first I was thinking of old-fashioned games like pin the tail on the donkey and potato-sack races, but then I remembered I had a Martha Stewart Kids Magazine that had a carnival-themed party in it. And since we had just been at our favorite beach with rides and games I knew J would love it. I copied all of her games: Clothespin Drop, Ball Toss, Spray Away (spray ping pong balls off of gold tees with water guns), and a fishing game. I was still going to do pin the tail on the donkey, but couldn’t draw a donkey to save my life so I switched it to tug of war.

Saturday came around and it was time to start setting up. We borrowed a canopy and outdoor chairs from my parents and set them up in the backyard. The weatherman was still calling for possible afternoon showers, but I was determined to have the party outside. I prepared the loot bags and painted signs for the games.

Sunday morning was bright and sunny. We were up at 7am and the kids were coming at 2pm. I got to work inside first, cleaning and preparing the snacks for the kids. Then we set up outside. I was done at 1pm, and had an hour to spare. This, for me, was a miracle. I never get everything done with an hour to spare. Apple was asleep and Hubby and J went out to pick up the stuff I ordered for the adults. I sat down for a few minutes and prayed that all would go well. There were going to be 13 five-year-olds and two kids under three. My mom was taking Apple and none of the parents were planning to stay. In the end we had one mom stay and A (my 16-year-old stepson) was geared up to help.

The doorbell rang and the party began. The kids headed outside and went straight for the play structure. After a few minutes of fun they headed to the games. All the games were a hit. The kids tried them all and loved that they got a little prize at each station. I got a bunch of stuff from the local dollar store, so each child got a little something for his efforts. About a half-hour in, one of the boys started with the water guns. I tried to keep them from shooting others and telling them they were for the games, but somehow J had found his stash and had his Dad and Brother filling them from the pool. We had a full fledged water fight on our hands. It worked out great because it was getting hot and the kids needed to cool off. Fifteen minutes of water guns was just enough time before the lady from Ray’s Reptiles arrived. She did a great job of quieting down the kids and keeping them watching for a full hour. J, who is not always so brave, was touching scorpions, snakes, tortoises and caymans. He even wore a snake as a belt. 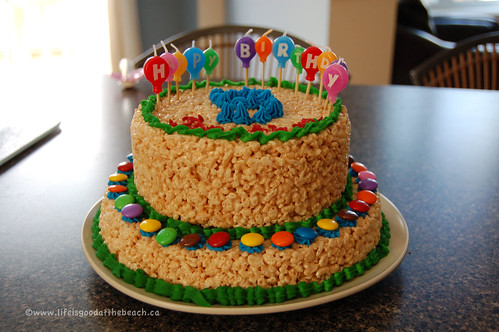 We were originally going to have the snacks and cake outside, but the sun had stayed strong, so we thought it best to bring the kids inside. We had a few minutes of chaos while we tried to set up the table inside and get them all seated. But they filled up and had cake and freezies and then it was off to open presents. I seriously don’t know how the teachers keep them all quiet in school. I could not even keep them settled for that twenty minutes. J got a good variety of toys from all his friends who were just so excited to watch him open them all up.

After the presents were all opened, we quickly sent the kids back outside to wait for their parents. They went straight for the water guns and the play structure. And the parents all arrived by 5pm to collect their worn-out, happy kids. And it was great for them to get together again right before school started up. Truthfully, it hardly seemed that they had been away from each other for six weeks already.

That was the first, but most likely not the last, party at our home with all the kids from school.