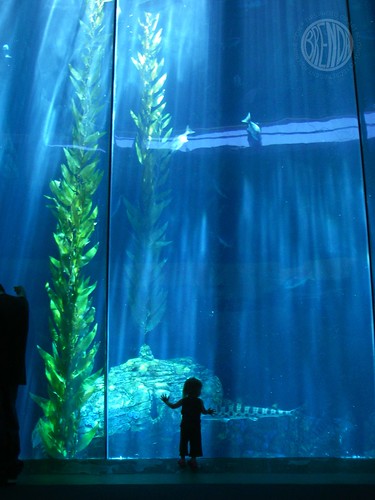 The other day Baby Bug and I went to the Long Beach Aquarium of the Pacific with Whoorl and her family. We drove separately and then got lost and only really hung out with Whoorl for an hour or so but it was really really fun. I love going places, just Baby Bug and me. I feel like we are a team. We do everything together.

It was kind of funny because I royally got us lost in downtown Long Beach. (Is this a theme with me lately?) Not in Snoop Dog’s ‘hood but in the general Grand Prix race area. I followed the Aquarium directions carefully but they didn’t take into account the restructuring of the whole map due to the big race that is coming up. The directions were useless. Signs for the aquarium itself and parking for the aquarium led me straight into a cement wall. They’ve blocked off the track for the race already and everything is screwy.

I finally parked in some high-rise parking structure with no idea where I was. I headed off towards the building with whales on it, thinking that was an obvious place for an aquarium to be, and ended up in a ghost town of closed businesses and loft style apartments. Everywhere I looked everything was under construction. Roads were blocked off with chain-link fences, cranes were lifting up huge heavy sections of cement. Oddly, with all this construction activity, there wasn’t a soul around to ask directions.

I finally flagged down a guy on a bike and asked him how to get to the aquarium. I think he looked at me hoofing it across multiple lanes of traffic with a squirming toddler in my arms and decided to give me the easy version. He told me to catch a free shuttle and wait for the appropriate stop.

So I did. That was kind of fun for Baby Bug and me. We’ve never ridden a bus together before. Baby Bug thought it was more fun that Disneyland. A ride with no seat belts! Wheeeee! 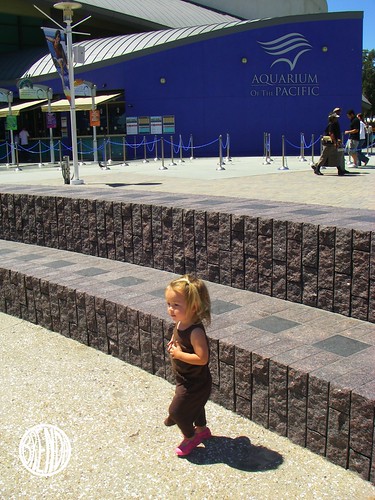 We rode around on the free shuttle for about twenty minutes and finally ended up at a building that did not have whales on the side of it and that was our stop. Who knew! It also seemed suspiciously close to the parking structure. Like we had ridden around in a circle, stopping every five minutes to pick up new passengers and here we were. Perhaps I could have just walked two blocks and saved myself ten minutes? But who knows. I’m not a local here. Maybe there was a freeway between the aquarium and the parking structure that you cannot cross by foot.

Anyway, the bus ride was fun and free so I didn’t think about it too much. But when we were done with the aquarium, I went outside and sure enough I could see that same parking structure building again just a couple of blocks away. It was very very strange. Was it a twin building of ours? Should I just walk that way and see?

It was too confusing. There were chain-link fences everywhere and I couldn’t tell if I could get through or not. I didn’t want to walk all that way (they were long blocks) and find out I couldn’t get through, so we caught the bus and rode the circle again backwards.

I have a feeling that we rode the bus to a further spot and then walked backwards to our car but I really don’t know. My brain is so addled with worrying about sippy cups and keeping track of eight different pacifiers that I don’t think it has much room in it for branching out and walking the streets of downtown Long Beach in search of a shorter route. Retracing my steps seemed like the best idea at the time, even if I did end up with a backache and a toddler asleep on my shoulder by the time I got to my car. 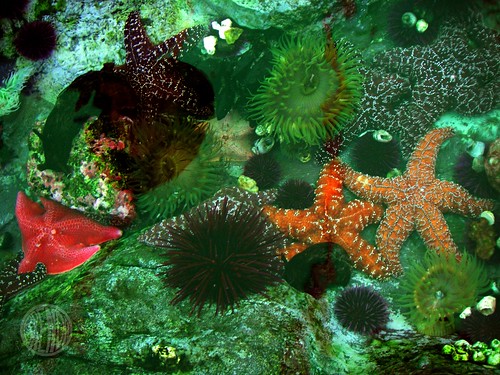 In spite of all that, I really did have a great time at the aquarium. I would recommend it for kids of all ages. A lot of it was over Baby Bug’s head but it was safe enough and small enough that I could let her run free and explore things on her own terms. Which if you know Baby Bug, you know that is the best way to do things. She hates being confined to the stroller these days. She just wants to be free like a bee. 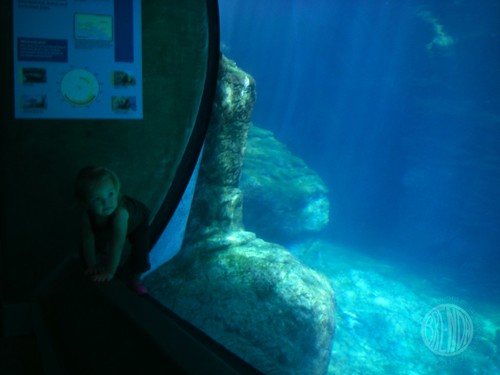 She loved climbing all over everything. I think she enjoyed the bars and steps more than the exhibits themselves. Though we did have a lot of fun looking for Nemo, whom we never did find. 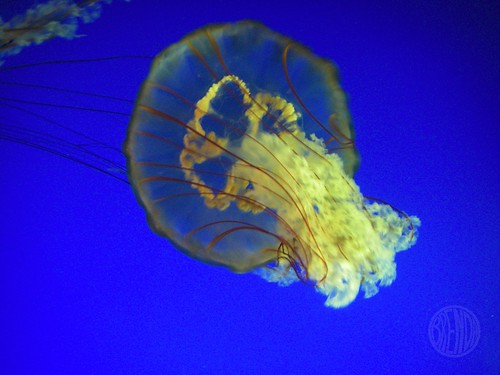 My favorite parts were by far the jellyfish and the manta rays. I could sit and watch the jellyfish for hours. They are so peaceful and beautiful the way they float around with their long strands of hair-like tentacles. They move so slowly you almost feel hypnotized by them. I daydreamed about having a big jellyfish-filled aquarium at the foot of my bed and falling asleep to their soft movements. Who needs a lava lamp? Jellyfish are so much better! 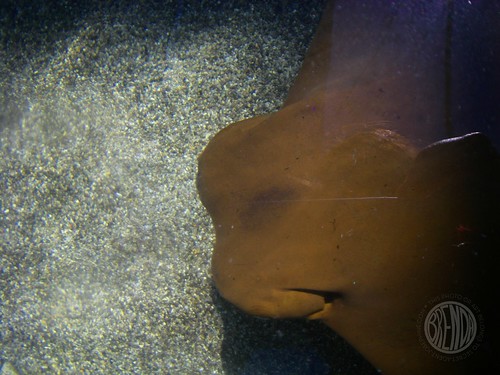 I know this photo doesn’t look like much but this is my best capture of my most favorite part of the aquarium. These are brown manta rays (bat rays) who swim around in an outdoor pond area that you can put your hand in to pet them. They actually come up to the side and want to be petted. Or at least that’s what the aquarium employee outside with the microphone said. 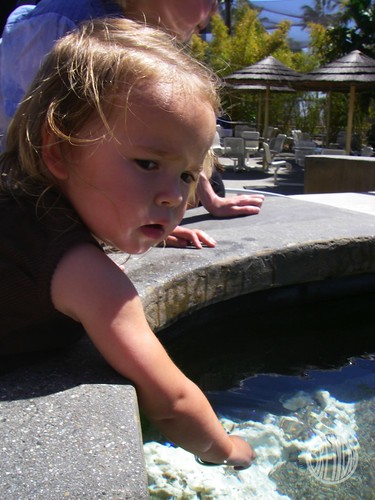 Toby had to go and ruin that memory for me by telling me that the manta rays were not being friendly but were actually just hungry. Hmph. They seemed really friendly. It was neat to touch them. Their skin is rubbery and slippery. I really liked them. The whole experience made me want to go to the gift shop and buy a stuffed manta ray so I could cuddle up with it. Maybe they starve the poor manta rays just so you will feel like that and spend money. I do not know. 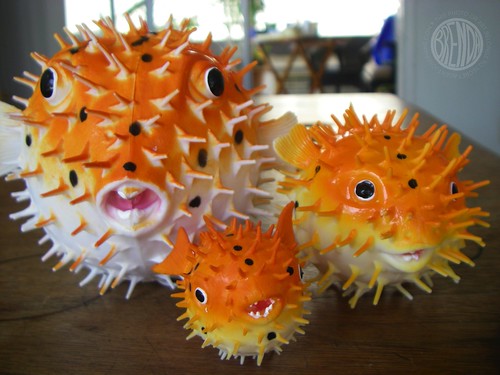 I guess it doesn’t matter since we came home with a blowfish family instead.