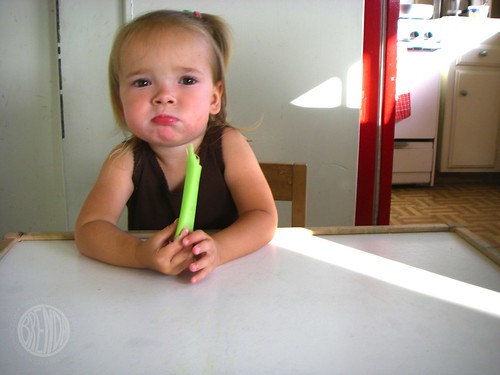 See that face? That’s the face of a big girl. A big girl who doesn’t need her high chair anymore. With much trepidation, we finally took the high chair apart and stuffed it in the coat closet. We don’t need it anymore! But it’s still there just in case we do need it, along with all those wool coats we never use.

I say all this confidently but inside my chin is quivering and I’m grasping at the last straws of my former life. Baby Bug may not need the highchair anymore but her mommy does. Especially now that I am protecting my new couch cover like it were some rare piece of China. “Don’t you get near my white couch with those yogurt covered fingers!!! Sit down at your little table!” I say over and over and over.

I miss my old life.

I know I made the couch cover so it is washable for this very reason but I just don’t want to wash it yet. I want to save that chore for some undetermined date in the distant future. Maybe after I take a course in sailing because that’s how big that cover is and I’m going to need some special training to be able to stuff it into a washing machine. What day is laundry day? The first of Pain-in-the-Neck. So let’s just stay away from the couch with that leaky sippy cup of hot cocoa. Okay? 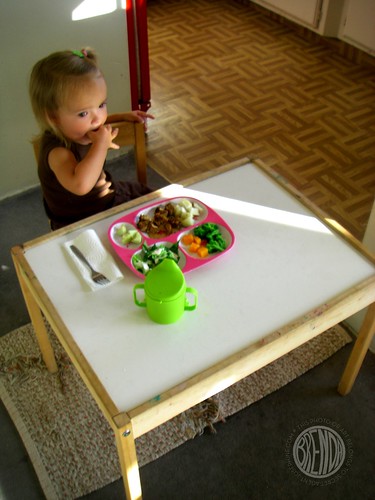 Getting Baby Bug used to the idea of eating at her own little table was easy. She doesn’t miss her high chair a bit. The problem is keeping her at her little table while she eats. It is a work in progress. A labor of love. Probably one of the hardest things I’ve done so far. But as Toby constantly reminds me, if I don’t do it now it’s only going to get harder.

Why does life have to be like that? I’m so much better at going with the flow. If only the flow would go the way I want it to go.

I had an epiphany the other night while I was out to eat with my mom, my sister-in-law and my two nieces. We were eating at a family restaurant that was moderately noisy so it was okay that the kids were acting up. But there was an elderly couple sitting next to us and every time Baby Bug shrieked (she’s been doing that lately when she doesn’t get her way) I could see them wince.

I know they just wanted to enjoy their Early Bird dinner of a shared steak, baked potato and mushy broccoli. They probably looked forward to it all week and had a coupon even. I could just see it in their faces that sitting next to the Zoo at feeding time was not their idea of a senior night out.

Sure, I know this is life and if they were nice people they would remember the olden days when they had toddlers and smile and tell me that they grow up so fast or something. But also part of me remembers being that snotty person who always vowed to have perfect children who never misbehaved in a restaurant. Yes, that was me. Feel free to kick me in the shins.

I said something about Baby Bug wanting to get down out of her restaurant high chair (that barely holds her in since she is skinny enough to wriggle out of the germ-encrusted buckle) and my sister-in-law commented that of course she wants to get out when she’s done. She doesn’t have to sit and wait for others to be done when she is at home, does she?

She was right. Baby Bug does not usually have to sit and wait. Usually, I plop her in the highchair, turn on her favorite channel on the television and nuke something nutritious for her to eat while I go about preparing dinner for Toby and myself. Then, when she’s done I swoop her off to the bathtub, Toby eats in peace and we have quality splash time.

In theory, it would be great if we all ate together as a family at the table at six-o’clock but that’s just silly talk. For one, Toby works weird wacky hours and for two; I just don’t have my act together early enough. To pull that off, I’d have to be starting dinner at three or something. I just don’t love cooking that much. It already feels like all I do all day long is plan, prepare, eat and clean up after meals over and over and over again.

Sometimes I think we should just invent a pill we can take for nutrition and be done with the whole mess. Too bad I like to eat.

So my plan is to teach Baby Bug to sit and eat her dinner at her little table. What a grand plan it is. Thankfully, Toby is on board with this plan and has spent a couple of dinners sitting in the tiny chair next to her eating his dinner too. (They make quite the cozy pair.) When she wants to get up, he is very firm. He’s so much better at that than I am. 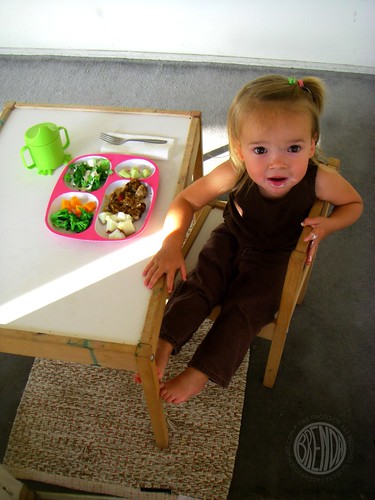 Slowly, I think she is getting the hang of it. Hopefully, she won’t develop an eating disorder over the whole ordeal. Just kidding. We’re not making it into that much of a drama. But at the same time it will be nice when she can go to a restaurant with me and sit like a big girl for longer than two minutes.

*Antilop is the name of the high chair.