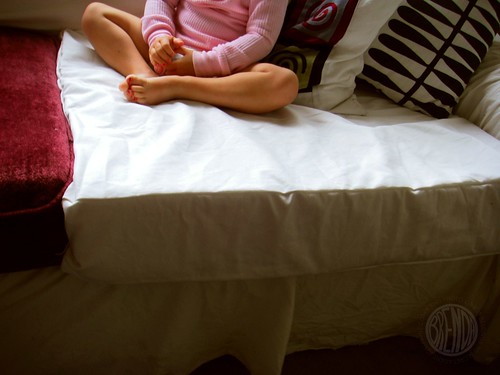 While Toby takes his sweet time to download photos from his Argentinian hunting trip and supposedly writes a guest post for you guys, I will regale you with my exciting tales of couch-covering! What? You don’t think ripping out seams and wrestling foam into canvas is as exciting as bus-capades in Buenos Aires and ducks getting eaten by piranhas? Oh. I’m sorry. I see how you guys are.

Well, too bad. If I have to wait, so do you. It might be a while so you might as well read about something. How about ironing? Woo Hoo! 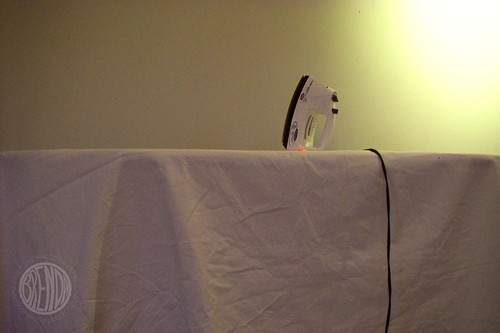 The suspense is killing you, I can tell.

There actually is a bit of a story to my couch-covering operation. The whole mission almost got aborted! I was actually walking around the house fretting and yelling “Abort! Abort! Mission abort!” silently in my head on Friday.

I was stressing out because instead of spending the whole day figuring out how to cover a couch for the first time ever (and I should mention here that though I am crafty, I am not a seamstress), I had to go deal with my mother-in-law instead.

As you know, the last time I had to deal with my mother-in-law was very very bad. It’s not that I want an apology from her but I don’t really want to talk to her either. The thought of a car ride with her is pretty much my worst idea of a good time. She’ll try to explain herself, she’ll try to apologize, she’ll try to make promises that mean nothing…it’s just bad bad bad. There is no good way to deal with my mother-in-law other than pretend what happened last time didn’t happen. And that’s not all that great either.

I’ve had a lot going on this last week and every day was ear-marked with something I had to get done. Friday was my only day to get the couch covered before Toby got home. You’d think that it would be no big deal to have Toby come home to a half-covered couch but you would be wrong.

You see, I decided to use some other cushions from a different couch to replace our present cushions that are rapidly evaporating into orange foam dust. The only problem with this little switcheroo is that the replacement cushions came from a PURPLE COUCH and if I didn’t get them covered in time then there would be purple cushions on my white couch. Purple! Ack! Toby would not understand.

The fact that my mother-in-law highjacked my purple-couch-cushion—covering day with her many needs really angered me. Her errands are never simple and they always end up taking the entire day. This time, not only did her errands completely disregard Baby Bug’s lunchtime and nap time, they also put me smack dab in the middle of rush hour traffic at the end of the day. Oh, and they also used up a whole tank of gas, which is not cheap these days. Joy joy. Happy. Happy.

It could have been worse. She could have been drinking. But I was still mad because I had plans! How dare she take up my whole day with car trips to Fullerton and back? And then I had to go and get lost. Ugh it was terrible.

My mother-in-law is starting to lose her memory, like we all will in time. I hate to get mad about that because I know I’m probably going to be just like her if not worse. But part of her memory problem is also due to pickling her brain with alcohol, so maybe I can be mad about that part. Either way, it was super annoying to sit in the car with her for an hour and answer the same question over and over every ten minutes.

“When will Toby be back?”

“Oh, I didn’t realize he was going to be gone so long.”

And then I got lost. Like an idiot I missed my exit/detour for the 5 and drove 30 minutes in the wrong direction on the 91. I was missing Toby so bad. If there’s one thing Toby can do, it is this: He can help me out with directions. He was born with a compass in his head. He reads maps for fun. I’m not even kidding. He also used to be a pizza delivery guy.

I called my mother-in-law’s social worker and he was about as helpful as a blind bat. He kept telling me to get off the freeway and go surface streets. I’m sorry, I’m a housewife from Orange County. I don’t get off the freeway in Inglewood if I can help it. I did end up pulling off somewhere and getting directions from a non-English speaking guy who owned a liquor store and thankfully got back on a freeway I recognized.

I was frazzled. Baby Bug was starting to get hungry and tired and my mother-in-law was trying to steal my map from me so she could give me directions. It was not pretty. I almost snapped. I really almost started crying while I was driving which is not good at all when you are lost. Crying never helps.

I know you are wondering why I ever even volunteered for such a crazy day. I don’t owe my mother-in-law anything. I want her to get this new apartment (the errands were to take her from her adult care center to her new apartment for orientation… etc etc…) because the rent is much much cheaper than her present apartment and from time to time Toby and I have to step in and help her out with rent. So financially it is in my best interest to help her but it’s so not cool for me to get involved with her life.

I met the new landlord at her new apartment and I just had a horrible feeling about it. I don’t want to meet this guy. I don’t want him to know who I am. I don’t want to be the face behind the name that he looks up in the phone book to call when she starts drinking again in six months and vomits wine all over his white berber rug. There is a reason she doesn’t have close family and this is why.

But what is done is done.

It was a long day. By the time I got home, I was fried. There was no way I could get my couch cushions covered so I didn’t. I just went to bed and stared at the ceiling in the dark.

I did wake up super early the next day and managed to get one cushion covered before I had to rush off to a baby shower. I was an hour late to the baby shower but my friend didn’t mind. Everyone is always late to baby showers. I figured it was better to be late than not come at all. So we came late and nobody even blinked an eye about it.

After the baby shower, I turned on Noggin and let Baby Bug watch tv until bedtime. I worked late into the night and I’m happy to say I did manage to get all three cushions covered. It was a little sketchy there for a while.

The first cushion I made was too big and it looks sloppy and slack. The other two are just right but nearly impossible to fit over the rough spongy foam. You should have seen me wrestling those big foam rectangles. I looked like a cowboy trying to break in a new horse. I didn’t have time to vacuum up all my many many threads off the floor before we had to go pick up Toby from the airport early the next morning but I did finish my cushions and that felt good. 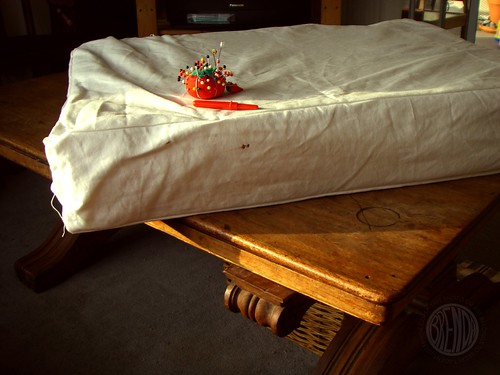 Operation Couch Cover may not be a complete success but at least there were no purple cushions when Toby got home. Maybe tomorrow I’ll take a picture of the whole couch. Or maybe I’ll post something about piranhas! 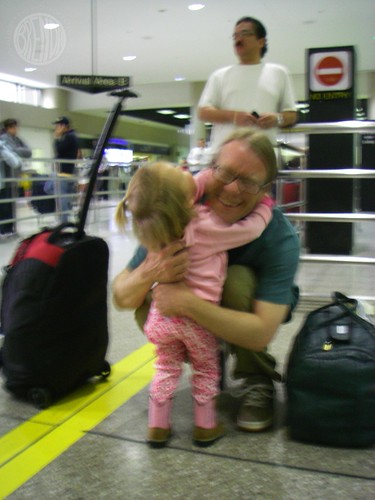 I think I’m going to go sleep for a week now.