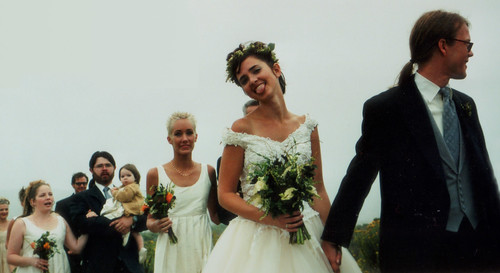 I think my wedding was the prettiest wedding ever… even if a million things went wrong. You know what they say, “One thing will always go wrong and nobody will ever notice”. Well, it’s true. And sometimes fifty things will go wrong and still people won’t notice. This is the story behind my wedding and all the little things that went wrong that made it… just right.

Toby and I got married at 9:30 in the morning on a Saturday. September 25th, 1999 to be exact. I wanted to get married on 9.9.99 but the ninth was a Thursday and Thursdays didn’t really work out for anybody’s schedule. 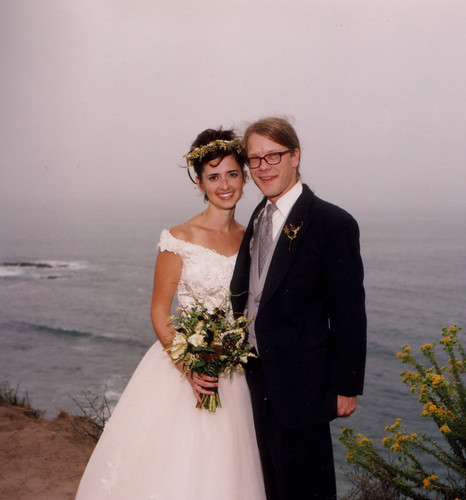 I don’t know what I was thinking making Toby, the world’s most renowned sleeper-in-er, to be at his own wedding any time before noon. Obviously, I wasn’t thinking. I was more concerned about having a beach wedding and not wanting the afternoon wind to pick us up and blow us off the cliff. So morning it was and amazingly Toby made it to the wedding in plenty of time.

I’m sure all my coworkers were grumbling that they had to get their butts out of bed early on a weekend and then when they got there, there wasn’t even going to be any alcohol served. What a buzz kill. But the park we had the wedding at was a state park (only $25! for a permit) and alcohol was not allowed. Not to mention we have a few alcoholics in the family who… well, that’s another blog for another time. Lets just say we were better off without the alcohol for many reasons. 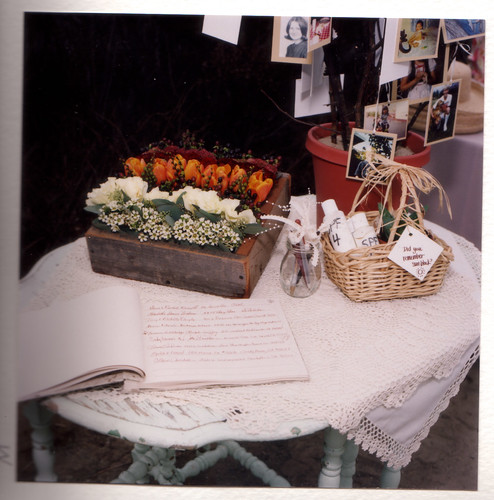 In spite of the was early hour and lack of alcohol, it was a beautiful day for a wedding. IT WAS FOGGY! Not exactly what I dreamed up but it was kind of cool in a misty, mystical I-dream-of-Enya sort of way. I was so paranoid of people getting sunburned that I set out a basket of sunscreen and a stack of straw hats next to the guest book for people to wear. This turned out to be silly and totally overkill but a few people went home with a cute straw hat. 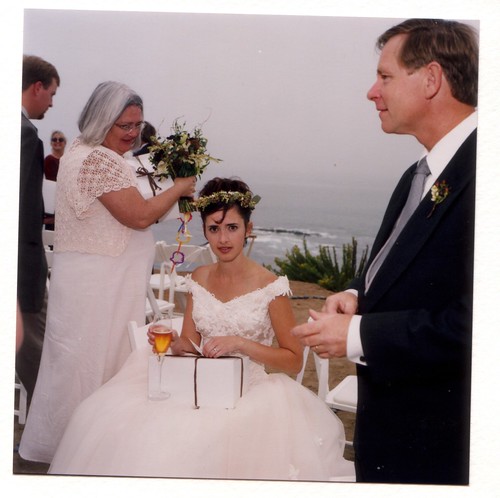 Let’s talk about my hair. My hair was the number one thing that went wrong. Here is my advice to all brides to be: Don’t pay someone to do your hair at 5 am. Just do your own hair. If you must pay someone to do your hair for you, please please please have them do it at least once before your big day. You don’t want to end up with Marge hair like me.

I did go to this hair dresser a couple of times before my wedding. We talked about what I wanted and I think she even played with my hair a little. I had just cut my hair super short earlier that year and we both knew that getting it to look “romantic” was going to be a bit of a challenge. But she seemed confident and “cool” and “hip” so I put my wedding hair in her hands.

Big mistake. First of all getting my hair, my mom’s hair, all my many many many bridesmaids hair done BEFORE a 9:30 am wedding was a huge big job. A job that this hairdresser didn’t really think very much about before she said yes. And I, like the naive idiot that I am thought it would be fine. I love mornings! Doesn’t everyone else too? 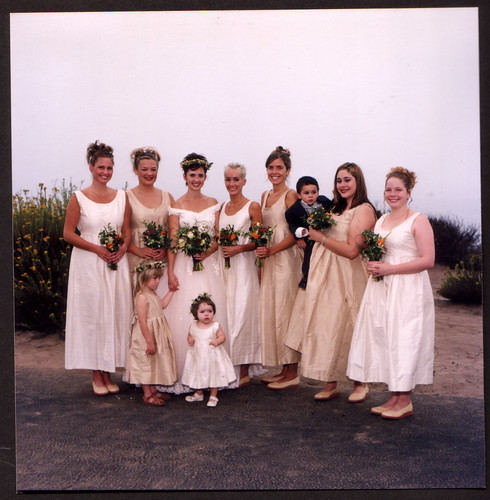 No they do not. The hairdresser was so overwhelmed by all the hair she had to style before eight something in the morning, she had bribe an assistant to help her out. The assistant turned out to be way more skilled than she was and did all of our hair in some kind of slicked back crazy spikey 1999 New York fashion run-way style. She was very good… it’s just that I didn’t want crazy spikey 1999 New York hair for my romantic outdoor soft and natural wedding. Everything was wrong.

As if my mile high spiked hair wasn’t bad enough, I fell under the spell of the high fashion New York assistant and I let her plaster on some white under-the-eye shadow and dark red lipstick that made me look like a scary goth girl. I never wear make up. It was all wrong. Thankfully, I came to my senses somewhere between my house and the beach and managed to scrape off three layers of the white stuff before we started taking pictures. 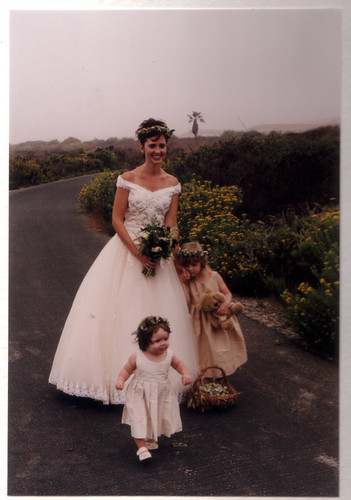 My hair was another story. My friend Kate somehow magically showed up at the hair salon with a little baby fairy wreath of flowers that she made for me without me even asking. She put it over my giant bobby-pinned hair-do and somehow the division of flowers over giant hair made it seem less Margish and more Audrey Hepburn. Kate literally saved the day. Now, when I look back at those pictures I kind of like my hair. I don’t love the one piece of bang that lops over onto my forehead but at least my short hair forced into an up-do is not terribly unflattering.

The next thing that went wrong was the actual ceremony. Hardly anybody knows this story and it is kind of funny actually. Because I was excommunicated from the meeting at the time, I had to find a pastor to marry us that I did not know. We finally ended up using a pastor that we liked from a friend’s wedding. He was very charismatic and told funny jokes. But he also seemed pretty grounded and used verses from the bible that we were familiar with.

We met with him two times before the wedding. He counseled us on how to manage money as a couple and how to work together to solve problems. He was kind and wise and we thought he was going to be the best person to marry us.

We didn’t realize that he had scheduled to speak at a funeral the same day as our wedding and last minute couldn’t make it! Yes. On the day of our wedding we did not have a pastor. Talk about bridezilla freak out attacks. I don’t know what I did. I think I have blocked it out.

I guess pastors have this sort of over-booking problem now and then and they have a network of friends who will stand in for them. So there we were on our wedding day, standing there getting married by someone we had never ever seen before in our lives! But the funny part was that he was also very charismatic and told jokes and stories about us as if he had known us our entire lives. It was actually very creepy. 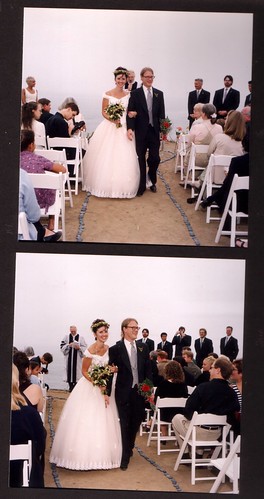 At one point, the stand-in pastor said Toby had told him something wonderful about me that Toby never even said. People in the audience started tearing up it was all so romantic. What a perfect couple on a perfect day they must have thought. Meanwhile, Toby and I are staring at each other with wide eyes thinking what the…??! I wish I remembered the exact phrasing. I think I have it in a box somewhere. It was a script the pastor read by heart and later gave to us on paper. Maybe someday I’ll find it and post it here. 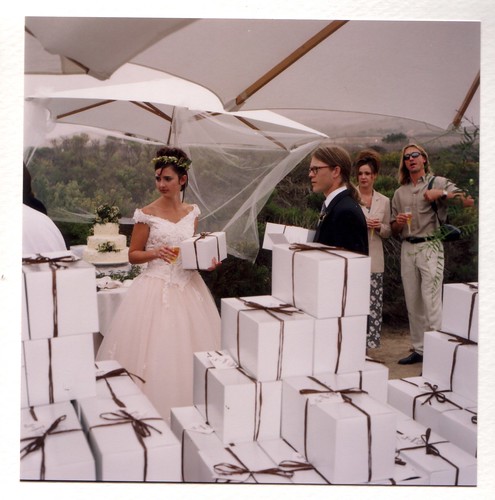 Those were the two big things that went wrong. The other things that went wrong were not so very terrible. There was the case of ants making a giant trail up the food tables that were amazingly exterminated by my friend the fairy godmother with a big can of Raid before I even showed up. Then there was my mom’s hair and how the hair dresser put some kind of awful mousse in it that made it look dirty and stringy in every single photo.

Let’s not forget how we didn’t do anything that we practiced during the wedding rehearsal the day before. The bridesmaids filed down to the front of the ceremony BEFORE the groomsmen and when the groomsmen finally figured out where they were supposed to be, they all rushed in at the same time looking like guilty hooligans. Of course this bothered me tremendously but not a single person I asked about it afterwards knows what I am talking about. 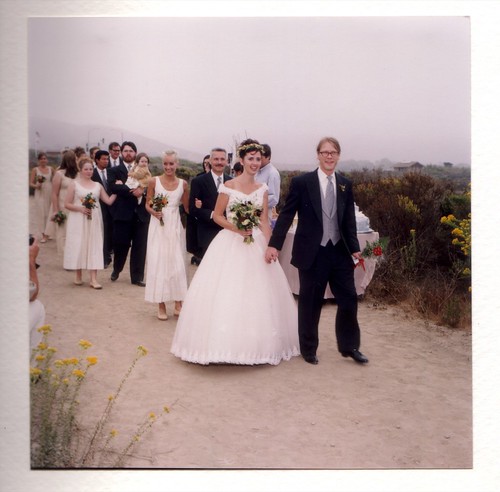 Then there was the whole credit card fiasco. This is such a typical Brenda story. I lost my wallet the day before my wedding. I was such a scatterbrain. I left it on top of my car at the tailor’s when I was picking up my altered wedding dress and then I drove off leaving it there in the parking lot. When I figured out what I had done, I freaked out and called and cancelled ALL of my credit cards.

This was really stupid since not more than a few hours later some kind stranger found my wallet and called me to return it. What a wonderful turn of events except that I cancelled ALL of my credit cards and by the time I got my wallet back it was too late to get them all turned back on again. Which made it impossible to pay all my vendors (caterer, pastor, Flamenco guitarist, state park, the parking gate…etc etc) on the day of.

It was a nightmare. The caterer took a check thankfully and the rest I ended up paying with cash advances (and going into major overdraft) out of various atm machines. 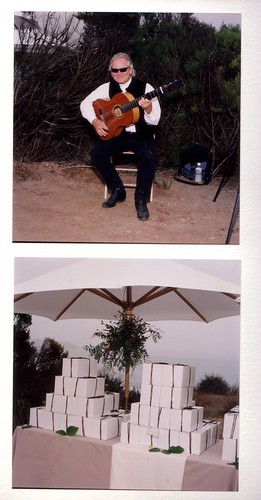 Lastly, but not least, was my bridezilla moment. I am so not proud of this. I hired a Flamenco guitarist to play during the ceremony and reception lunch. He was wonderful, so very talented with his long long long fingernails strumming away on his beautiful guitar. He also happened to be the same musician that played at the Gypsy Den on my first date with Toby (we went there after our dinner at the Hari Krishna Temple). Everything was perfect. Except his amplifier.

Since our wedding was at the beach there was quite a bit of background noise (ie; surf and wind) the musician had to overcome. In order to play over this background noise he needed an amplifier. But since our wedding was out in the sticks not anywhere near any kind of electrical outlet this amplifier had to be powered by a generator. A very noisy generator that had to be hidden five hills away in order to mask it’s noise.

I’m not really up on my electronics but somehow this amplifier worked with the generator via air waves. Maybe this was like wifi before wifi was invented. I have no clue. All I know is that the connection was not very clear and the pretty Flamenco music kept cutting out like a bad cell phone call.

All I knew was that my music was not working. I had planned too hard and too long for some stupid generator to ruin my perfect day. Before I knew it, I spouted off something really loud in front of everybody about how they better fix it. I completely forgot that I was the center of attention wearing a pretty fairy princess dress and looking so demure. Yelling about generators was not exactly becoming of the fair bride. Good thing nobody was filming that part. 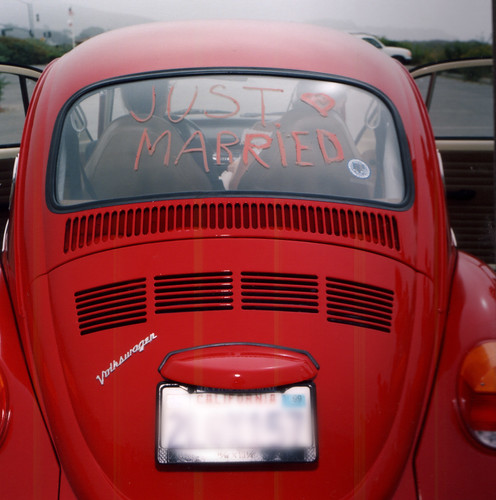 I’m pretty sure there were many many more things that went wrong but this post is already too long as it is. I just want to sum it all up by saying the wedding was perfect. Even though everything went wrong, it all turned out okay and I still remember it as one of the best days of my life.