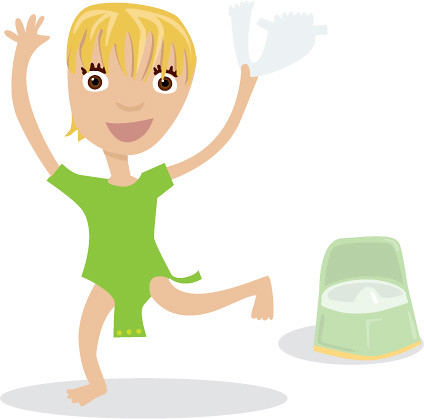 I know it’s probably way too early to be getting excited about this but… Baby Bug has shown a significant interest in potty training!!! I know! She’s only twenty months! Not that this means anything, all the books I’ve read warn that early interest does not necessarily mean early mastery or that Baby Bug is going to read before she is three or anything. It could happen though.

I’m not in a rush about this at all. It just sort of happened. Maybe it was the youtube movies we watched, maybe it was because she idolizes her older cousin SuperChic, who is four and going through the whole ordeal. Who knows. But it’s sort of a big deal at our house. Like jumping up and down, singing happy songs and celebrating big deal. She is so proud of herself.

It started because she pooped in the tub. I hate poop in the tub. It’s disgusting. I have to fish the poop out of the water with my hands through a plastic grocery shopping bag, kind of like how dog owners scoop up dog poop at the park. Then I have to wash out the tub and it’s just this whole ordeal that I don’t really love very much. Not to mention, bath time is very close to bed time and thus not the best time to be busy cleaning things.

I think Baby Bug picked up on my distaste for poop scooping (even though I tried really hard to let her know that she’s not in trouble in any way) because soon she started getting this really distressed look on her face in the tub.

“Poopy!” She says, all worried, with eyes bugging out of her head. “Poopy! Poopy!”

I think she wants me to put her diaper back on her so she can poop normally but that’s not an option. She’s wet and slippery and who knows where I put that old diaper anyway. So I lift her out of the tub, dripping, and attempt to put her on the big person toilet.

That’s a mistake. Her little wet butt nearly slips off and now she’s terrified of the giant potty hole. Maybe there are snakes in there or something. So there I stand, distraught mother with no idea what to do. I put her back in the tub and …viola! poop in the tub.

After this happened a couple of times, I put my thinking cap on and decided that maybe if I had a baby potty in the bathroom, near the bathtub, I could just put her on that and all my problems would be solved. It would be just her size. And why not? She might as well get used to the idea anyway.

So off to the baby store we went. I didn’t plan this but buying a baby potty became quite the event. Baby Bug and I went together and talked about it the whole way to the store. At the store we looked at the potties and she picked out the GREEN one, of course. I didn’t even know they made green potties. This was a very lucky break.

Baby Bug loves green. Really really really loves it. I think she eats grapes and lettuce, celery and broccoli just because they are green, not necessarily because she likes the taste of them. I gather this, since I often find them chewed and spit out later. Sigh….motherhood is so glamourous.

At the baby store, we found a book about going potty. (There was a movie too but I didn’t think we really needed that.) It was all very exciting. New book! New potty! It was like Christmas. I bet we could throw a party and have potty cupcakes and everyone would be totally into it. Well, maybe not the potty cupcake part.

Anyway, everything is all about the potty all the time at our house now. Baby Bug loves her potty. She wants to sit on it all the time. When I go to the bathroom, she goes with me and sings, “Mommy potty. Baby Potty!” over and over and over again.

I find her all over the house with her diaper off, talking about going to the potty. It’s actually becoming a bit of a pain in the neck and I find myself dressing her in onesies with snaps just so she can’t take her clothes off and run around.

Getting her to the potty is not that easy. We keep the back of the house (where the bathroom is) blocked off because that is where Toby’s office is and he needs it quiet to work. It’s bad enough that I go to the bathroom a million times already. Every time I open the door, every time I flush… it’s all within hearing distance of Toby’s office and he can be a bit grumpy when interrupted over and over again.

So you can imagine my distress when going potty is Baby Bug’s new favorite thing. Maybe I’ll have to move her little toilet to the kitchen or something. I don’t know.

Anyway, I thought I better blog about this because it is all very exciting and newsworthy in the world of Baby Bug. Since I don’t keep a baby book, I better record it here that Baby Bug has officially used her potty four times in the last three days.

I’m proud of her.