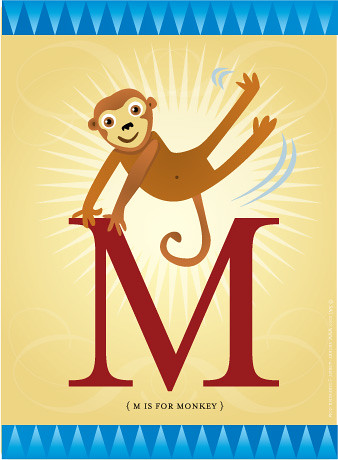 The letter “M” could be for nothing other than monkey. Monkey Monkey Monkey. Or as Baby Bug calls them, “Oooh Oooh Aaagh Aaaagh’s”. She loves monkeys. I’m already planning her second birthday party in my head (because I’m a freak like that and that’s what I daydream about when I’m bored, like when I’m watching teletubbies). I’m thinking I might plan a Green Monkey party or a Green Hawaiian party. Green because that is Baby Bug’s favorite favorite color and Hawaiian because we will have just gotten back from our trip to Hawaii in December and who knows, maybe I’ll be inspired.

That’s my next big thing. The Dog Days of Summer are officially over and now I can think about Hawaii! I’ve never been to Hawaii. I have a grandfather who lives in Honolulu but he divorced my Grandma and left her with six kids so I’ve never really thought of him as family. He’s a Deadbeat Grandpa I guess. I think I’ve met him twice in my whole life.

Anyway, we’re going to Hawaii because Toby is shooting a couple of houses over there and we are tagging along. It won’t be a crazy touristy trip. I imagine we’ll be stuck stranded in a hotel quite a bit but I can’t complain. If you’re gonna be stuck some where, it might as well be Hawaii.

But back to the letters…. Hawaii is a ways off. I still have three months to get excited about it.

“N” is for Newt! This was a bit of a thinker for me. I didn’t want to do Narwhale because what the blankety blank is a Narwhale? Do they even exist? Isn’t that like a unicorn whale from Narnia or something? I thought about doing Nightingale, which is a very cute bird, but Toby is kind of a snob about birds. He has some sort of prejudice against birds from the East Coast. I didn’t want to listen to him going on an on about it so I just skipped it. He’s weird.

Then I googled “animals that start with the letter N” and Newt came up. I love Newts! I almost bought one once way back when I used to live in a lonely apartment in Irvine and I had no pets. They are so cute and little. I was at a pet store holding one, thinking about buying it when suddenly the silly thing just ran off the edge of my hand and landed splat on the floor. He was fine but after that I decided I didn’t really want a Newt as a pet.

Who knows, maybe someday Baby Bug will have an aquarium with a Newt. Newts are cool.

Download your letters here! Oh no! You missed the free letter download. Stay tuned. They will be released again for sale in my shop.