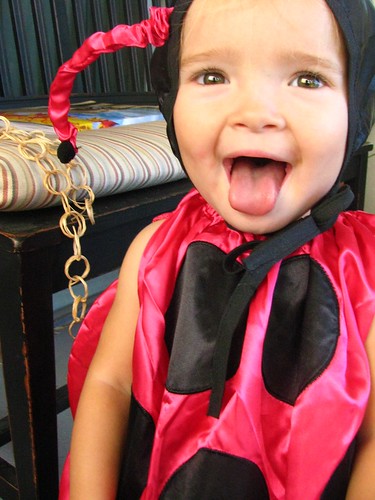 I was walking along today, minding my own business, when all of a sudden out of the corner of my eye I spotted a hot pink lady bug costume in a fancy schmancy boutique store near where I live. I never shop in this store. I can’t even afford to buy socks in this store. But the ladybug costume shouted at me. It was bright pink and satin and had big spots!

I stopped. I stared. I asked the nice sales ladies if I could park my giant jogger stroller in their doorway while I examined the ladybug costume up close. You know, just for ideas. Not buying anything. 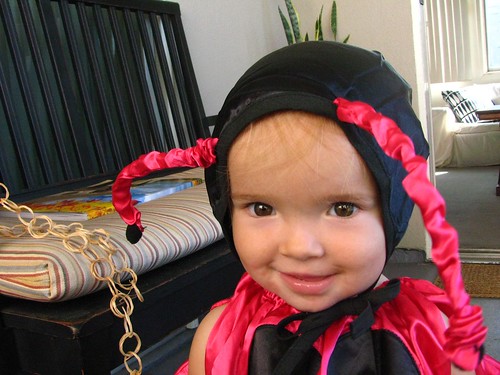 “Of course!” they said cheerily. “Come on in!” And while they cooed over how cute Baby Bug is, I examined the costume thoroughly.

I’m really into costumes. I like dressing up. I could care less about Halloween (I hate scary stuff) but dressing up is plenty enough reason to celebrate. I can overlook the vampires and bloody mummies if there is any dressing up going on. Bring on the costumes! Let your imagination run free!

I’ve been wondering what to dress Baby Bug up as for Halloween. There was this one little niggling thought about how cute she would be as a bug. But… sigh… I already have several hand-me-down costumes from my many nieces shoved in her pajama drawer, just waiting to be tried on. 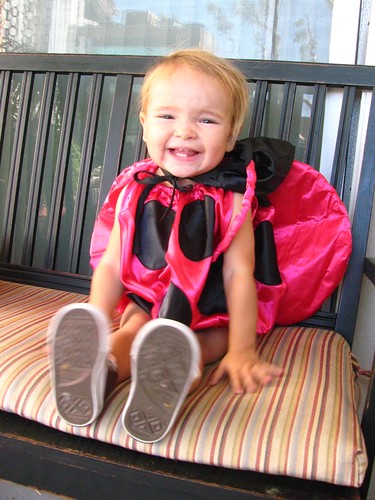 I really shouldn’t be spending money on these things. Not to mention, I could MAKE her a costume. I’m almost famous for doing that sort of thing, even though I can’t sew worth beans. And when would I do that? At thirteen o’clock on the second Tuesday of Never?

I even toyed with the idea of making her a teapot costume. Because she likes to sing, “I’m a Little Teapot” all the time. How cute would that be made out of some floral calico with a teapot lid for a hat? I can even visualize the shape… round in the middle, piping on the edges. Adorable. She could wear stripey off white tights. It would be perfect!

Except I can’t sew worth beans and I’d have to bribe somebody to do it for me. And then there’s the fact that Toby was traumatized by that song and doesn’t want his little girl dressing up as such a humiliating thing. I guess in Boy Scouts they do some kind of cruel and unusual hazing ritual that involves boys standing up in front of all the other scouts and making them sing “I’m a Little Teapot”. I don’t know. I was never in boy scouts.

But whatever. I don’t have time to be sewing and I think I’ve used up all my free sewing cards. The teapot idea was out. I was resigned to just dressing Baby Bug up as a “lady bug” wearing a black onsie, black tights, a red tutu and SuperChic’s old hand-me-down ladybug wings. They don’t really look like ladybug wings. They are just red spotted butterfly wings but they would work. She could be a little fairy-princess-bug or something. Isn’t that all the rage anyway?

So you can imagine my surprise when I examined the hot pink lady bug costume in the fancy schmancy boutique store and saw that the price tag said only $24!!! Twenty-four dollars! I’d pay more to buy the fabric and make it myself! My wallet danced itself out right of my purse and I bought the costume on the spot. How could I not? 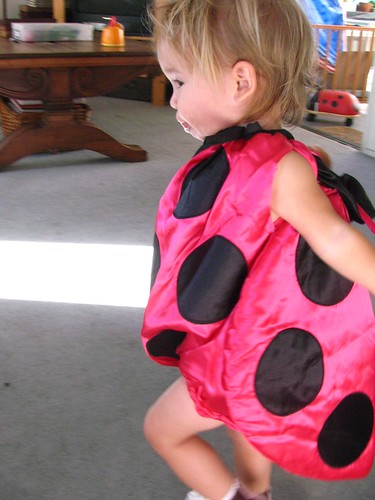 When we got home we had to try it on right away. Of course Baby Bug loved it. She raced around the living room blowing raspberries because that’s what she thinks ladybugs do. It’s my fault for letting her watch this movie since she was three months old or something. I’ve corrupted her. She thinks that all bugs run around and tease each other this way. We had a lot of fun buzzing around and playing.

I’m so excited for Halloween to get here. Rapunzel and Superchic are coming to visit us and we are going to trick-or-treat this neighborhood like nobody’s business. I love being a mom (and an Aunt). You get to be a kid over and over again.

*That’s what she calls ladybugs, “bee-bugs”.