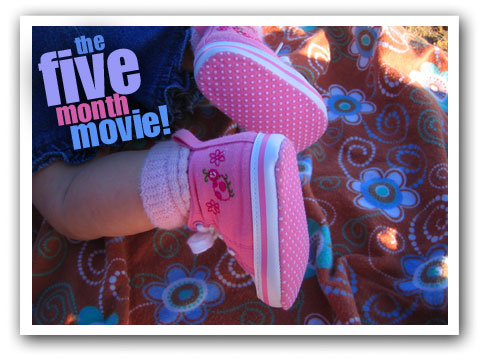 Baby Bug turned five months yesterday. She’s been learning a lot of new tricks lately but I wasn’t able to capture any of them on digital film. So we will have to be content to remember this time as the time she was a summer baby who liked to blow raspberries and eat her toes.

You’ll just have to imagine her squealing in delight over the cats as they brush by her exersaucer within inches of her wiggling fingers. She longs to sink them into their soft fuzzy tempting fur. You’ll have to imagine her little bird mouth opening and closing in desire as she watches me drink from a water bottle. When I give her a sip, half of the water comes right back out of her mouth and dribbles down her shirt but she wants more. She loves to drink water. She doesn’t want a sippy cup. She prefers to drink out of the bottle or out of a cup like mommy. Because she’s a “big girl” like that. She chases her lidless sippy cup around the tray of her exersaucer with sweeping gestures until it finally rides up over the lip and lands on the floor. Then she shrieks at it until I come and pick it up for her. It is a game that she is just beginning to see the fun in.

She’s also getting big. I watch her toes and then knees fly up over the edge of her bassinet. Soon she’ll figure out how to sit up and then I’ll have to grow up a little myself and give into the fact that I can’t keep her right next to me every minute of the day. I’ll have to learn to listen to the baby monitor and let her sleep in her crib like a proper baby. She needs room to stretch and roll about. But I’m just not ready. I’ve tried to put away the bassinet part of her stroller about forty-seven times and replace it with the toddler seat but it is in vain because I can’t stand her being alone in her room without me. So over and over I release all the velcro straps and assemble the bassinet all over again.

It’s hard to imagine that I’m going to be feeling this way for the next twenty years. I just don’t want her to grow up so quick. I think she’ll always grow a little faster than my heart can keep up.