posted in artsy fartsy, I have the best boyfriend, painting, party party on February 5, 2018 by SAJ 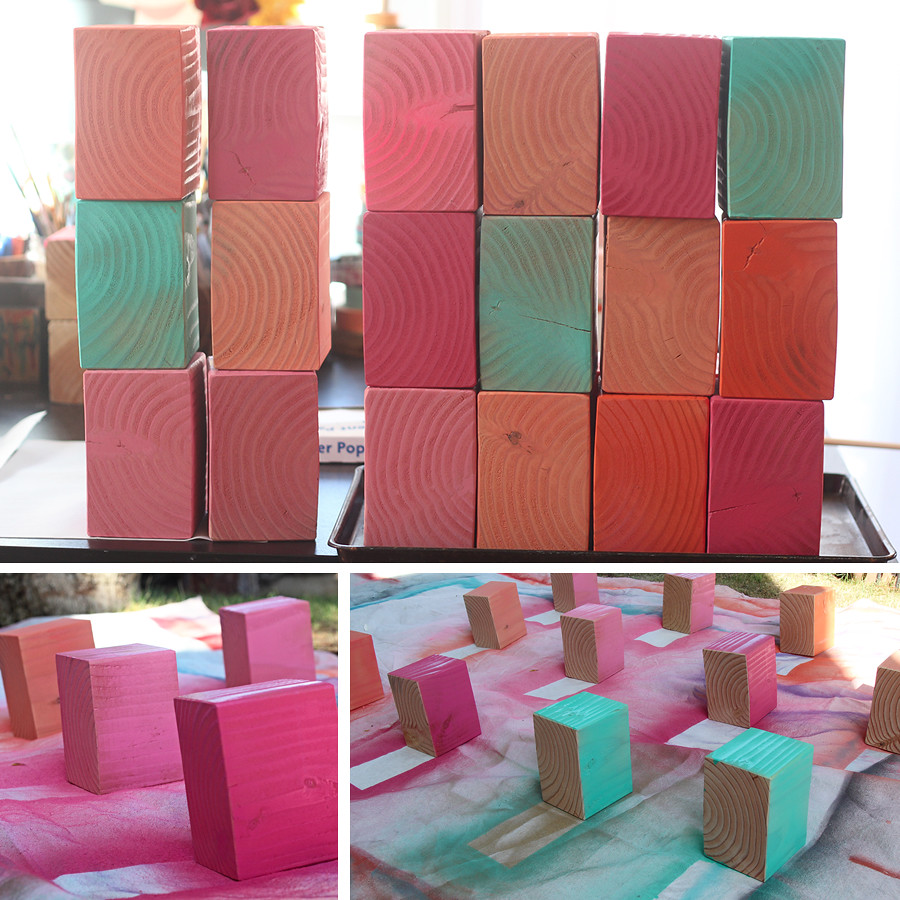 It’s been a fun few days making rainbows and blocks. I got this idea of modge-podging quotes on wooden blocks and putting them on the tables of this fun mother-daughter event. Really, it was a quote that I saw first that inspired this whole theme. Let me explain.

The quote was, “Life is tough my darling, but so are you.” It really resonated with me. I thought about all these girls getting their periods and being shocked (like I was way back when I was 14) that we have to put up with such an annoying inconvenience of menstruating every month. Really, grossness every single month?!! Who came up with this idea and why haven’t women called unfair? Over the years I learned to deal with the grossness and became an expert at it. I want these girls to not be shocked but amazed at what our bodies do. Maybe one of them will invent a new way of dealing with it. I have seen those ads on facebook… Anyway I really like the idea of taking something difficult and making it your strength and I thought that these quotes could inspire girls and their mothers to embrace their womanhood and be proud of it instead of feeling embarrassed or overwhelmed. That’s my thing really: Spin all the bad into good. Because how else are we going to get through difficult things? 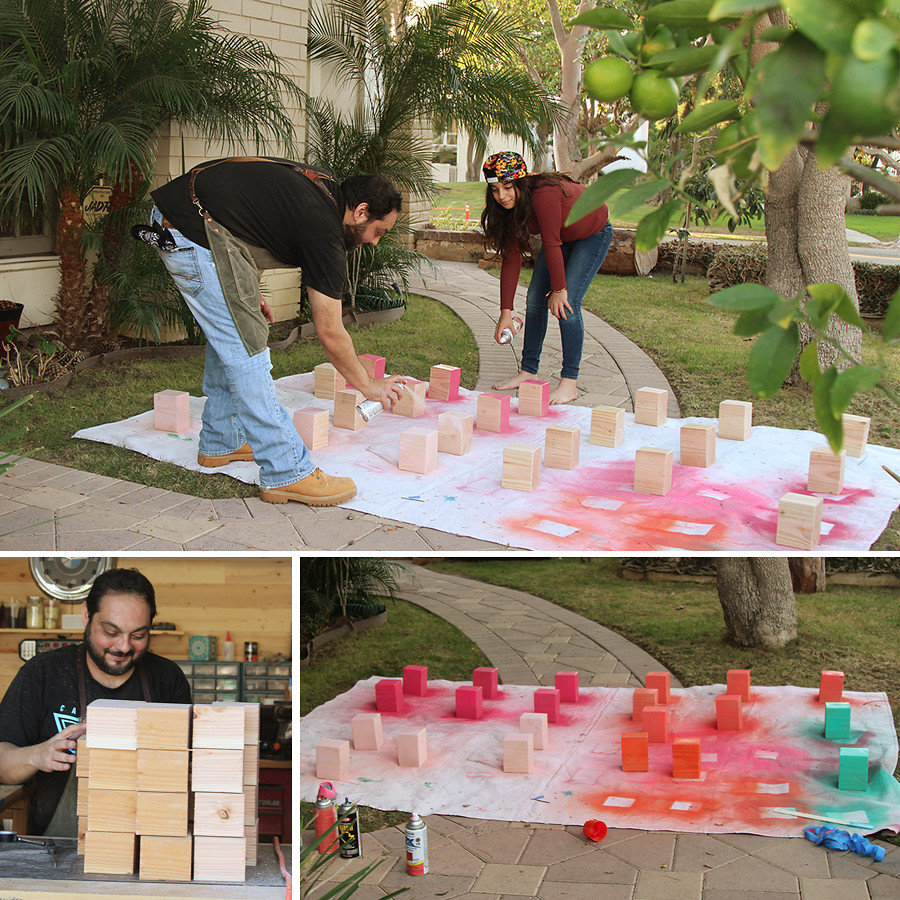 So blocks. Why? Because they are cool and heavy and cheap and fun to paint and decoupage paper onto. I picked a color palette similar to the big pink wall colors and away we went! Payam cutting and sanding them of course because he is the Super Boyfriend woodworker guy. 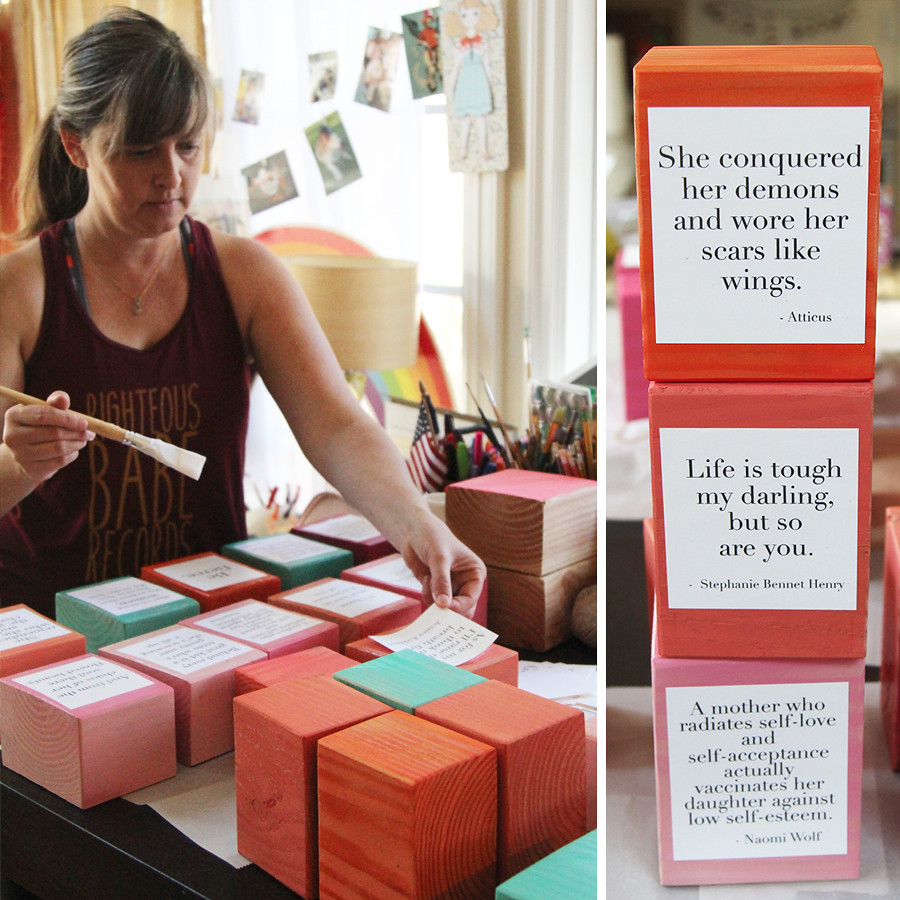 It was fun to scour the internet for good quotes. I had to think of how people would interpret them. I don’t want anyone to be offended by me pushing my silly self-healing doctrine down their throat but I think most of these are positive messages and hopefully can’t be misunderstood.

One thing I am worried about is the girls who don’t have mothers to bring with them. They’ll be bringing aunts or an older sister or maybe a close friend or neighbor and I’m hoping that that person loves them enough (I’m pretty sure they do since they are making the effort to attend) to use these quotes as teachable moments and it’s not too hard or too sad. I think everyone will band together to help and protect those girls, I know I will. My heart goes out to those girls. 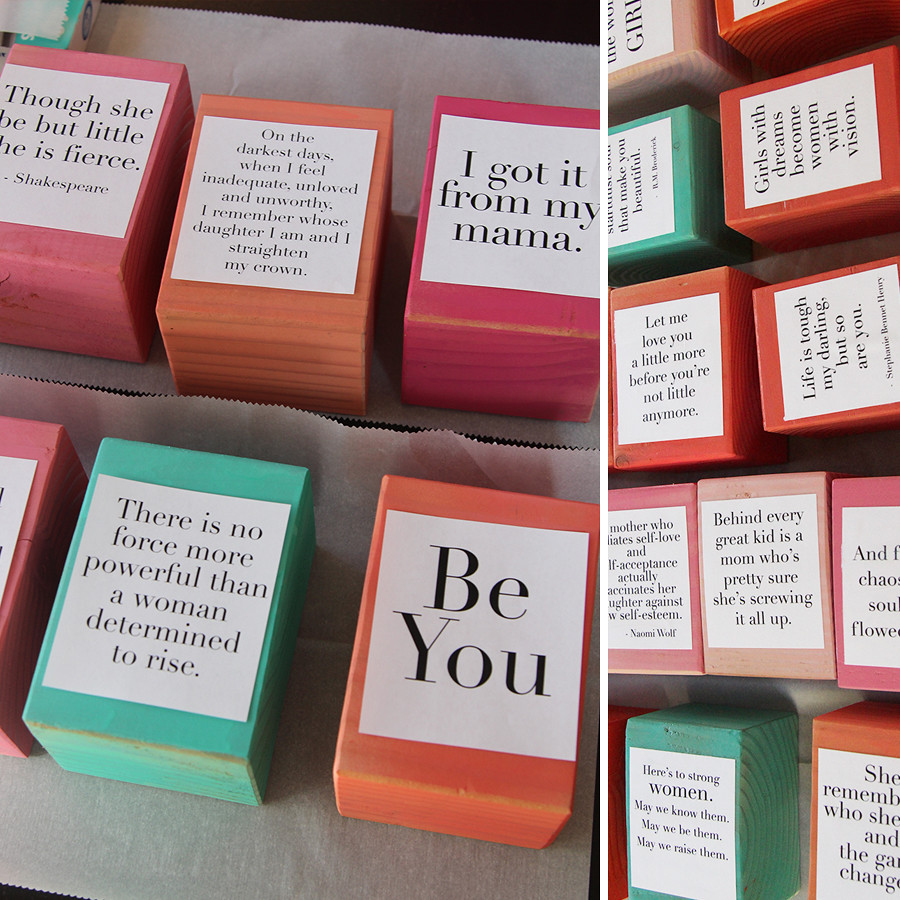 It has been brought up that mothers of boys who don’t have daughters and the fathers of daughters who don’t have mothers might be feeling left out and I am feeling pretty bad about that. I think I’m going to volunteer to throw a father-daughter dance or maybe just spread my graphic designer love in anyway the PTA needs me. I’m not sure how to help but my only real defense is that this is a subject that usually is neglected and I think it’s a cool thing that we are throwing some energy at it. I want to throw my energy at all the kids equally but sometimes you can only do what comes your way. 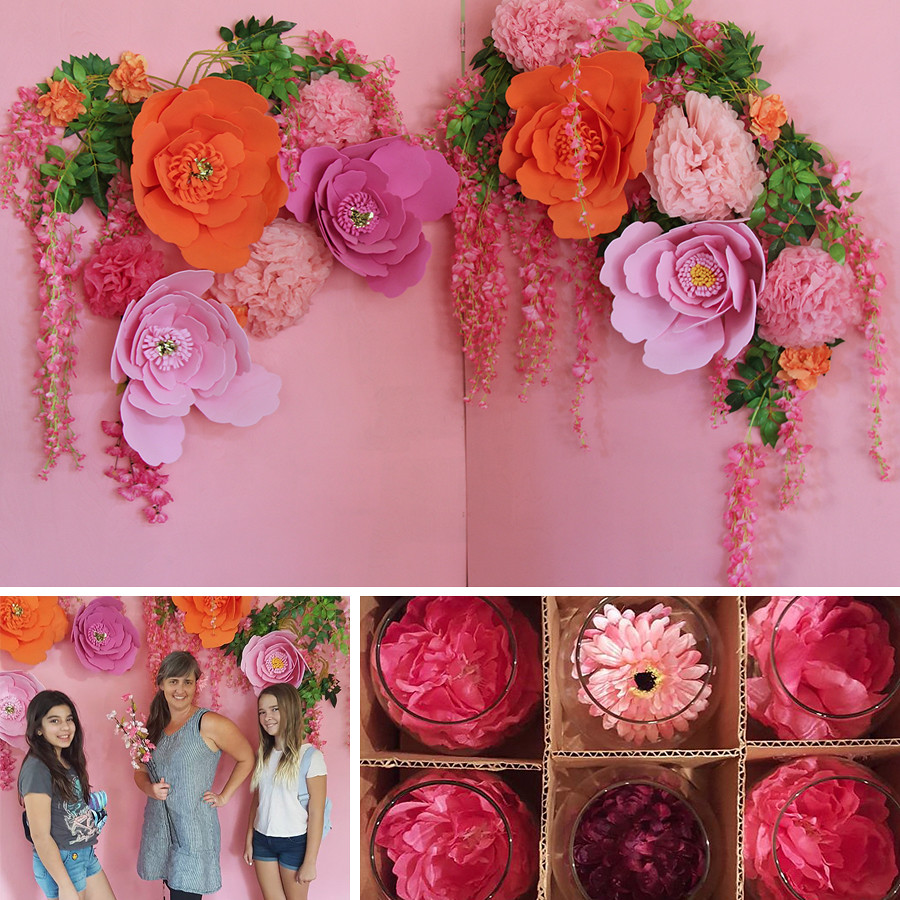 Next up was the rainbow vortex wall! As the week went on I came down with a cold and another wall was starting to seem more and more daunting. Should I just skip it and be happy that at least I had the giant pink wall? I seriously thought about it but my heart was set on that rainbow wall and thankfully my faithful companion, Payam, knows what makes me tick.

When Saturday finally rolled around the girls and I went to go get doughnuts (so Payam could sleep in a little bit as a reward) and then started into work. 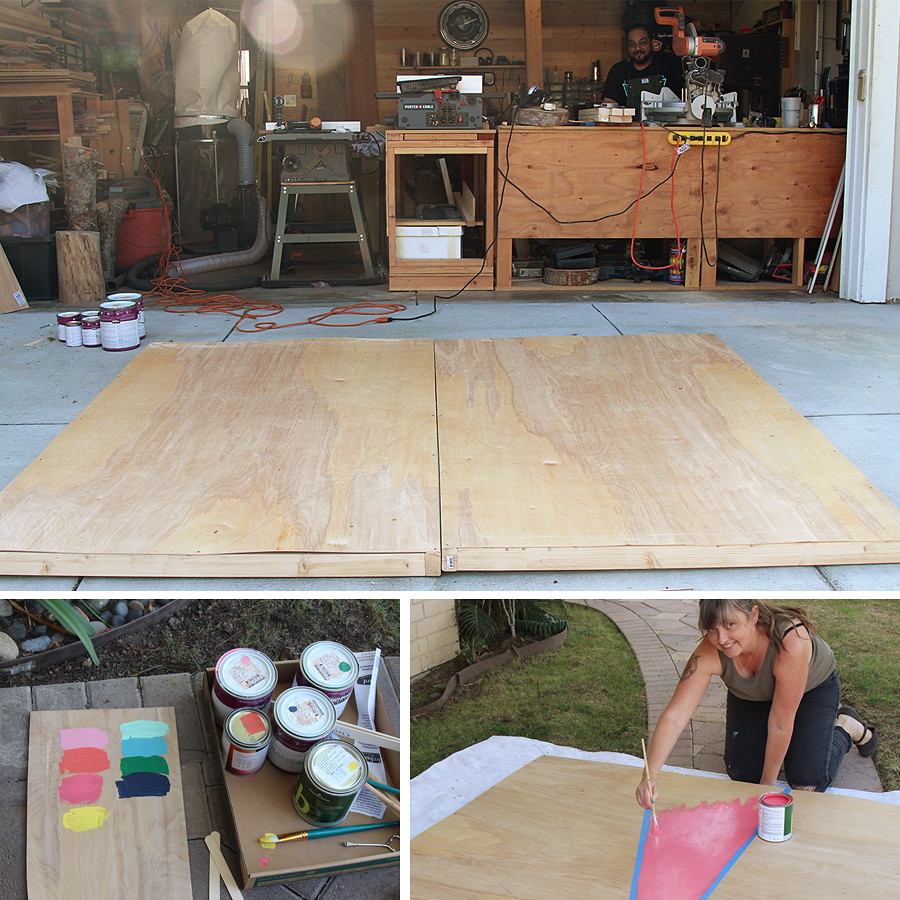 Working together it went pretty quickly and then I spent the rest of the day painting it. Payam helped me tape. 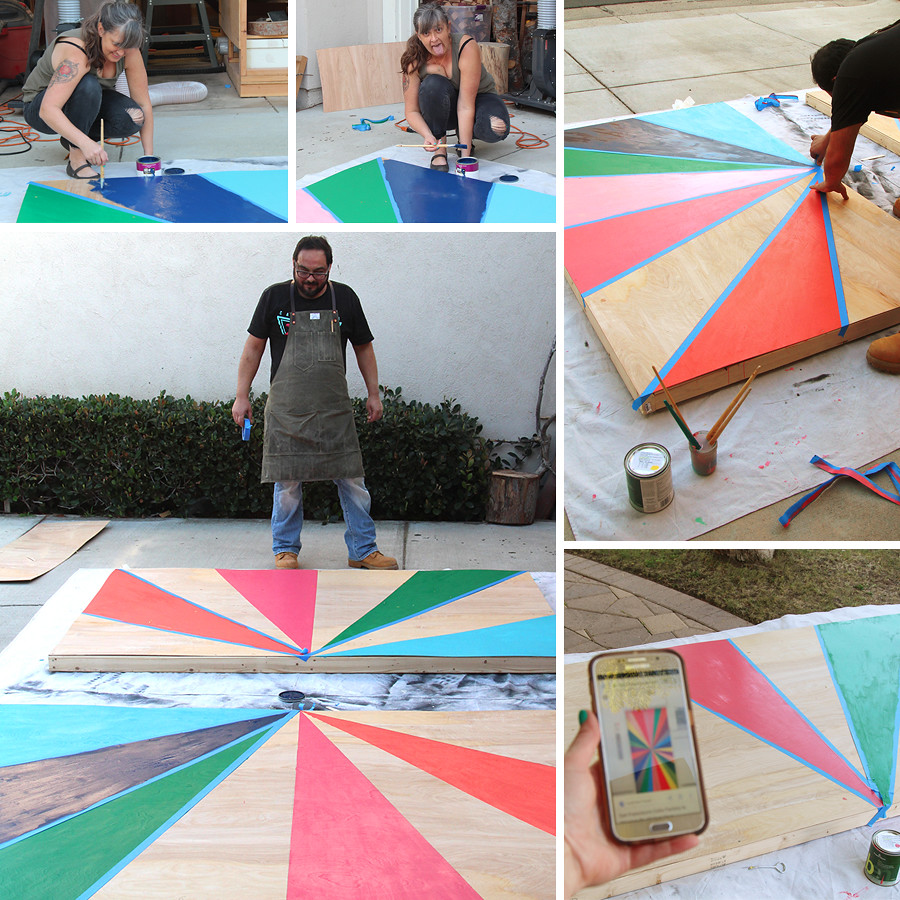 Painting takes forever! But it was worth all that work. As you can see I referred to the color factory’s elevator doors for inspiration. I love all these colors. They kind of remind me of Kate Spade colors.  Two of them are leftover paint from the girl’s rooms and another is an oops paint I picked up at the hardware store. I got lucky on that one. 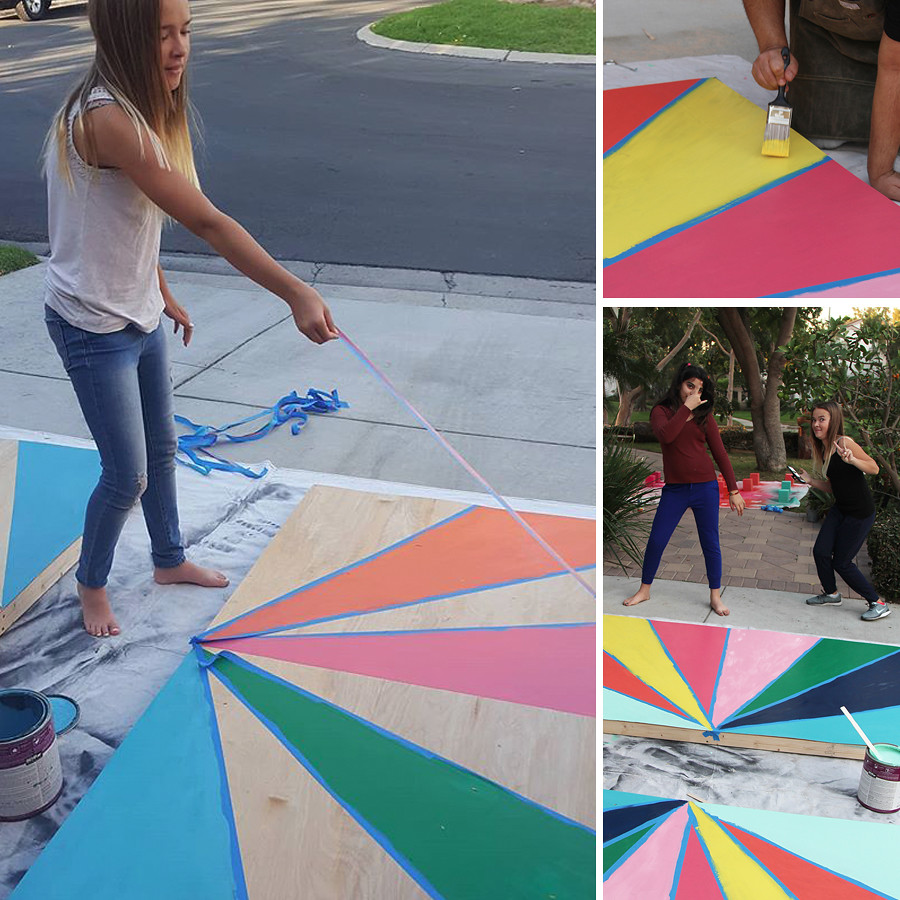 Pulling the tape is so satisfying. The girls were definitely around to help for that step. 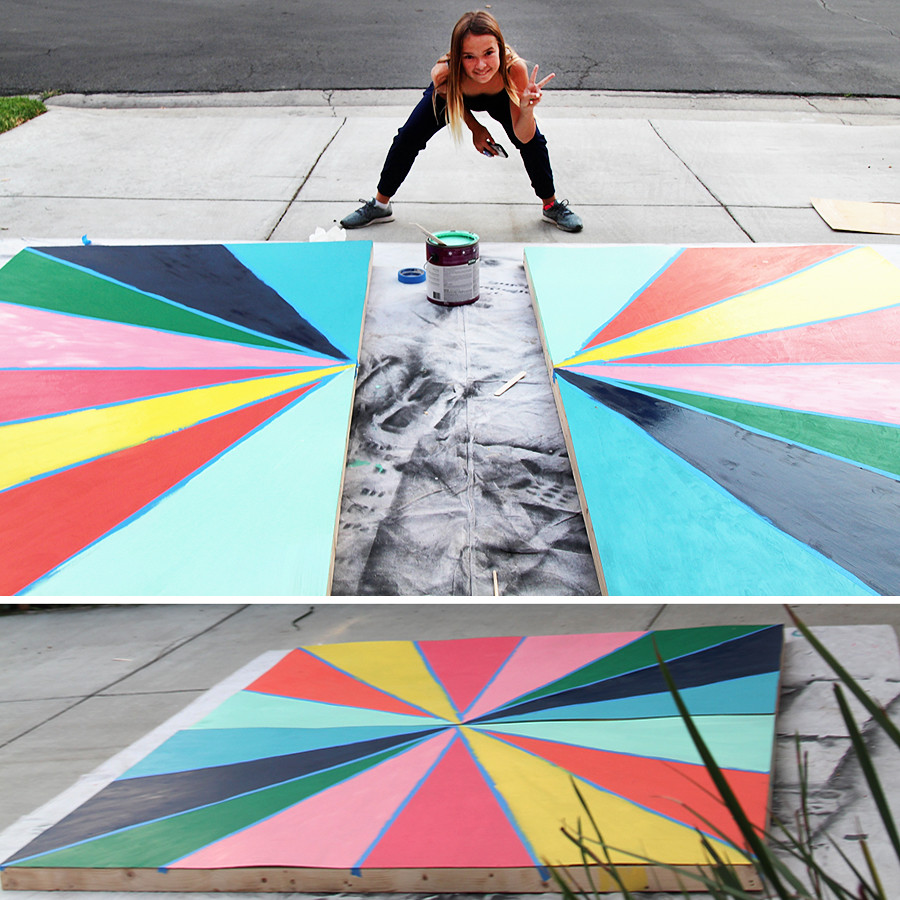 We finished the wall in the nick of time before sunset! Then I took Sunday off and today (Monday) I touched up some of the little blip mistakes. I don’t have a final photo but don’t worry I’ll have plenty to share from the event itself that happens this Wednesday.