posted in crazy stuff, London on September 7, 2017 by SAJ 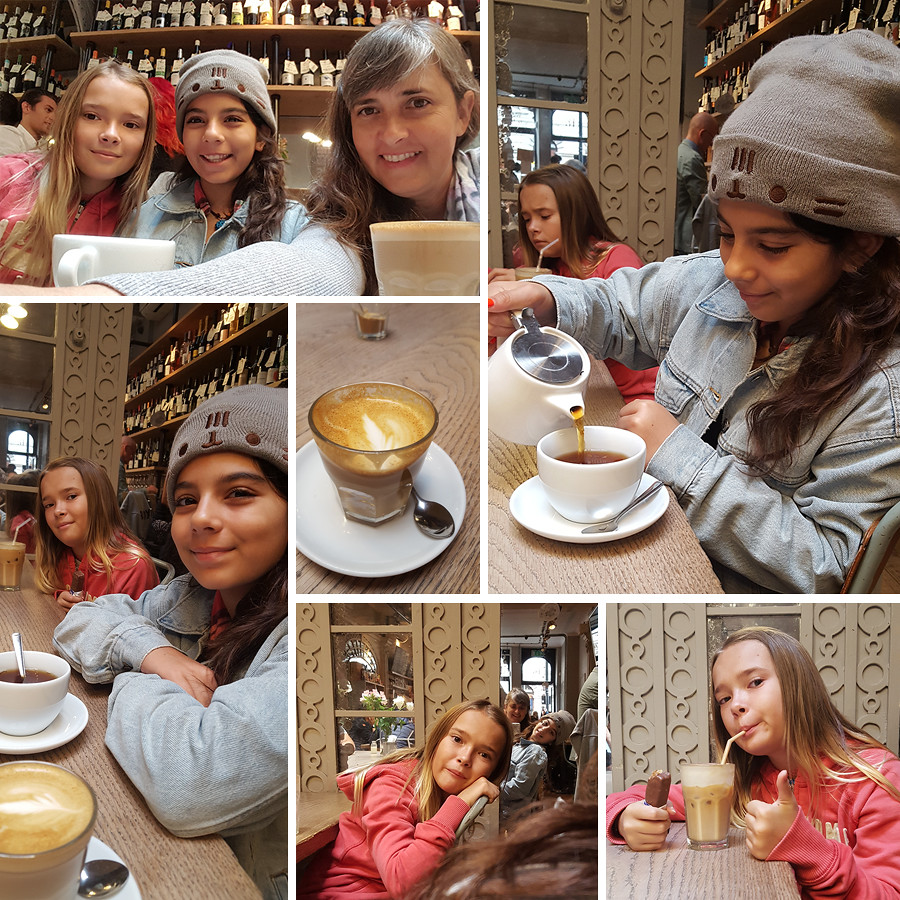 On the fourth day of visiting London I finally got my head screwed on straight.  I should have explained this earlier but I’ve always shied away from blogging about Payam’s diabetes and health problems because he’s pretty private about it himself. He’s the kind of guy who seems incredibly healthy outwardly. He’s so full of life. Like Joon, he throws himself enthusiastically into anything and everything and if you didn’t know any better you’d think he was in the prime of his life.

Recently however, he’s been prescribed some pretty strong new medication by a new endocrinologist. While he adjusts to the new medication, his night pills give him waves of nausea. This is normal and expected and usually manageable when we are home because he sleeps through most of the symptoms. BUT when you travel across the globe and night becomes day, that nausea now becomes a day problem instead of something you can sleep through. And thus the reason Payam has been sick every morning of our trip. Poor guy!

You’d think I’d be more understanding but I’m a go-go-go kind of traveler. I hate wasting time and money AND Payam is pretty good at fooling everyone that he is fine usually. So sometimes I forget that he is sick.  If I could go back in time I would manage my expectations and schedule in an intentional down day, or two! I would send myself off on tours by myself and stop pushing everyone else to go with me. Sadly, it’s too late now. But I have learned my lesson and I will apply it in the future, believe me! 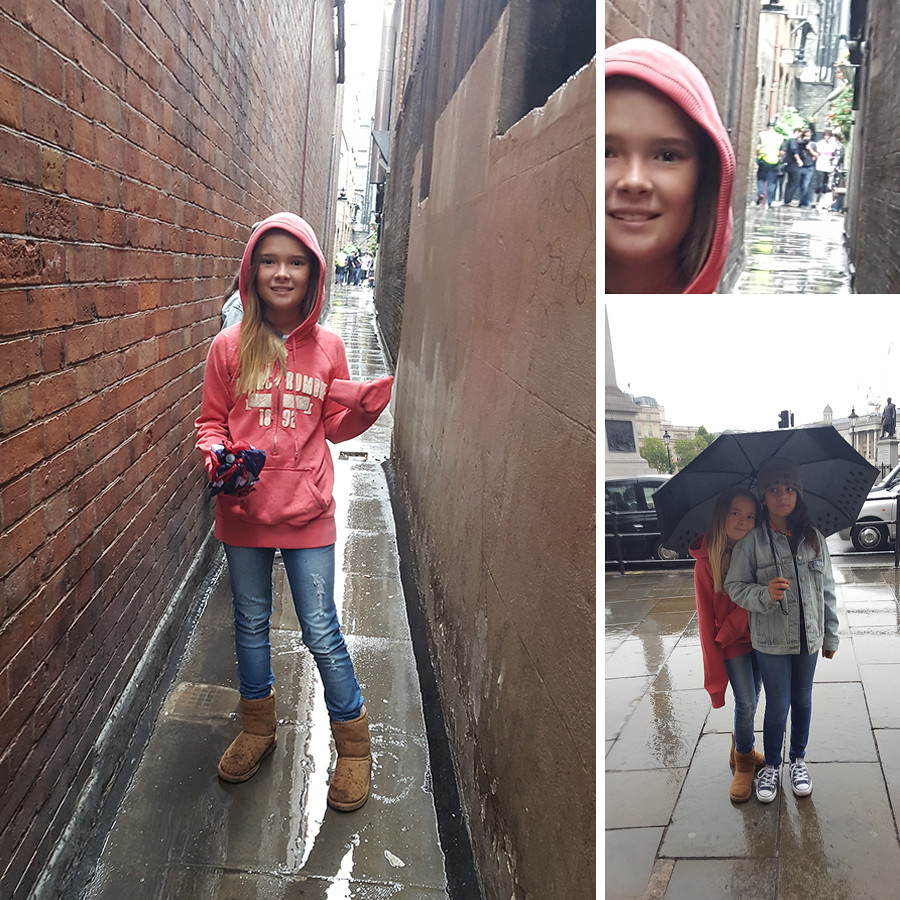 Back to screwing my head on straight: I finally accepted that Payam wasn’t going to be in the mood for any touring and exploring in the morning. It just wasn’t happening so I took the girls and we did our thing, like we often do at home! We are a crew. We always go off and get doughnuts and treats just the three of us so why not do that in London too!

I wasn’t up for exploring any new parts of town (still too scary) but I was up for taking the girls and myself out to coffee at our new favorite cafe, Notes, on the other side of Trafalgar Square. It’s just a few blocks away in the super trendy (thirty-something-party-time-hang-out) neighborhood of Soho. Joon loves sugar with a side of hot tea and Bug loves iced lattes.  I know, bad for both of them but we were on vacation so I looked the other way and downed my own hot latte.

On that particular morning it rained!!! The girls and I were so excited to have traditional London weather that we’ve read and seen so much about. Wet stuff from the sky! Where are our boots and umbrellas?!  Of course we didn’t pack boots or umbrellas with us (who has room for that?!) so we bought one umbrella (that changes color when you get it wet!) in this really cool bookstore by our hotel and two more from a souvenir stand outside.

Then as we were walking with our new umbrellas down the sidewalk (or pavement as the Brits say) we spied this really narrow alley. It was literally about three feet wide and you couldn’t even walk down it with your umbrella all the way open. The girls were immediately intrigued and begged to walk down it. It was long and dark and you couldn’t really see what was at the other end but it was mid-morning so I wasn’t really afraid of meeting Jack the Ripper or anything.

BUT THEN!!!! Halfway down the alley, as the light from the other end started to shine in onto our path, we saw AN ACTUAL STABBING!!!! I kid you not. One guy in a black coat groaned and bent over suddenly while another man standing beside him thrust something into him (or maybe it was the other way around). There was no blood and all we could see were movements and coats but I failed to mention that above this whole scene was a sound boom and a man with a big movie camera and several fancily dressed crew members to the side.

Yeah. We walked straight into a movie set. Here’s a close-up of the shot I took of Bug with the movie crew in the background super pixelated.

We stood there in our tracks fascinated. We didn’t know whether we should keep walking towards the crew or turn around and head back the way we came. There really was no other way to go and we were obviously right in the middle of their shot because we could see the big black shiny circle of the movie camera pointing directly at us and everyone was staring at us. No one shouted at us to move or anything so we hovered there for a bit until I was overcome by shyness and hustled the girls back the way we came.

We saw a stabbing!! A stabbing in London! The irony of it was not lost on the girls because all of us have been watching the news and we are all well aware of the terrorist attacks in London lately. We’ve gotten the warning travel emails. We’ve seen the barricades at the bridges and the entrances to squares to keep cars from running over people. We’ve shied away from crowds and hurried through touristy areas, trying to keep the statistics of us being involved in anything threatening to a low number. But we were also fascinated by the thought of a real movie being shot right in front of us. The girls begged to go around and watch from the other side but by that time we were running out of time so I had to say no. One side of a movie-making scene would have to suffice. Who knows, maybe we’ll be befuddled tourists in the background of some blockbuster someday. You let me know if you see us. 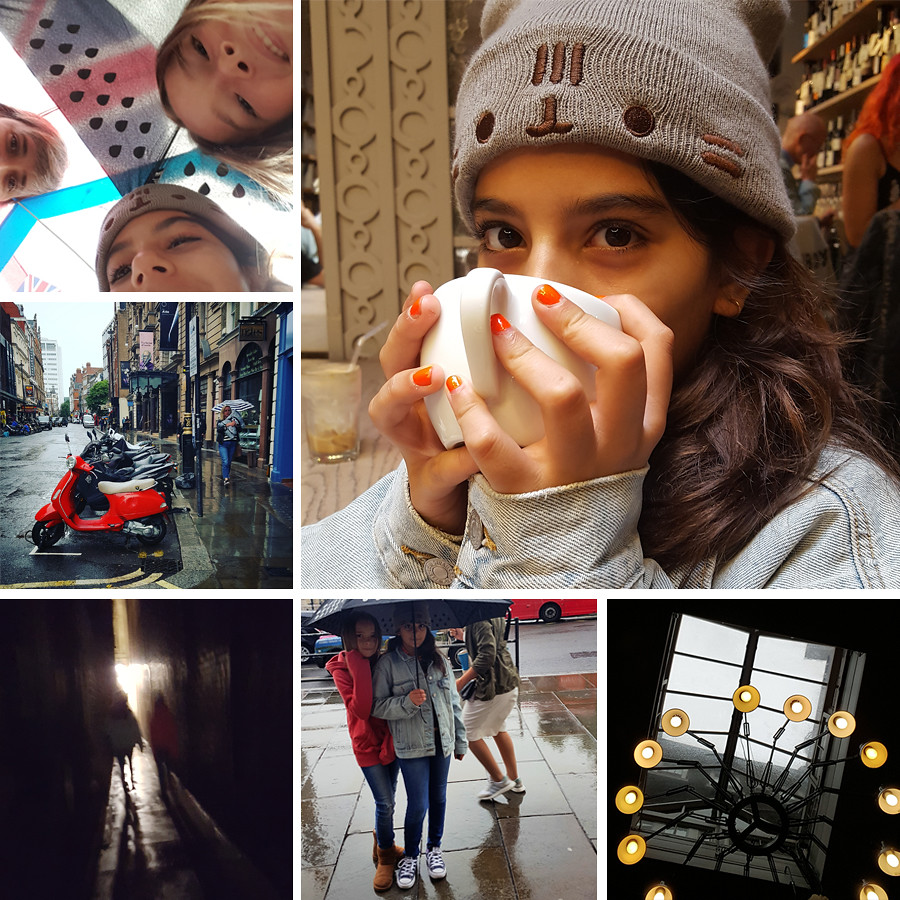 But we definitely have a good story for when we get back home! 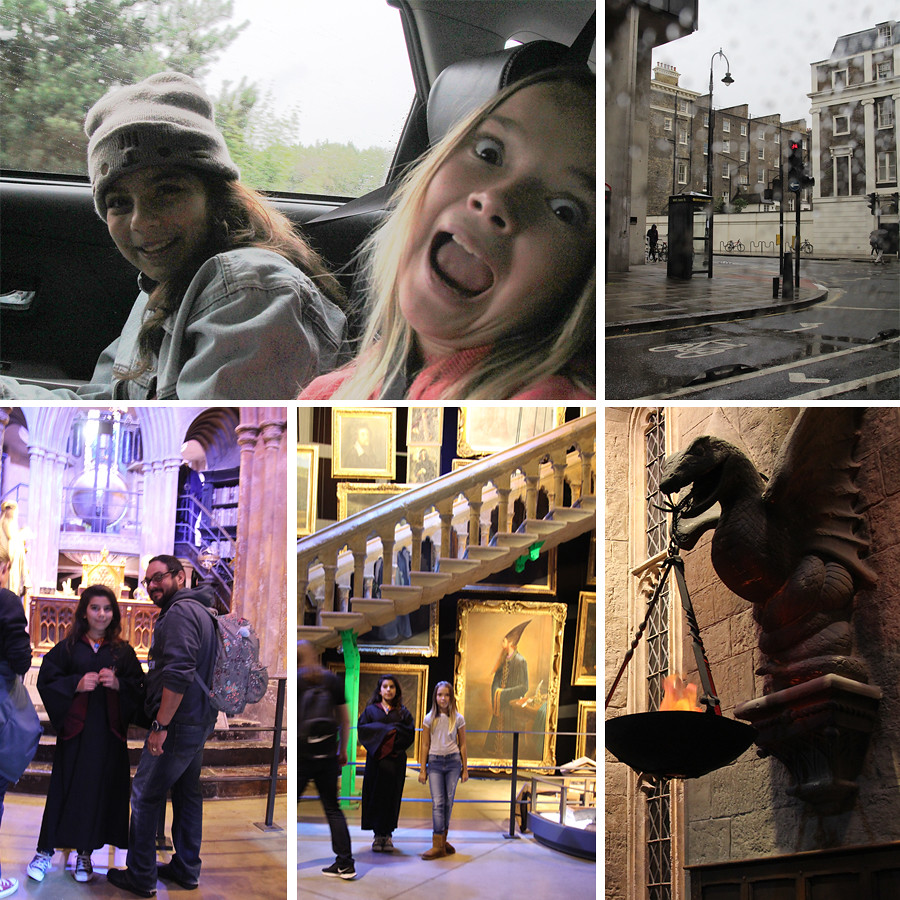 We hurried back to the apartment to tell Payam all about our adventure and get ready to head off to The Warner Brothers Studio Tour of the Making of Harry Potter ! What a crazy day, right?

We were a little excited about Harry Potter if you can’t tell from the photo above. I’ve read all the Harry Potter books but I desperately need to read them again because I have speed-readers syndrome and I remember next to nothing of them. Joon is a huge fan, which you already know from her Harry Potter birthday party. Bug likes to think she’s a Slitherin and Payam knows next to nothing about the whole Harry Potter phenomenon.

Here’s a fun fact: The Harry Potter Studios are 20 miles away from Central London. Guess how long it takes to get there? It can take anywhere between 45 minutes to two hours if there is traffic! We failed to research that fine point. Since we are from Southern California and don’t use public transportation very often, we just assumed an uber would be the fastest way to get there. We allowed ourselves one hour because we thought it would take 30 minutes and we like to be early. Bah-hah-hah!

So the fact that the girls and I took a little bit longer than we should have due to the whole stabbing incident  to get back to the the apartment was a leetle bit of a problem.

Good thing we had the fastest Uber driver in all of London. He was so fast! His Waze traffic app was going off every five seconds because he was ignoring the speed limit regularly and probably getting himself fined by uber. He was great though.

We had a lot of uber drivers while we were in London (because we are idiot Southern Californians who don’t know how to take a bus or a subway) and some were really happy and talkative while others were stone cold.  They barely said hello. It was like they might catch something if they engaged in any conversation with us. Whatever. We got over it. 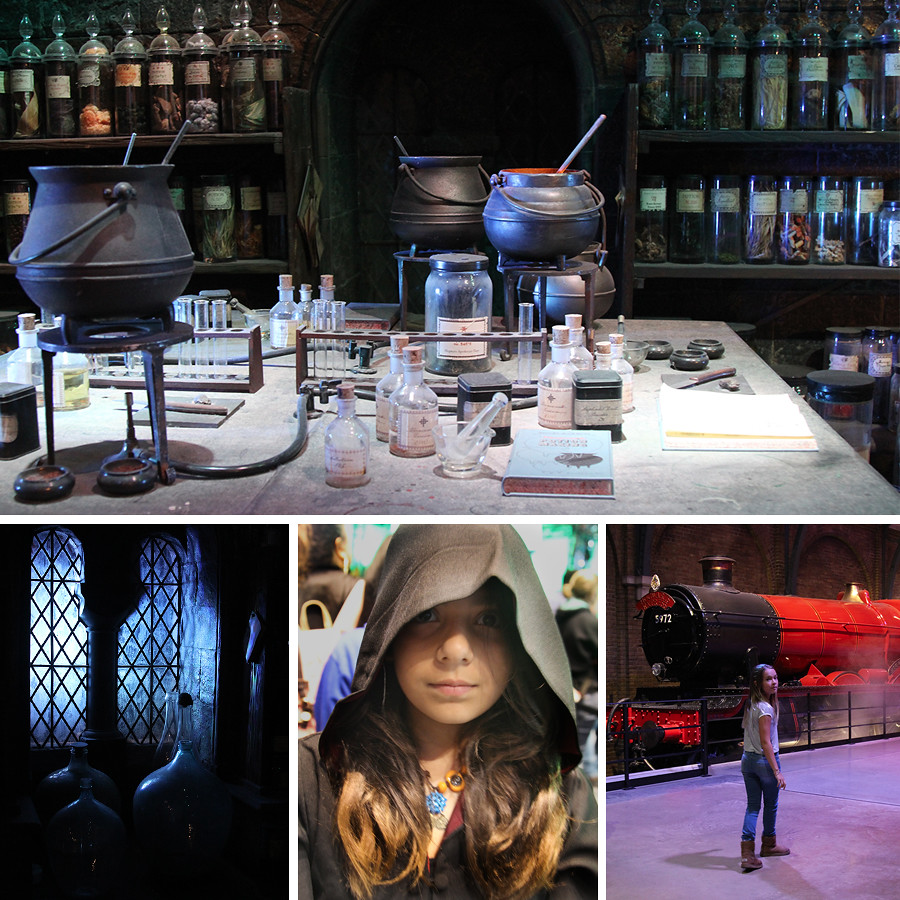 In a streak of good luck, lots of side routes and expert driving we made it to Harry Potter Studios only ten minutes late.  Can you believe it?!!  And they totally let us in, in spite of the threatening warning notices that our ticket slots were not guaranteed. Those Brits. All scary warnings and no follow-through. We were so relieved. The whole crazy drive there we were sweating it that we’d pay all this money and have to turn around and go back. 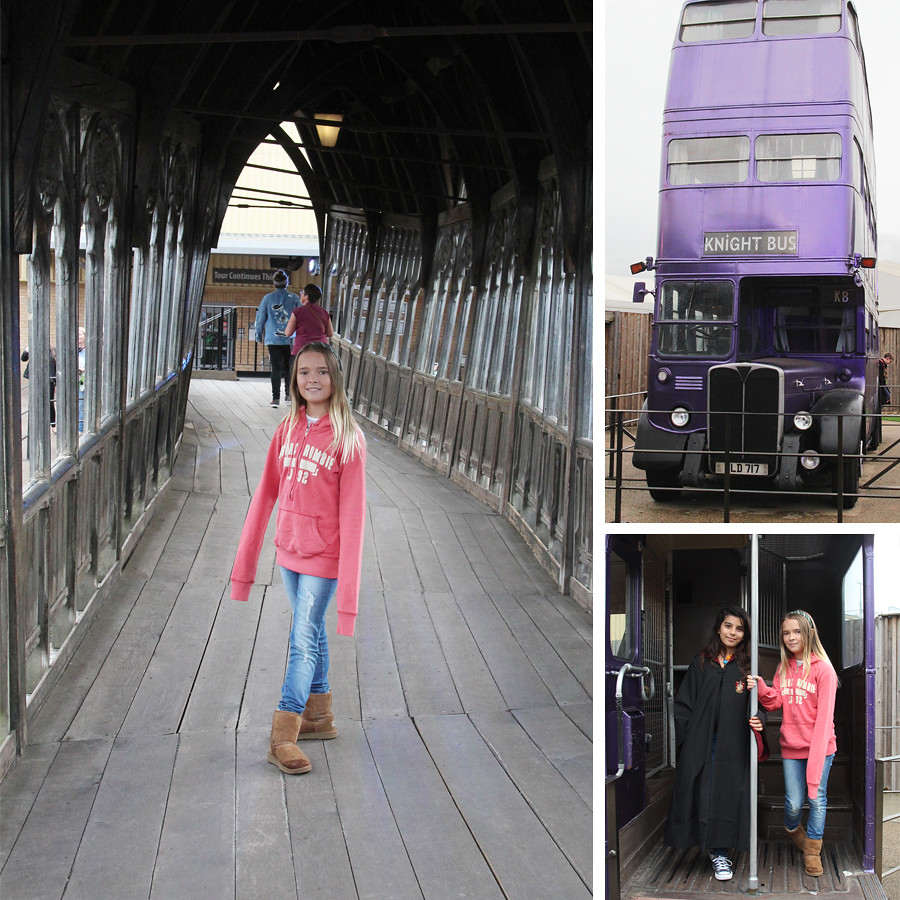 Harry Potter Land was AWESOME. It isn’t a theme park with rides or attractions like Universal Studios Wizarding World of Harry Potter theme parks in Orlando and Hollywood. It’s a giant five warehouse tour of the behind-the-scenes making of the movie and it is a-maz-ing. Well worth the money, I say.

I really loved how they gave credit to every artist, craftsman, sound crew member, animal trainer, animator… etc etc etc that worked on the movie. It really was a way to let everyone shine instead of the usual movie stars stealing the show. Of course they were part of it too but you really got to see what a great big happy family all the crew members became over the course of TEN YEARS. Ten years! That’s a pretty good gig for a lot of people and by the popularity of the studio tours it doesn’t really show much sign of stopping. Harry Potter is wildly popular and probably will continue to be so for a really long time. 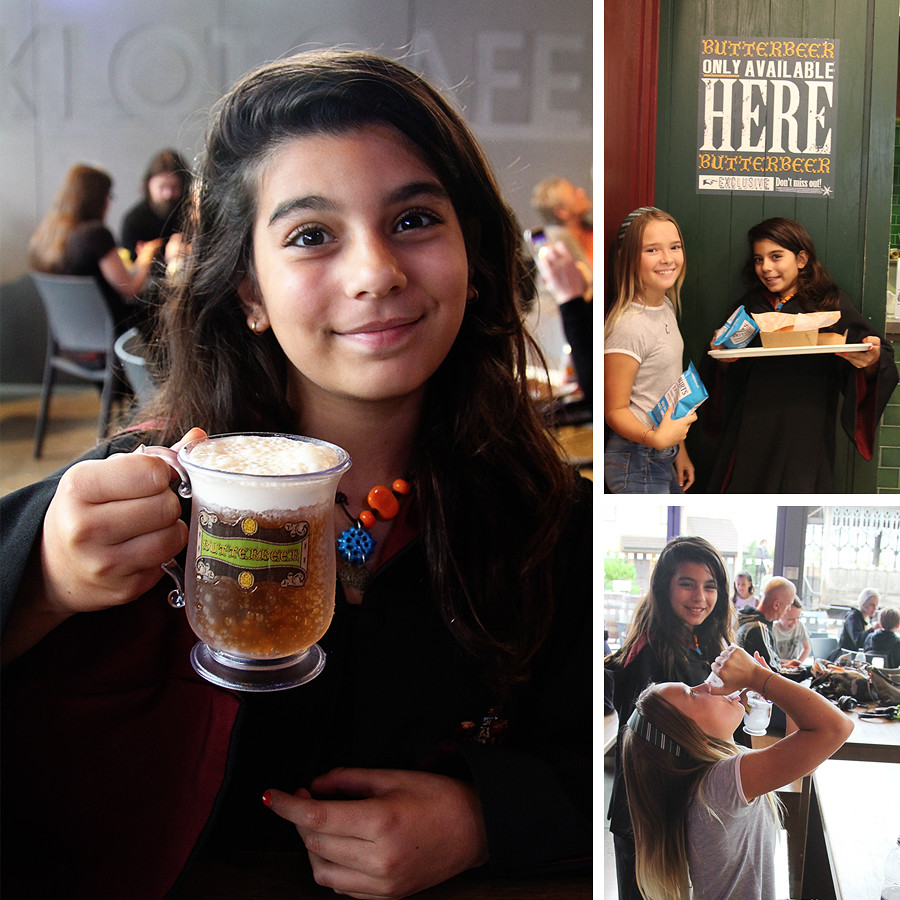 All because of Butter Beer! Just kidding. But I will say Butter Beer was a pretty big draw for my kids and every other kid who likes sickeningly sweet drinks. No, I didn’t try it. I hate sweet drinks! Why would I do something stupid like that? So that was fun. 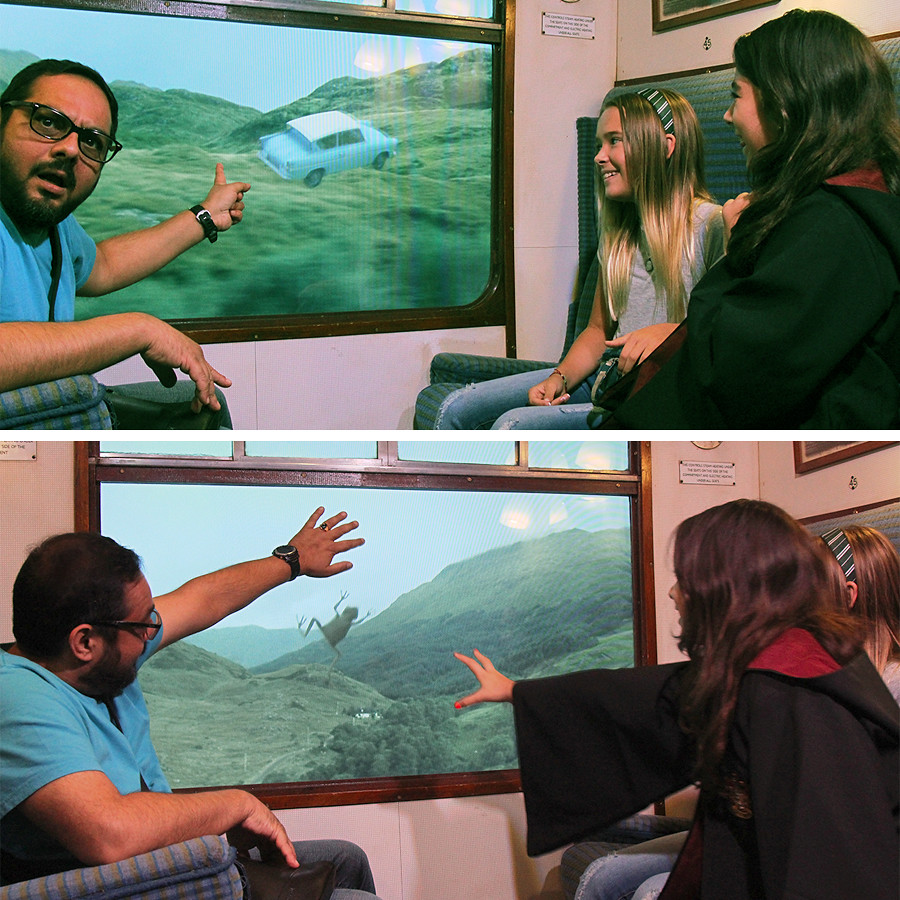 Everything was fun. Even Payam who hasn’t read the books or seen the movies had a great time. He’s probably the best actor in the family and he had an especially fun time interacting with the green screens. Me, I’ll keep my day job. 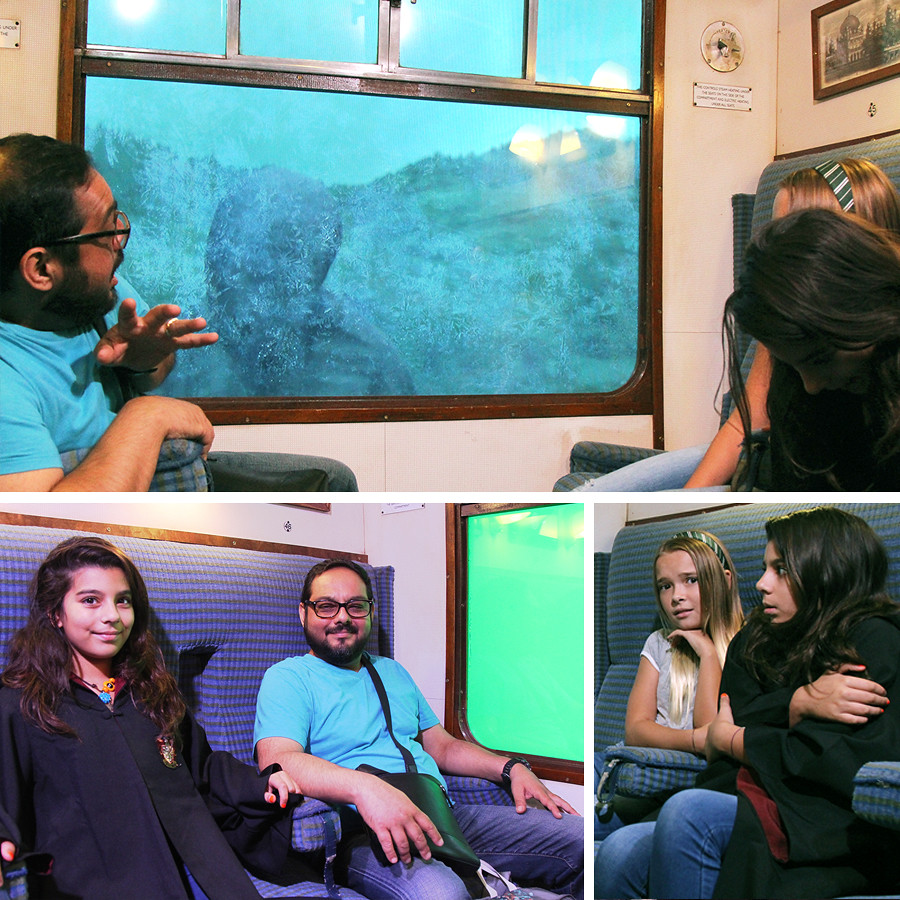 Yes, that’s a dementor sneaking up outside of our railcar window. Don’t worry though it was done really well and just spooky enough to be fun. I think even toddlers would have a blast on this tour. It really is amazing for all ages.

As an artist, I really was impressed with all the attention to detail and the behind-the-scenes how-it’s-made aspect. You know I love making things. I would die of happiness working on these movies. It must have been a dream ten-year gig. You could take days going through this tour examining every detail and learning about everything. They say most people take two hours to walk through the tour but one guy spent FOURTEEN HOURS (!!). I don’t think I could do that but I can definitely imagine it. It was all crazy interesting. Every little bit. 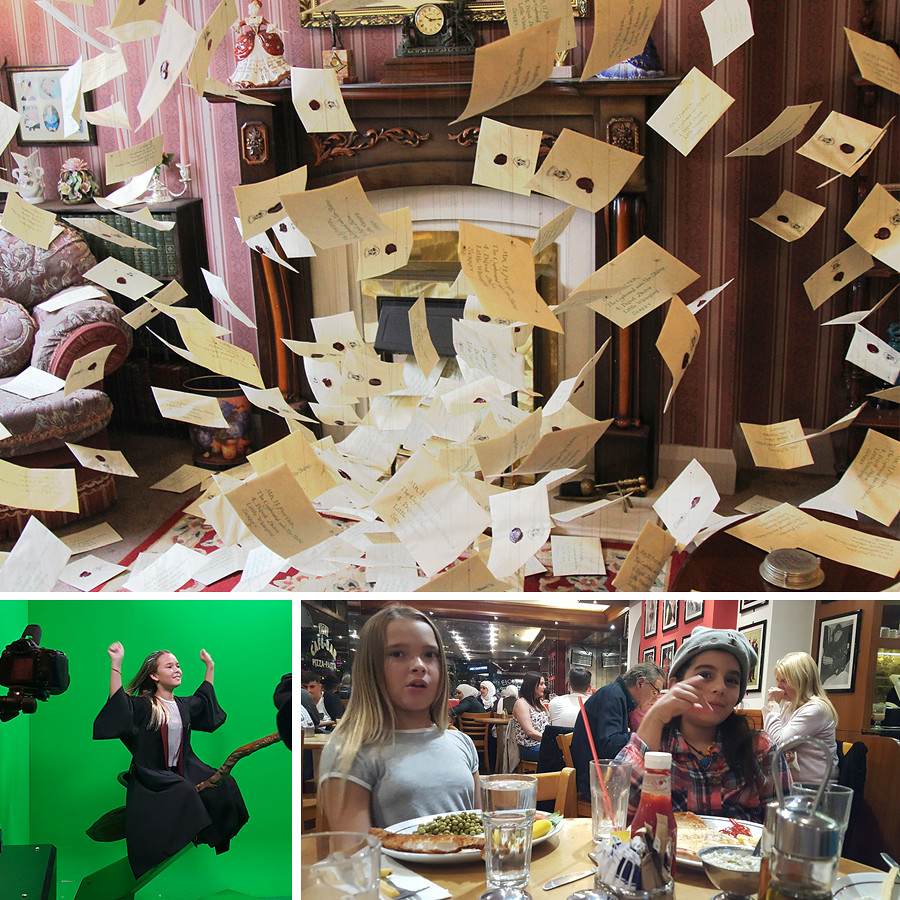 I’m wrote up a really big post about the Harry Potter Studio Tour over at alphamom.com if you’d like to read more about it. It really was exceptional and I’m so glad we added it to our travel plan.  Four cheers for Harry Potter!