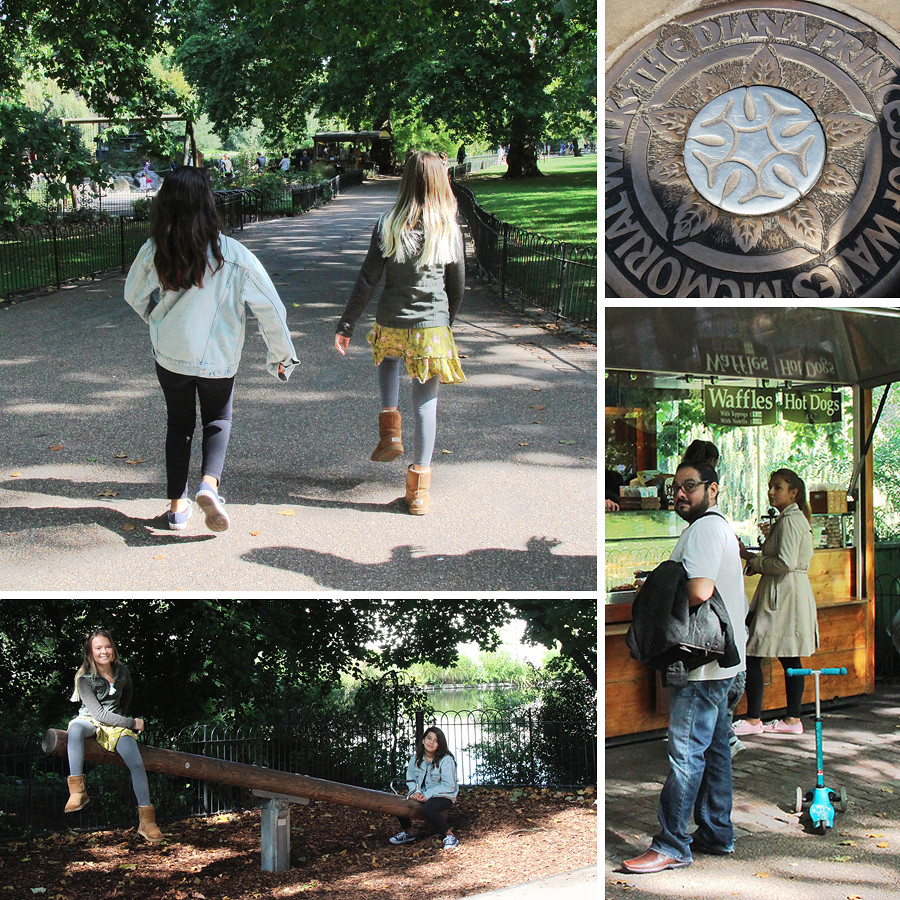 On our last day of touring London we decided we should go see Buckingham Palace. The tour guide on our hop-on-hop-off bus tour had told us we shouldn’t miss it and we were in luck because while the Queen was on vacation, the staterooms were open to the public. So off we went!

We got there a little early so we took a stroll to a nearby park. The girls were enthralled. They wanted to stay there all day. In fact during the tour all they wanted to do was go back to the little park we’d been there earlier. They weren’t impressed with the gold banisters or gifts from Africa, Princess Diana’s cassette collection or even tea cakes from the Royal Cafe. Nope. They just wanted to go back to the park. That park in particular. 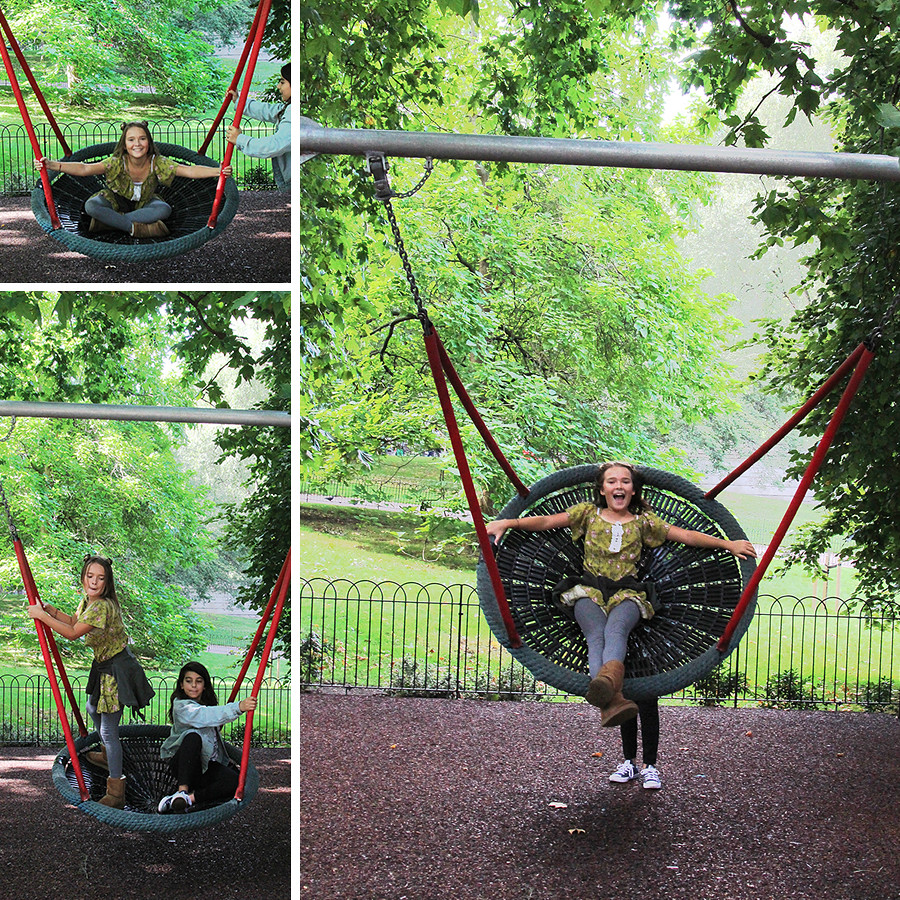 Which I can’t really blame them. It was pretty cool park but I get the feeling that all parks in London are like this. They make our parks seem like boring weak sauce. There were woven swings, see-saws, wooden snail sculptures, metal chimes that you could hop on Dance Dance Revolution style, AND GET THIS!!!! Coffee shops. I’m not even kidding you.  I’m sure it has something to do with the proximity to the royal palace and the fact that Princess Diana probably brought her children here but still!!! How many days had I pined for an iced coffee in the park while I pushed toddler bug on the swing hour after hour. Oh man. Raising kids in London seems like a walk in a much better park! 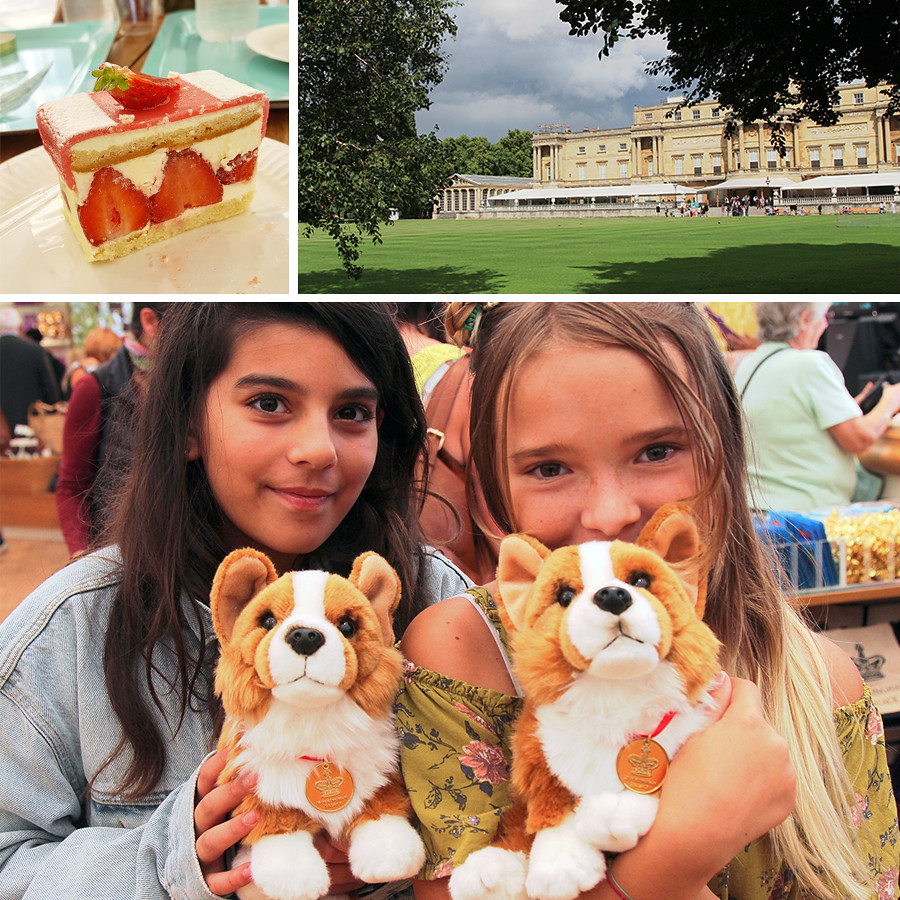 We couldn’t take any pictures inside the palace which was kind of refreshing for me since my life is ruled by whether or not I can capture a moment on camera. Does it really happen if I don’t instagram it? That is the question.

We walked from room to room (some of them even un-airconditioned!) and listened to little headsets telling us this and that about the royal rooms. It was pleasant. The girls seemed to enjoy it too. 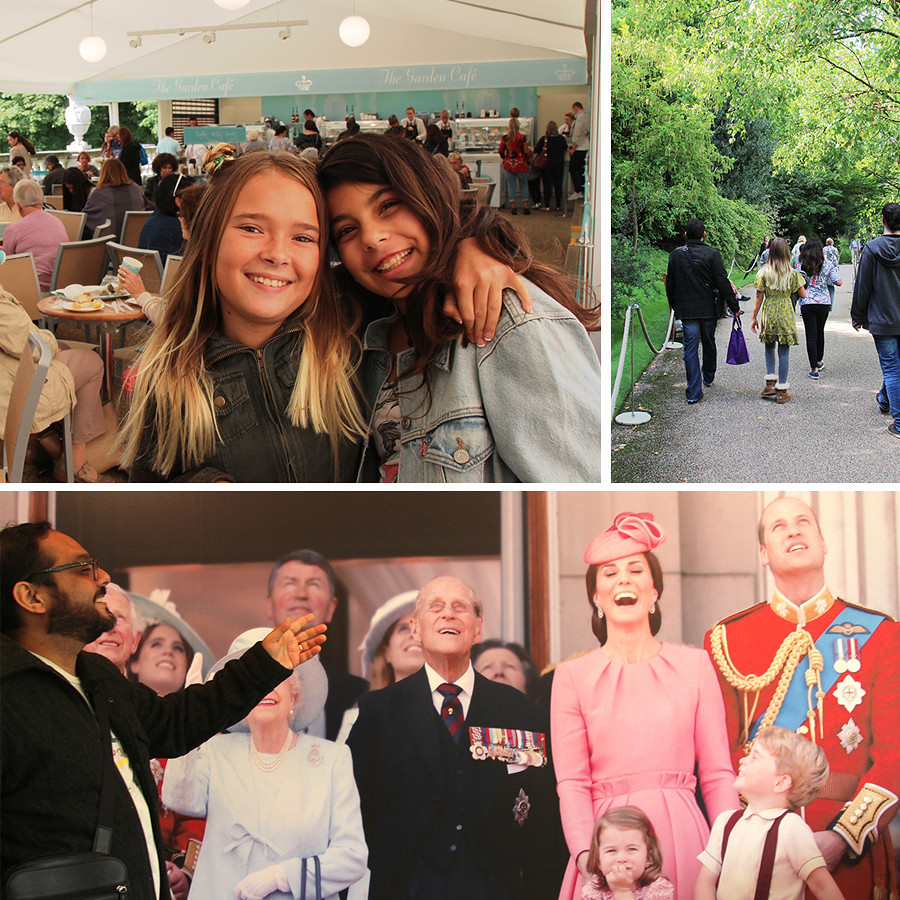 But we were all happy to get to the end and grab a quick bite of princess cake and princess ice cream. The cafe was so cute. I would love to be the graphic designer that designs the queen’s merchandise. Everything is in baby blue with white scallops and dainty script. All pretty and twee. 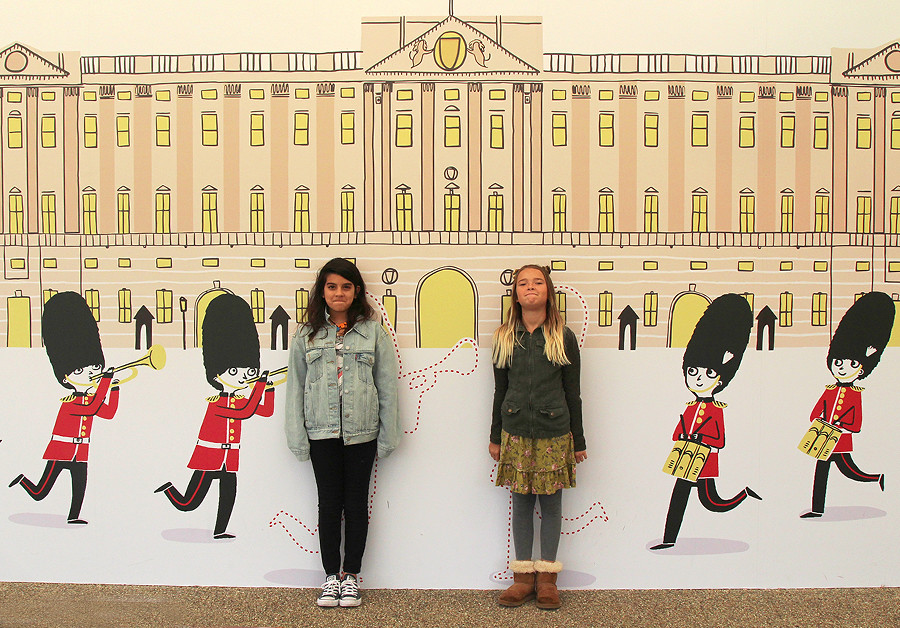 The kids reluctantly posed for me in the “kiddie” area. But they weren’t too old to both want stuffed corgis. I swear these girls will be fussing over stuffed animals when they are teenagers. They LOVE anything fluffy and stuffed and create elaborate imaginary lives for their pets that include making special voices and who’s knows what else. It’s sweet though. It makes me happy that they have each other and aren’t doomed to only-child adult activity for the rest of their lives. Bug has always been an old soul. I mostly attribute it to the fact that she’s only had adults around her her whole life. So it’s refreshing when she acts like a kid with her “stepsister” by proxy. 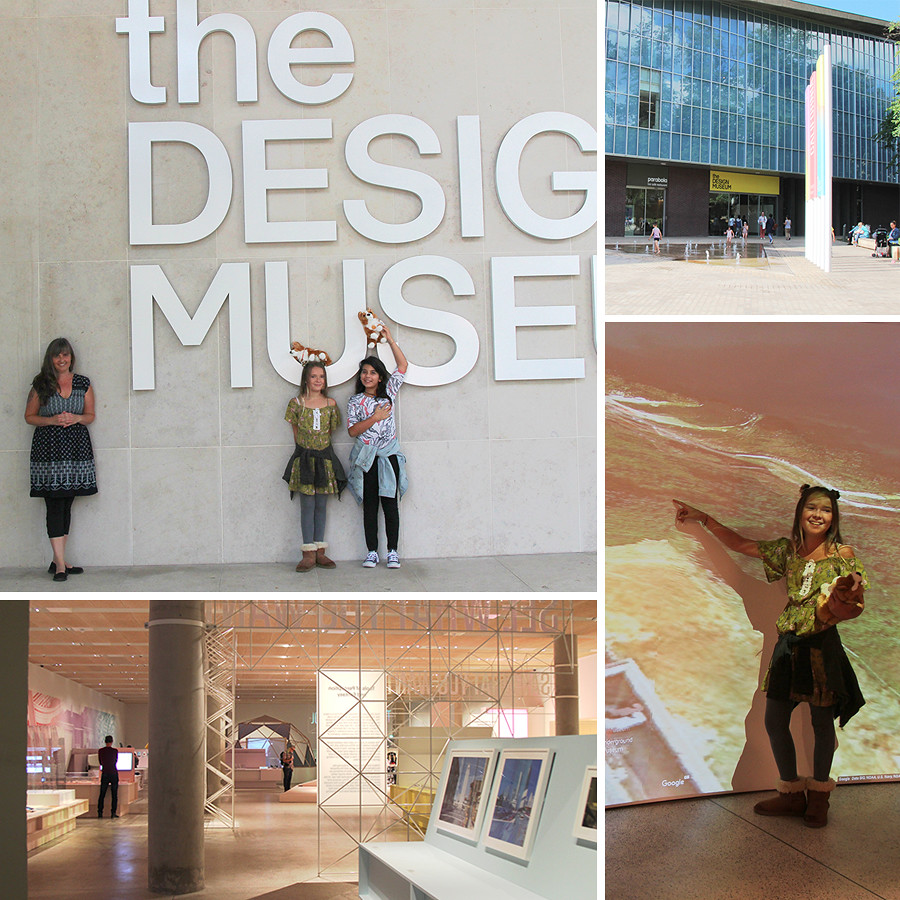 After Buckingham Palace I forced everyone to the go visit the Design Museum near Kensington Gardens. The kids were not into it at all and just wanted to go back to the park by the palace already. I convinced them that the Design Museum was next to a really big park that was being dedicated to Princess Diana herself and if anyone loved children and would have a really great park to pla,y in it was Princess Diana. They were not convinced. 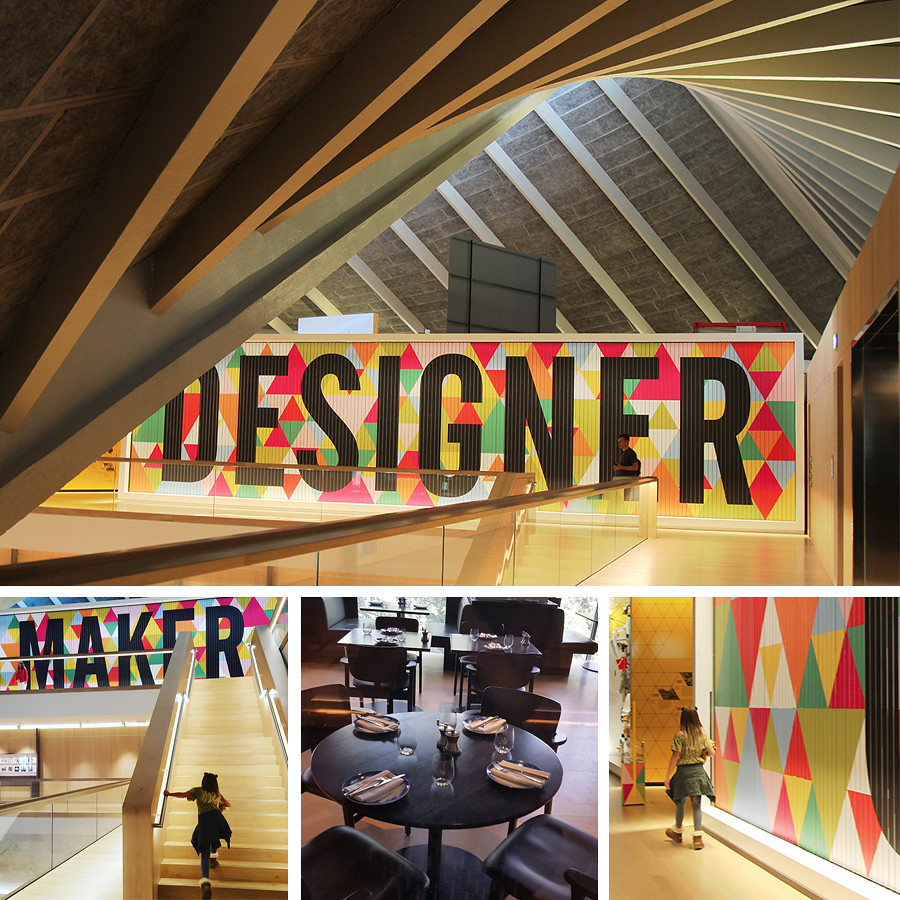 The Design Museum is in a really interesting building that used to be The Commonwealth Institute and has quite a history that you can read about here. I can’t say that I have read everything and completely follow it but I will say that the space itself is the most interesting thing about the museum. The exhibits not so much. 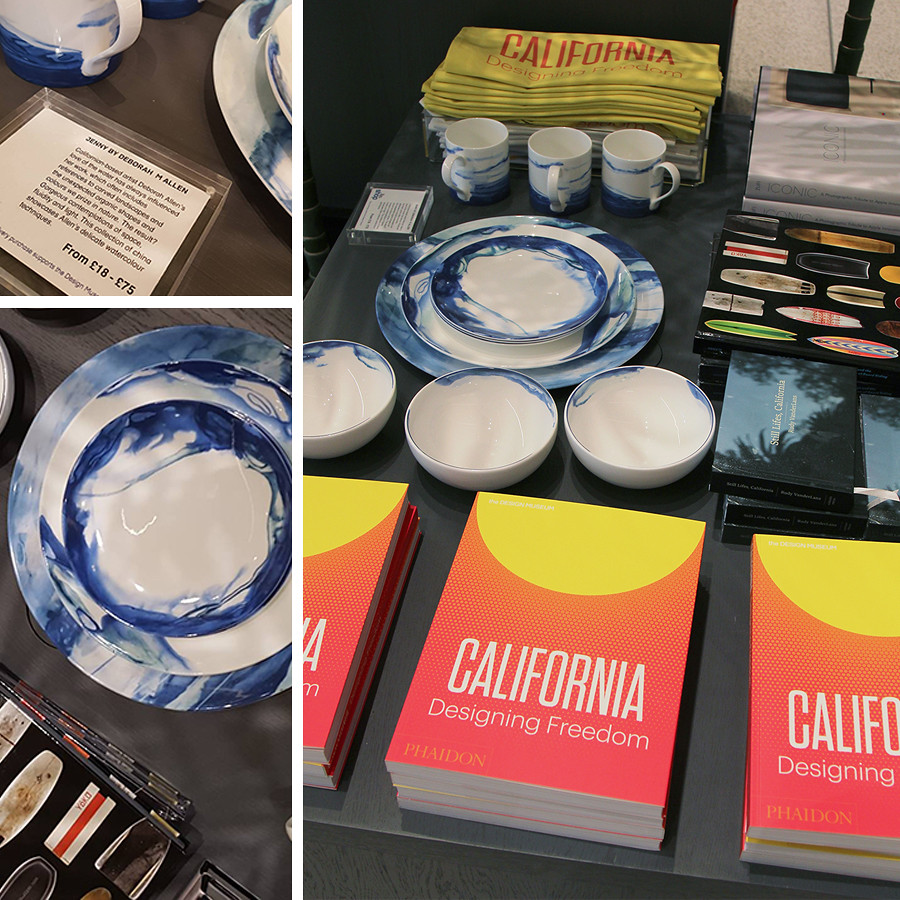 The whole reason I wanted to visit the museum was to see Deb’s dishes!!! You remember Deb and her adventure in Bone China? The restaurant in the museum serves their food on her dishes and you can buy them in gift shop. It’s all part of their exhibit on California design. It’s kind of cool to go all the way across the world to learn about design originating from your own neck of the woods. Let’s just say that Californians aren’t too shabby and have contributed some huge twists and turns in the history of design. Apple, the driverless car, video games, surfboard design… it was pretty cool. Not as captivating as parks though. 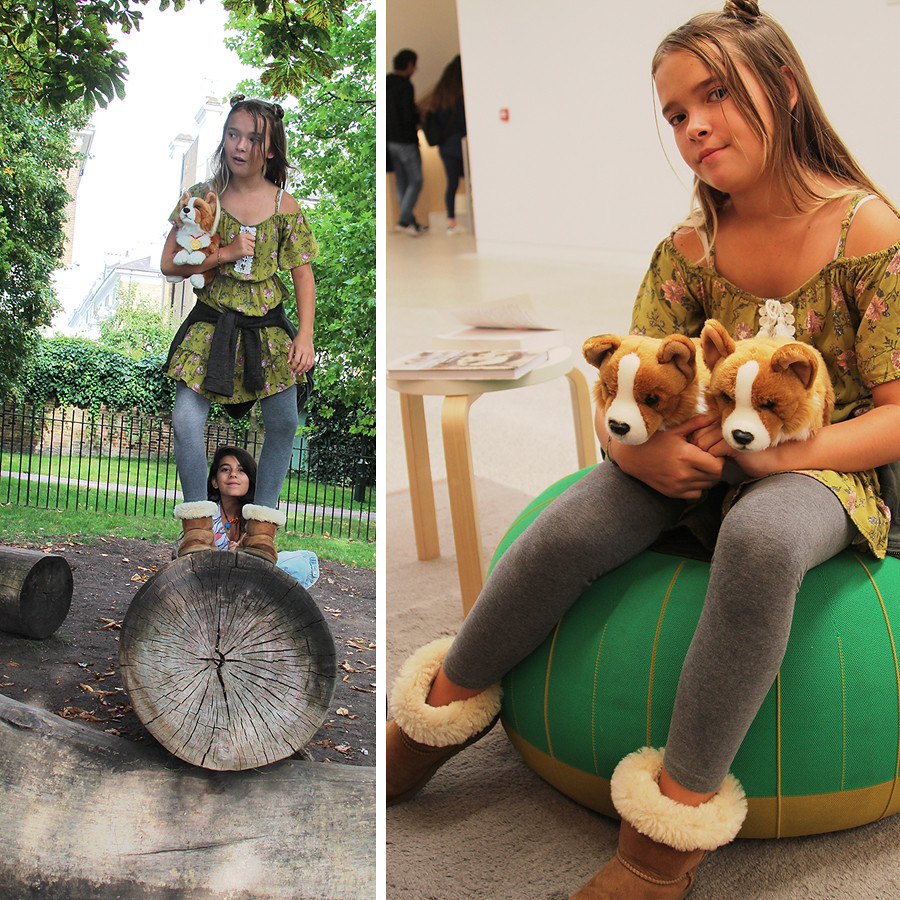 After The Design Museum we went directly to the nearest park we could find. I thought we would make our way to Kensington Gardens somehow since we were so close but we got stuck in Holland Park instead which was magical in it’s own way. We never made it to Kensington Gardens which by the way was being dedicated to PRINCESS DIANA ON THE MEMORIAL OF HER DEATH THAT VERY SAME DAY!!! We totally missed Kate Middleton, Prince William and Prince Charles all because we decided that Holland Park was way too much fun. Pfft.  Oh well. It was probably way too crowded for us anyway. But we did see another movie being filmed in Holland Park. We seem to have a knack for finding that happening along our way. 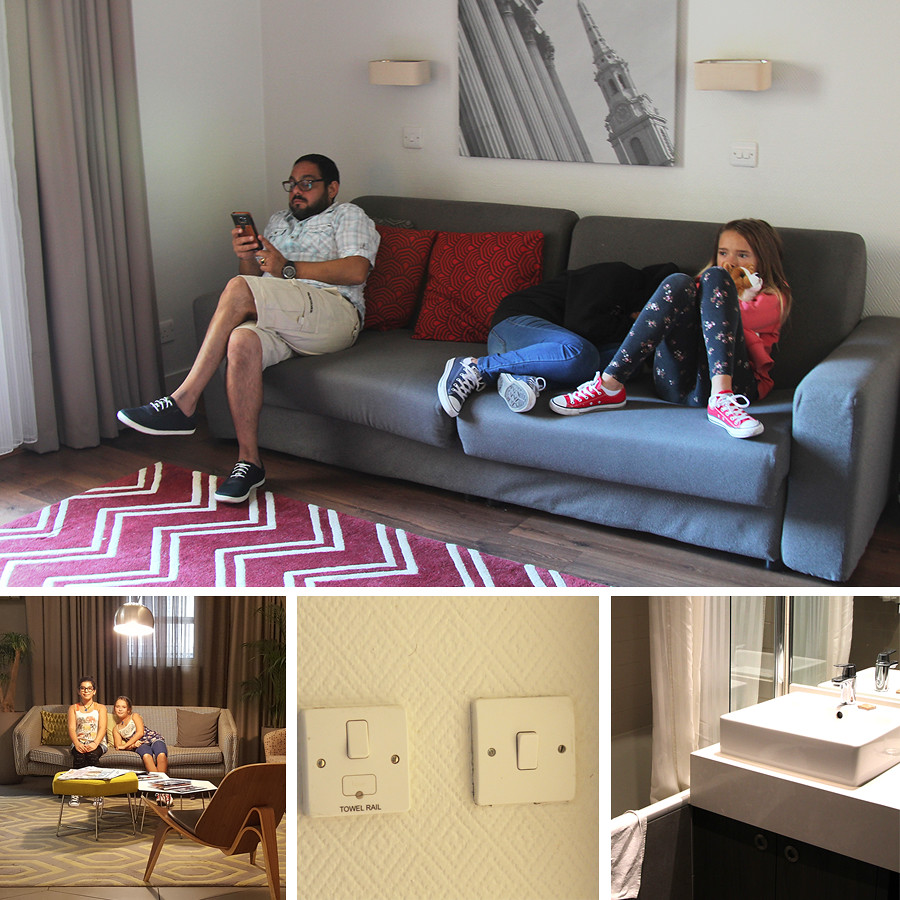 Then it was back to our hotel (after another disastrous dinner in Soho–we don’t learn) to get ready for the next day: Off to Wales!