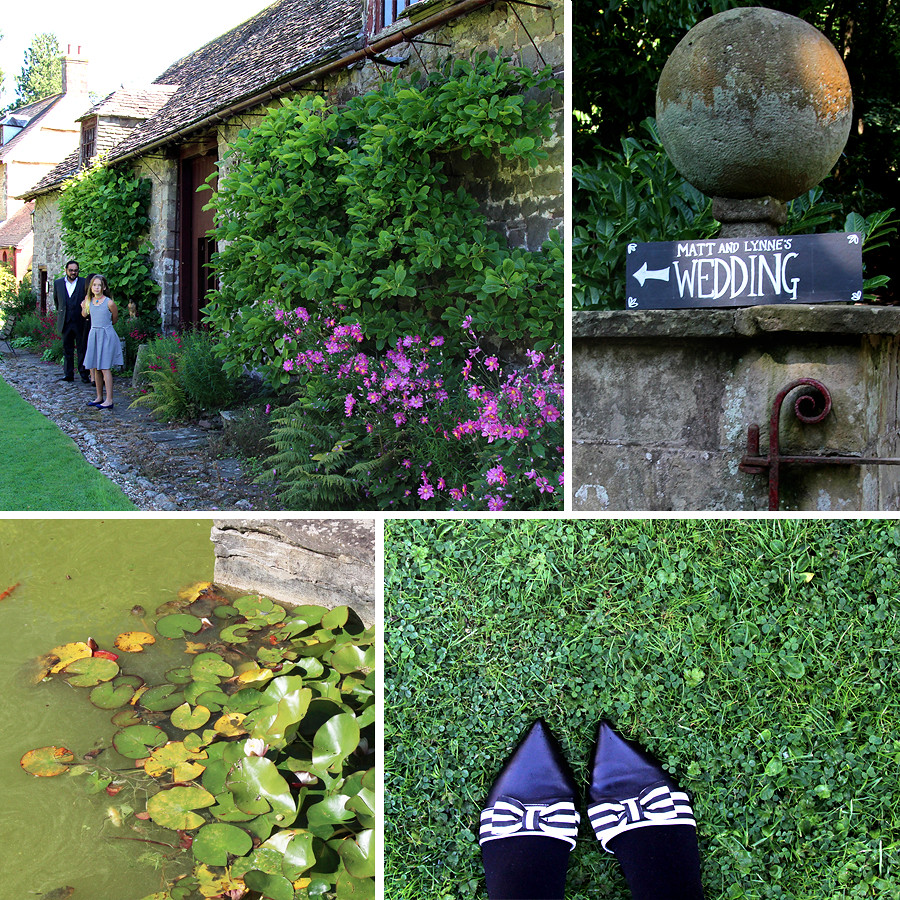 When my friend Lynne told me she was getting married and holding the reception at her in-law’s pear farm in the countryside of Wales, I had to take to my fainting couch so I could daydream about how pretty it would be. When she sent me an invitation to her wedding, I had to take to my friend the-travel-agent’s fainting couch so I could book tickets while I was fainting and daydreaming.

A wedding in the countryside where everything is green, in a foreign country with little lambs and tea!!! Wait a minute while I google earth that. Swoon! I should take the girls, I thought. It would be the perfect adventure for them. 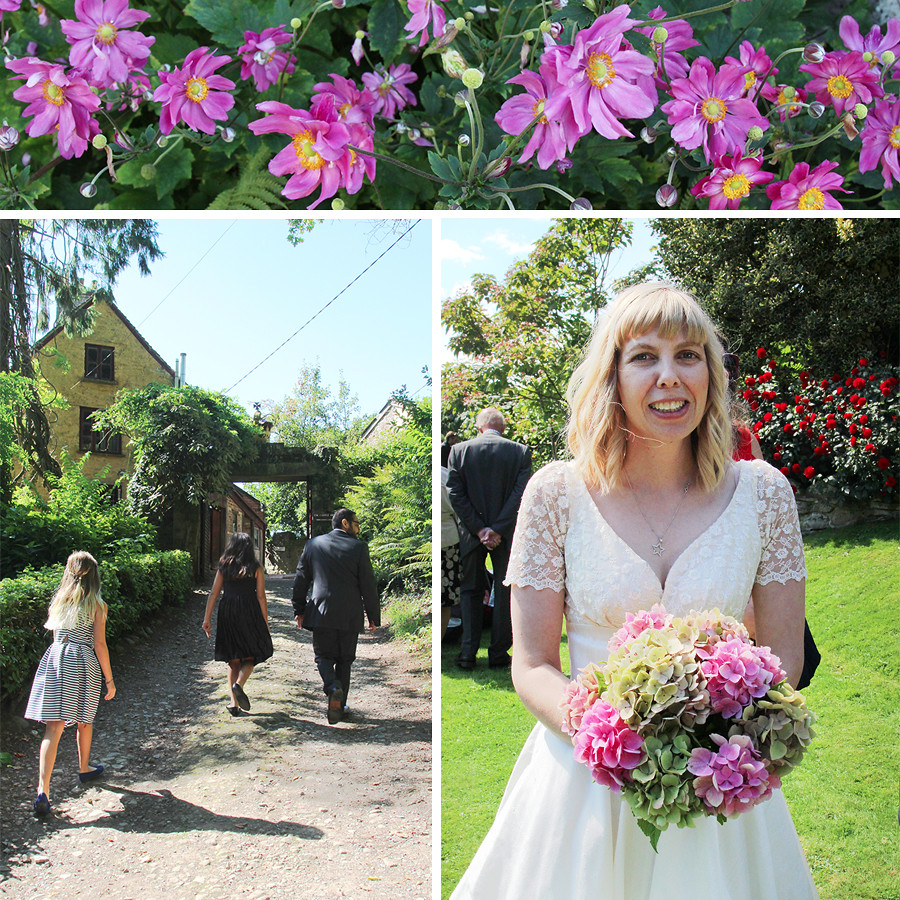 And it was. Countryside and castles and pretty dresses, oh my! 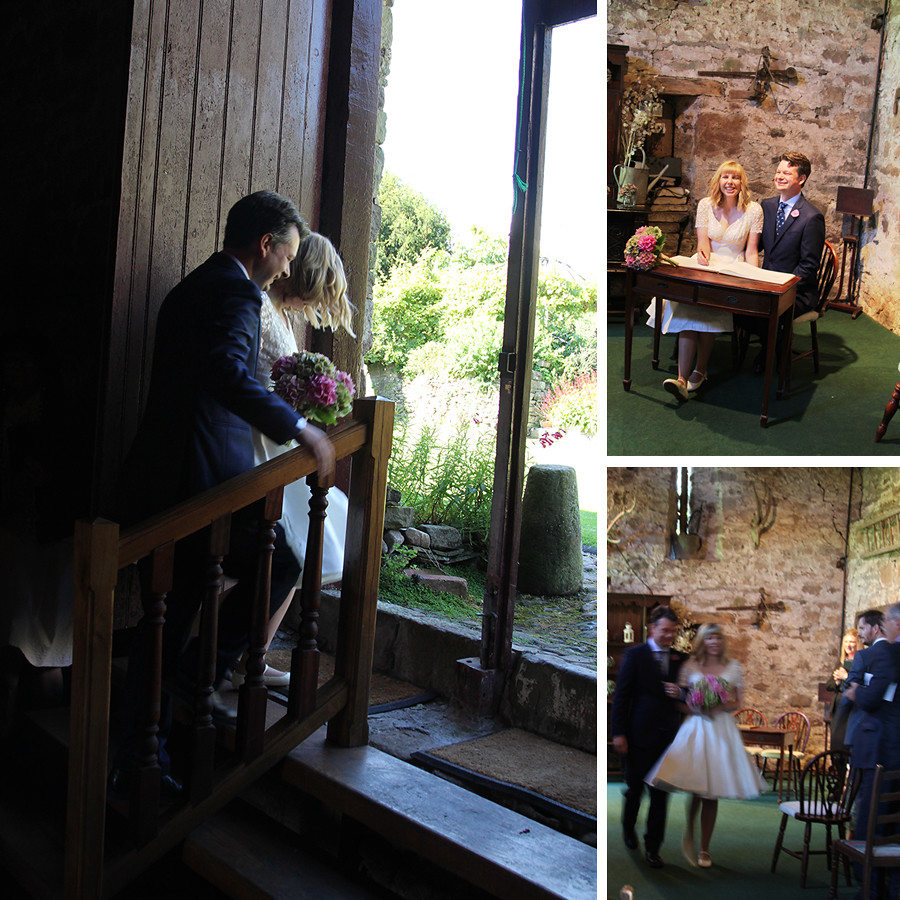 We barely made it to the wedding that was in a castle itself. I’m not sure why we were late but I’m sure there was some good reason. We did make it there all the way from California after all so I think they gave us some slack. We caught the end of their signing ceremony and had plenty of time to explore the crumbling castle walls all around after. 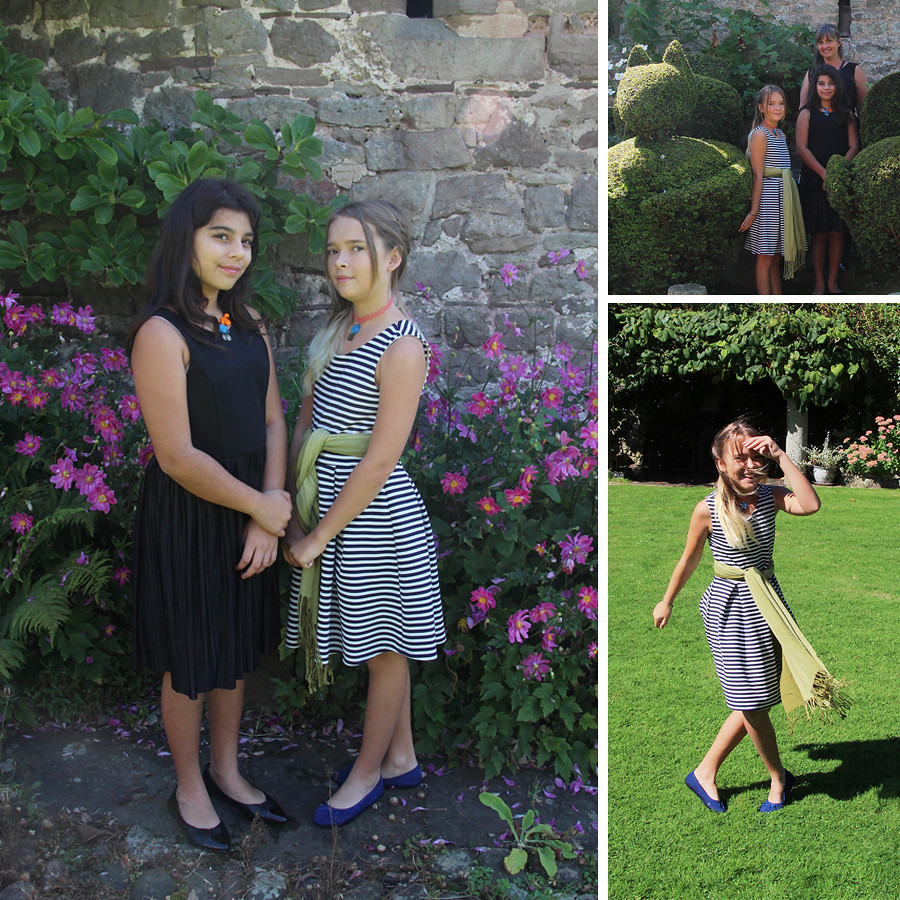 This was Joon’s first wedding she’s ever attended so the bar is now set pretty high for her when it comes to what to expect at weddings. I feel bad for whoever gets married next on a boat in the Newport Harbor. We will be bored to tears in comparison. Bug also was pretty excited about the wedding because she had to miss being a flower girl in another wedding in order to make it to this trip. I’m happy to say that she did not regret her decision (phew!). 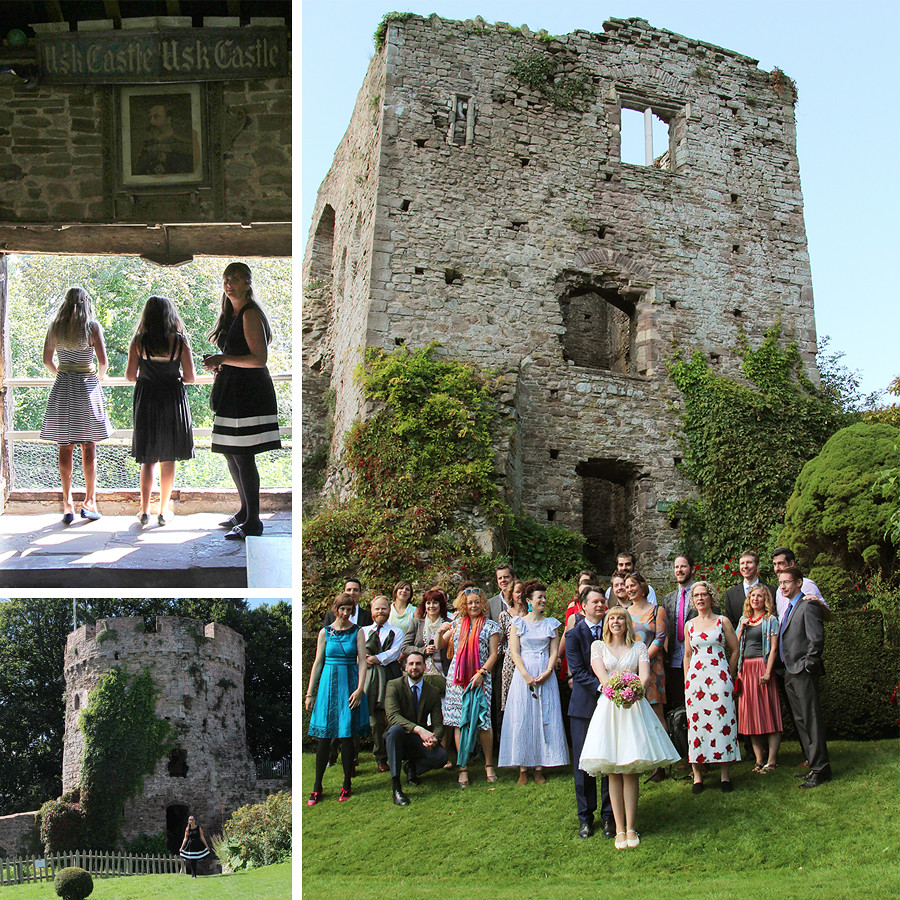 It was splendid in every way. Monte Python jokes galore. 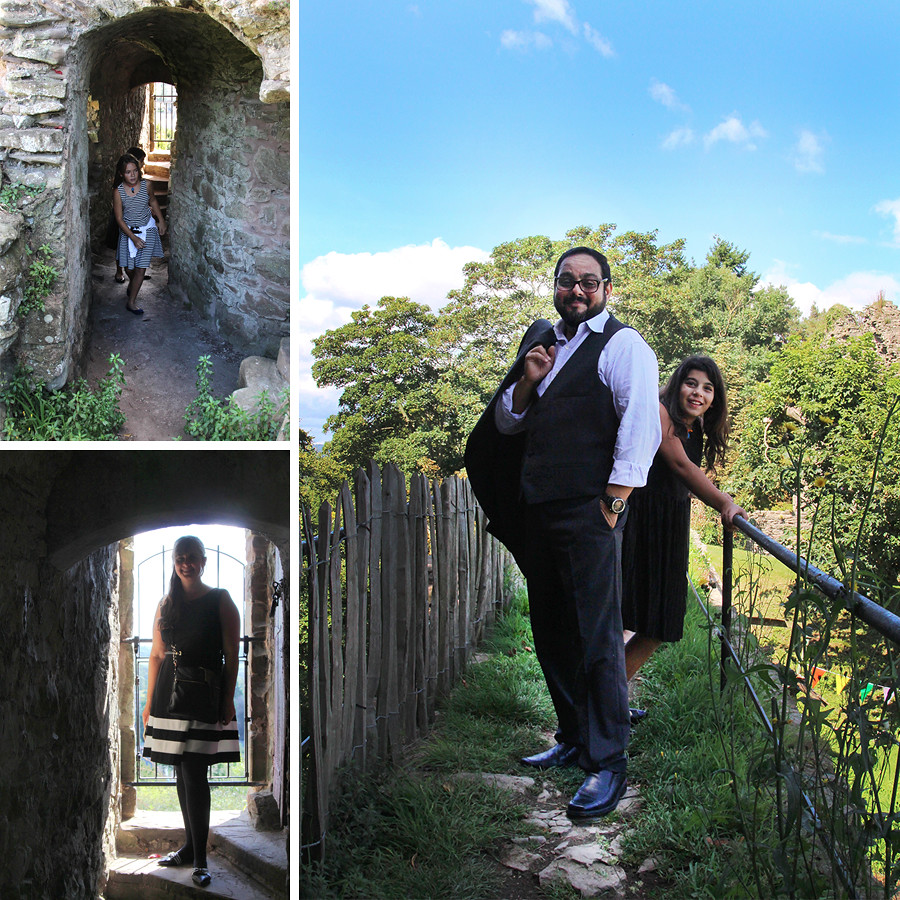 Even Mr. G.Q. enjoyed himself while posing on a crumbling bridge.

I took lots of pictures of my feet (which are all lost now because I ran out of camera space on my phone and subsequently deleted everything under the sun, including my google spreadsheets with everyone’s christmas card address).

I love my fancy shoes. They are so fancy with bows and everything but get this: they are completely flat. This is very good for me and my sore-ass complaining high arches and my boyfriend who may or may not be an inch shorter than me. 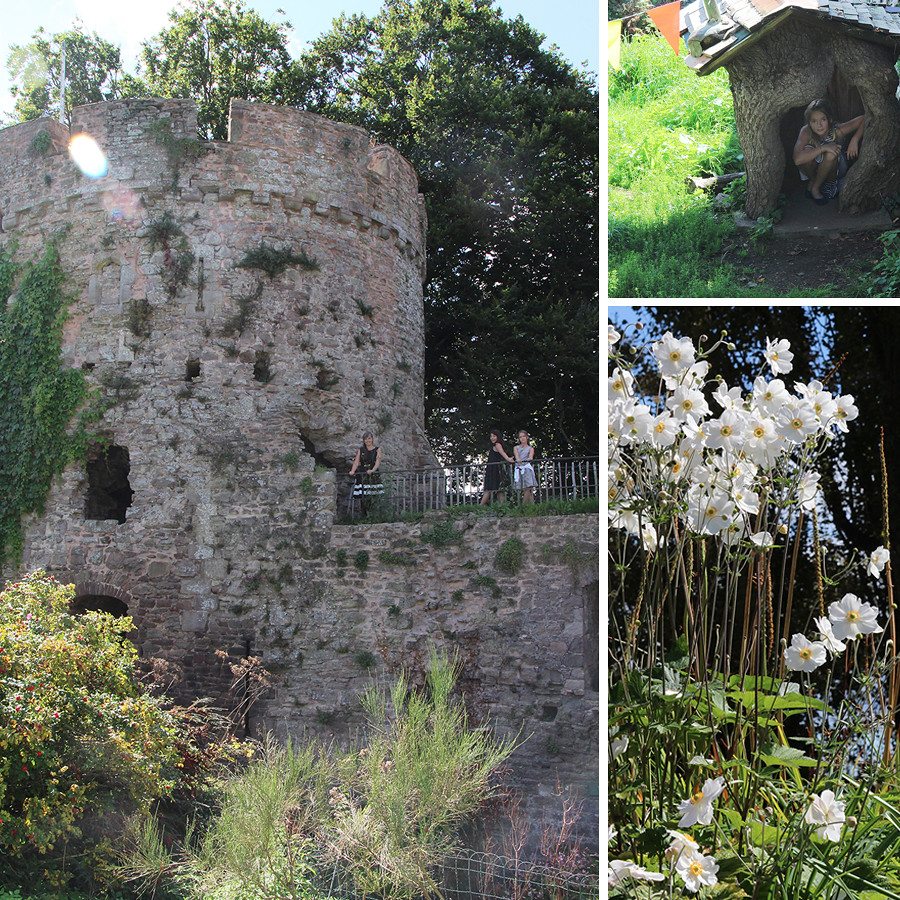 The kids were over the moon, exploring every nook and cranny. But who got lost? Not the kids. That was me instagramming every moment who forgot where we all agreed to meet up. Everyone left to go to the reception and I was somewhere over the hills and dales. 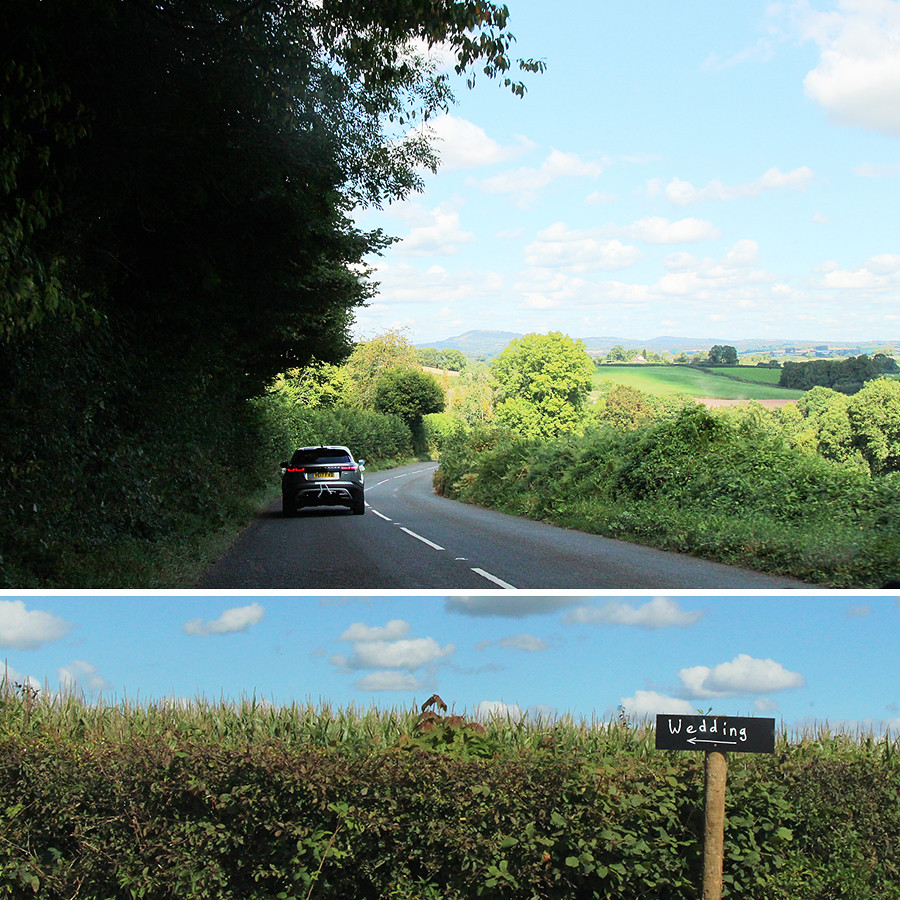 Thankfully Payam and the girls found me before the bride and groom left so we followed them to the reception because we would never be able to figure out how to get there ourselves. 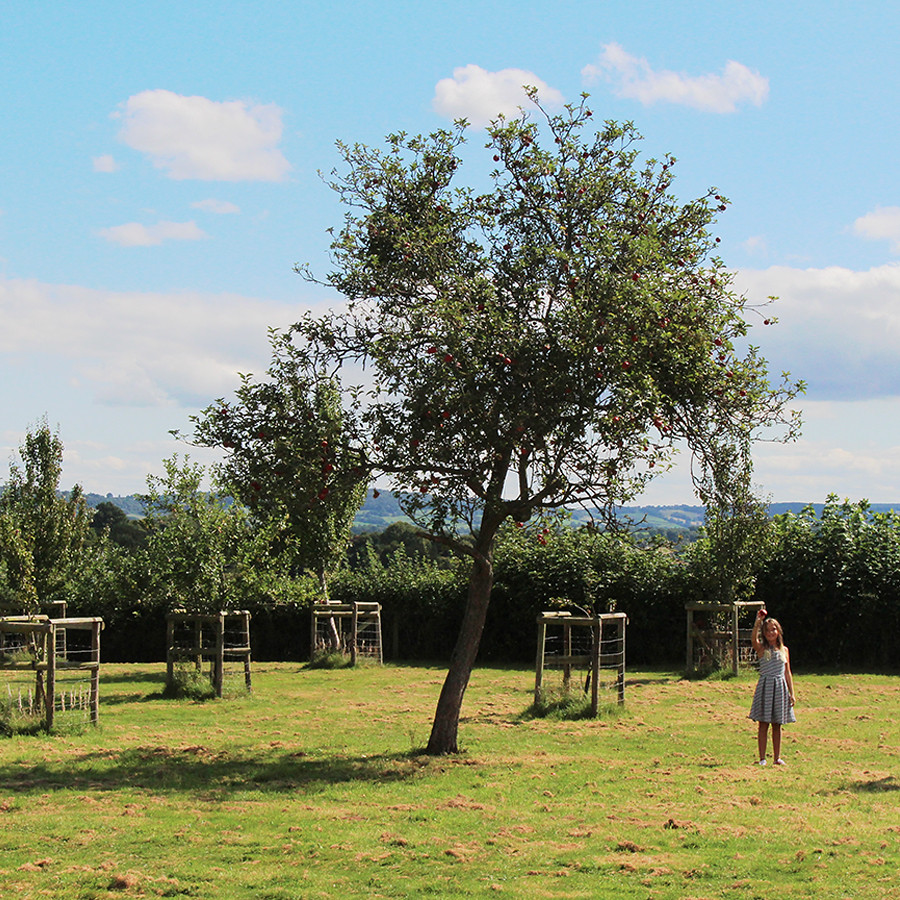 When we arrived at Matt’s family farm we were instantly smitten by the apple and pear trees growing in the parking lot. Or maybe they converted their orchard to a parking lot for the occasion. That’s probably it. Anyway Bug was so impressed because it looked exactly like her Grandpa’s yard and the climate was very similar too. She proceeded to let us all know that Wales was basically Ferndale and I couldn’t really disagree. 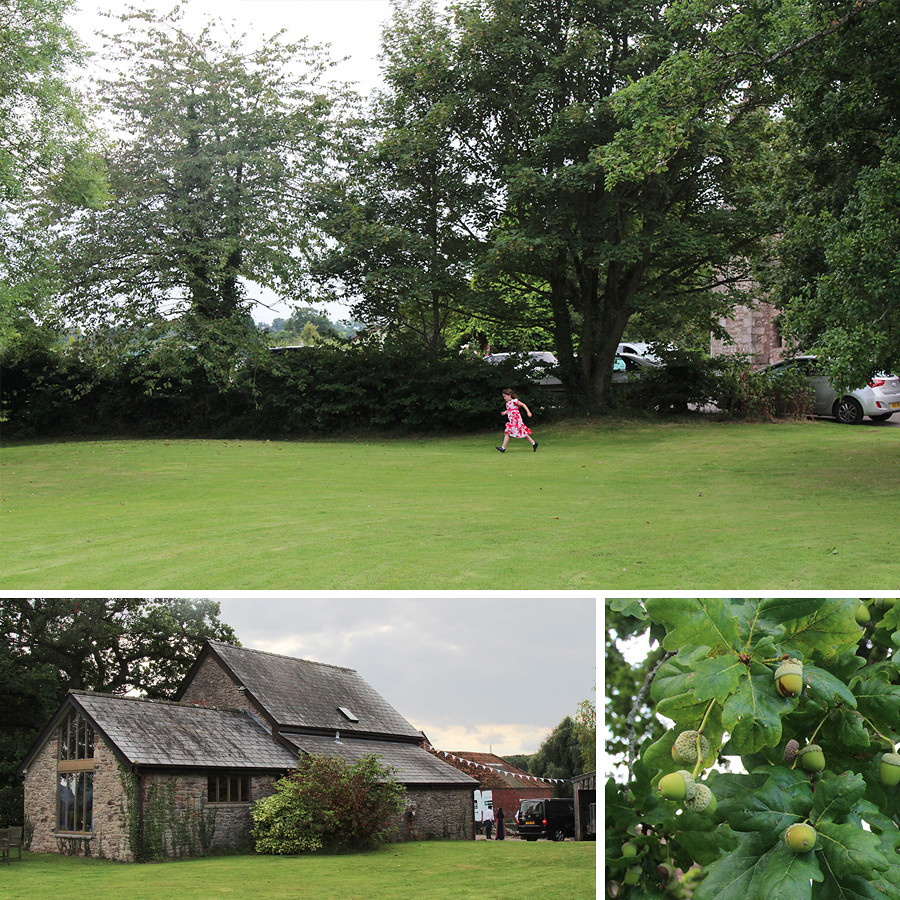 I mean, look at all that green grass to run on! And look at those little cobble stone houses! They are only 500 years or so older than Ferndale. 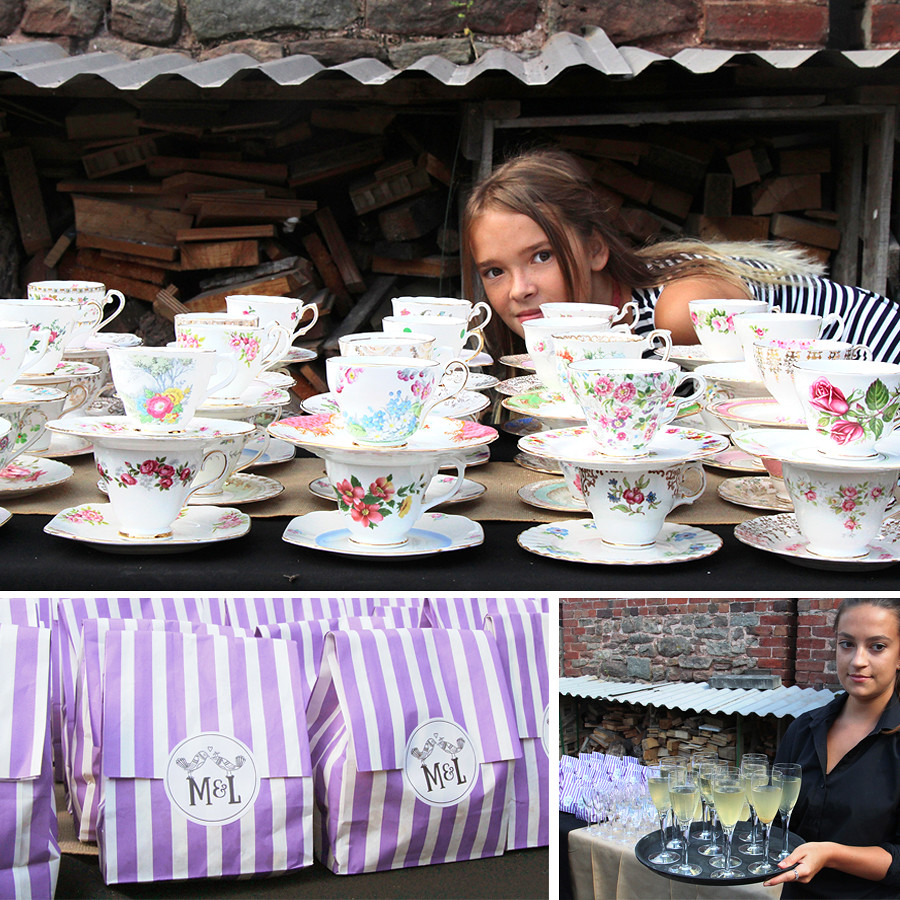 Everything was charming! From the tea cups to the hanging bunting to the little purple striped packages of popcorn for the kids and the bottles filled with homemade pear champagne for the grown-ups… I was snapping away with my camera and my phone like I was paid to be a photographer because you know me, I can’t resist all these photo opportunities!

It doesn’t hurt that my friend Lynne is an artist.  Before we left, Payam was asking me what he should wear to this wedding and I had to chuckle. Was it black tie? Not really. I told him he could wear red suspenders and a bow tie and still fit right in. It was that kind of charming. My favorite kind. 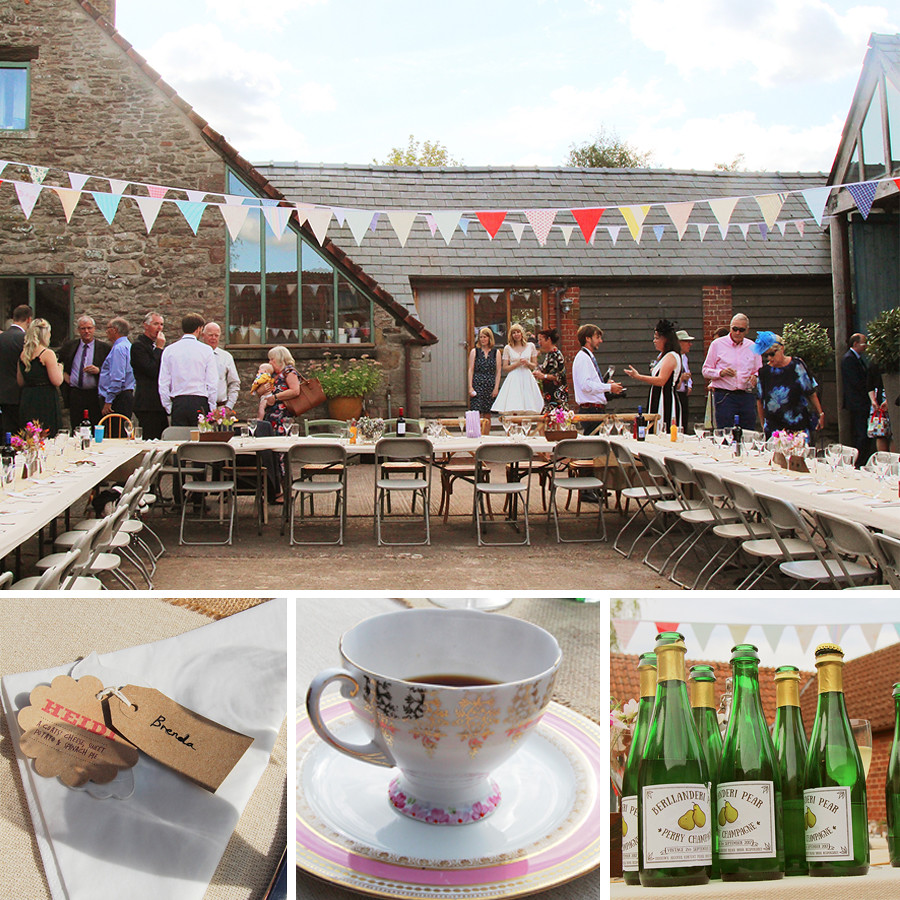 We had meat pies for lunch (very interesting and quite tasty – second picture here) and a crazy amazing homemade tiered wedding cake for desert that was so delicious I wish I had gone back for another piece or four. 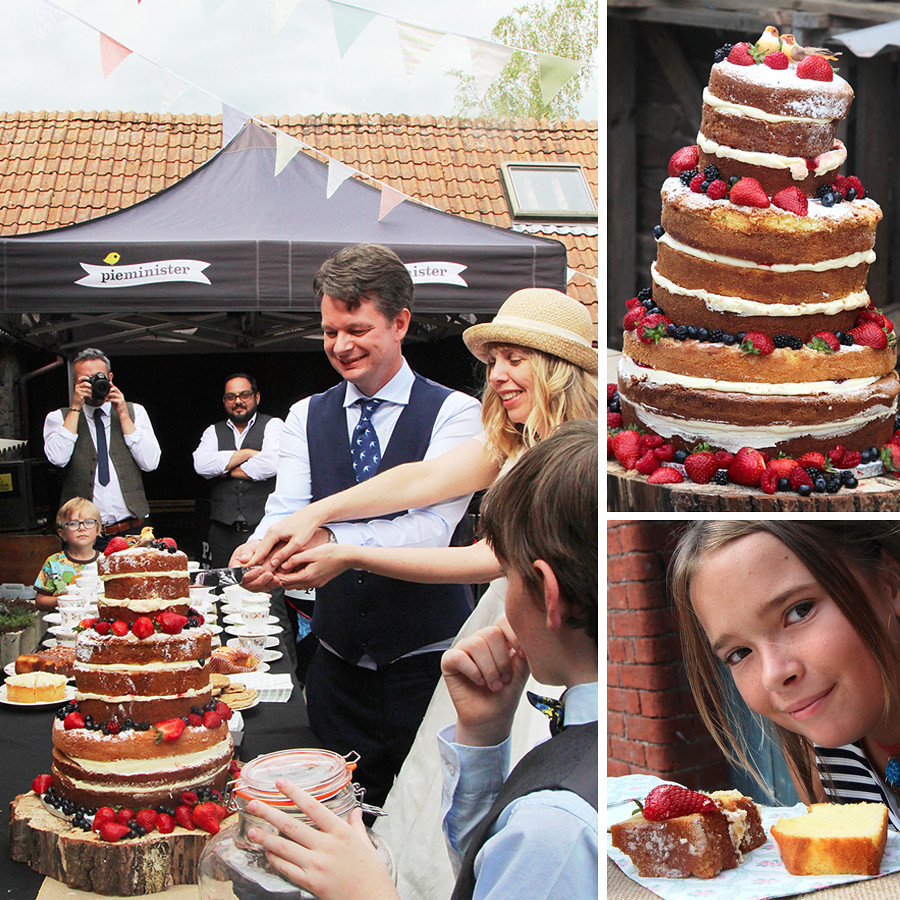 Bug ate wedding cake alone. She’s not a huge fan of Welsh food which is fine because when she is home she eats about four burgers a day. Seriously, she going through a major store-up-food-for-a-growth-spurt stage. 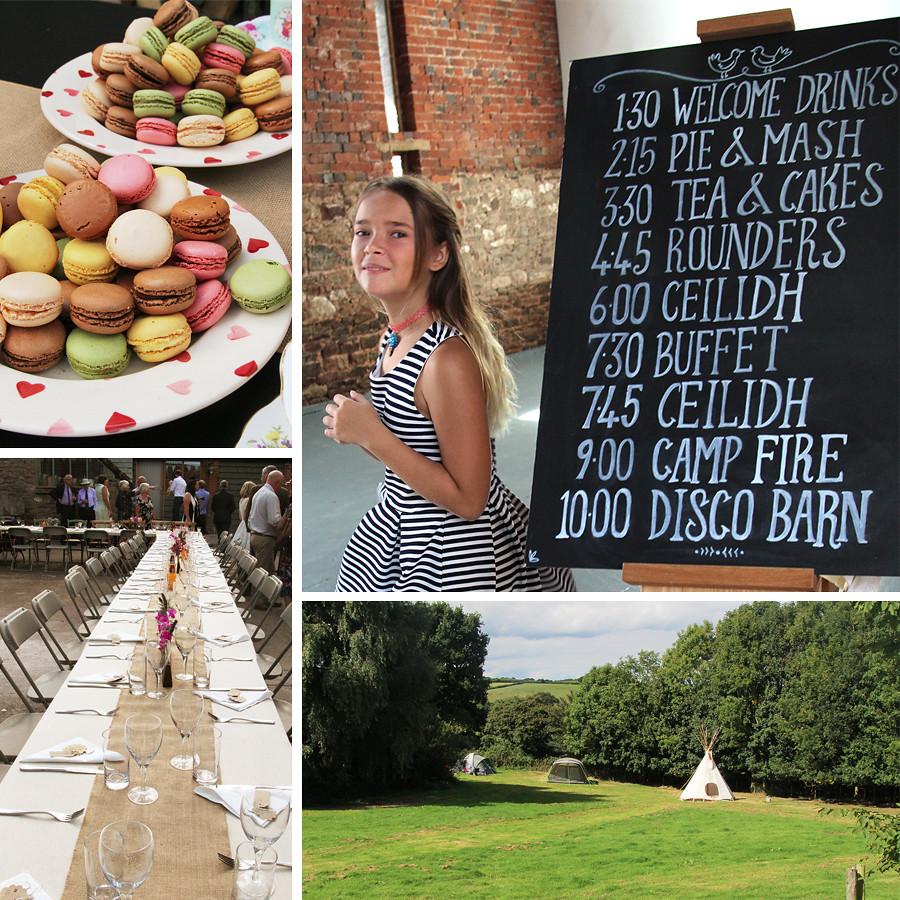 Food was a huge part of the wedding but the activities were even more so! They fed us like crazy and in between eating we danced!  They had a schedule that included “ceilidh” which is traditional Scottish and Irish folk dancing. 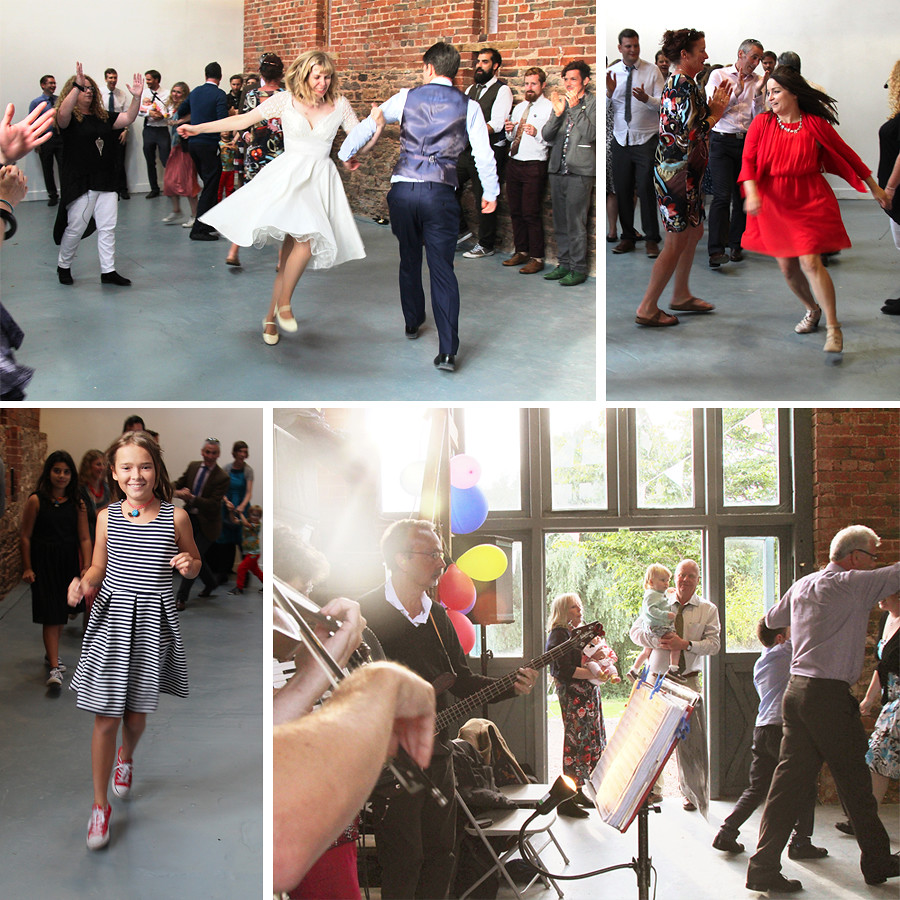 Everyone learned how to dance even those more resistant than others. Payam and I danced, the girls danced! It was very lively. 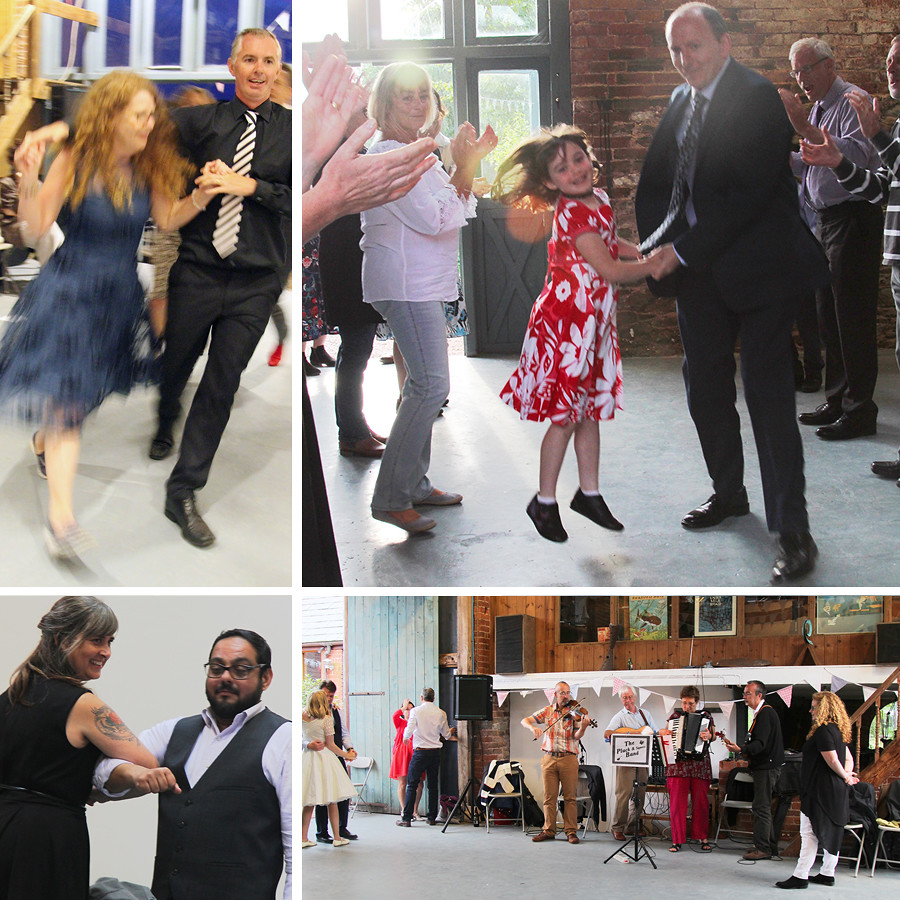 There were even dances where girls got swung around and carried across the floor. We loved every minute of it. Newport Harbor Cruise Wedding, you are looking sadder than ever. 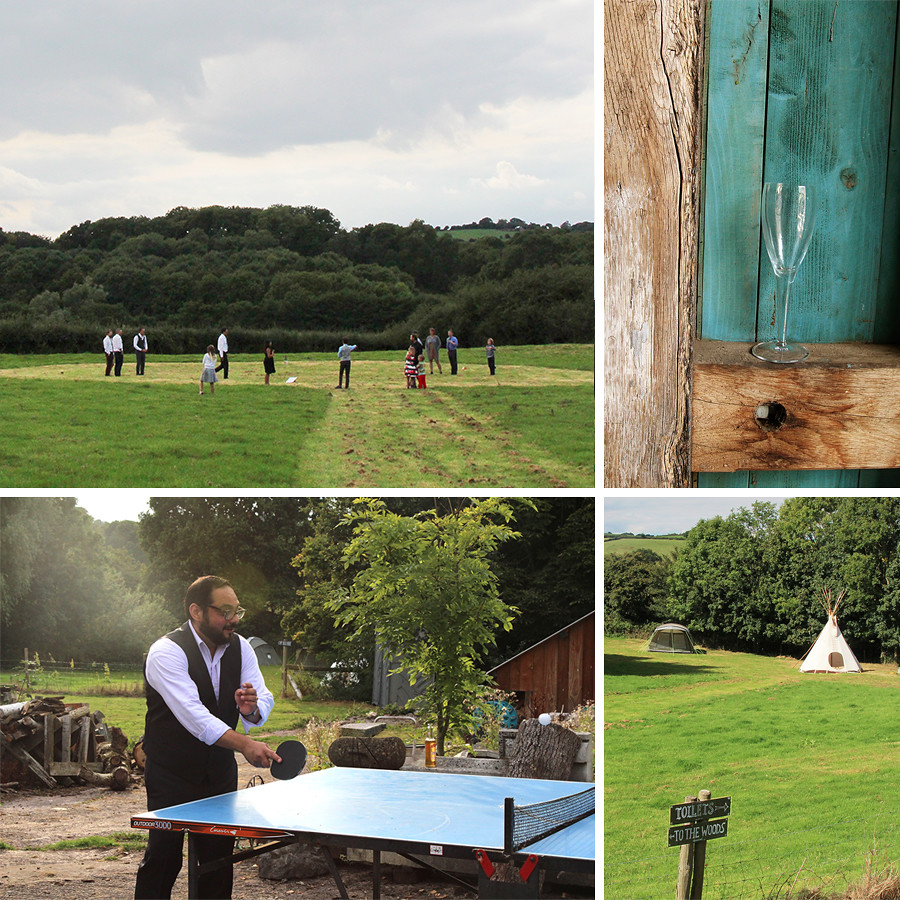 Did I mention they played “rounders” which is sort of like baseball but with a lot less rules and way less boredom? There was ping pong and a woods to play in…and some people even camped near by! 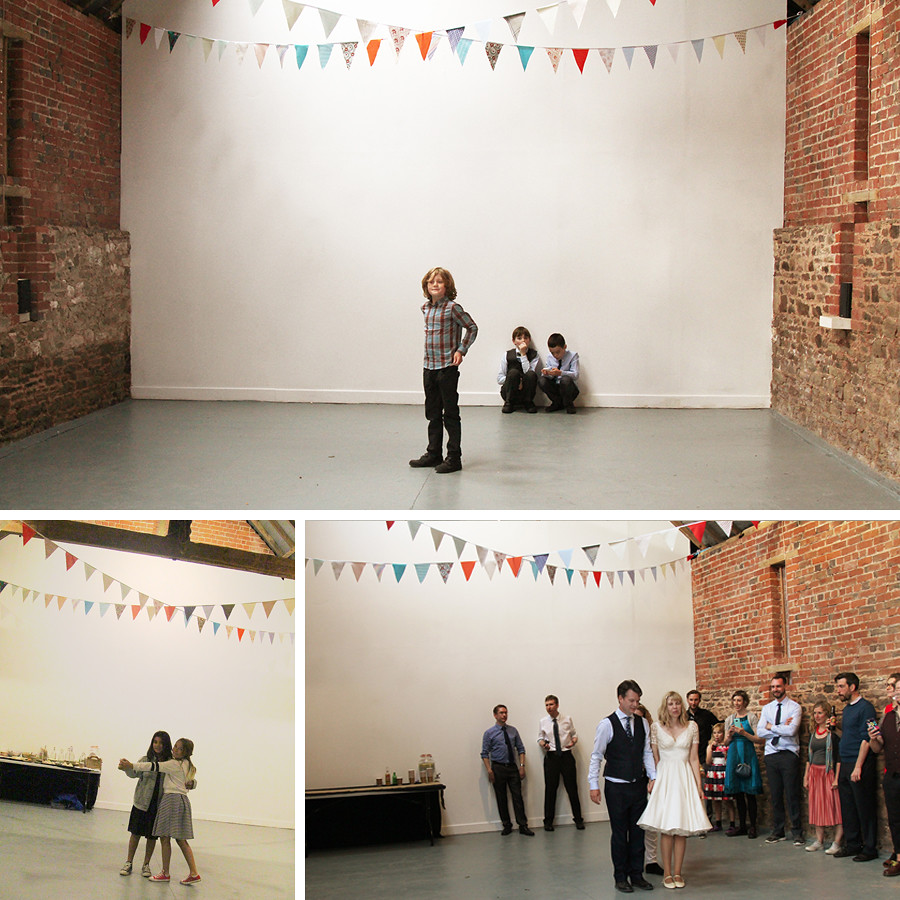 And this barn! You know how I always complain about not having a white wall in my house to shoot my photos against? I’ve decided that now I need a barn. 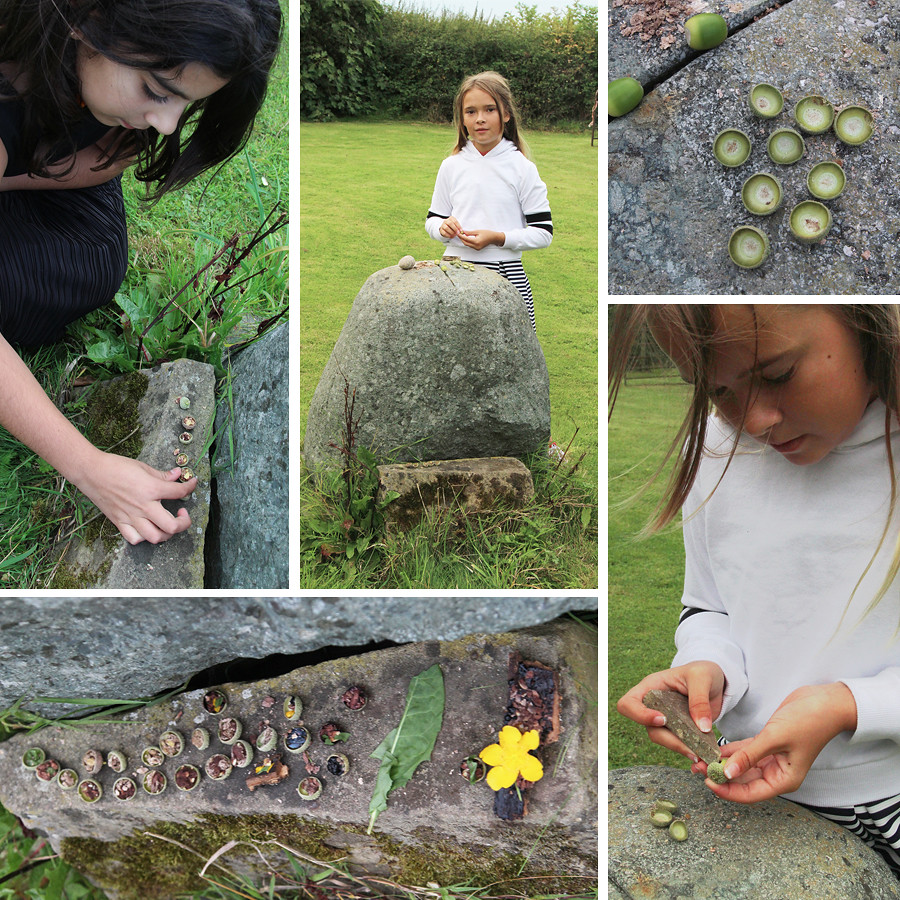 The girls spent a lot of time playing with acorns and making some kind of fairy restaurant. Bug promises to write a guest post about it later so I’ll save that for her. 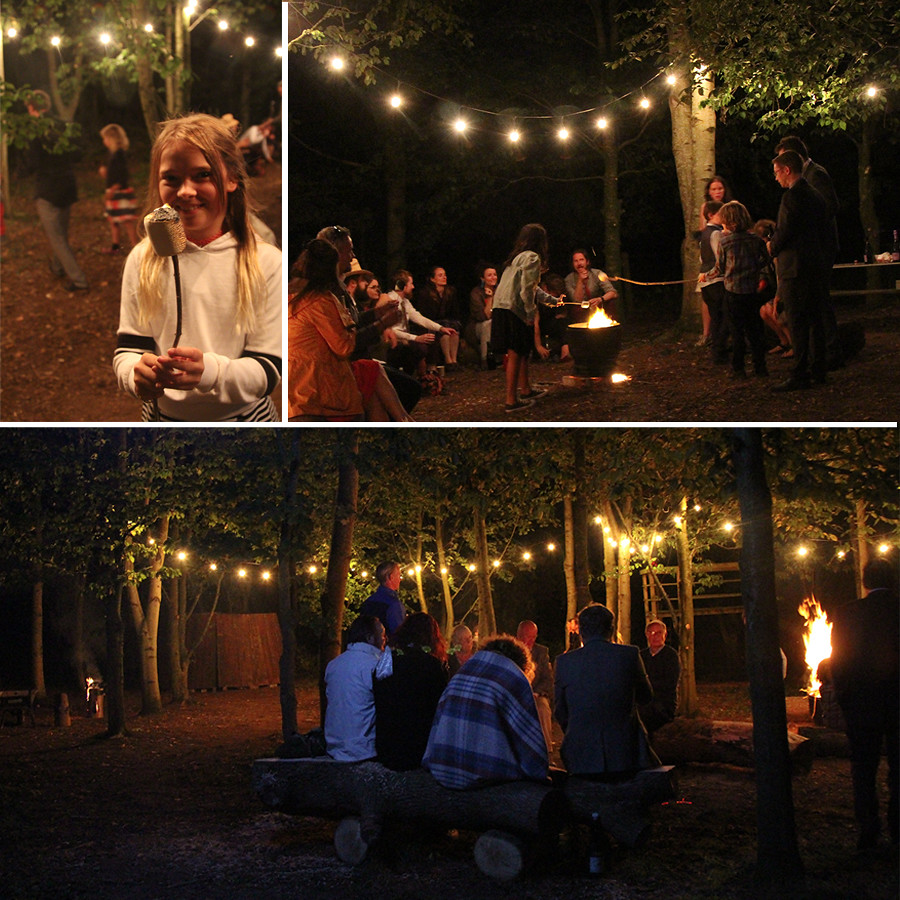 And then, as if all the above wasn’t enough, the wedding lasted all the way until dark and we roasted marshmallows in the woods. I’m not even kidding you. 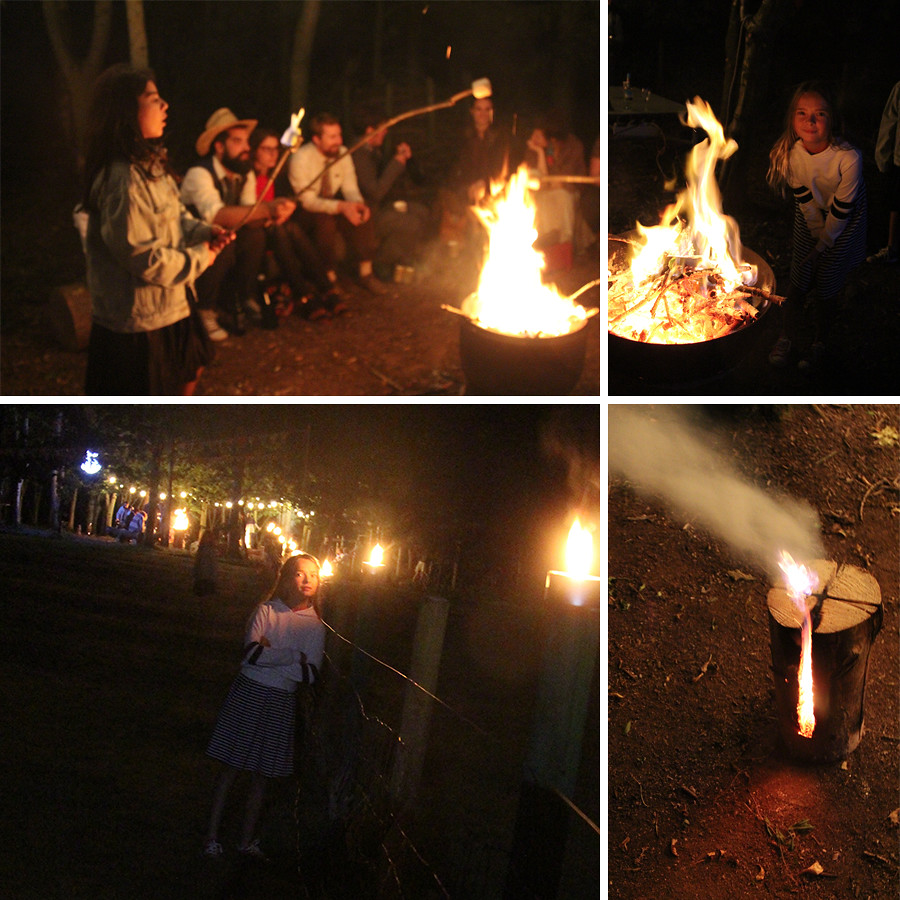 It was a kid’s dream come true. None of us wanted to leave but we had to because the next day we had to get up at 5am to start our mad-hatter trip home. Four airports, two layovers, luggage to be checked and re-checked, customs… you know the drill. So we skipped the moonlight disco dancing, sadly. But you just can’t do it all! 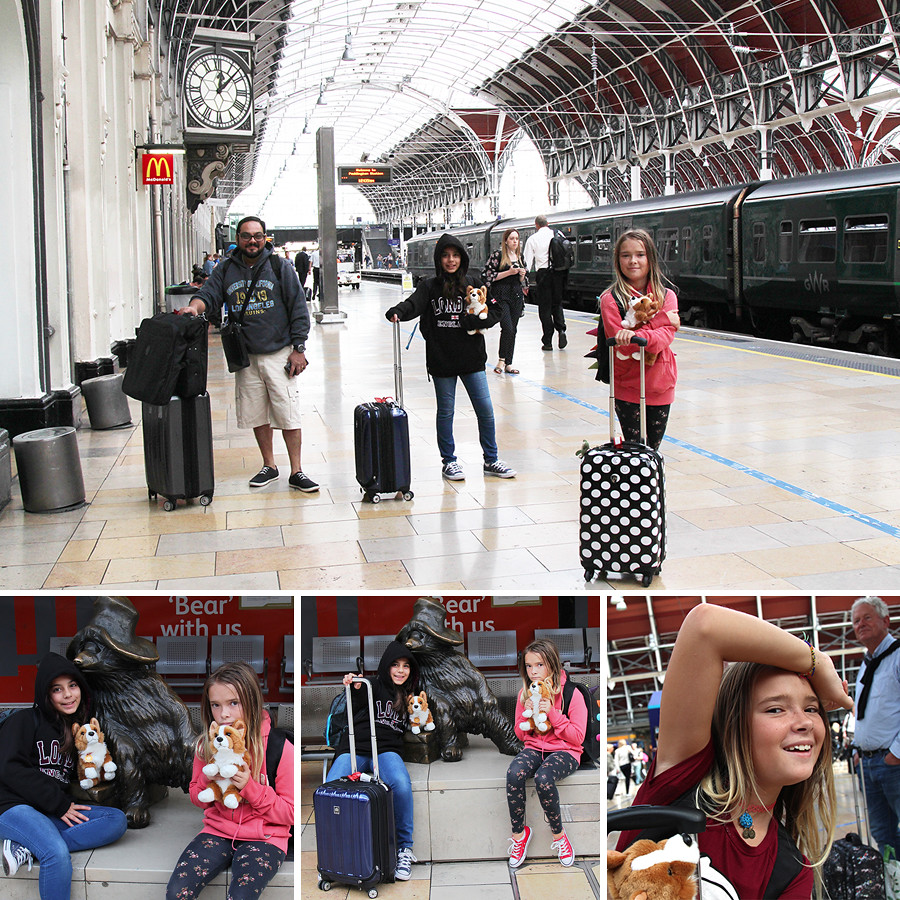 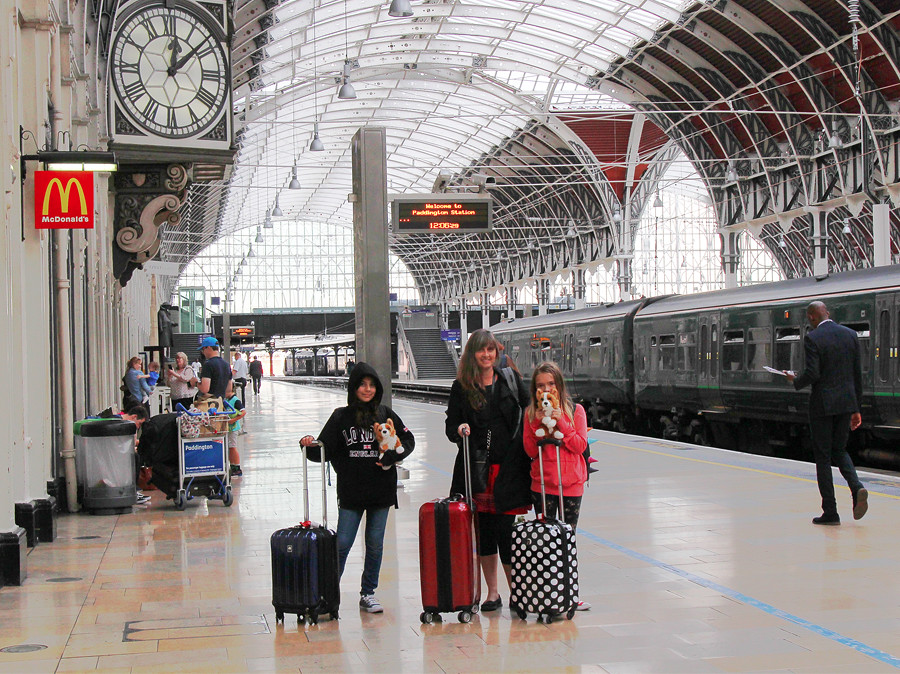 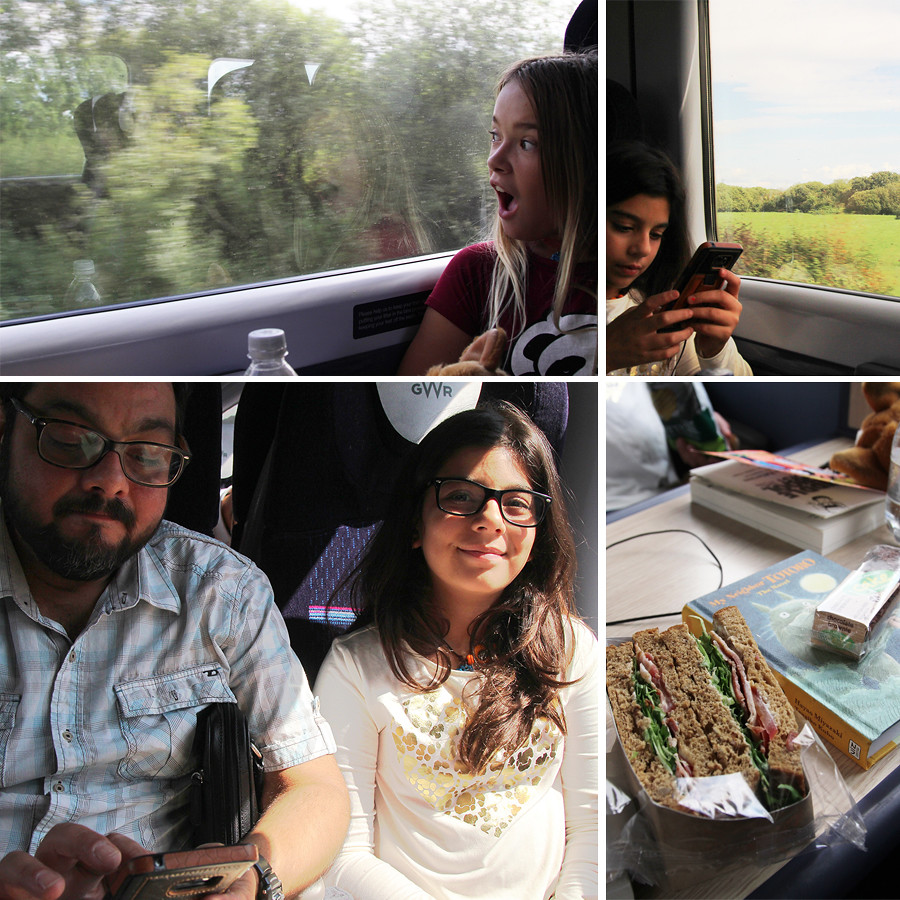 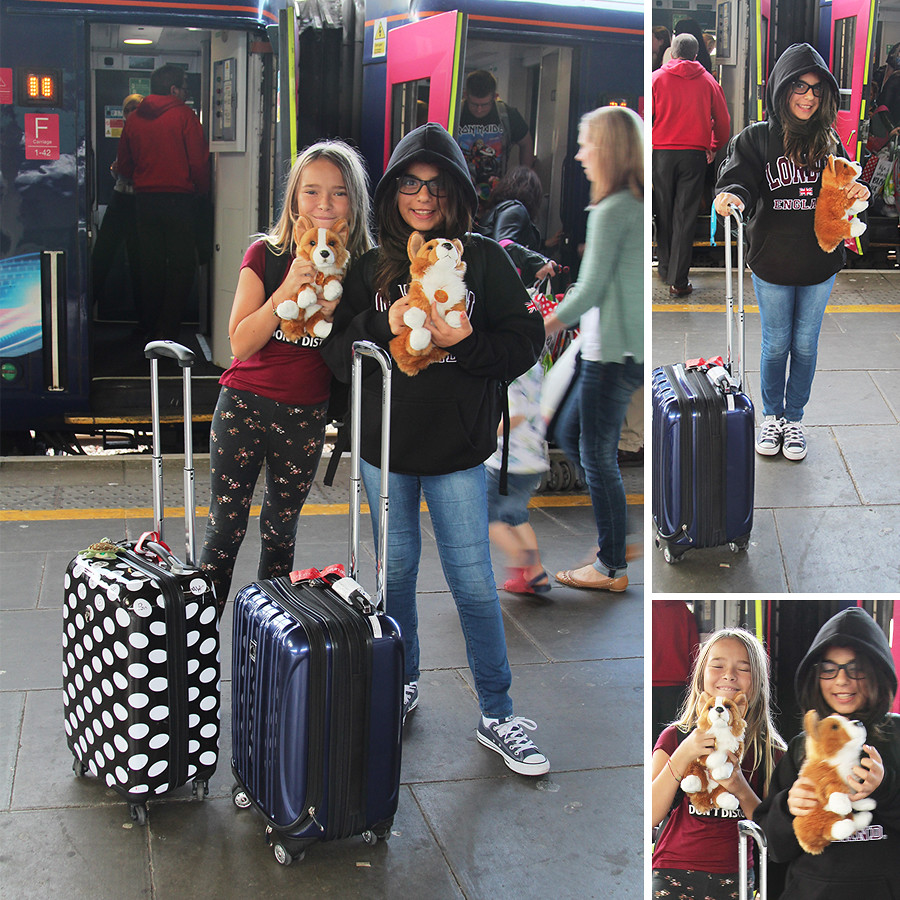 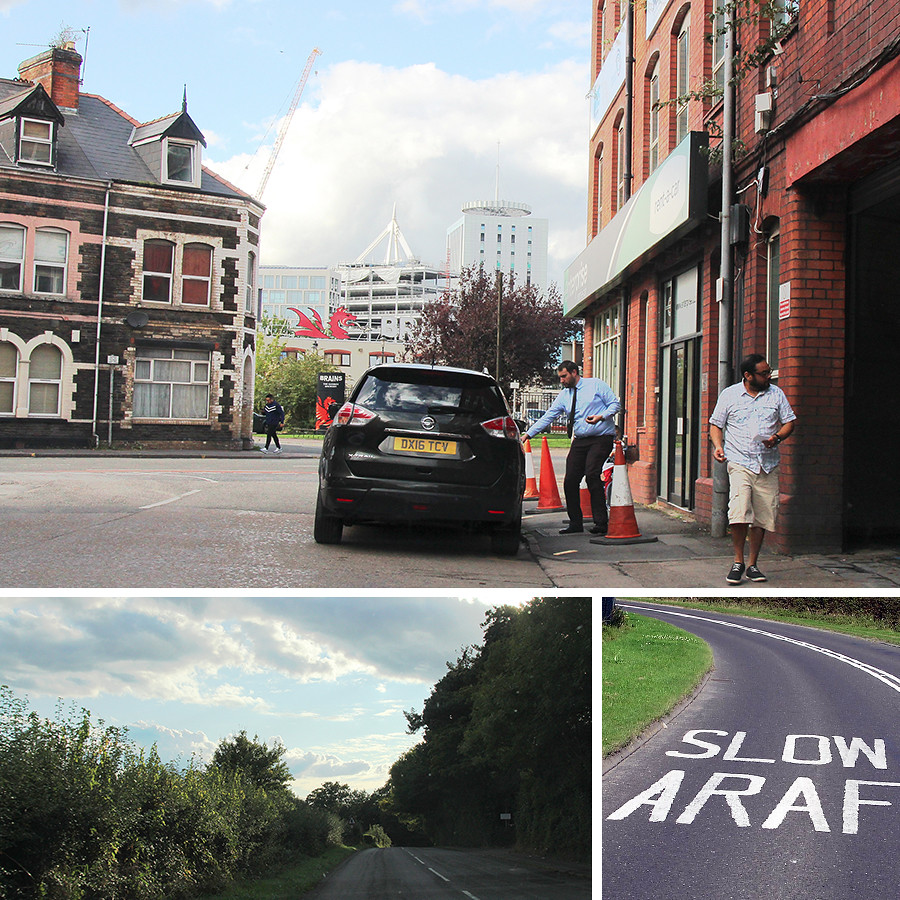 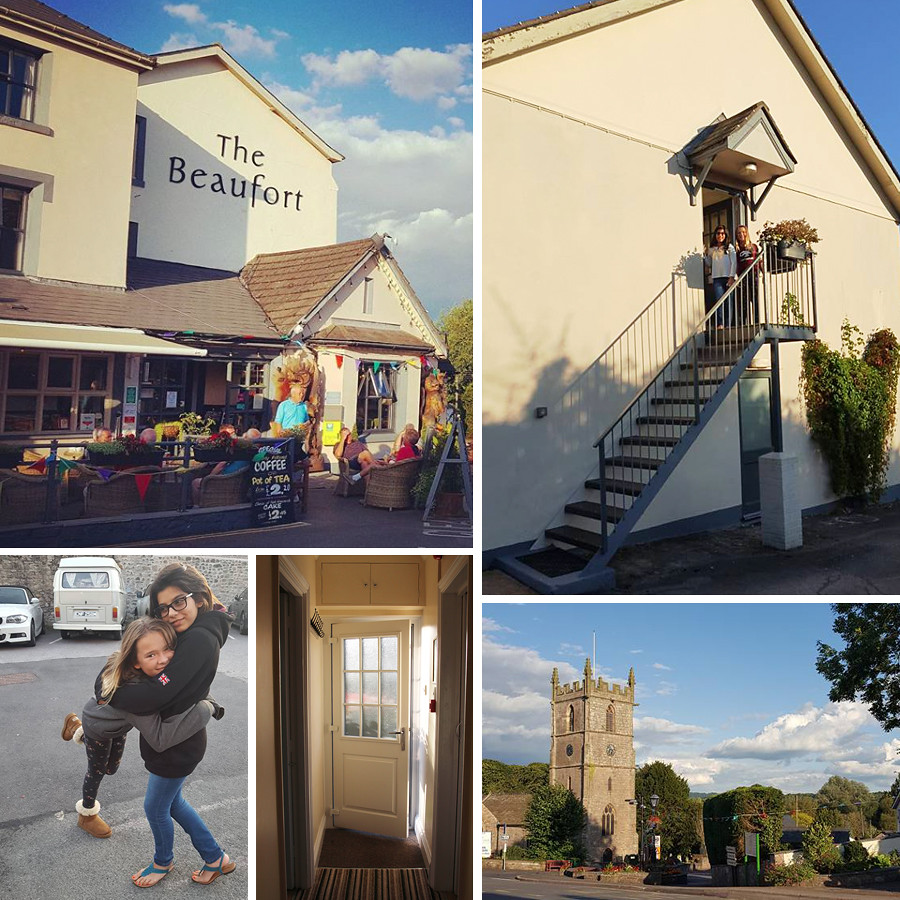 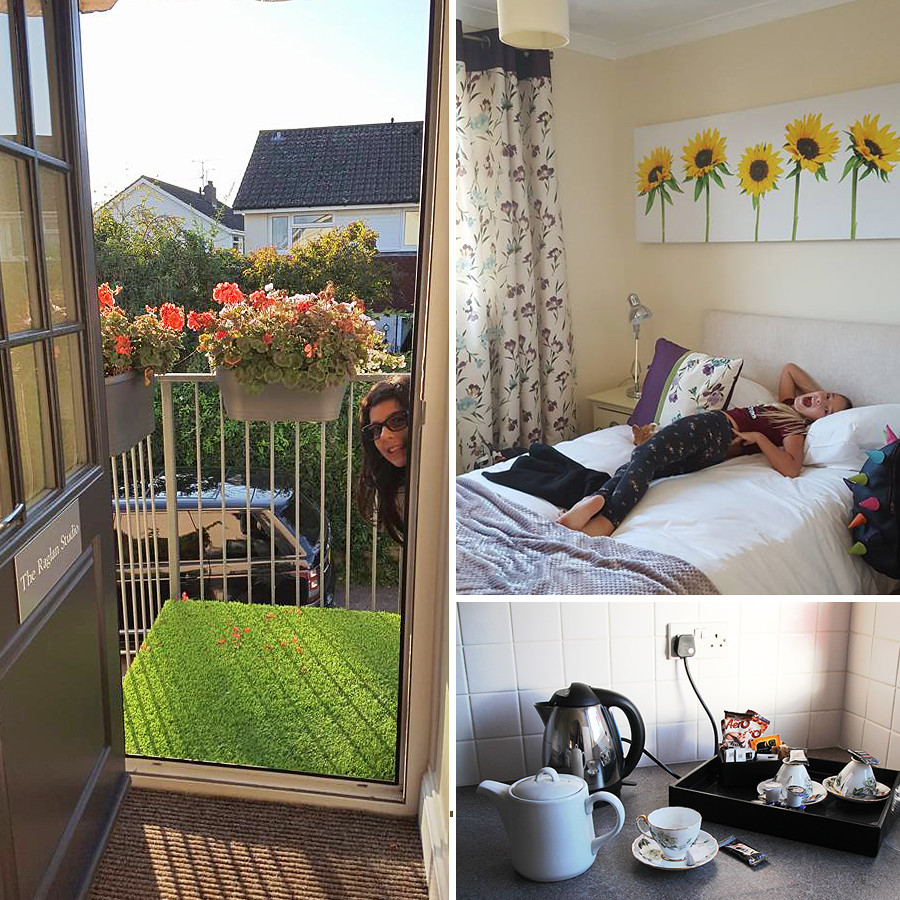 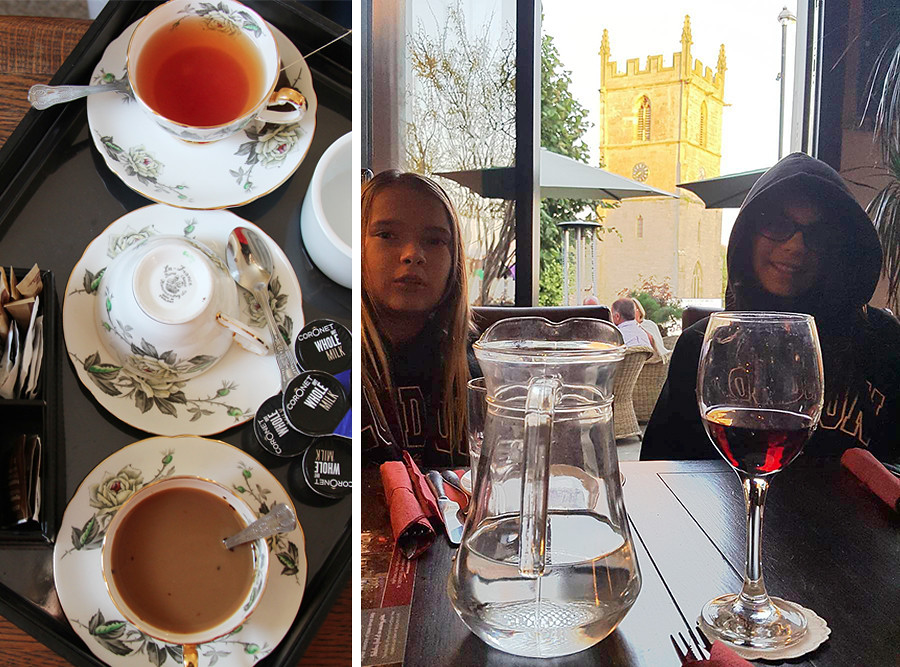