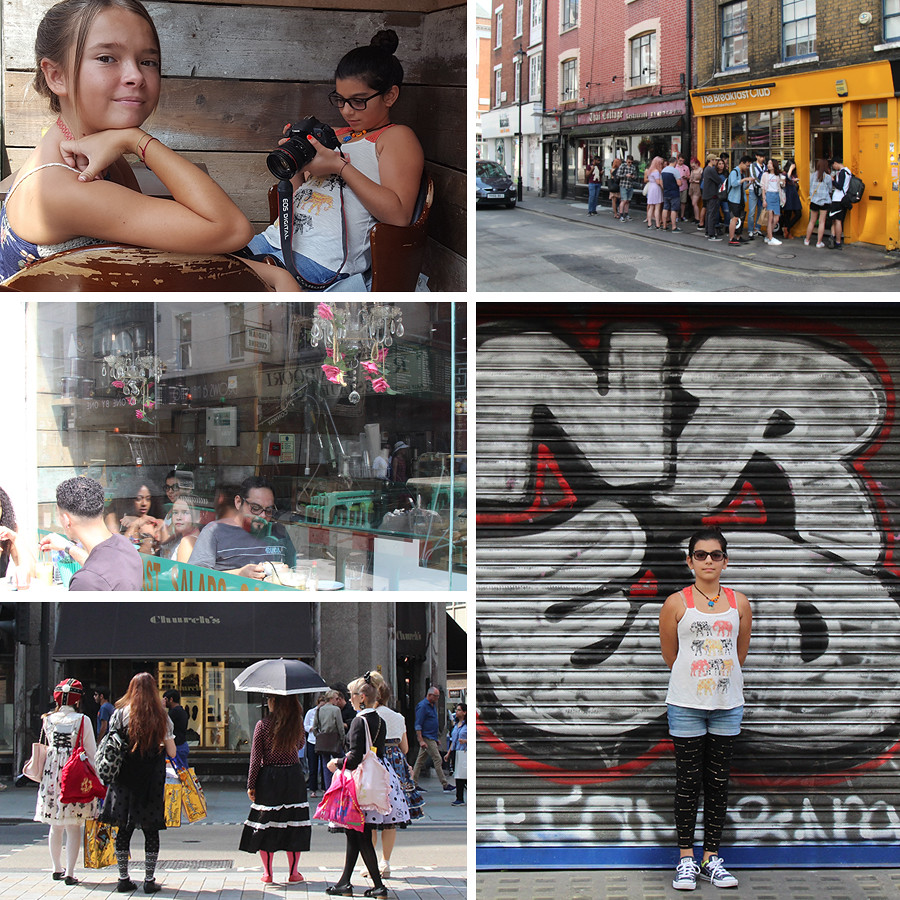 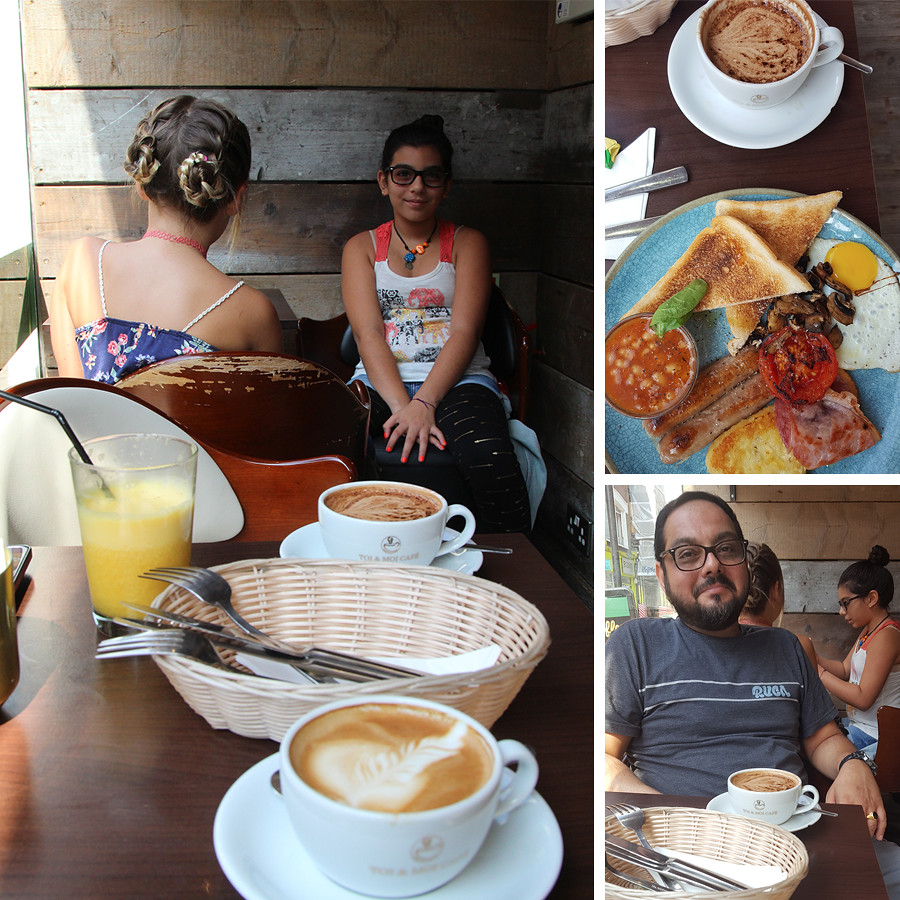 Bah! You know how that goes. You wake up late,  yelp a good restaurant, realize it has a two hour wait queuing up down the street and you end up going somewhere else. That somewhere else turned out to be this little cafe called Moi & Toi that was perfectly lovely! They also spoke Farsi which made the Persian side of the family feel right at home. (Bug and I are picking up bits and pieces of Farsi here and there so one of these days we are going to answer someone in Farsi and trip them out because we are the most gringo-looking gringos there ever were.) 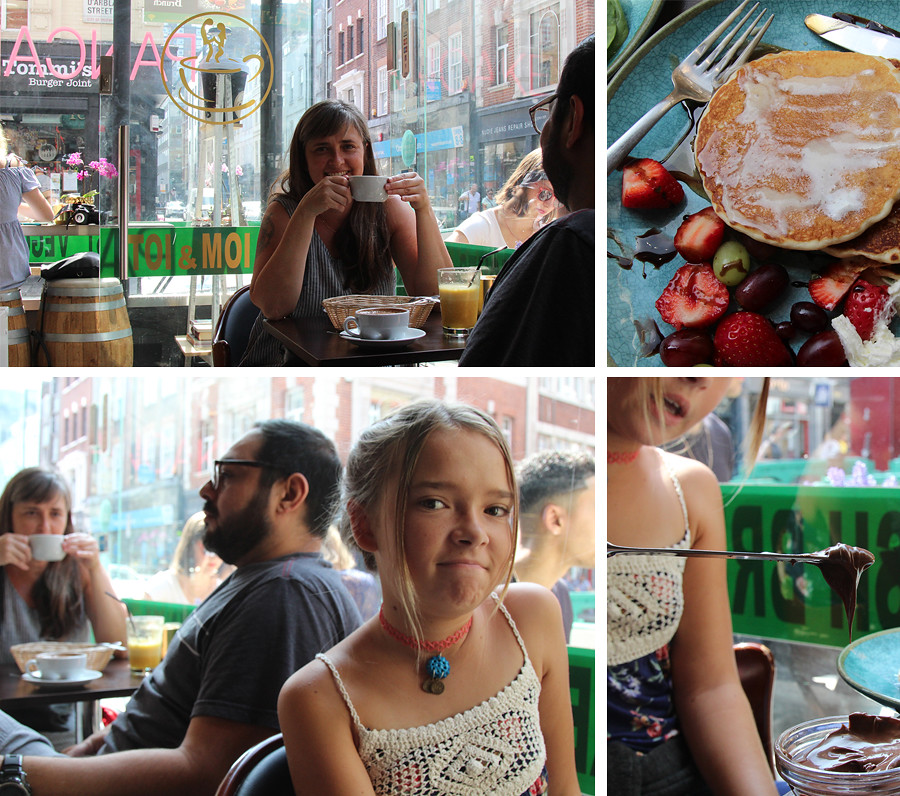 The food was delicious! Unfortunately Payam was not feeling well so I had to eat his avocado “toasty” for him. Which might explain why I am looking fatter and fatter in every picture that Joon takes. Honestly, I am thankful that Joon is taking pictures though because I am never in pictures these days anymore. I miss my old thirty-something self who took good pictures of herself. Le sigh. 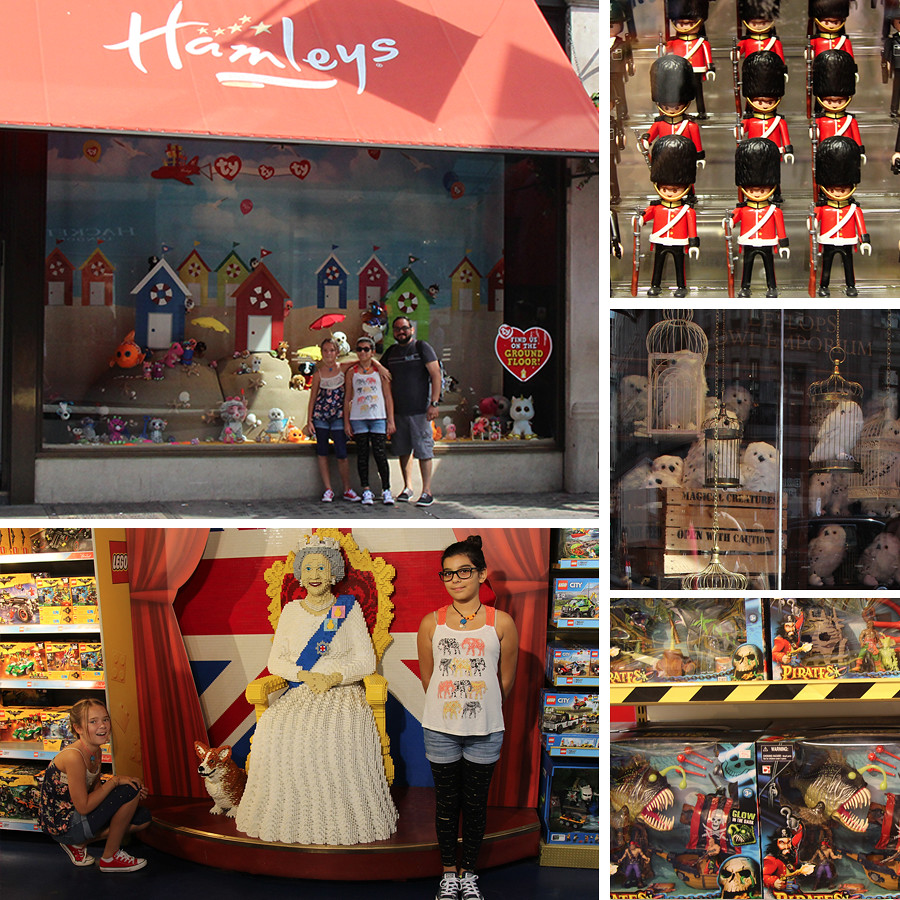 After breakfast we stumbled into Hamleys by mistake! We didn’t even know we were in the neighborhood until we started seeing people walking around with bags of toys under their arms. I had heard about Hamleys from you lovely people and we were so happy to just happen upon it! Four stories of toys! Of course we are all too cool for baby toys anymore but that didn’t stop us from wandering around all bug-eyed with wonder as store employees called out to us to come see the latest thing, carnival style. It really was like a carnival.

So of course we left with some sweets and some plastic moldable bubble fascination in a tube and some flying saucer toy that we could have sworn flew by magic. We were sorely disappointed when we got back to our apartment,  opened the box and found out it was merely flown by a piece of string tucked behind your ear with putty. I guess that says a lot about the magical powers of Hamleys employees. They fooled us good. 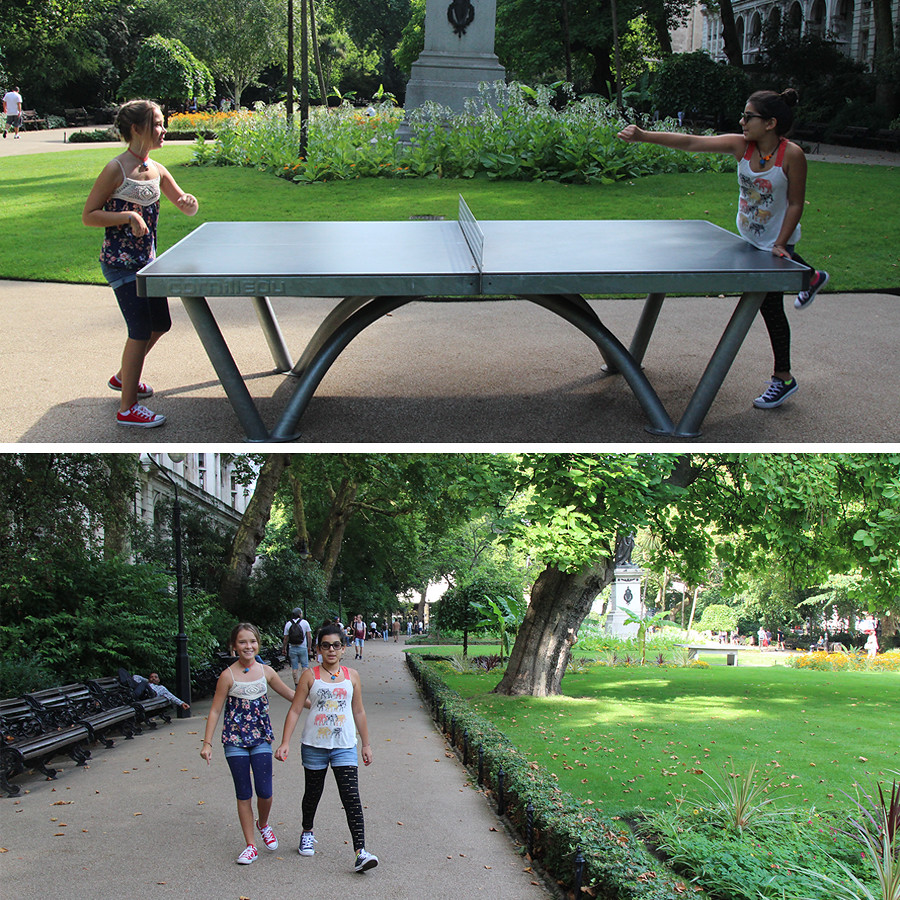 After Hamleys, Payam needed some rest to settle his stomach so the girls and I went exploring in a nearby park while he took a nap at the apartment. It was very warm and humid but not unpleasant. 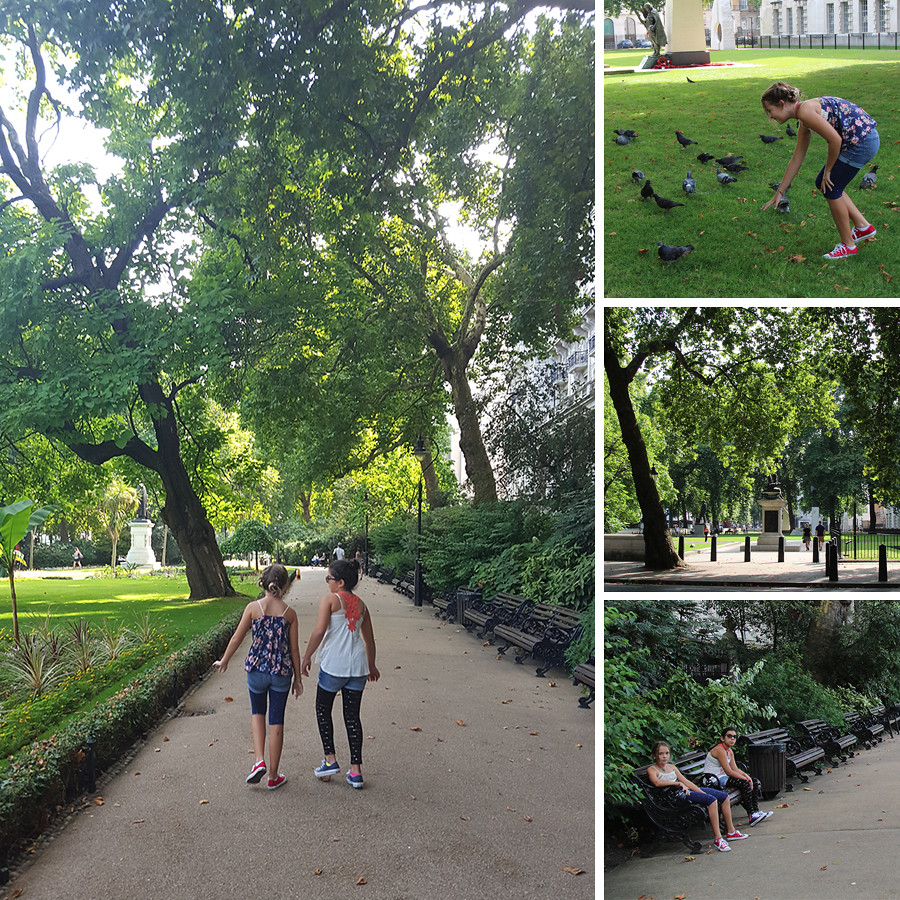 It wasn’t part of my plan to stick around our apartment neighborhood. In fact, I was a little sad to be stuck in this very touristy area BUT I do like that it’s starting to feel very familiar. We are always going to remember the little park and the route we take along the River Thames to the London Eye and then back over the bridge again. It’s starting to feel like our hood. 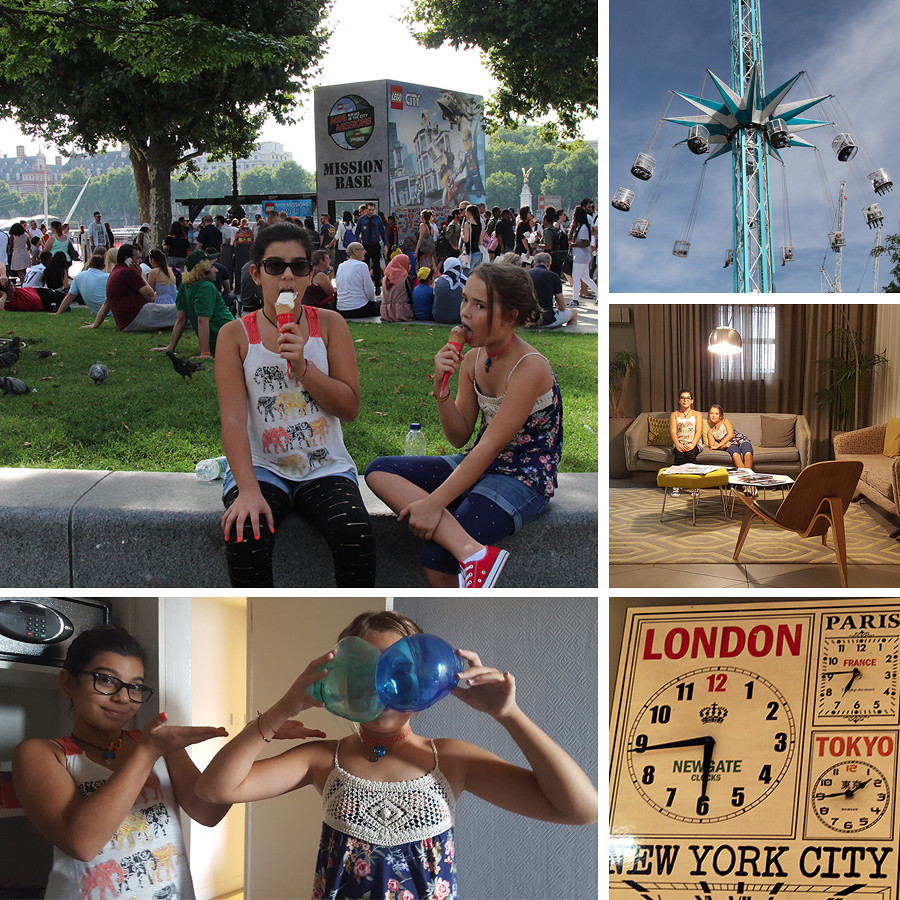 Of course the kids love downtime and actually so do I. We are far from bored, that’s for sure! A little ice cream, some fun with bubbles… 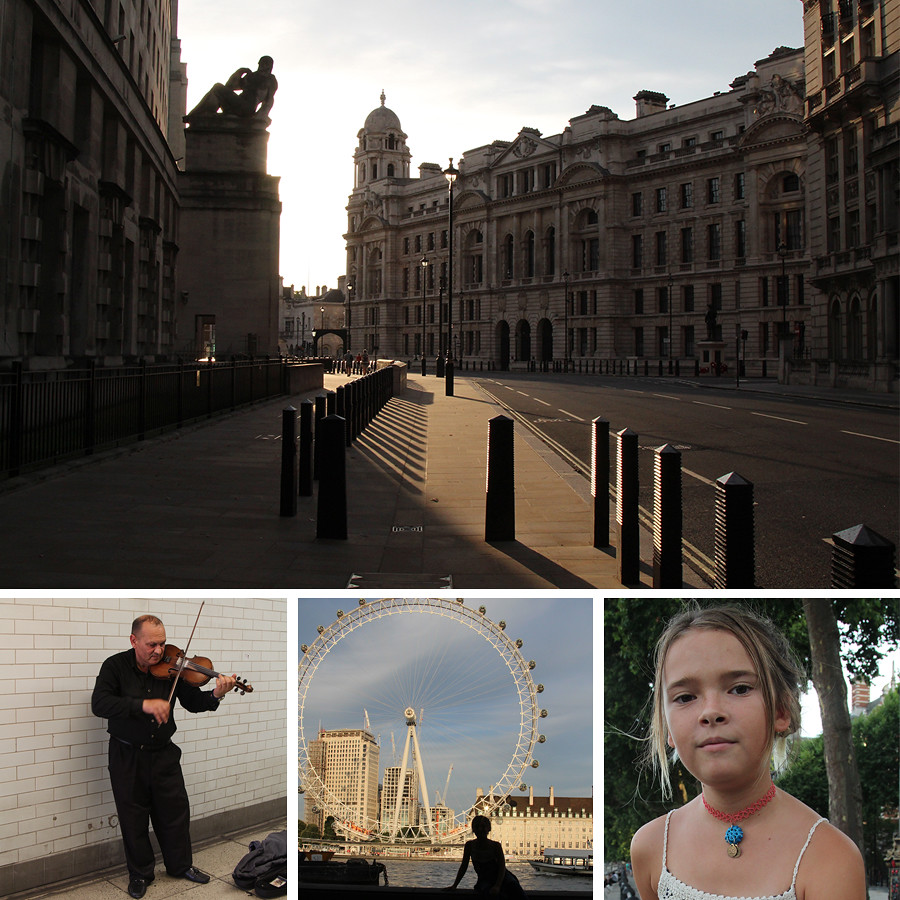 After a few hours Payam felt much better so we took him out on the same walk to show him all the things we discovered. This time we walked to The London Eye AGAIN because we had 7:30 reservations to actually ride up in it! 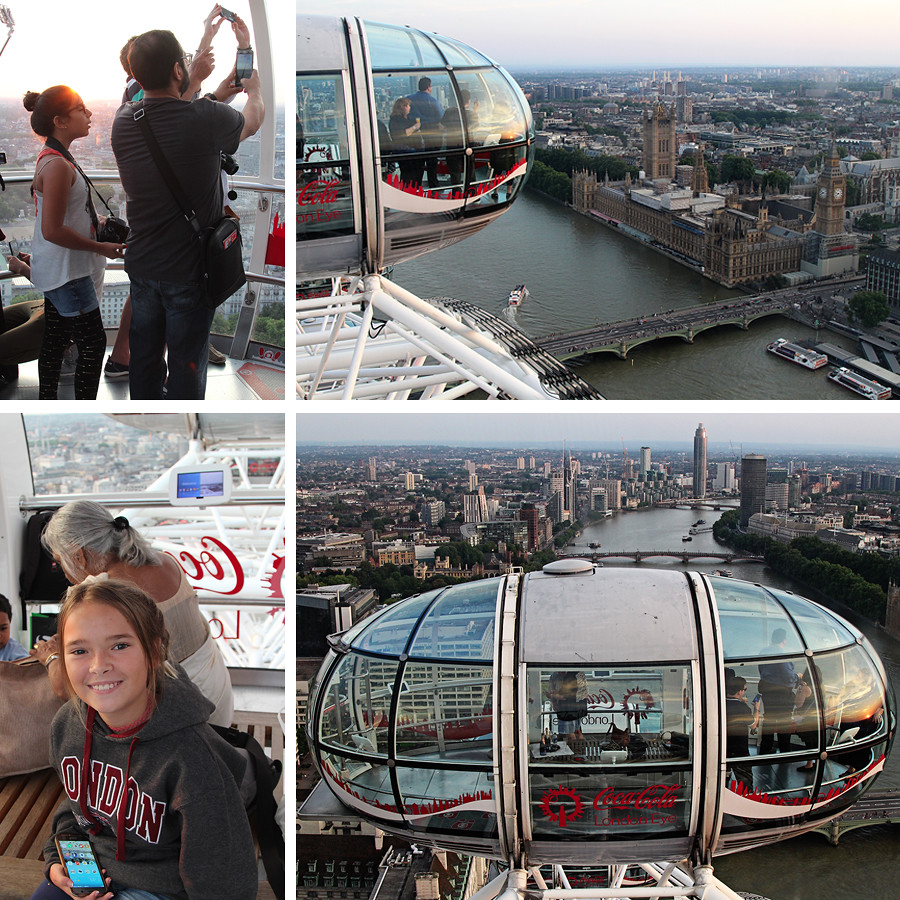 We were not disappointed. It was really, really cool. Bug kept saying she didn’t want to go on  it because she is afraid of heights but she is full of baloney because she loved the entire thirty-minute ride. Does that look like a smile of someone who is scared of falling through a thick bubble of glass to their death below in a muddy river? No. She loved it. 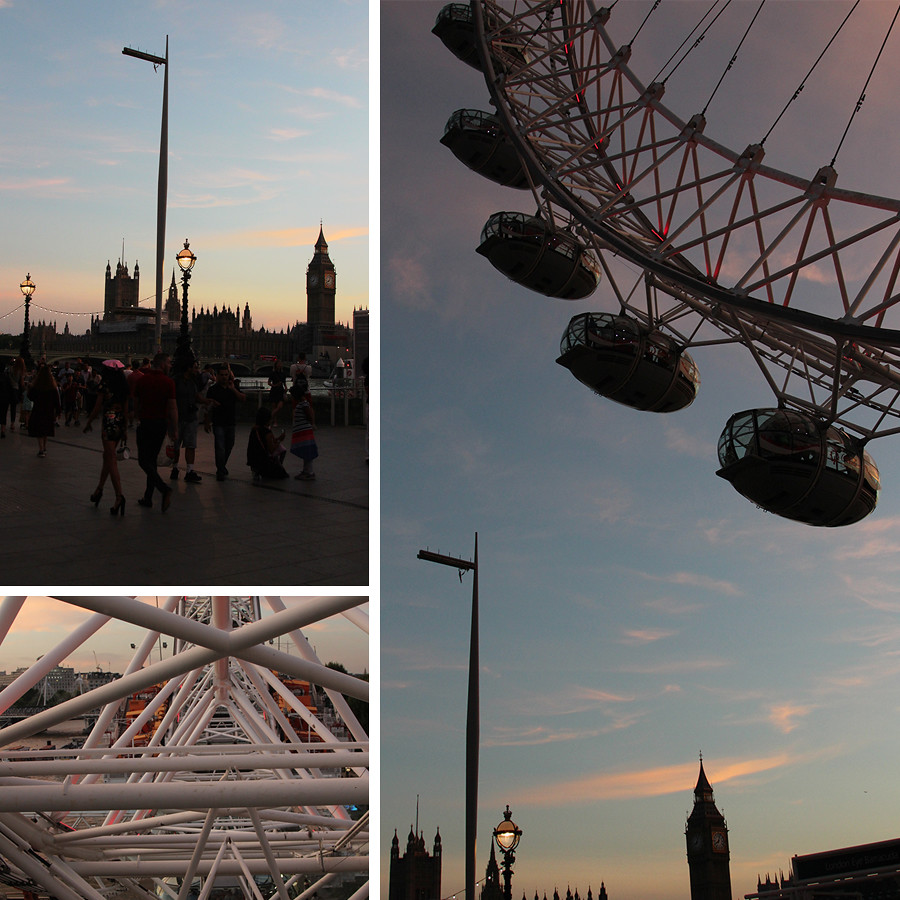 By the time we were back down on the ground it was sunset and we were ready to find the best Persian restaurant in London. We’ve heard stories from Payam’s family members so we were on a mission. 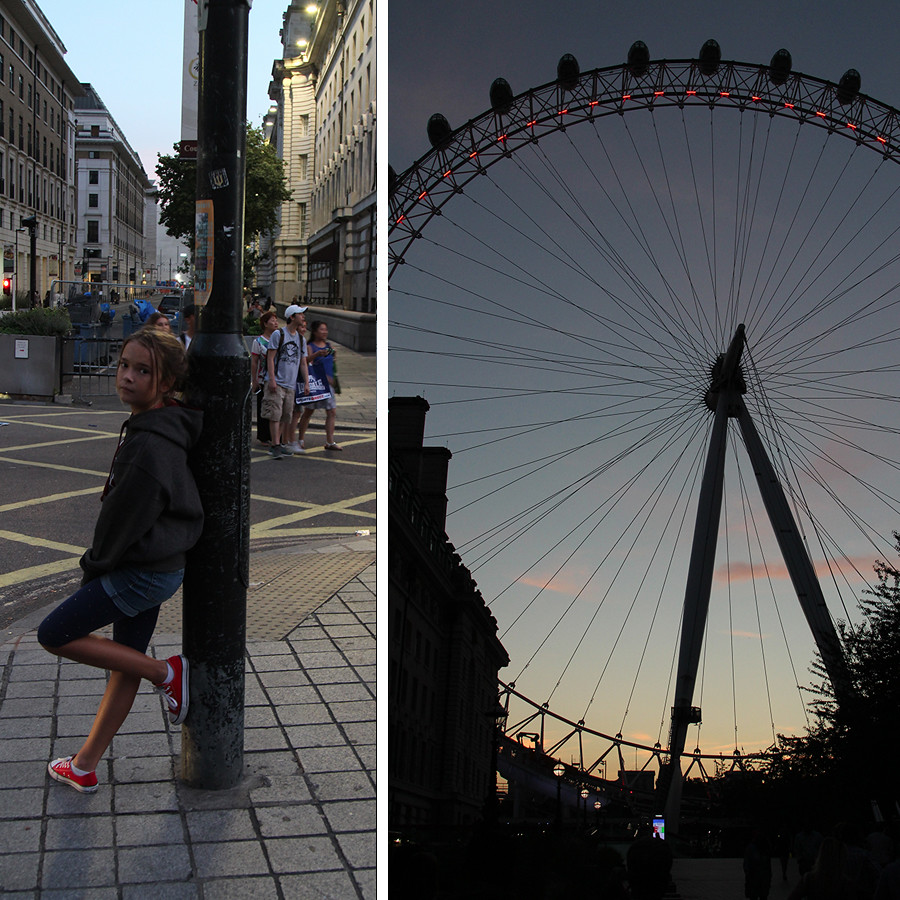 A mission that was severely hindered by lack of wifi and roaming phone service. It is very hard to call an uber when your phone refuses to acknowledge you exist. We’ve have a lot of time to relax in the streets while we wait. 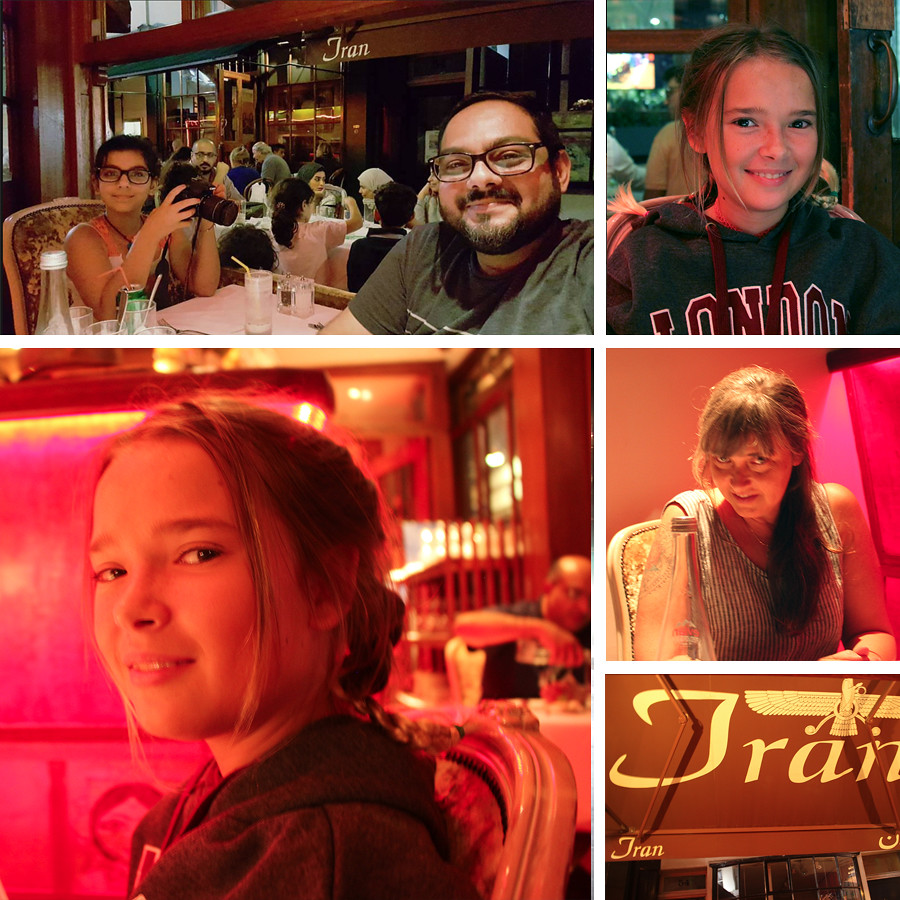 We finally made it  to Iran Restaurant. I’m not sure it was the BEST Persian food I’ve ever had but I did enjoy my fesenjoon immensely. It’s so good! Their yogurt tasted like a dirty sink so I’m not sure what’s up with that but we survived. Maybe it’s an acquired taste. I think the water tastes different here and that has an effect on a lot of things. 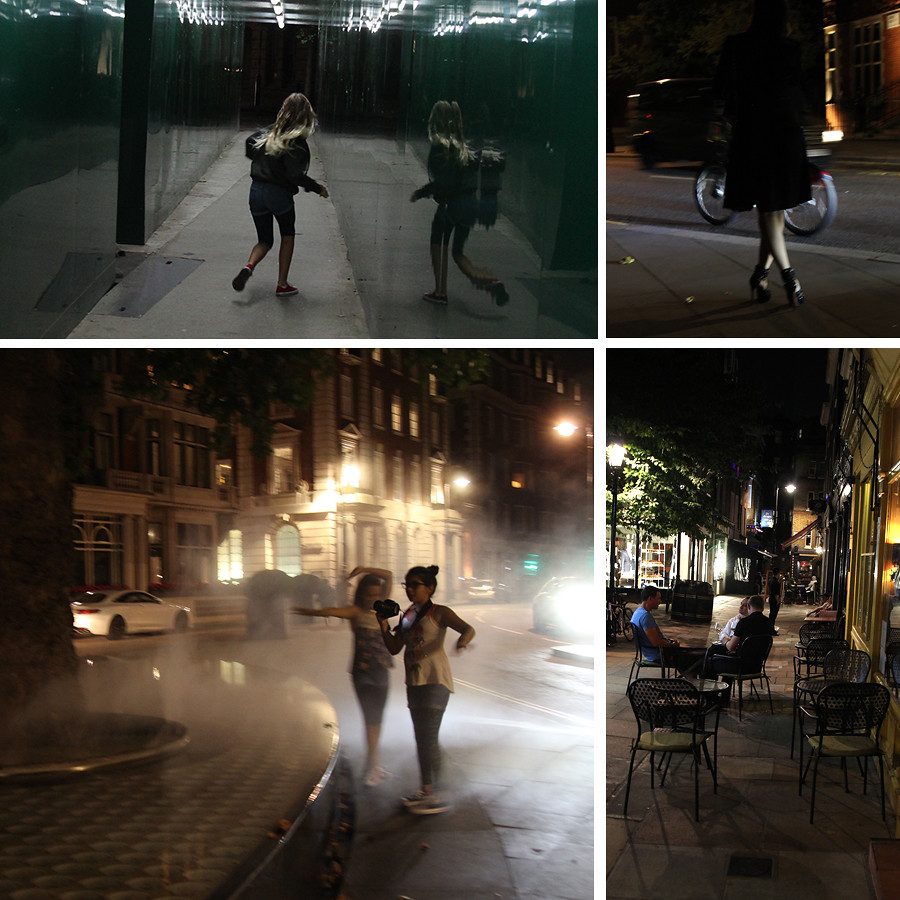 Then back to the streets in search of wifi to call another uber to go home. I actually kind of like these wandering walks. They are great for photography and you know how I feel about photography. 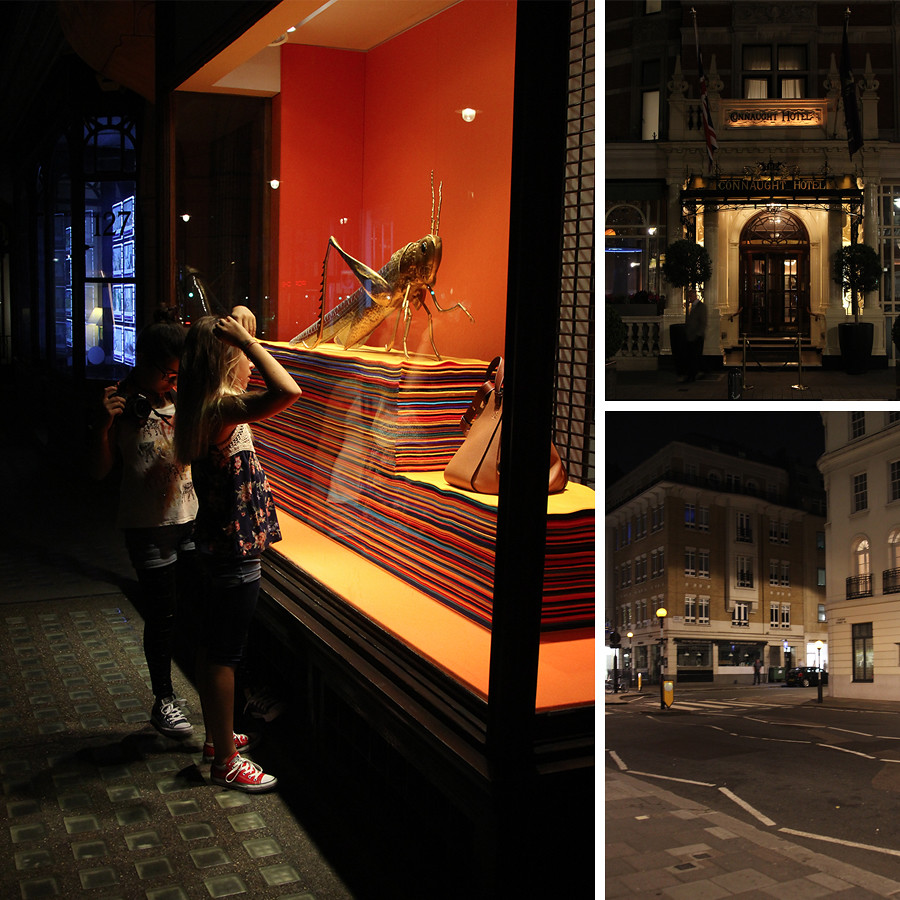 I’m letting Joon borrow my old camera and she is having a blast with it. Who knows, maybe she’ll grow to be a photographer too! I would love that.

Goodnight Day Two in London! Tomorrow we try again with the hop-on-hop-off bus tour. And THEN Harry Potter! Woot! 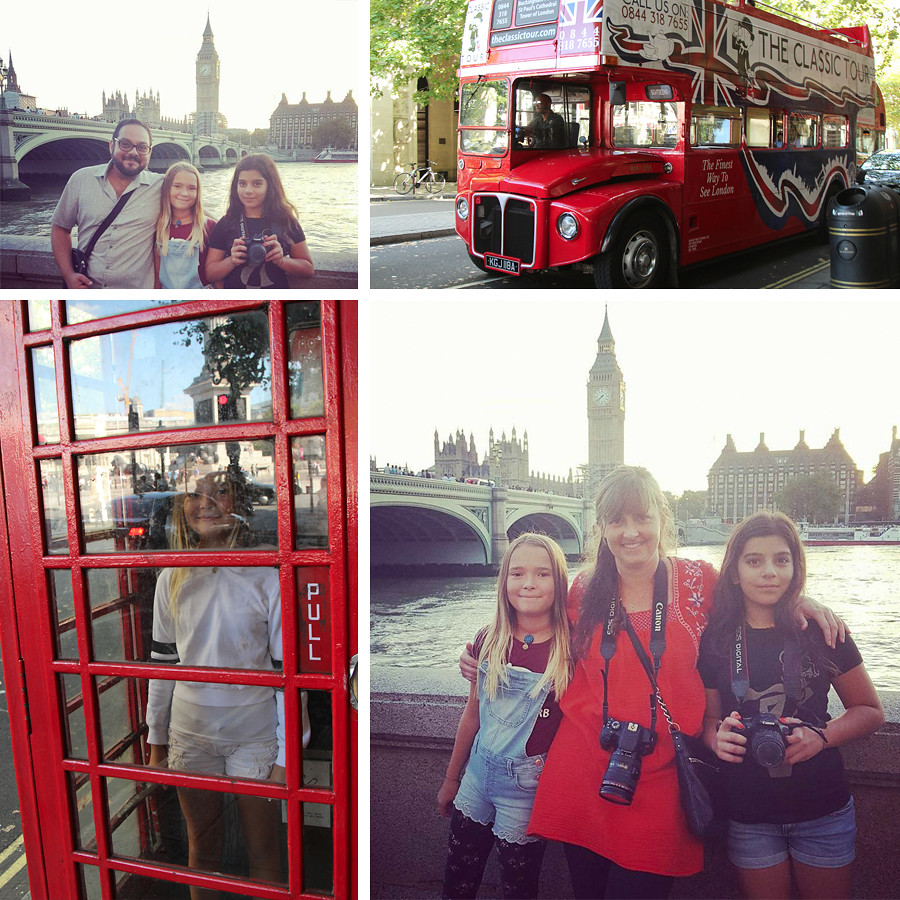 We have arrived in London! We got in about 3:45 pm London time and we were so out of sorts with our schedules all out of whack. My first impression of London was the smell of Tang. In fact it was sort of a theme because the orange juice they served on the plane was definitely powdered and very Tang like.  Poor Joon had an unfortunate accident with the tangy orange juice and ended up wearing it and possibly ruining her stuffed Pusheen. Anyway, after we got through customs and were funneling up and down the many stairways towards our car service, we smelled this very strange orange-scented cleaner. Like Tang! Cheerio! That’s my first impression of London. 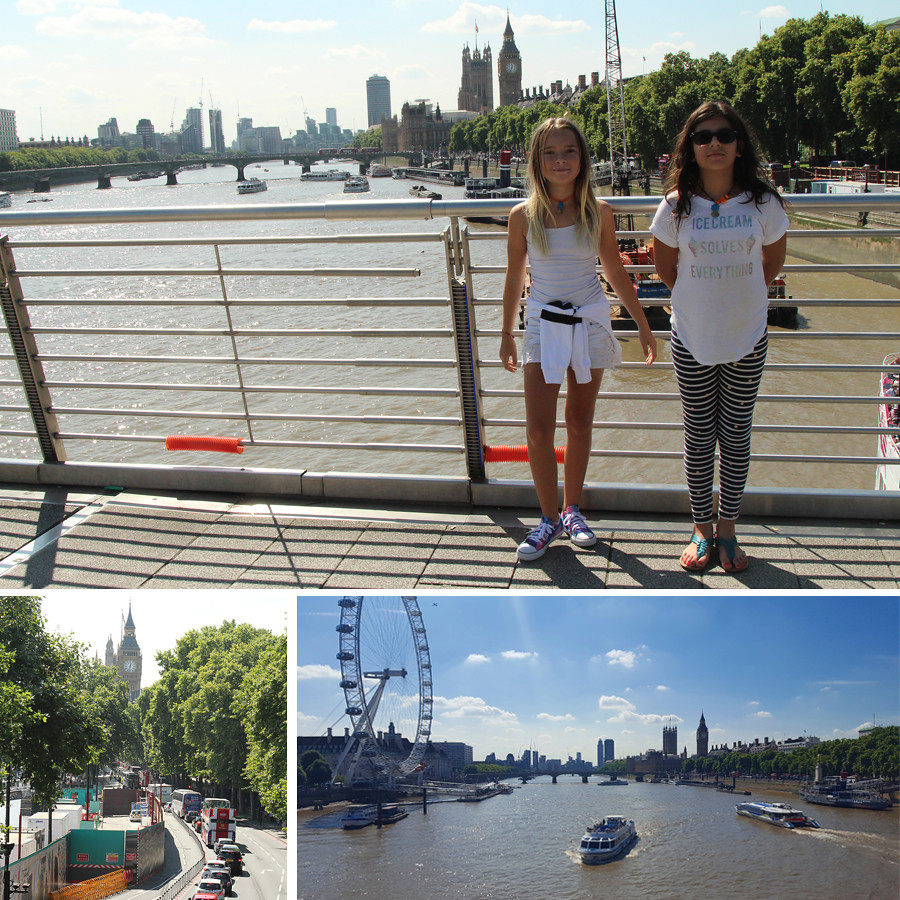 My second impression is that it is very bright! Maybe it’s because we are farther north latitudinally than Southern California and the sun is closer during the summer or maybe it’s because I’m used to living by the ocean with a marine layer constantly in the air. Or maybe it was just unusually sunny! Very sunny for three in the afternoon. 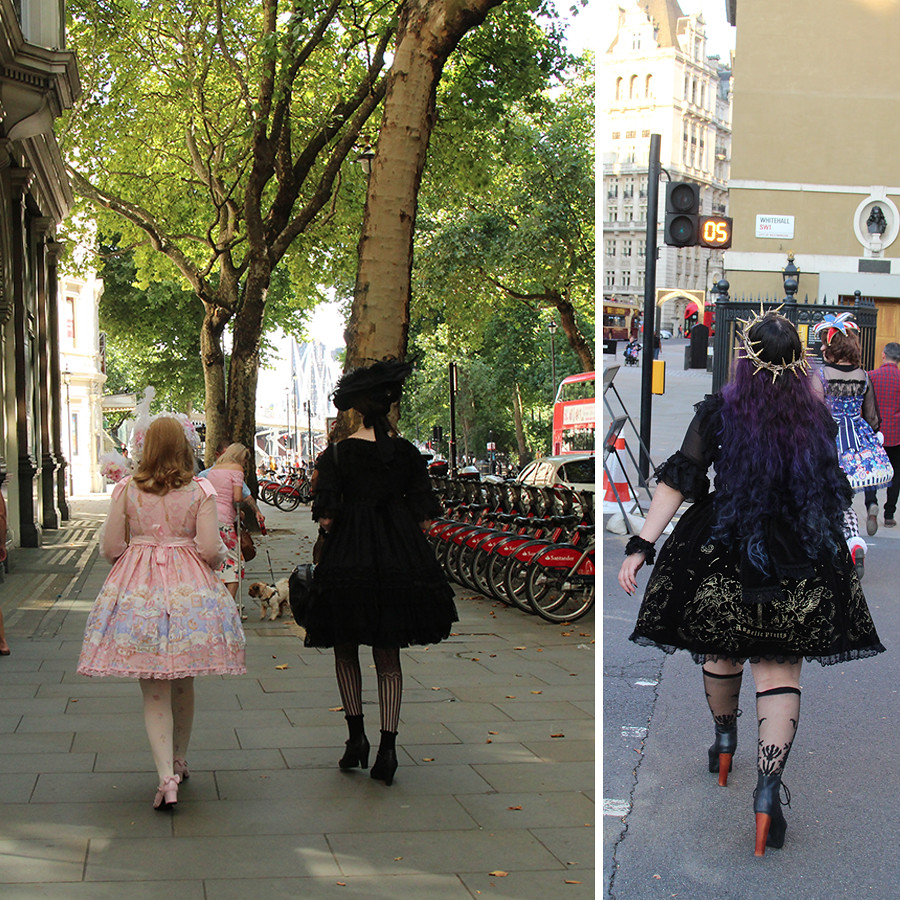 My third impression is: why are there ladies dressed this way? Is there some sort of comi-con-kawaii party going on in the park?  I didn’t have the guts to take a picture face on but if I see more of these ladies I definitely will because they are everywhere. 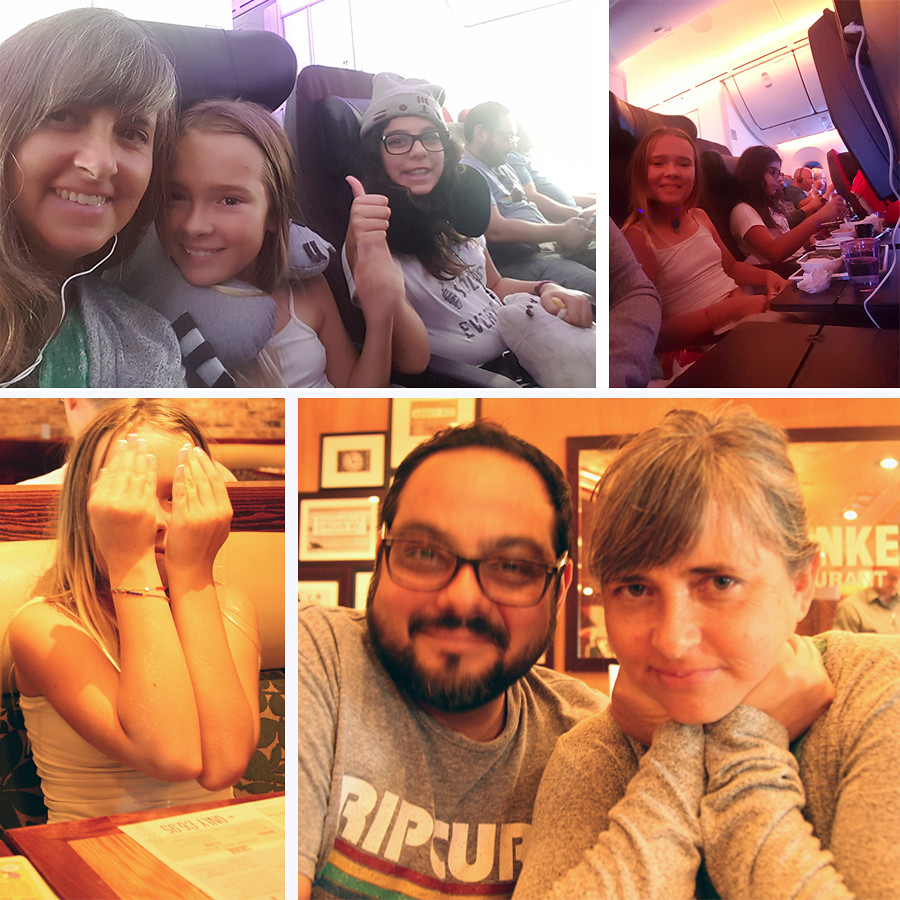 After a quick walk to the River Thames we figured out we were hungry and settled on the worst food chain ever: Garfunkles. I think this is where all tourists go first because we don’t know any better. We later figured out there are a ton of really nice restaurants on the other side of the square so I am not going to say that all food in London is terrible. But Garfunkles is definitely terrible. I think some of the terribleness is a bit sentimental though. Dense mashed potatoes that taste like they’ve been under a heat lamp all day, watery iceberg salad with bits of cabbage, mashed peas that look like guacamole but definitely are NOT. We were such blundering Americans.

By this time we were all getting very grumpy and tired because our internal clocks were clashing with the bright sunshine. We yelped a coffee shop thinking a shot or two of espresso would fix us up. 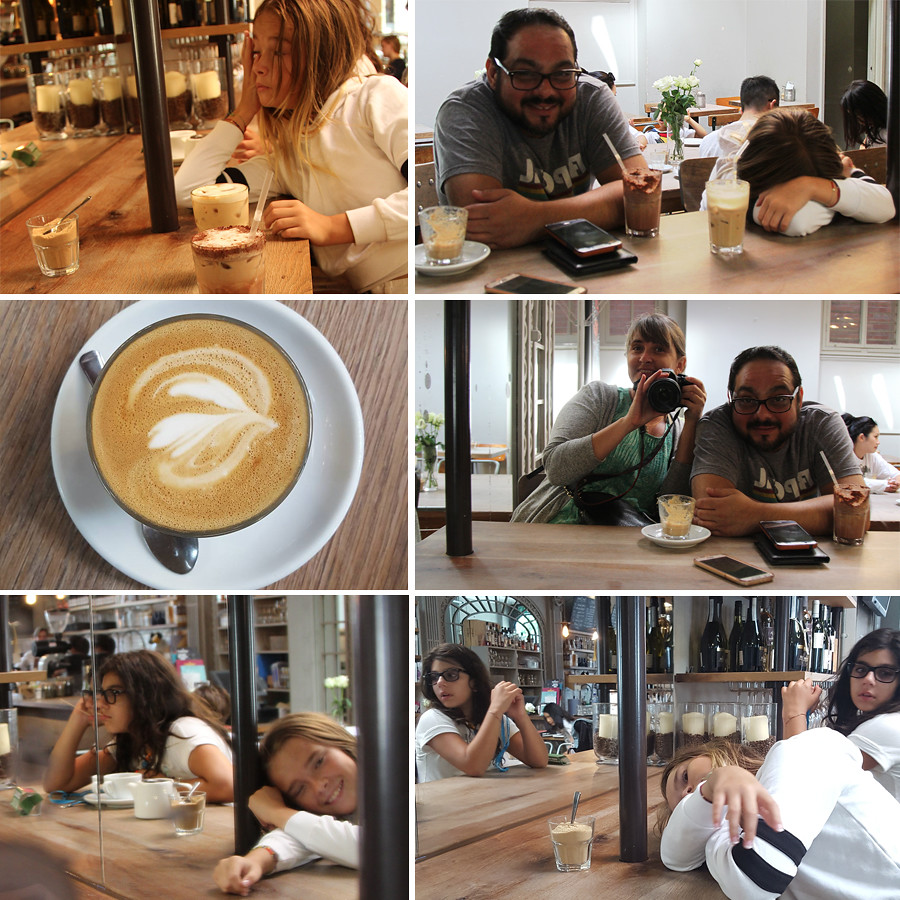 But that didn’t work at all. My plan was to stay up all day and go to bed when the Londoners  do so we could beat jet lag but the kids thought that was a horrible idea. Nothing could keep them up and in the end I had to give in. 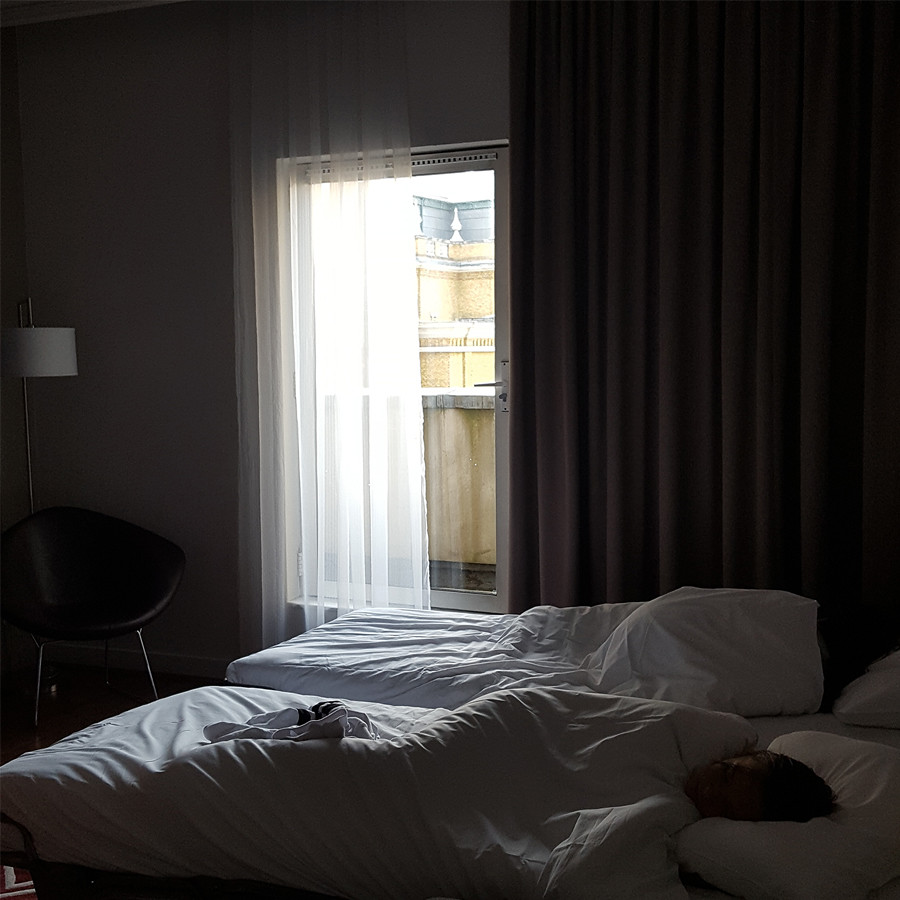 Of course me being being the extreme morning person that I am, I could not sleep at all with the sun shining so bright. My brain completely works off the sun and does not care at all what time it is. So I sat in our apartment and sulked for two hours straight while everyone else slept like the dead. I think possibly jet lag gave me a sour attitude but no desire to sleep which is terribly inconvenient when everyone else is sleeping. How could we be in London, just steps away from so much to explore and all anyone wanted to do was sleep?!! But also, how can you make kids do things when they are tired and grumpy? Sometimes you just have to accept your limits.

Why didn’t I go out and explore London alone you ask? Honestly, I was too afraid and I knew that Payam would be sad to miss the things I would be doing without him. The girls could care less but I know Payam would want to be with me. So I waited and sulked and worked myself up into a really foul mood. 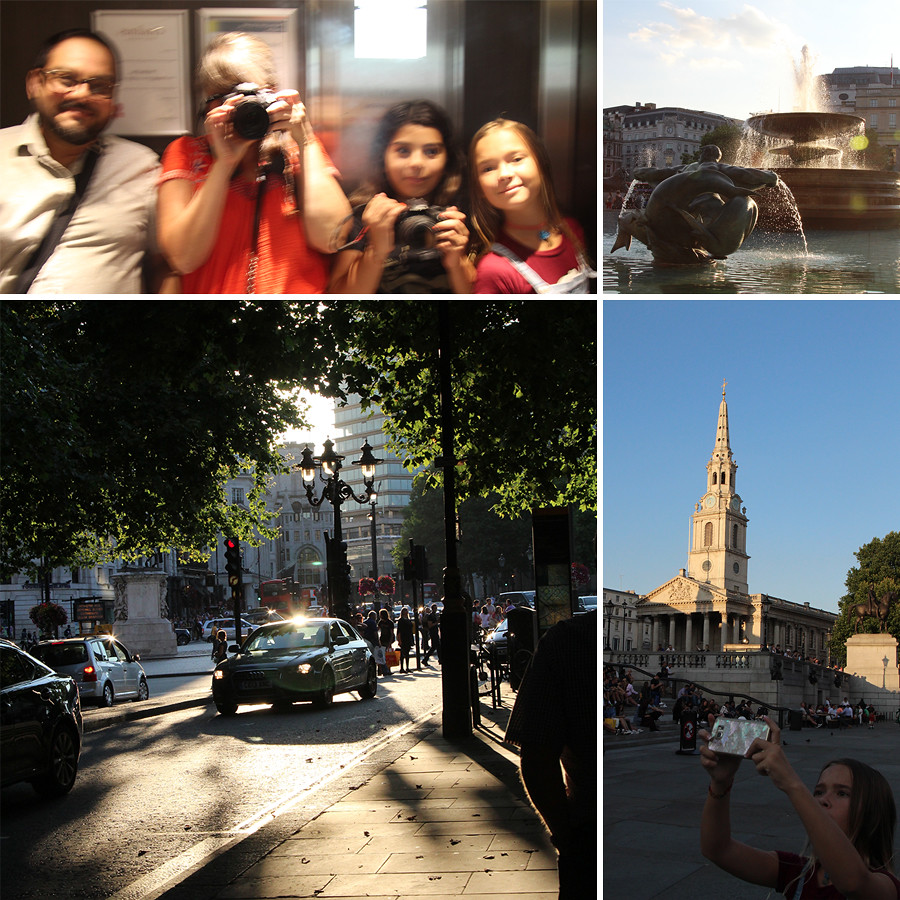 It was a mood that could only be cured by the most loving boyfriend who knows how to cheer me up like no other AND WONDERFUL SUNSET LIGHT! When everyone finally woke up and we got ourselves back down into town, the shadows were so long and everything was glinting with gold. Sweet-time light saves the day! 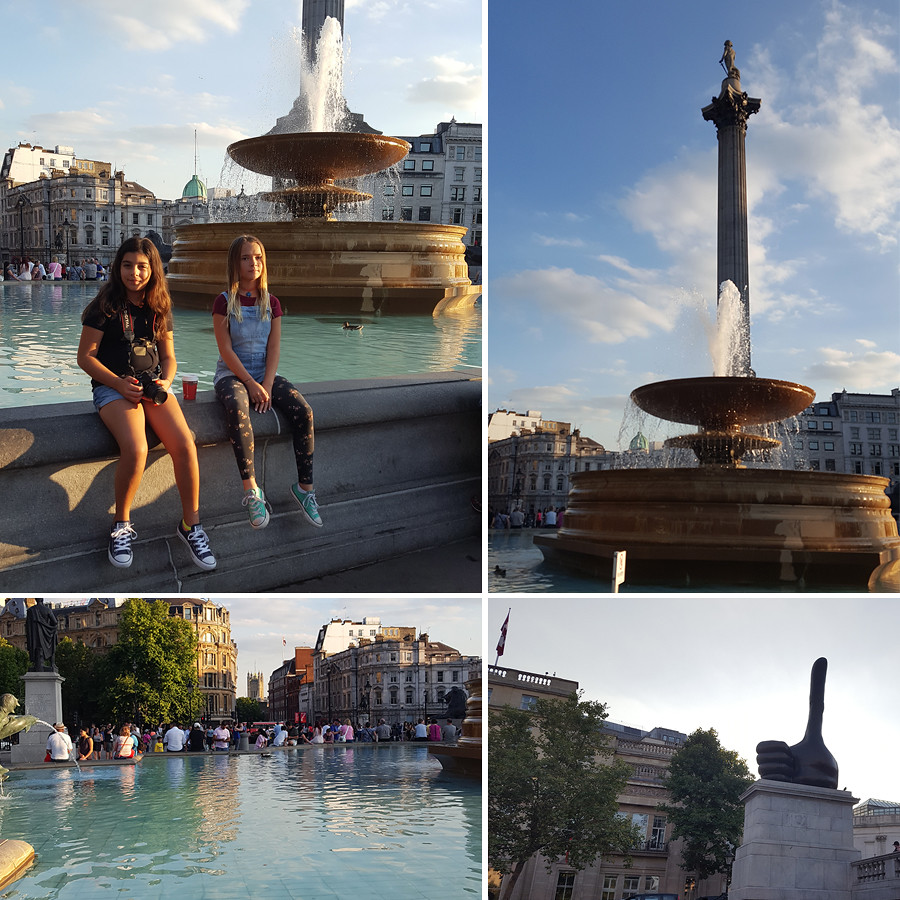 We walked around Trafalgar square, trying to stay out of crowds because of course we are all paranoid of terrorist now. 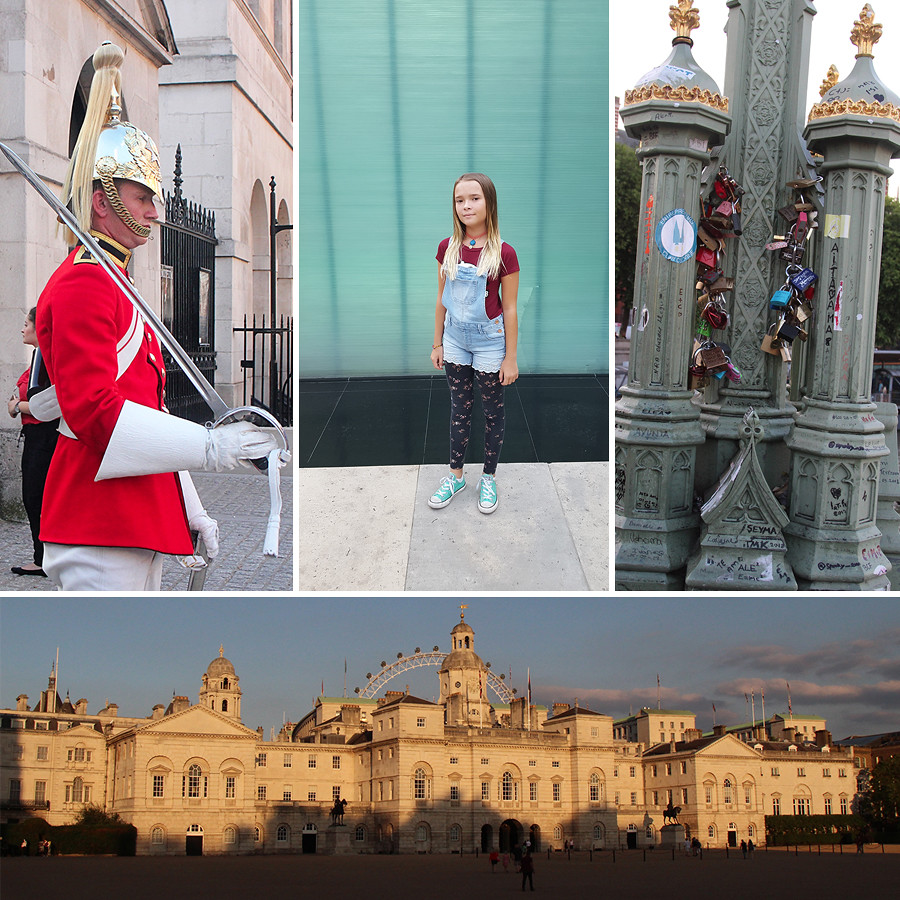 And through some kind of horse guard palace. I apologize I still do not really know where I am but we are taking a hop-on-hop-off bus tour today so I will be much more educated about things when I blog about day two. 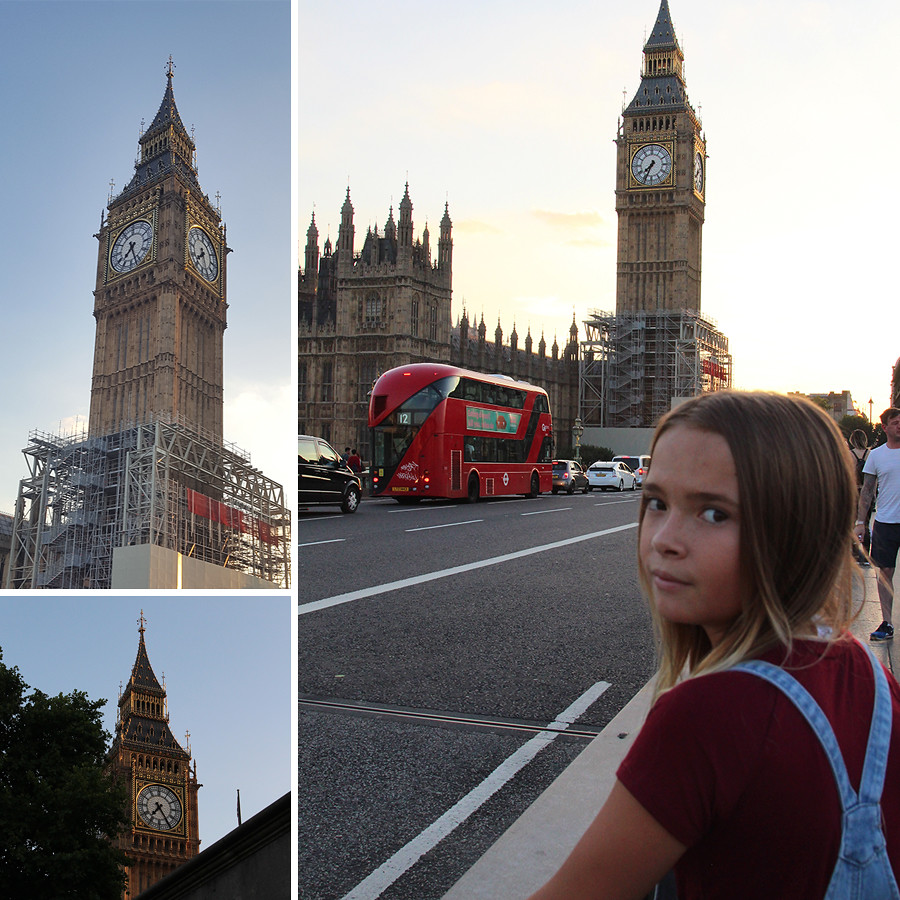 Then we walked by Big Ben. Big Ben is under construction so it is not chiming regularly but I’m happy to report that it chimed twenty times this morning at exactly 8:24 (an odd time to chime) and it sounded lovely! I rushed  past all the sleeping bodies this morning to our balcony to listen to it and I was not disappointed. 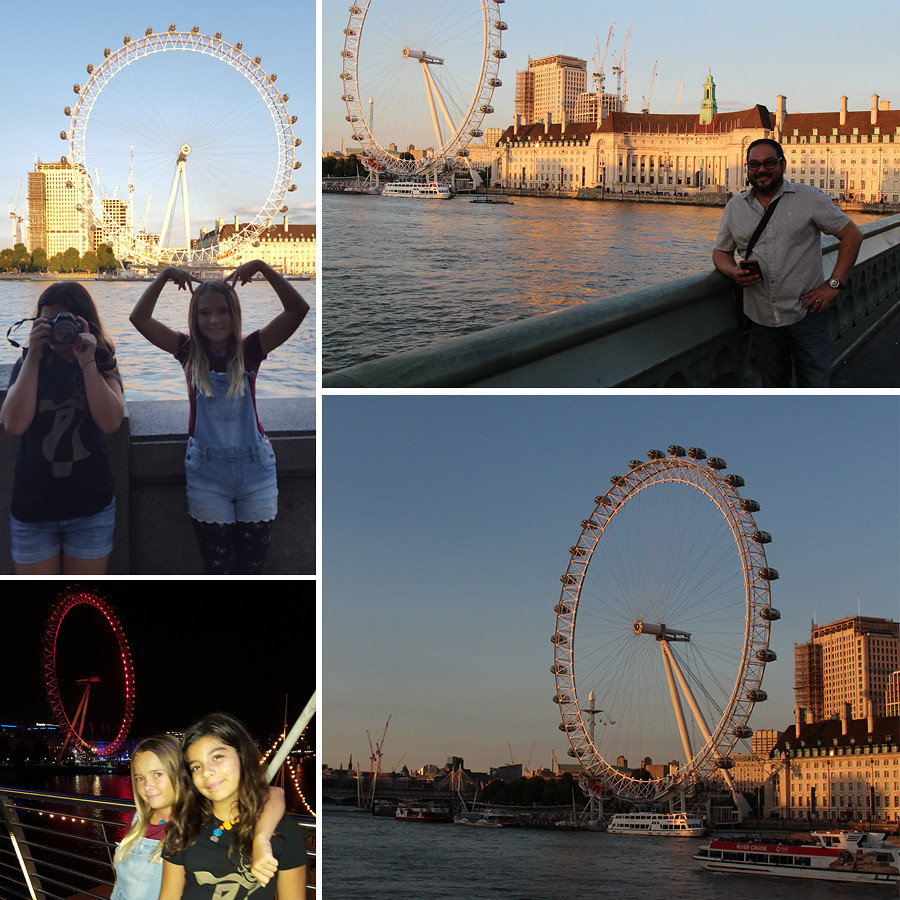 After Big Ben we walked over the bridge to the London Eye. We couldn’t take  ride in The London Eye as they only take reservations and were all sold out but we promised ourselves we would go make reservations online and try it again another day. Of course we haven’t gotten around to that but we have many more days to go. 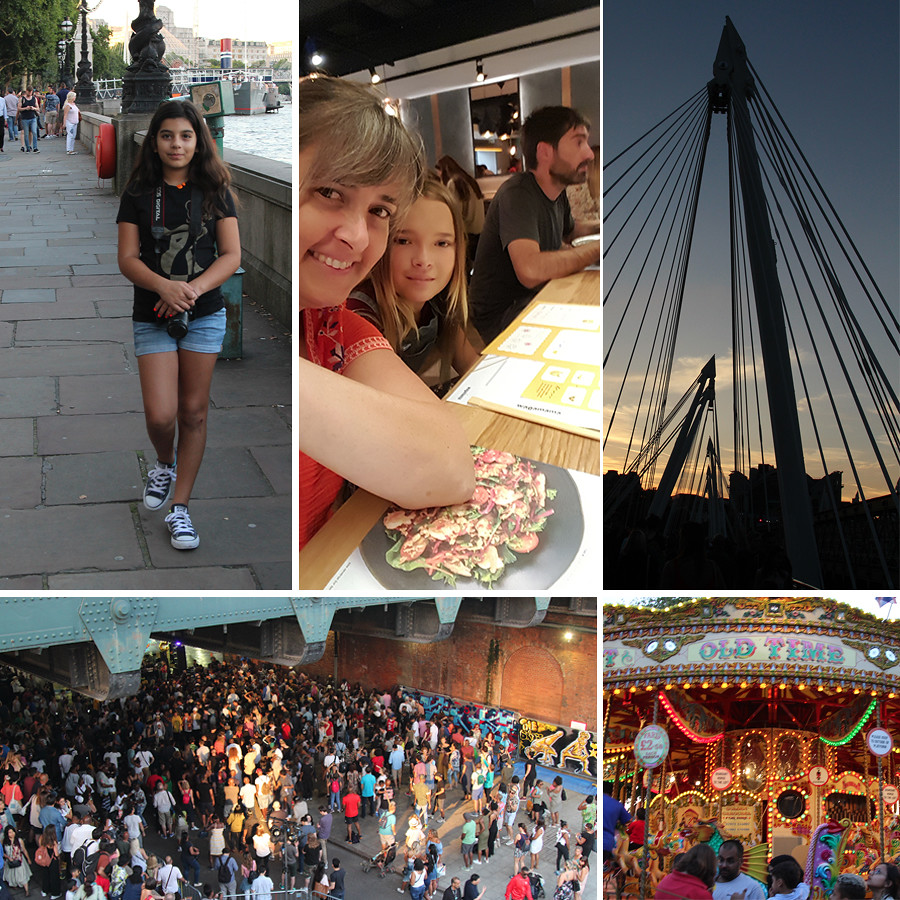 We headed back over the bridge, past a bumping dj party and ended up at Wagamama, a noodle restaurant chain that my friend Elyssa had told me about. It was delicious! 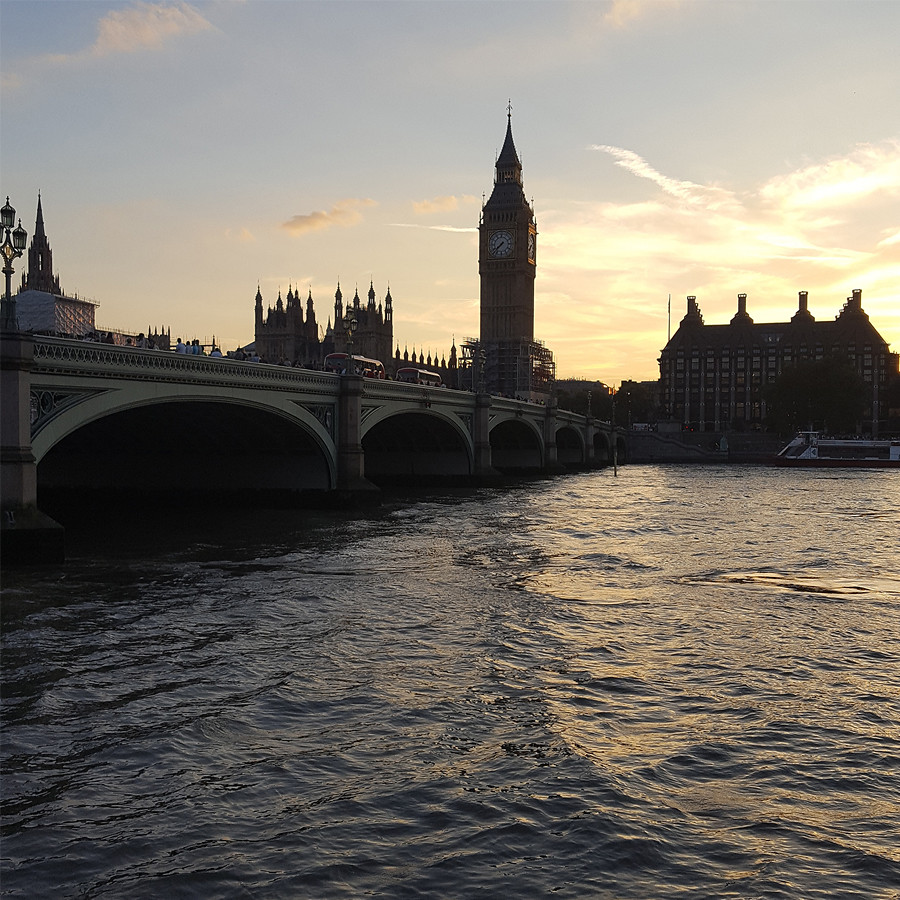