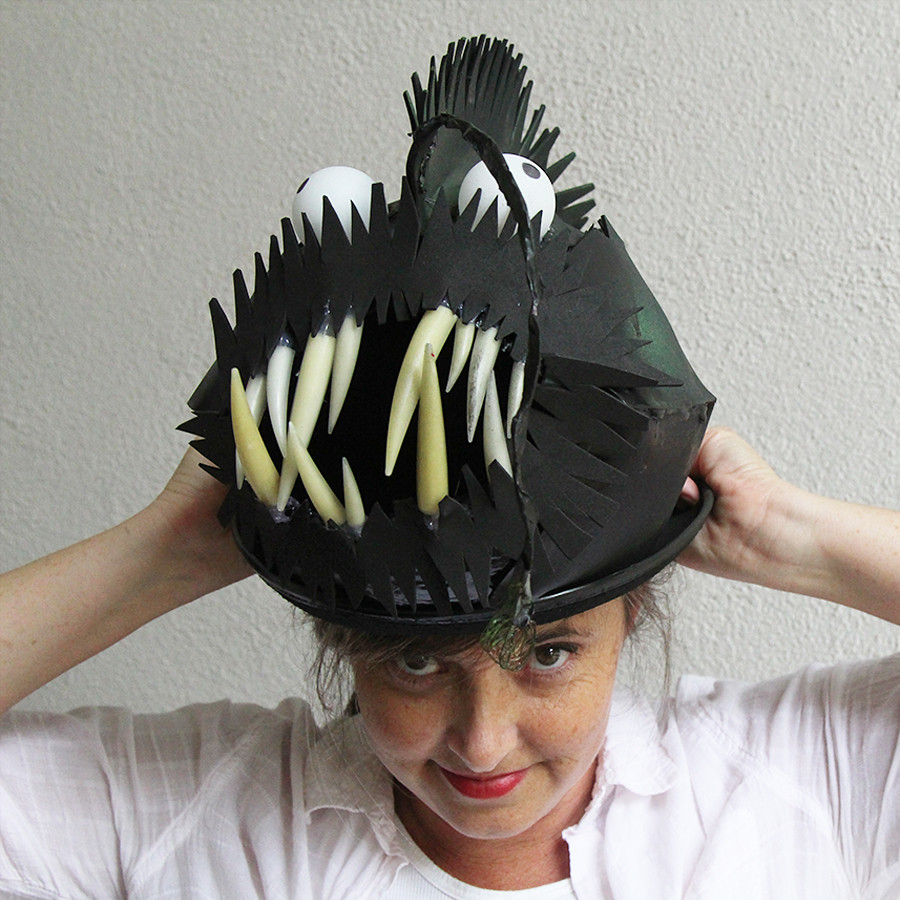 Our neighbors down the street commissioned me to make them some crazy hats for a charity dinner party they are attending that happens to have an under-the-sea theme. They knew I might be up for the task based on my paper-maché-snitch-piñata-making skills. Of course I said yes. How fun would this be? 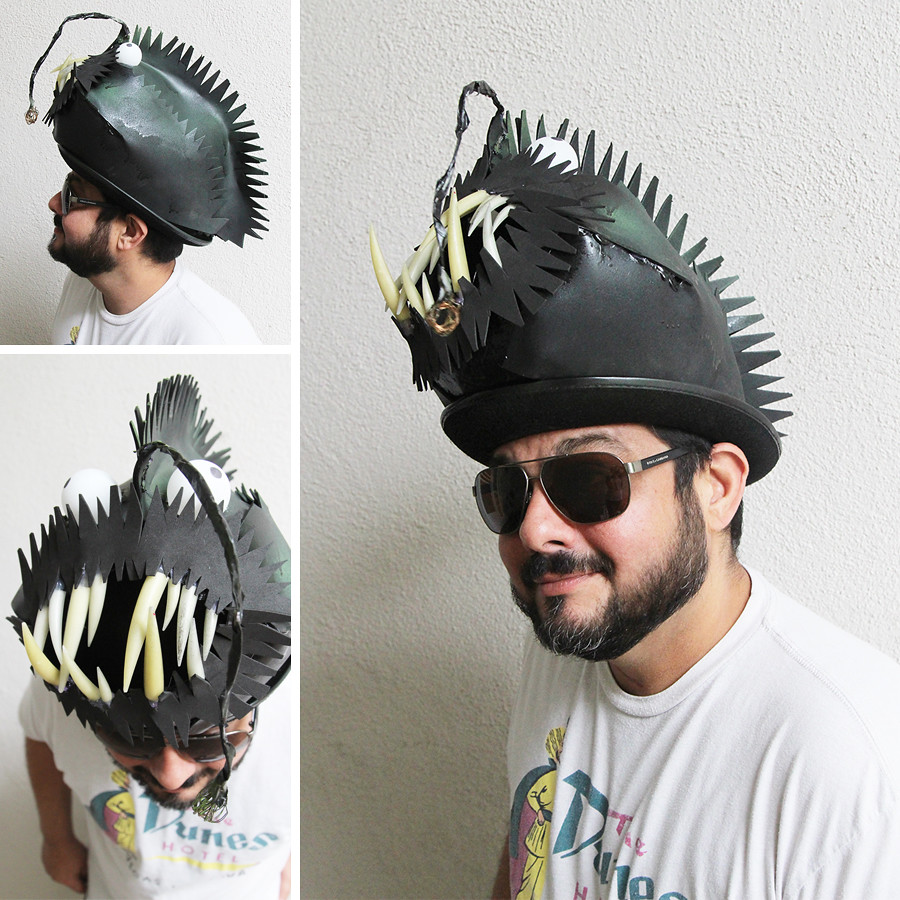 For the man they asked for an angler fish hat. Great idea, right? Sadly, this monstrosity fell very far short of my imagination of what it should be.  It looks pretty scary but there are so many things wrong with it. Firstly, I had to figure out a way to make the teeth (that I bought off amazon) splay outwards in a big bulbous way. The only way I could figure to do this was by paper-mache over a balloon. That worked but then I had to attach my bulbous shape to the hat somehow. 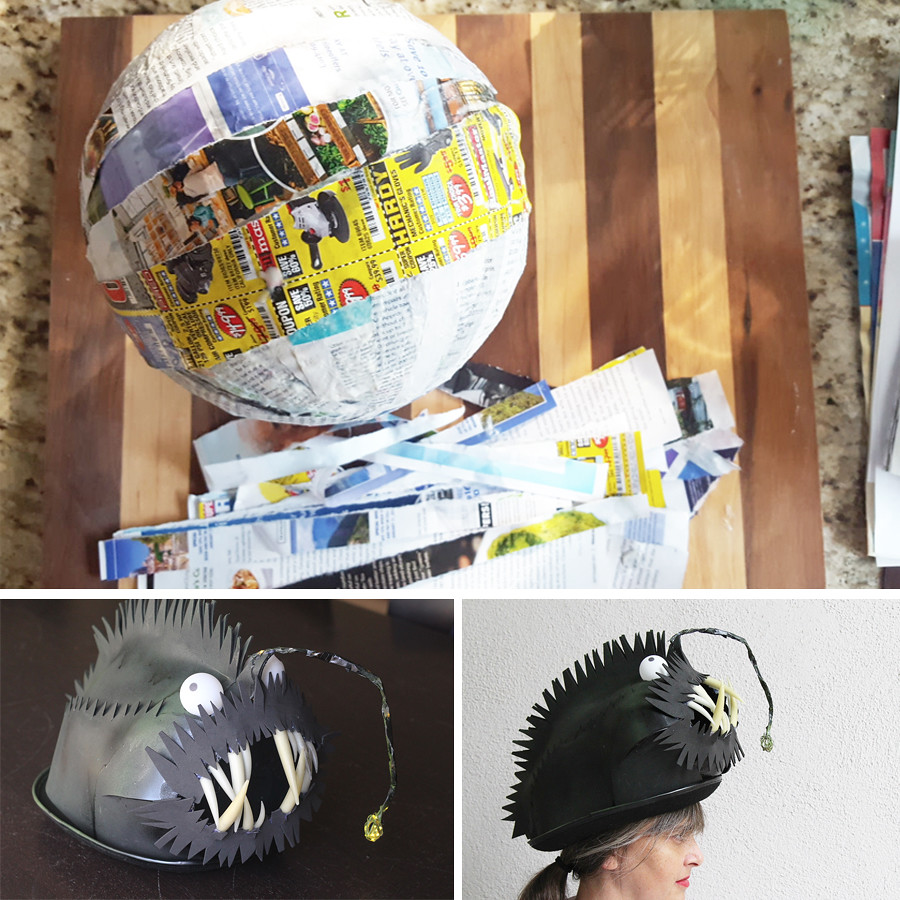 I ended up cutting the dried ballon so it lay over the front of the hat and then I attached it to the hat with wire that I had wrapped in newspaper for bulk. Then I had to cover up the wire and the balloon so I used black crafting foam. I think ideally I would have paper mache-ed the whole thing but I didn’t want the hat getting too soggy and I was running out of time.

Black crafting foam is a great medium that can be cut in all sorts of fun spikey ways but wrapping a flat square piece of foam over a round shape is challenging! I could have improved my pattern A LOT but you know me, I just forged on like non-perfectionist that I am. So that means the underside of the hat (the part you see the most when you are wearing the hat has this awkward open space under the mouth. It’s all spray-painted black but it looks like a hodge podge quilt. I guess angler fish aren’t the prettiest of fish anyway so we’ll just embrace it. Then I couldn’t get the foam to match up to the mouth so I cut these strips of spiked foam and wrapped them around like lips. I also forgot to spray paint those strips so they are matte while the rest of the fish is properly slimy looking. Groan.  I think overall it works if you don’t think about it too hard.

BUT! The noodle-y thing that angler fish use to catch their prey does light up! That’s why there is a pretty big opening between the teeth. That’s where you can squeeze your hand inside the mouth to switch the lights on and off. I used the cork fairy lights that I had used for our fairy jar craft. I just covered the lights along the string with masking tape spray-painted black.

It’s a big mess. But you wouldn’t know if I didn’t tell you, right? 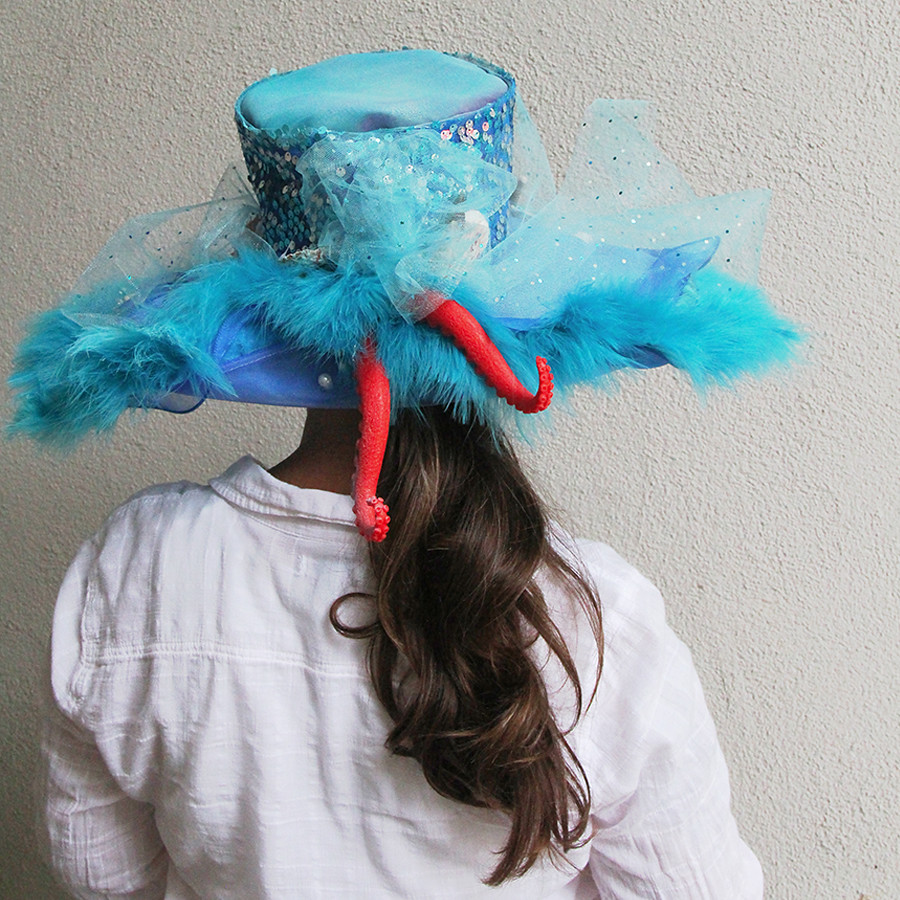 So you would think that this sea-foam under-the-sea woman’s hat would be a piece of cake, right? Compared to the angler fish hat this should be something I could do in my sleep. What could possibly go wrong?

Plenty! I did everything wrong. Firstly, I decided to add these really cool octopus tendril finger puppet things to the front that should be the back. Yep. I squarely did everything backwards on this hat. The front is the back and the back is the front and there is a big ol’ visible seam on the front. I always do everything wrong first. Except this time I couldn’t go back and fix it second time around because the tendrils were good and sewn and there was no ungluing the tulle and sequined fabric that I wrapped around and glued to the brim. But really, that’s not my first mistake. My first mistake was to buy the hat in blue and purple instead of just blue. 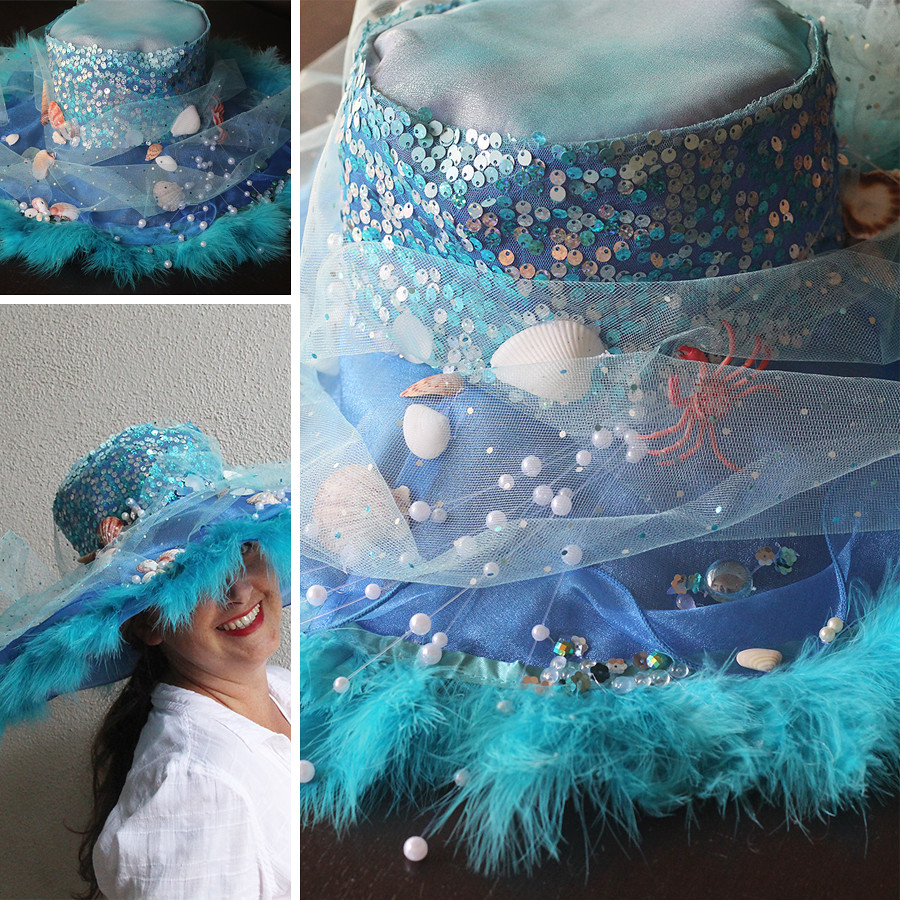 I ended up hating the purple so much that I spray-painted the top to cover it up. I wish I would have spray-painted the whole thing because the spray paint actually looks pretty good but by the time I figured that out I had already glued dozens of shells and bubbles and pearls and sequins to the hat and they would look horrible turned all flat blue.

So that’s that! Pretty cool but riddled with problems!

Thankfully the recipients will probably neither notice nor care! And now I know how to do it right if I ever need to make these again. 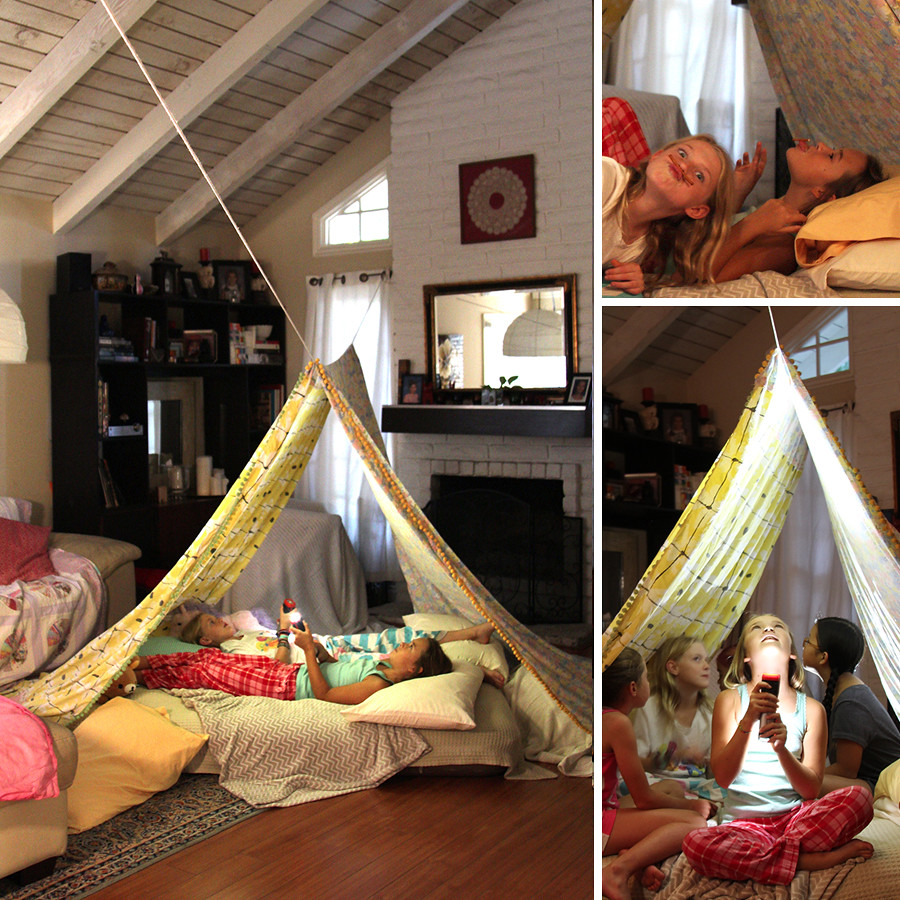 We are back home and now it’s back-to-work time, which is not going so well but fortunately right before we went to London we landed this really fun Energizer Flashlight post. The deadline was super tight but the girls and I managed to learn morse code, make morse code bracelets AND pull off a sleepover photoshoot in our living room, all days before we left for London! Fun right?

Maybe I’m better under pressure? Don’t tell anyone though because I hate it!!!! I am such a mad woman when I’m trying to make the images in my head show up on camera the way I see them. Everyone around me hates it too. 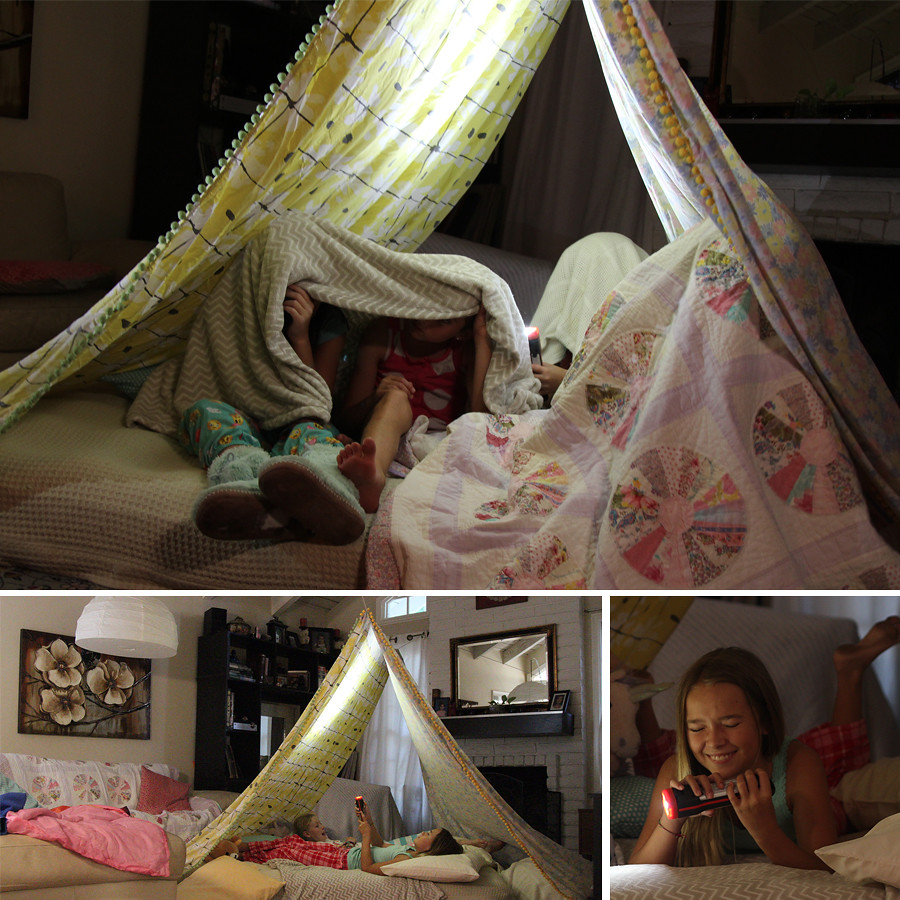 But we managed! Bug is a great model since she’s been “posing” for me since before she could even talk. She doesn’t even know she is posing most of the time because my directions are muscle memory for her. (Though she has been doing this profile chin jut lately with ice cold eyes [not pictured here, maybe in the wedding post below] that I’m just not getting. I’ll just chalk it up to tweenagerhood and finding her own identity.) 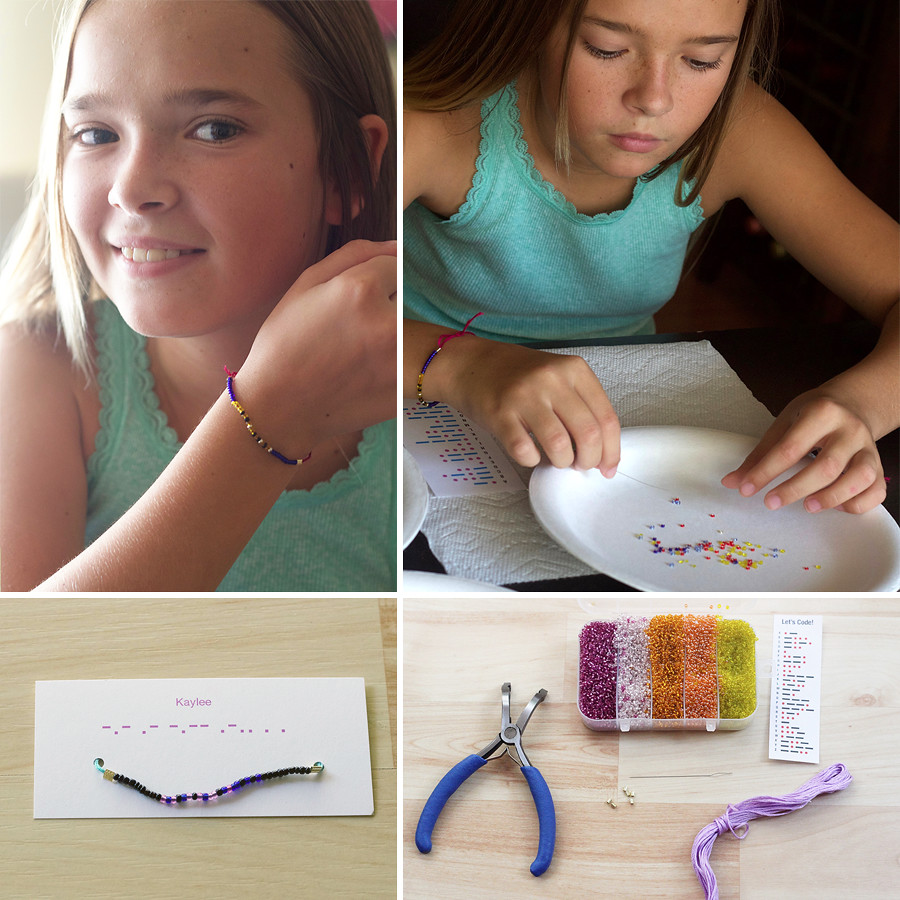 But do check it out! We loved the morse code bracelets we made. I thought they’d only last a few days because they are only made with embroidery floss tied in a knot but the girls kept them on for almost a whole month! We might have to make them again with something more durable. They were quite a hit!