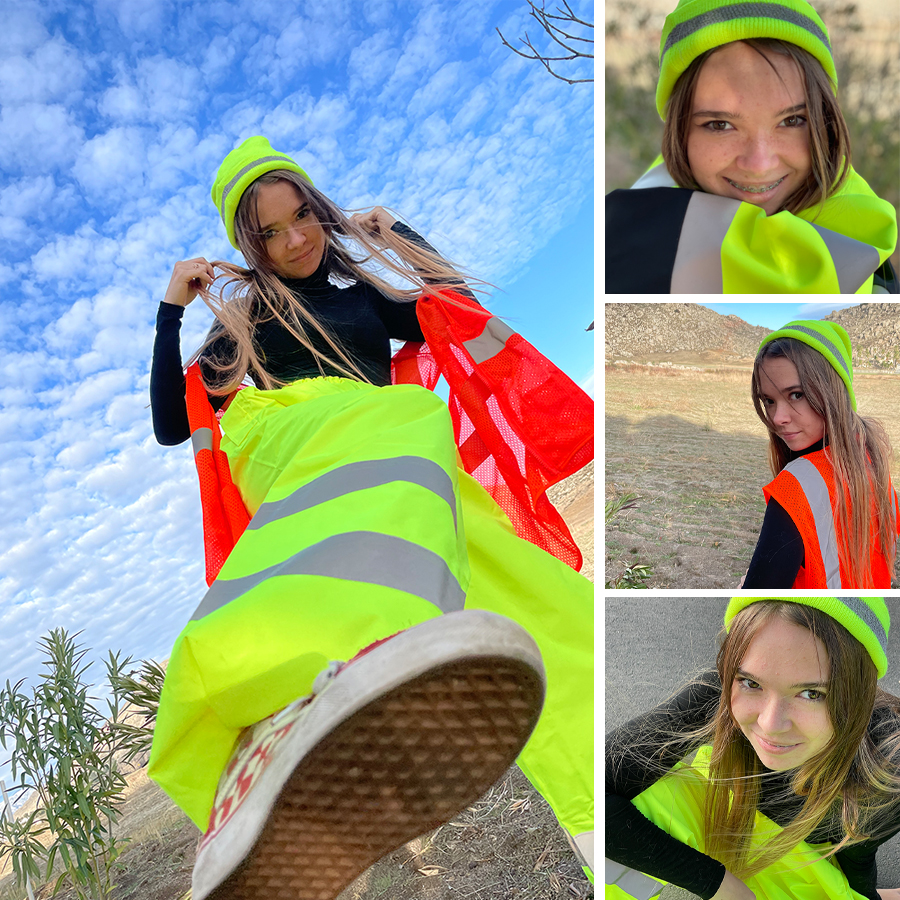 I thought I’d take a break from reporting on all the things that make me worry these days and post some fun photos from a photoshoot Bug and I did at my parents. My dad has hired me to get his social media account going for his business. I’m not an expert but I am available for the very low price of FREE so he’s very happy with my work. :) It’s slow going of course but I plan to post at least three photos a week for him. It should be fun. 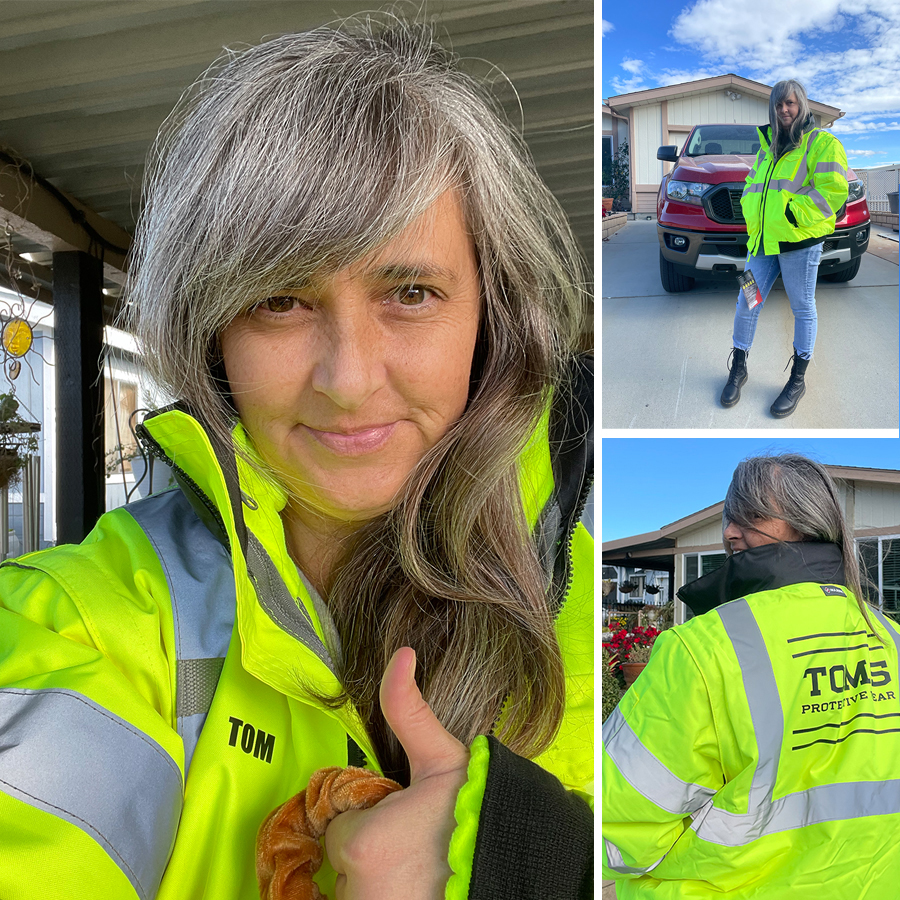 I tried to model but I just don’t have it like I used to. I’m representing for the gray hairs in the house though. Woot! Woot! 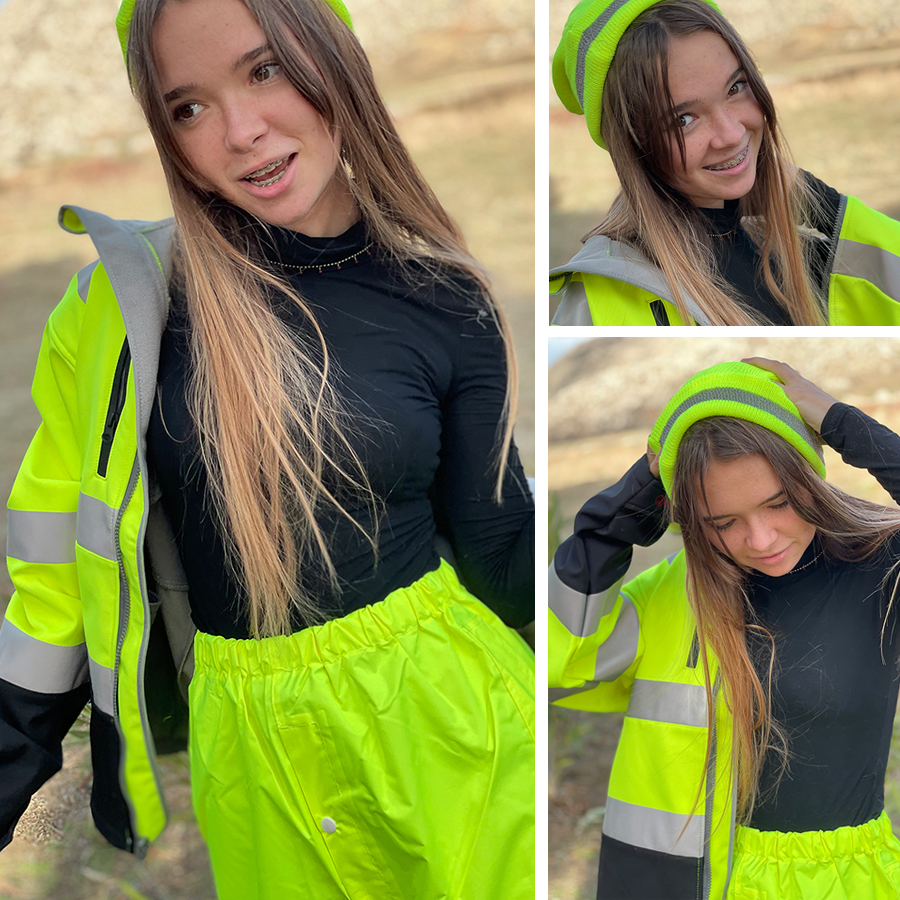 Bug is a natural model, obviously. It doesn’t hurt that she’s been posing since birth and she’s taken direction from photographers her whole life. 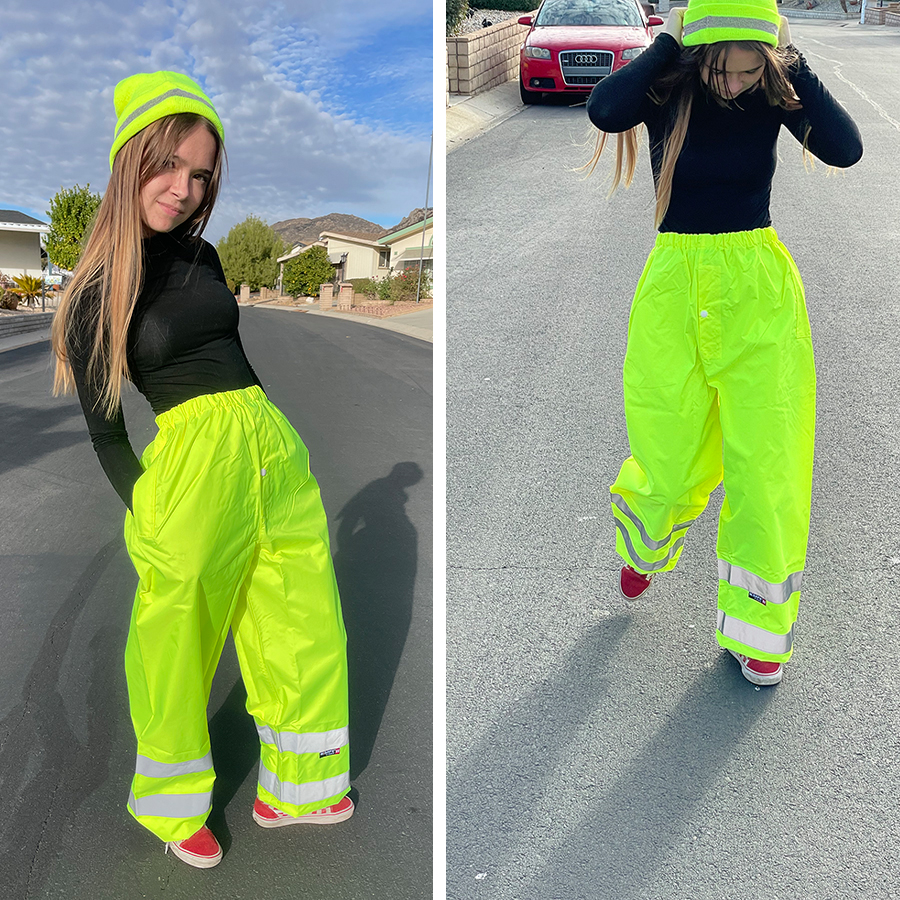 These pants, aren’t they crazy? They are supposed to be for people directing traffic in the rain but I’m thinking Bug could start a trend at her high school if I let her. They make a ton of noise when she walks. Swish, swish, swish! Watch her swish down the runway. 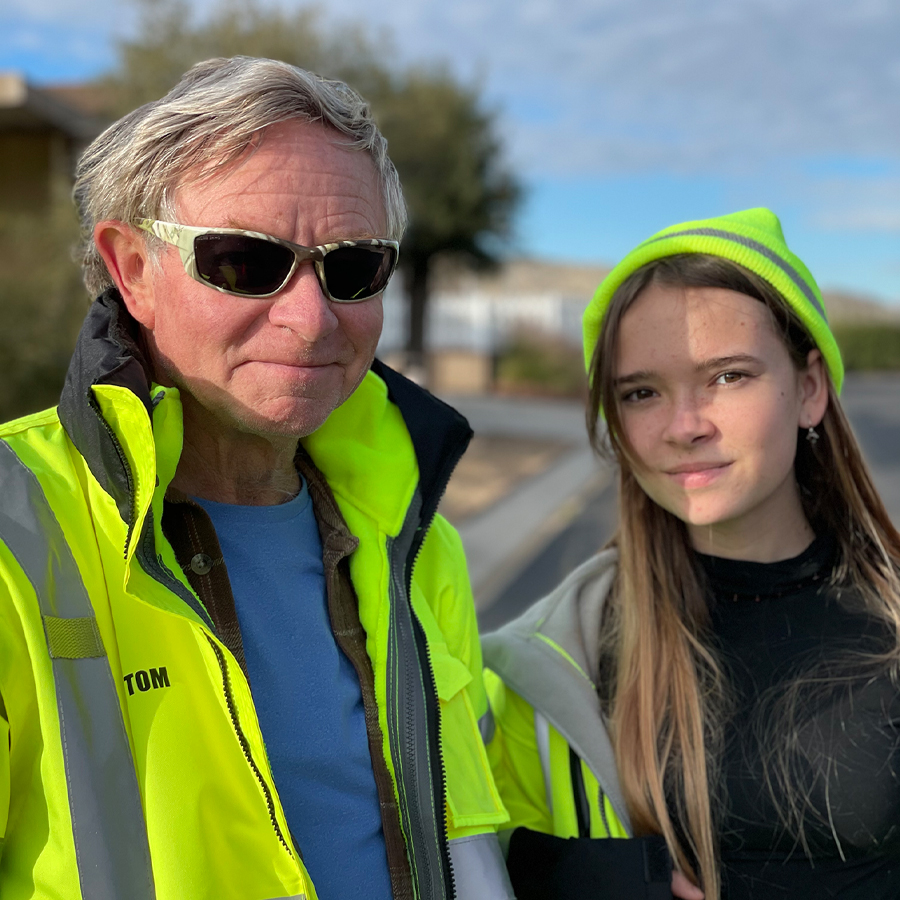 My dad is really passionate about his business. He sells protective wear for emergencies service people and search-and-rescue teams.  It started out as a hobby when he was selling gloves for truckers but now it’s a full time gig that we hope someday pays his bills. I hope I can help him grow it. He lives and breaths all things Community Emergency Response Team.

If you know my dad, you KNOW it’s all he talks about and you’ve probably watched the FEMA movie about teen CERT teams. He’s taken the class and he’s started a CERT team in his community. He calls up CERT teams all over the country one by one, talking to them about everything CERT and how he can help them get reflective 8-in-1 bomber jackets. He’s trying to get us to become CERT members too and I think we will when the pandemic is over but for now we’re packing our go-bags and passing the word along to you.  It is a really good cause and I think everyone needs to think about it. It seems like everyday some new bad news drops from the sky, it can’t hurt to be ready for fires and earthquakes and I don’t know… zombies?! right?

I said I wasn’t going to talk about what I’m worried about. Let’s talk about giant baggy reflective pant fashion!

I took a minute off blogging. Not on purpose. At this point it’s the monthly illustrating-a-new-banner habit and boy did I work hard on this one. Why? I don’t know! It’s just a thing I have to do. Have you guys watched The Social Dilemma on Netflix? I’m sure you have. It’s pretty good. It gave me a lot to think about so maybe blogging is my small way of sending good content out into the world to fight the evil monster algorithm. It’s pretty scary when you think about it. But it has helped me to put social media and the internet in perspective. 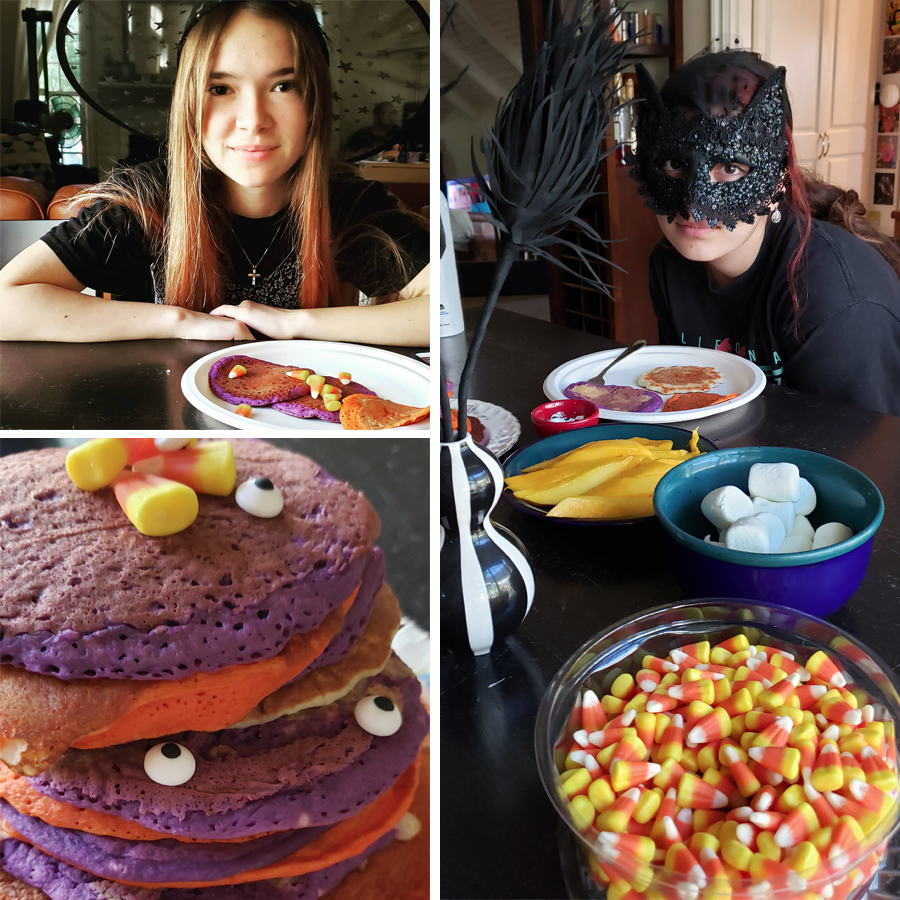 Nobody is happier that it is Halloween Season than Bug. Just when I thought I figured out her last aesthetic (dreamy white walls with delicate botanical drawings, plants everywhere, natural textures and boho hippie vibes…) she goes and changes it! Now she’s really into dark gothic designs and loving anything Victorian. If it’s complicated and patterned and dark then she loves it! But she’s always been this way. When she’s into something she’s passionate about it!

I guess we are two of a kind that way. The other day we found a new taco stand and they had these wild blue turquoise painted stucco walls. So we posed in front of them of course. 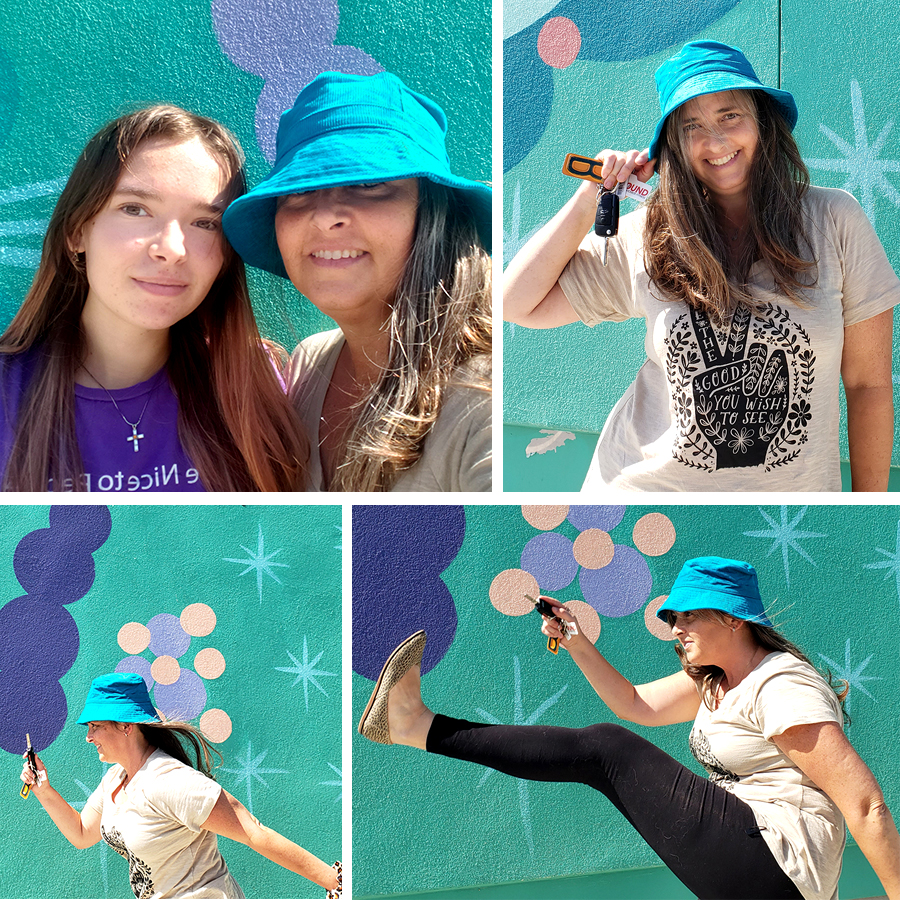 I recently purchased a turquoise bucket hat so it was kismet. 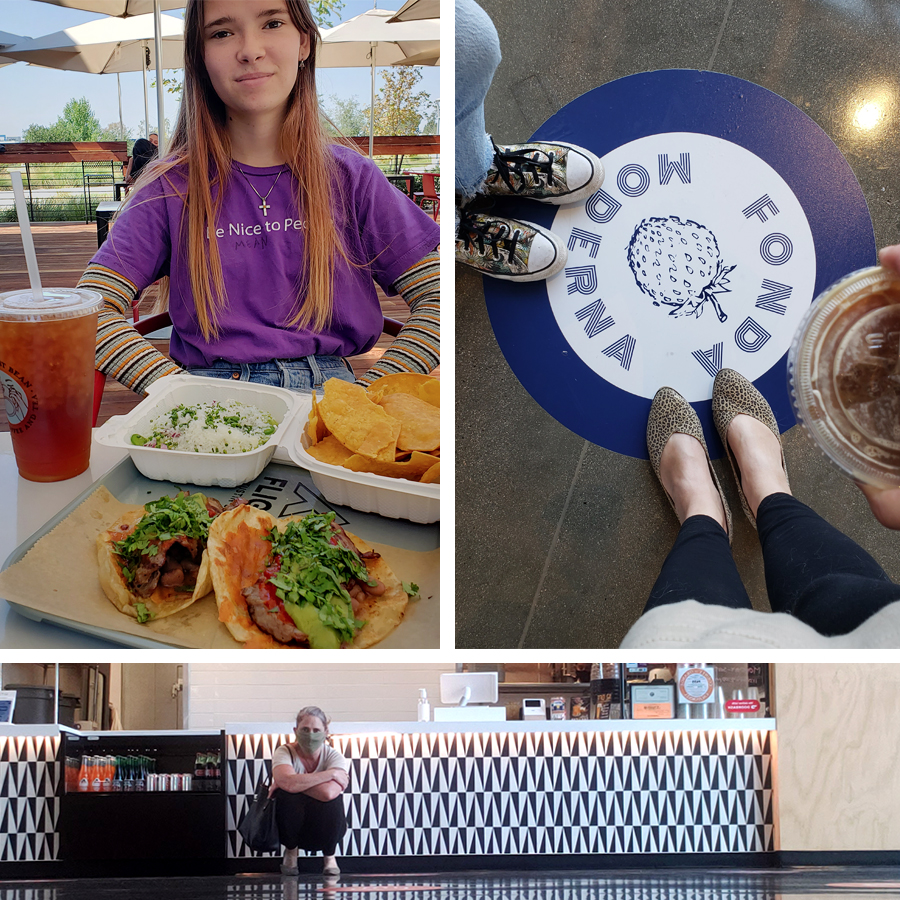 This is the taco joint we found. I recently hired an accountant to help me figure out my mess of finances now that I’m a big fat corporation (not) and I have a feeling that the accountant is going to put the kibosh on all these out-to-lunch adventures Bug and I often go on. I think it’s going to be time to get back to basics with peanut butter and jelly soon. 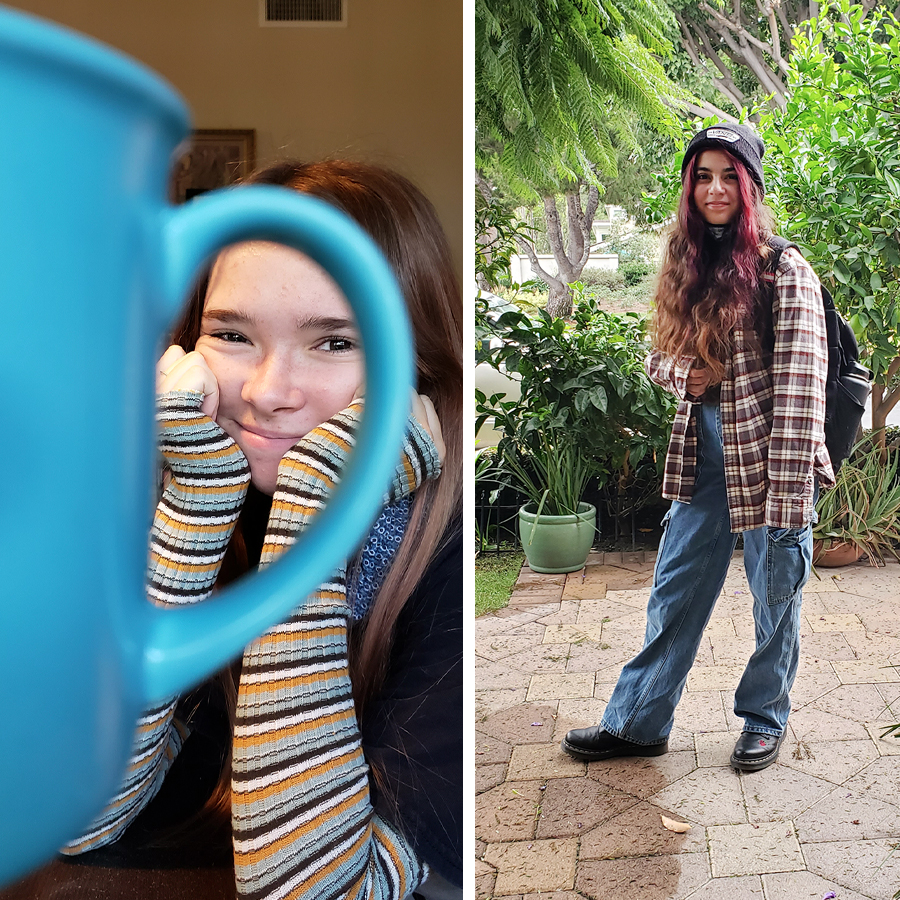 The girls are back to school two days a week on the hybrid model. They love it. I’m so so. But I do feel a lot better knowing they are back at school only half the time with half the amount of students. It’s a numbers game I guess and at this point I’m weighing their mental health against their chances to catch covid. I guess we’ll just wait and see and take all precautions.

Back to school for my girls means dressing like you are in the nineties. And by nineties I mean the Kirk Cobain era, not the fact that it has been over ninety degrees outside. I don’t know how they can wear long sleeves and docs when it’s sweltering but they do. Sweat in the name of vanity I guess.

And speaking of vanity, 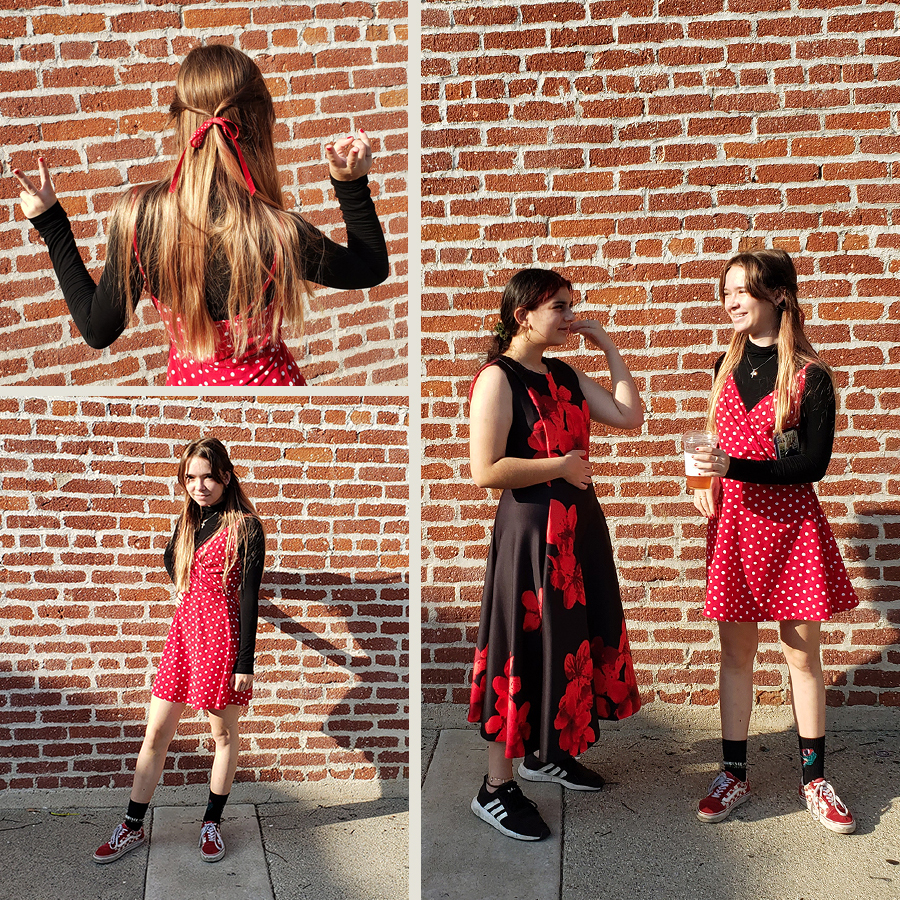 Guess who likes her picture taken again! I am so happy to accommodate with the fashion photography. Work it girl! I do love her fashionable choices. She’s getting more and more inventive every day and I love it. 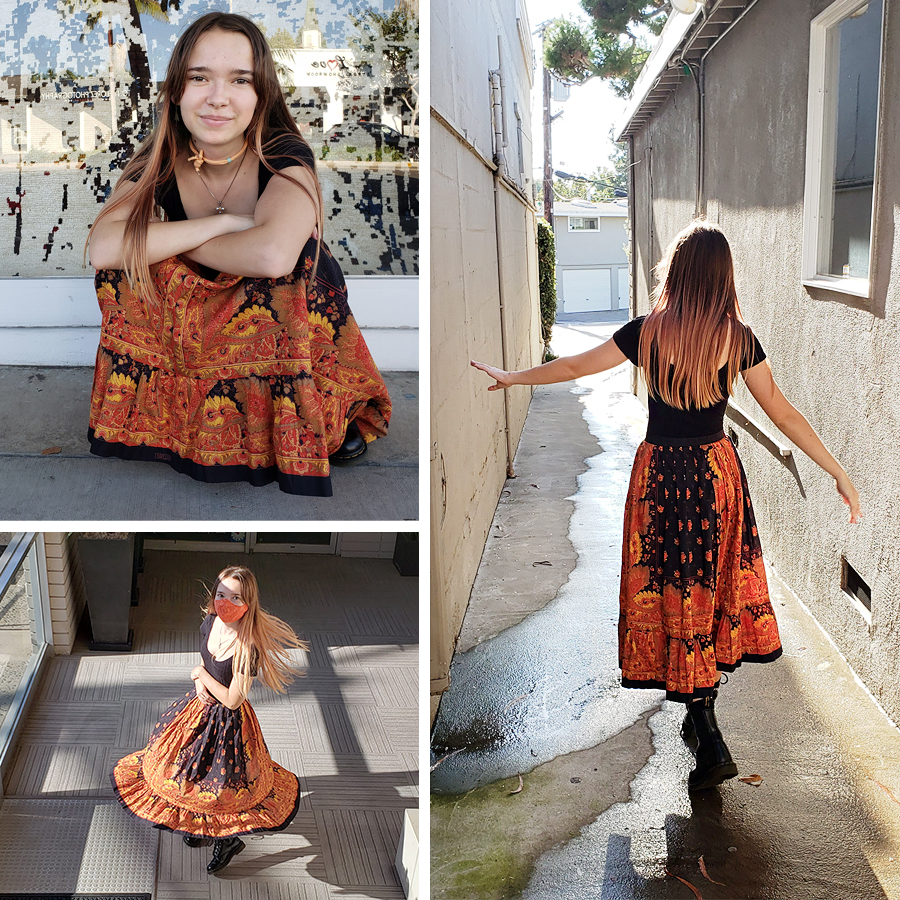 The other day we popped into a thrift store and she found this vintage Parisian skirt. I would have never picked it up myself but now that’s she’s been wearing it regularly, I am loving it too! It’s really well made with one tiny button at the waist. I think it’s super cute on her. 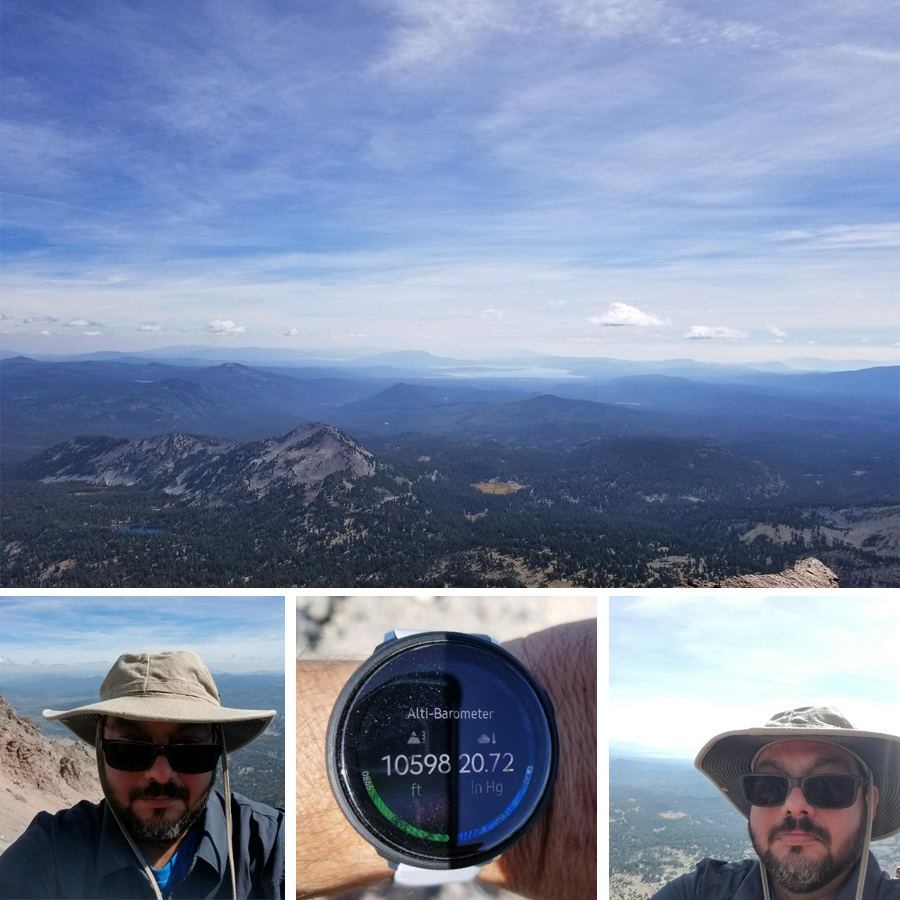 In other news, Payam made it back from hiking Mt. Lassen!  We are so proud of him. He set out to do something that seemed impossible and he did it! Now I just want to go back and do it with him! 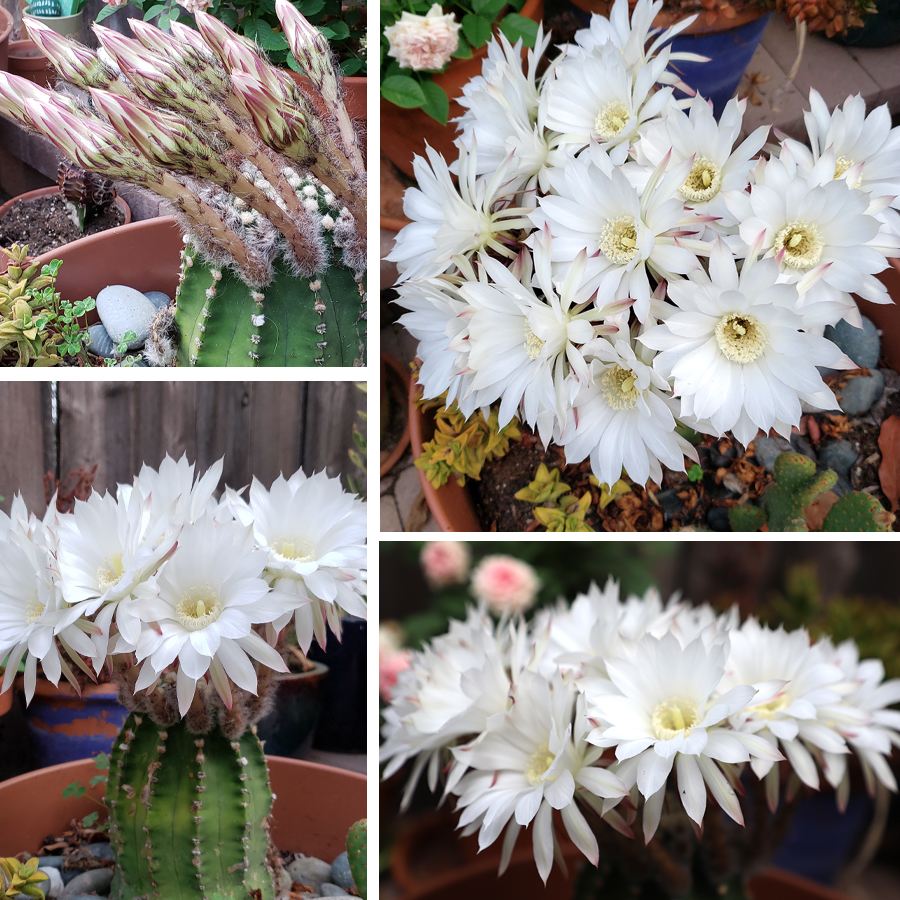 Meanwhile back home my favorite cactus has been putting on a show. 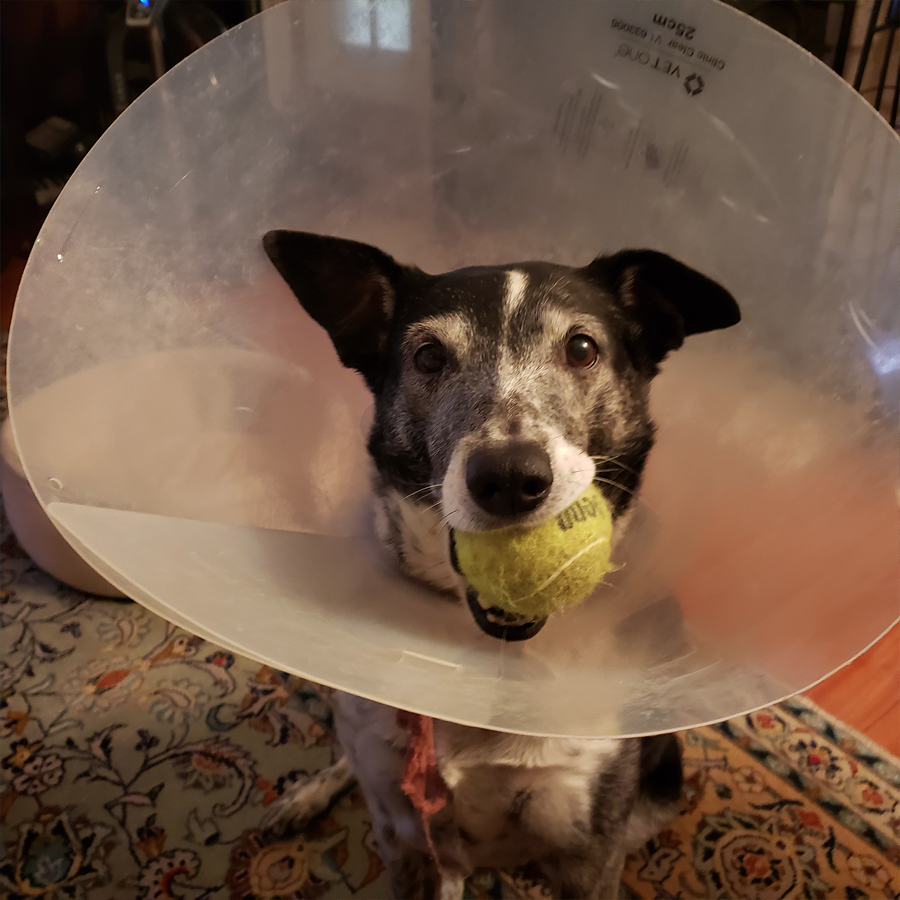 Oh! I’m babysitting my mom’s dog, Spreckles. This dog. She is going to be the death of me. She’s wearing a cone because she scratched her eyelid and wouldn’t stop itching it until it was raw and hairless. I took her to the vet and they gave her some meds and she’s pretty much better now.

And she bit my friend Lubna.

Yes, I said that right. Lubna is fine but it was a scare and a half.  Spreckles has a biting problem and we forget about it because she is a super sweet dog when she’s not a rabid crazy biting dog. It causes us a LOT of stress. She’s a Kingsland Healer so she has instinct to herd animals (or people) by nipping at them. When she gets scared (like if someone unintentionally gets in her space) and will lunge at them. Usually, we can avert this problem by giving her her beloved tennis ball (she’s psycho about the ball) but if we don’t have a ball when she encounters someone new it can get really dicey. She probably feeds off my fear and gets even more defensive and protective of me. Anyway it’s been a super nightmare because I am scared to death she’ll bite someone and really hurt them and then they will sue me and my life will be over.

I’m being dramatic but it was really scary. She bit our cleaning lady once when she went outside to throw out some trash AND she tried to bite the gardener through our screen door and knocked the screen door out of it’s track. Thankfully I had her muzzle on and nobody was hurt but still. Scary dog!!!!

Except that she is super sweet to me and nuzzles her little nose into my lap while I’m typing this. How can you put down a dog like that? It is a real conundrum. 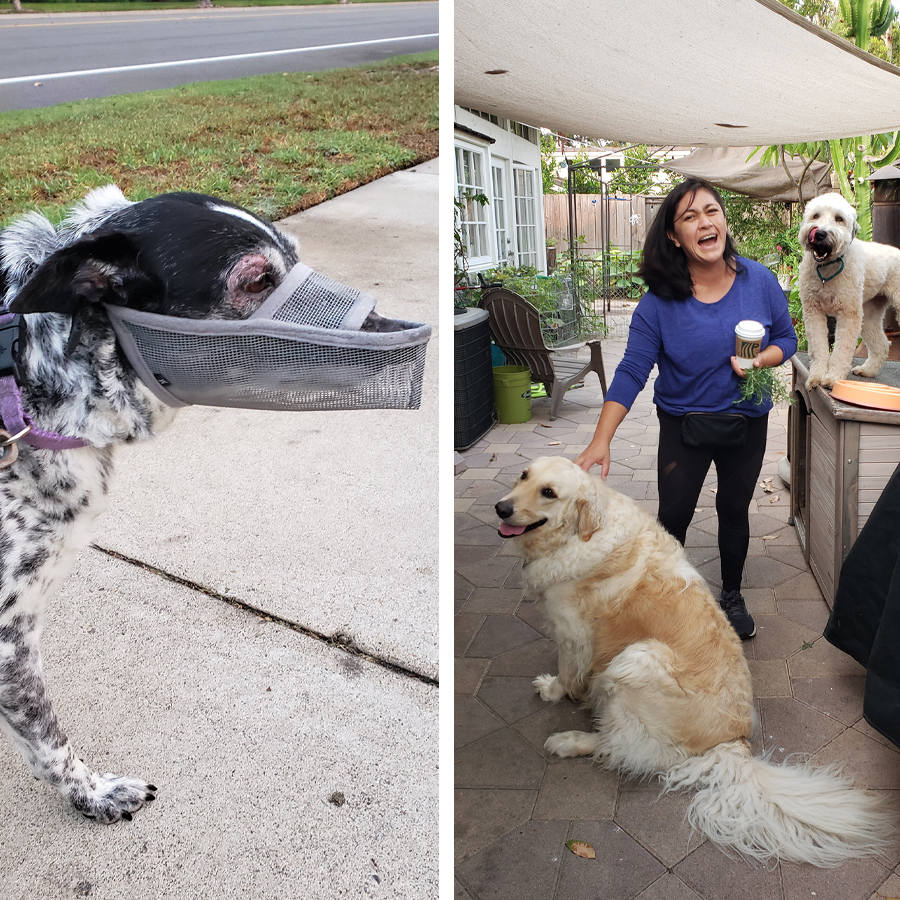 I found a muzzle for her that is super cool. She doesn’t mind it either. In fact, she is really happy to put it on usually because I always put it on when we take walks and she’s associated it with getting to go out on a walk. You can see how red her eye was. It’s better now. The muzzle is soft and mesh and she can easily breath with it on. It also doesn’t look too scary like a dungeon dog or something

Taking walks with all three dogs is the regular three-ring circus it has always been. Except I think it’s worse now that I am afraid of her biting someone. I’m also worried my dogs are picking up on her habits because now Whiskey growls and lunges too but he hasn’t bitten yet. SO enter one of my favorite friends, Maria!! I love Maria for so many reasons but recently she has started walking the dogs early in the morning with me and it helps a ton to have some extra hands. 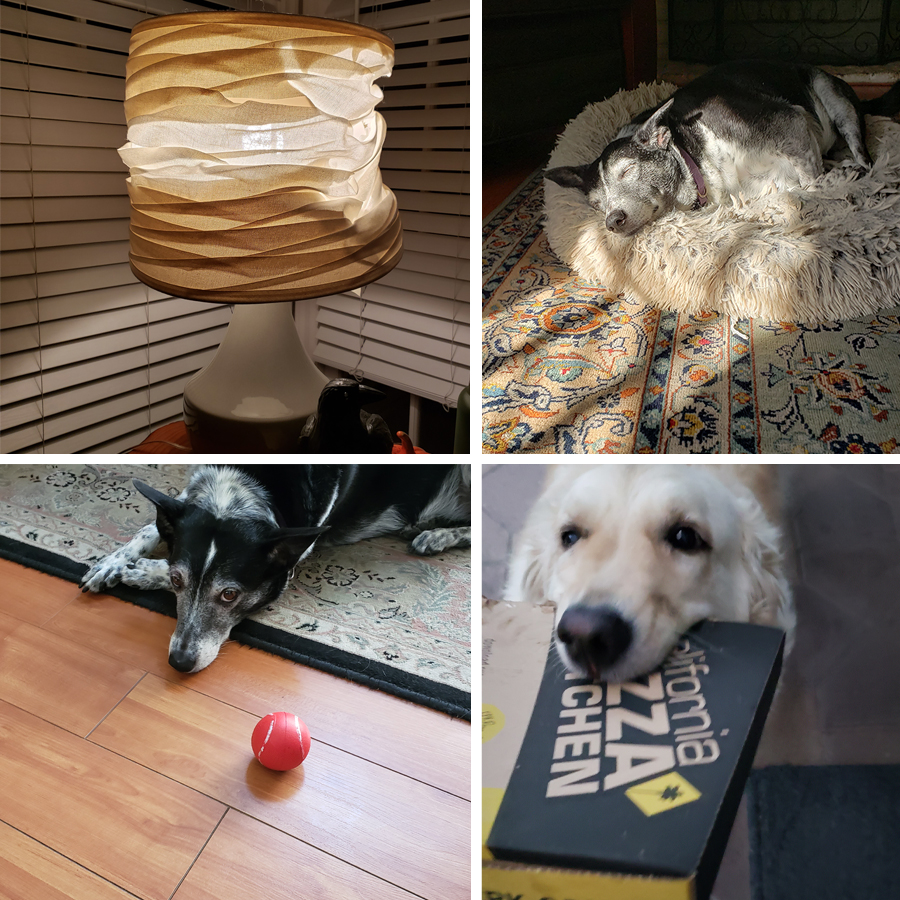 So yeah. A real dog circus. Have I mentioned that Spreckles is obsessed with her ball? She was trying to get it from under the couch (where it always seems to go) and she pawed at the cord of our lamp and knocked it over and busted the lampshade. Dogs, man.

I think that about catches you up. See you next month! Unless I get back here sooner.