posted in artsy fartsy, Family Matters, Life Lessons, spilling my guts on May 3, 2014 by SAJ 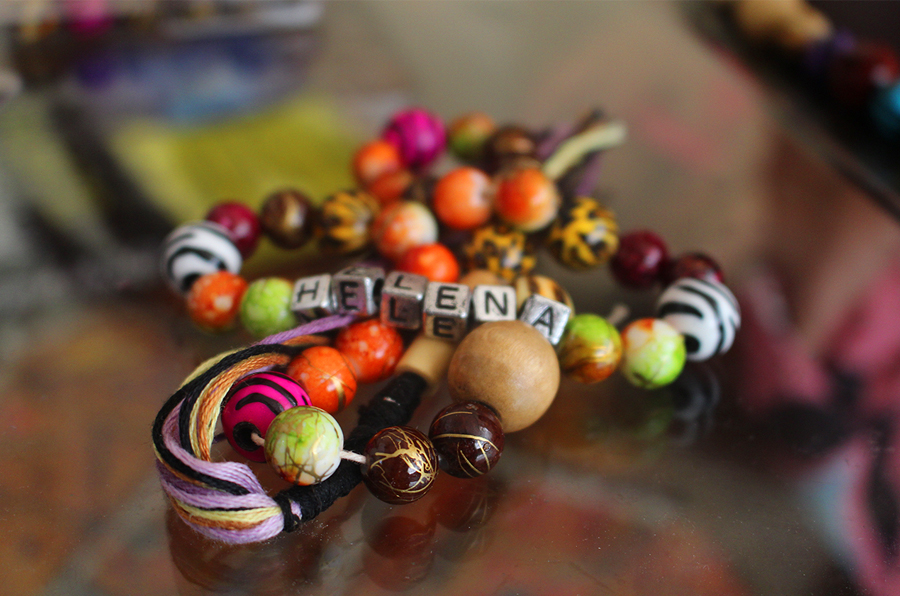 The elephant in the room that has stopped me from blogging (and going home to visit my family…ugh, I know!) is that I’m dating a man who is not a Christian. (!!!)

There. I said it.  This is a huge big deal for me and my family and all the friends who’ve helped me leave my marriage.  Many people who care deeply about me think I am making another mistake.  I’ve pulled away from people that I know won’t approve. Of course it hurts.

Maybe my fears are worse than reality.

He’s kind. He listens and understands when I don’t expect him to. He is a philosophy major so we talk about my  faith and his lack of faith often. It’s not swept under the rug.  Our future is messy and I can’t see beyond the next curve. Since I’m a five-year-plan kind of woman this scares me, of course.

However, I think we are in each other’s lives for a reason.

He has a daughter Bug’s age. We see each other at school and the park and we even have play-dates sometimes. It’s terribly convenient but of course we are cautious. He’s an ex too and nobody wants to replace anybody.

A lot of you know that Bug struggles with anxiety. To sum up a long story in a short sentence: It’s been a rough year.

Her dad and I waffle between  telling her to tough it out and worrying that we aren’t offering her the help that she needs. We’re so afraid that she’ll be labeled, held back, treated differently if we give her special treatment but then when you see the fear in her eyes, and the fact that she can’t even walk up the ramp to her second grade class without dry heaving, you just want to wrap her up in your arms and take her home and let her finish out the year home-schooled.

But we don’t think that is the answer. We think it would make it worse actually but of course we could be wrong.

That’s the hardest part for us as parents is the second-guessing.

We’ve talked to professionals.  We make sure she gets balanced meals and plenty of sleep. We’ve found comfort in prayer and reading the bible. Bug more so than me, even. Bug has become a regular little Pilgrims Progress requesting Proverbs and Fear-Not verses daily. We’ve tried mediation, and all kinds of re-setting the brain tricks. We’ve read books and worked workbooks.  We’ve pretty much talked to everyone under the sun.  We’ve found a therapist and had one get-to-know-you meeting.  I have mixed feelings.

I finally understand how people feel when they say they don’t want to talk about it anymore. I’ve had so many strangers reach out to help Bug. She’s so adorable and everyone loves her.  I totally get that and appreciate their intent but sometimes I just want to stop strangers and say, Yes, I have looked into your fish-oil-sweat-of-bees-vitamin-supplement-drops-electro-accupuncture-shock-therapy-musical-bears-yoga-pilates-ballet-therapy. Yes, I’ve tried to talking about “my happy place” and it doesn’t work!  Please, just stop talking to me and let me get through my day with my crying child. And then I secretly punch them inside my head.

Maybe I’m suffering from a little anxiety myself. (See part A) I dreamt I accidentally let another women’s children drown the other night. It was horrible. And then last night when a car alarm kept going off every twenty minutes between the hours of 11pm and 3 am, I dreamt I was in a parking lot maze with various members of my family jumping out from behind cars as zombies. I dreamt that if I could just find the car that was honking and blow it up with my bazooka, I could finally save Bug and escape to the next level of life.

But I didn’t write this post because I wanted to let you inside my brain. I wanted to share this craft that my friend made with Bug and his daughter. It was very thoughtful and it touched my heart.

He’d been thinking about Bug a lot and he wanted to share something that has helped him over the years: Prayer beads.

This is where I have to take a moment and talk to my family and friends who are conservative Christians.

I’m not converting to Islam.  He is not even Muslim and even IF we were ever to blend our lives (which I can’t see because it’s behind a curve still!!!)  he would never ever ever want us to convert to Islam. He is an American. He’s lived here most of his life and he wasn’t even raised Muslim. His parents are non-practicing Muslims. He’s not going to beat me or make me walk six paces behind him.  I’m not going to start praying on a prayer rug or hang a clock on the wall that wails at me at three in the morning. I hate that I even have to preface this sweet craft with defensive disclaimers. I hate that I even have to be controversial and take on this subject. You know me. I hate this.

I know some of you don’t understand why I’m even feeling defensive but I have friends at all spectrums of faith and there have been times in my life where I have been that very conservative Christian and even taking a yoga class seemed like a way to open up my mind in ways I shouldn’t. I was not raised with prayer beads and they seem very Catholic (which I am not) and Muslim (which I am not). When I pray, I pray openly in sentences, not in repetition. I never understood prayer beads.

But now I do. They don’t have to be beads that you say prayers with. You can pray with them of course but they are more of a way to say a mantra over and over without losing track of where you are.

I remember when I was getting married I was a complete basket case (Bug doesn’t fall far from the tree) and Toby taught me to say over and over, “It’s going to be okay. It’s going to be okay.” whenever I would start to panic.  It worked.  Sometimes when your mind gets stuck in a hamster wheel of worry, you have to stop it by forcing it to go down new paths.

Prayer beads are something you can touch as you force your brain to go down new paths. As you push each bead around you say to yourself something positive. Bug says, “It’s going to be okay. Nobody is going to puke today.” 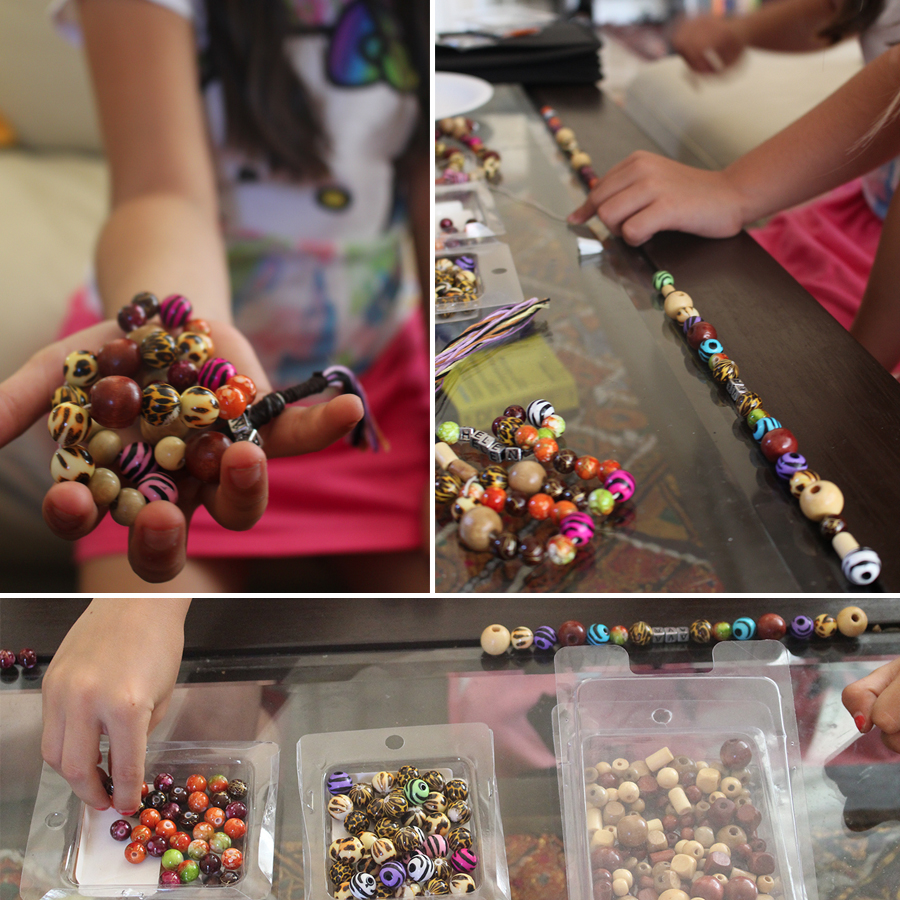 When my friend gave Bug the prayer beads that he made for her we went out to get frozen yogurt and made a production out of it. He explained how it helped him when he was going through rough times. It was really really sweet. Then later we went to his house and she made one for her friend who also suffers from anxiety. 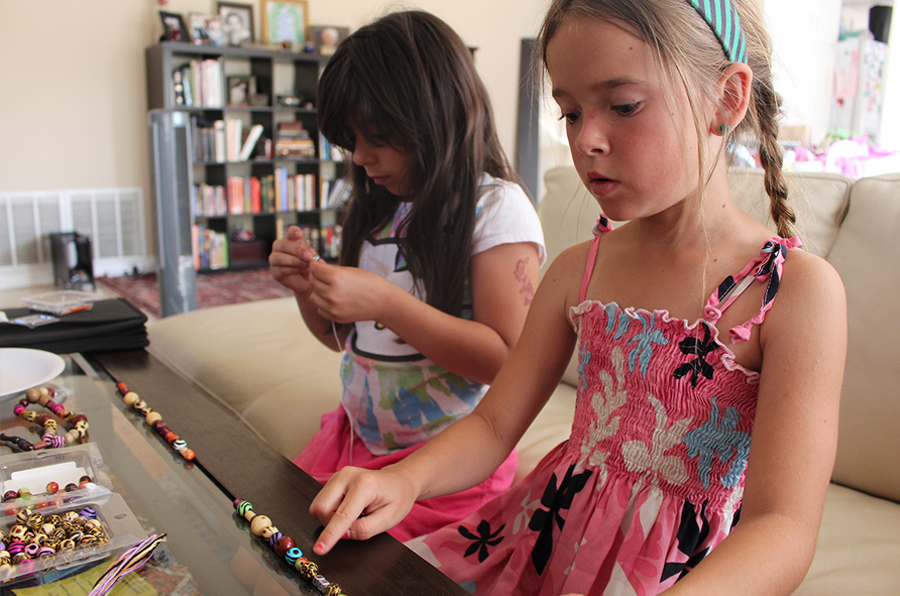 They counted out pretty beads, lined them up in a pattern in a crack on the coffee table and then strung them together with very fine string. Then they wrapped the ends with embroidery floss and made a tassel. It was strange sitting back and not being in charge of a craft for once. 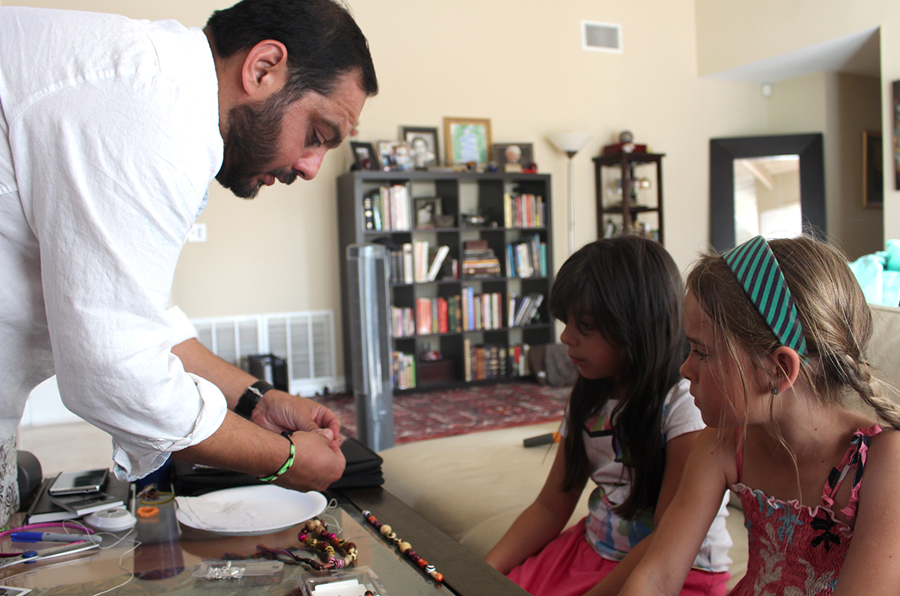 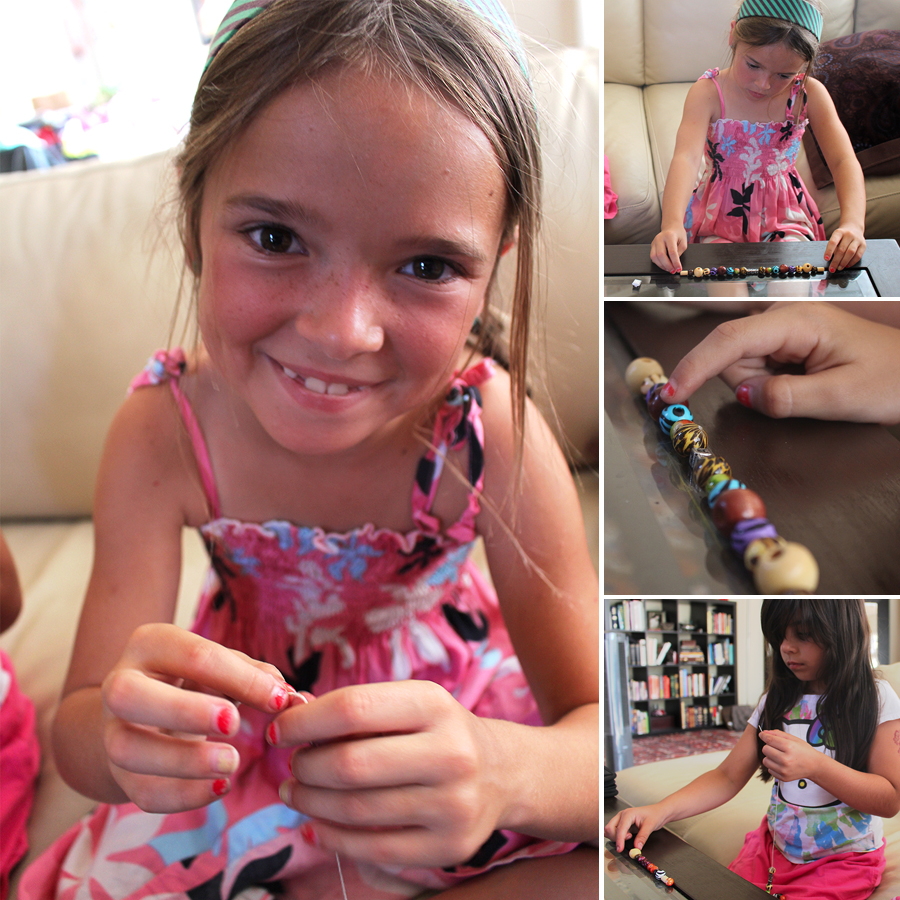 And then we went home.

I’m sad that I had to mess up this really pretty craft with all my internal arguments. What a drag, right?

Moving to Irvine has been a really big learning curve for me. We are surrounded by a lot of people from different countries with different faiths.  We’ve made so many new friends and opened our minds to so many new things.  Good things, not bad things!  New foods, new customs, new traditions, new feelings… it’s a new way of life. I like it. I’m happy here. Even though I feel like a foreigner sometimes, I feel like I belong here. 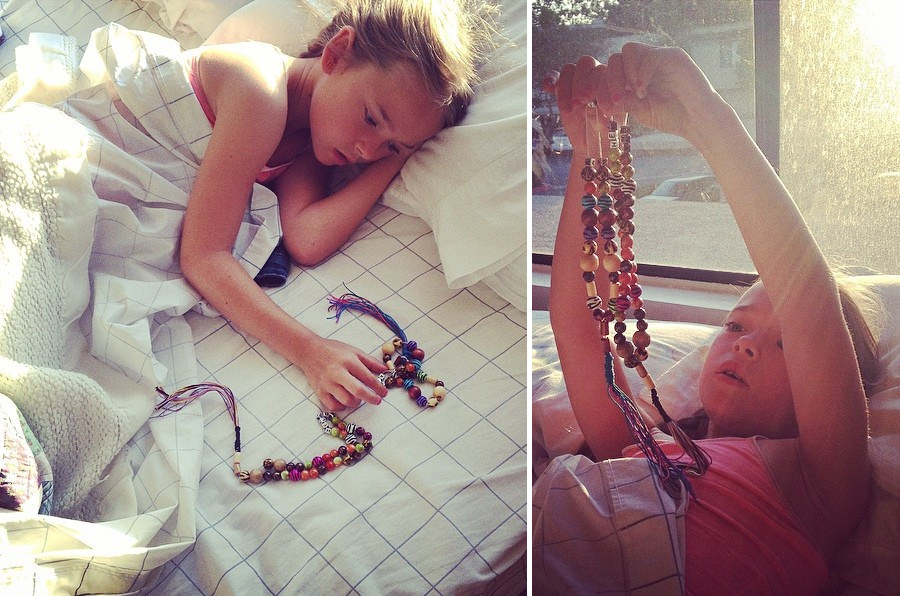 I just want to say from my heart that I appreciate my past and everyone. I don’t want to turn my back on anyone. I’m just afraid of the criticism. I miss this blog. I want to let you into my life and how it is going. I really really do.  I also want to ask you to please try to understand.

New things are scary but they aren’t always wrong.