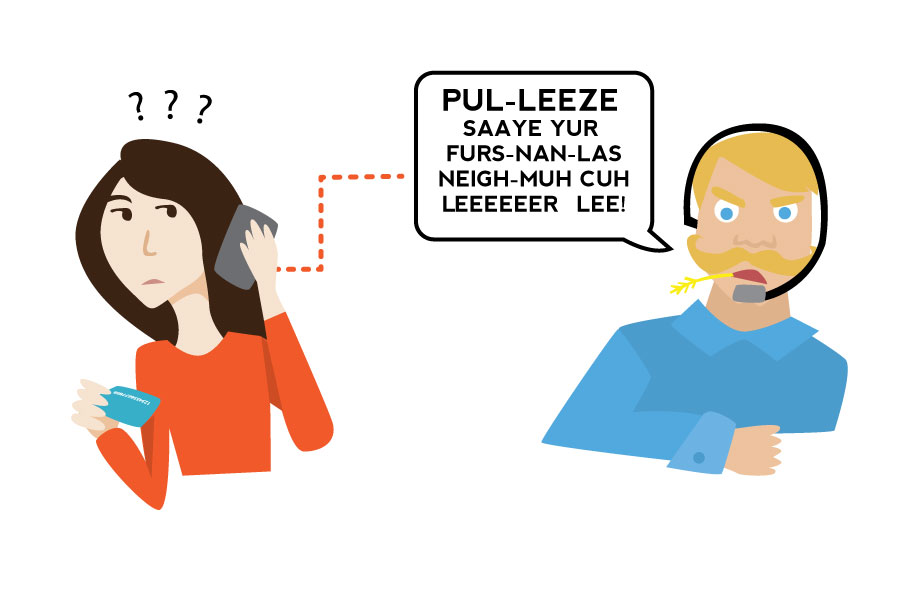 I’ve talked about my neighbors from Iraq here and there. They’re wonderful neighbors and we’ve gotten very close over the two years that we’ve lived next door to each other. They come over constantly to hang out. They bring food. They invite us over to their house. It’s a great big happy family.

From time to time they bring me letters and forms that they need help figuring out. English is tricky. American red tape is even more so.  Even though they’ve been here for two years (and studied some English in their mother country before they even moved here) they struggle with English. Sheesh! I even struggle with English sometimes and that’s all I’ve ever spoken. I would not fare as well as they have if I was suddenly dropped in the middle of Bagdad.

So the other day the older sister, Noor, came over and told me that her identity had been stolen on her debit card. She’d been to the bank and they wanted her to call this number to resolve the situation. She’d tried several times but had trouble getting through the recorded menu tree because she didn’t understand all of the words. So I sat down with her and called the number with her.

OH MY GOODNESS what a comedy of errors that followed. I have had it so up to here with people who judge others based on their accent and their inability to speak English perfectly. I see it all the time and it drives me crazy!! I’m serious.

The other day we had to call the police because a neighborhood teenaged boy had cornered Lubna on my patio while I was gone (I had paid her to do some gardening for me) and when the policeman showed up to make a report (at my request) he was SO rude. I understand that policemen have to remain objective and they can’t jump to conclusions that you are an innocent victim. I totally understand that. But I do NOT understand why he would give a fourteen-year-old girl the third degree with his questioning just because she doesn’t speak clearly and doesn’t understand every question immediately after you yell it at her in your condescending American jargon. I was right there. He actually spoke louder instead of clearer and treated her like an idiot because she didn’t understand his questions. It steamed me up so bad. And that’s not even touching on Lubna’s fear of police based on her experience in Iraq. That’s a whole other post.

So you can imagine my chagrin when we finally get on the phone with actual human from Wells Fargo and he has the thickest southern accent you have ever heard. I understood him but there was no way in hell that Noor  could make anything out of his elongated vowels, slurred words and distinct twang.

I know everyone has accents. I have one too. I say “dude” too much. I get that. But really? A thick southern drawl that only a third of American’s use? That’s who is manning our banking call centers?  Why?!!!  I think we would have gotten further with someone from India.

But then on top of the difficulty in understanding him, he was RUDE. I literally got the shakes from being so angry.  I don’t get angry that much but I wanted to crawl through her phone and punch the guy.

I started off the conversation explaining to him that I was her neighbor and I wanted to help translate. That was fine but he had to have her say her name and my name first for legal reasons. I understand this process because this is a fraud case and all precautions must be taken. I understand racial profiling. I admit I worried my neighbors were terrorists when I first met them too. It’s a common post 911 error.

What I don’t understand is why he had to be rude about it. He asked her to say her name over and over and over and every time he got more and more upset at her. You could hear the exasperation in his voice because she has a name that is not common. Her accent is thick and he probably didn’t have a clue how to spell what she was saying but she followed up quickly by spelling it, letter by letter. I understood her perfectly.  She knows the English alphabet and she spelled it out clearly. But apparently not clear enough for him. And every time I tried to chime in and clear up his confusion, he got mad at me for talking before she had spelled out my name for recording purposes.  So I had to sit there quietly while he belittled her. I was helpless.

It’s maddening. It happens all the time too. I don’t know how my neighbors get through each day, let alone maneuver through scams and fraud. It’s just one challenge after another. Just like when you are poor, things get exponentially more expensive. When you can’t speak English clearly, things get exponentially more difficult. She’s lost thousands of dollars because someone hacked her bank account. Thankfully, the bank has shut the account down but how many phone conversations will it take before she gets her money back, if ever?

The crazy southern-accented fool eventually hung up on us and thankfully the next woman who answered was a little more helpful and got an interpreter on the line but that was yet another cluster of confusion because the interpreter was from Saudi Arabia and he had his own set of accent problems when it came to understanding and interpreting. AND THEN as if things weren’t bad enough, the Wells Fargo employee had no idea who the interpreter was and didn’t believe that he was actually contracted by Wells Fargo to help clear things up. It was the Tower of Babble story all over again.

In the end I had to leave Noor to handle it on her own. These phone calls take up so much time and I had to go pick up Bug from school. But I just have to say I am overwhelmed by how difficult it is for immigrants. I want to stand up and say something, if only on this blog.  I know everyone has a story and I’ve judged the people on the other end of the phone line just as harshly as they are judging Noor but it has opened up my eyes.

This is my new rule for life:  Just because someone speaks with an accent or doesn’t understand English perfectly doesn’t mean they are stupid and should be treated unkindly.  I’m guilty of it too I’m sure but I am on my high horse now and I just want to punch the next person who treats Noor or Lubna or anyone one in their family with anything but kindness.

They’ve been through a lot to get here. They’ve spent their entire savings getting here. They are not illegal and they are not taking hand-outs. They deserve to be treated with respect.They are kind people. They are incredibly patient and resilient. I just want the best for them. If you meet someone like them and you are caught off guard by their dark skin or their thick accents, smile at them with your eyes and speak more slowly not more loudly. They are learning English as quickly as they can and they really want to be your friend.