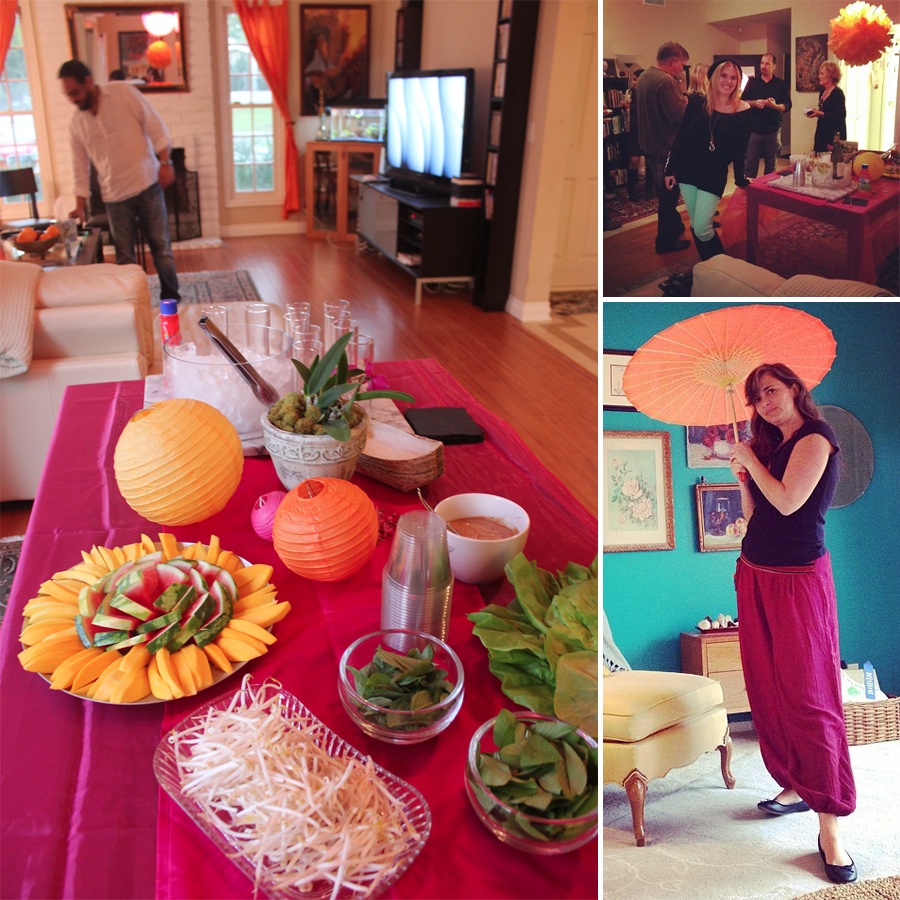 When I was in fourth grade my mom had a Tupperware® party and I handed out pre-printed, corporate, fill-in-the-blank Tupperware party invitations to my classmates at school. In hindsight I realize that this was pretty brave of me because I don’t remember being really super tight with any of my girlfriends AND this was also the year that boys started “going out” with girls. I was really really shy and the whole world seemed very scary to me back then so the fact that I actually had the guts to hand out invitations to people my own age in my class was a pretty big deal.

I think somewhere in my brain I thought that the word “party” meant it was cool and I completely spaced on the Tupperware part. Or maybe I really believed Tupperware was cool back then because my mom sold it and she was really funny when she stood up in front of a group and made jokes about using a fix-and-mix bowl as an umbrella.  She did have really cool wedge high heels back in those days. I remember them clearly.  I don’t remember loving Tupperware though.  I HATED my Tupperware lunch box with a PASSION!

Anyway, I guess I figured this party was going to be really fun and all my friends would hang out.  My mom would just sell Tupperware to the parents (who of course would come too) on the side or something. I don’t know. My brain was as fuzzy back then as it is now trying to remember it all.

As the day of the party loomed, my excitement grew. As I imagined all the fun we were going to have, I started to prepare in the only way I knew how: I punched some confetti, with my hole puncher. I punched all afternoon and saved it in a plastic bag. By the time I was done I had probably a cup or so of multicolored little punches. It was very exciting.

You can probably guess what happened. Seven o’clock rolled around and nobody came. I sat on the fireplace in my Sunday best holding my bag of confetti with worry.  Finally, one friend showed up. She wasn’t even a friend I had invited. She was a friend of a friend who’s mom really wanted some Tupperware. At this point I was so glad to see this girl. I couldn’t wait to show her my big bag of confetti.

While the moms talked Tupperware, we went in my room, opened up my big bag of confetti and threw it up in the air.

And that was that. There it was, all over my bedroom floor. The fun lasted for three seconds. Three seconds.  I think we scraped it all up and tried it again. But it still wasn’t much fun. I was sorely disappointed.

Ever since that party I have become that person who will invite 50 friends so that ten will show up. Seriously. 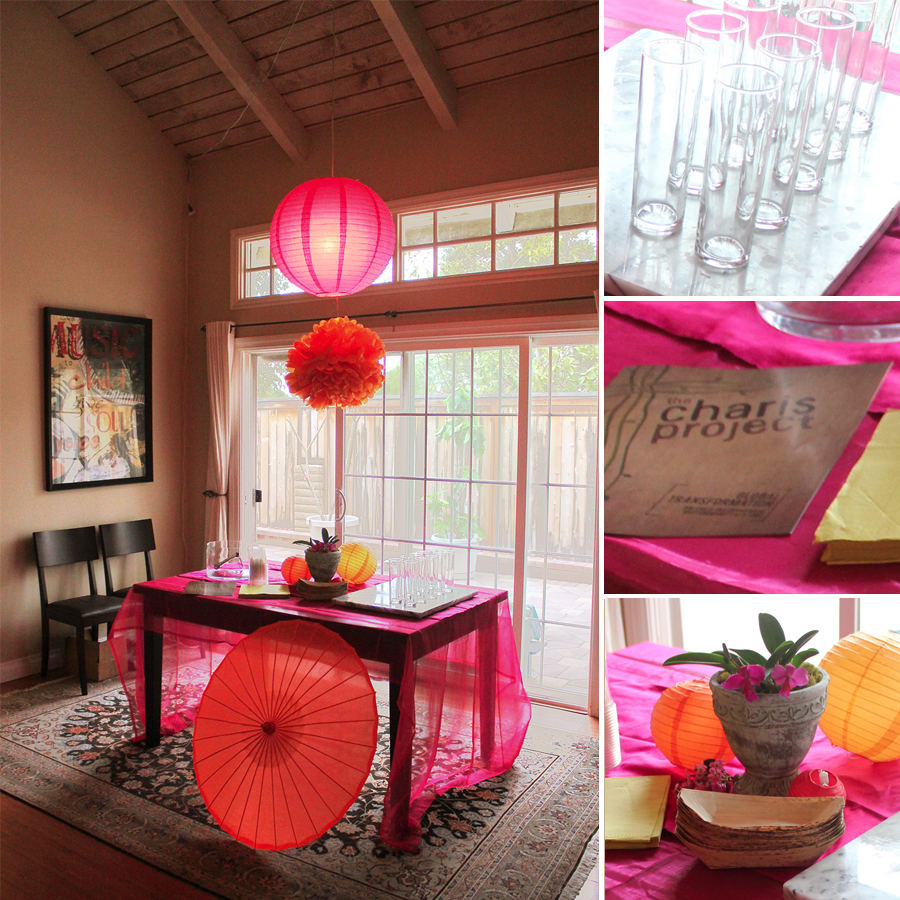 So you can imagine how I felt as my “Authentic Thai Dinner” for The Charis Project loomed and one by one every single one of my rsvp-ing friends called and said they couldn’t make it because of various reasons. Epic storm, flooding canyons, tight money situations, sickness, babysitters gone extinct… Everyone had great excuses. My inner fourth-grader felt like crying. 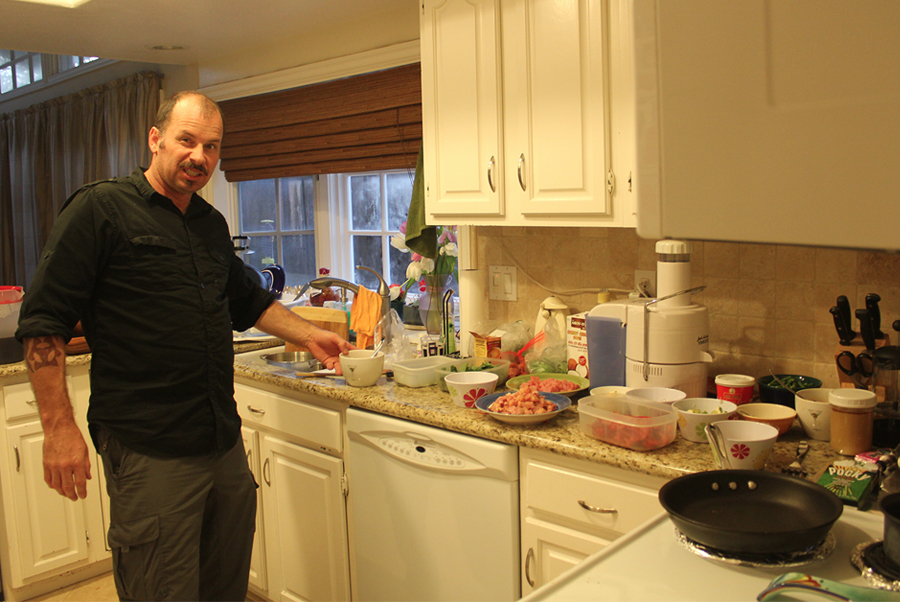 Here Aaron had come all the way from Thailand (for other reasons, not just this party, of course), we’d bought all this food (which added up even though it was from an Asian market and remarkably cheap) and it was going to just be me, my friend who let me borrow his amazing house and Aaron eating Thai food all by ourselves.

I wanted to go out into the garden and eat worms.

The storm sprinkled on, mirroring my mood.

And then somebody showed up! My old boss from that job I had over the summer at the invitation studio.  I think she felt sorry for me because she called her daughter, who just happened to be in the area, and she came too! Then two neighbors came by and another friend showed up with her eight-year-old daughter. So there we were, a small party of ten!

And you know, it was actually perfect. Everyone sat down together and we listened to Aaron’s talk about The Charis Project with undivided attention. I had hoped that the party would be big enough so that giving money to a charity wasn’t going to be the main emphasis. I wanted everyone to enjoy the delicious food that Aaron cooked (with gusto), and have fun and if they felt like opening up their hearts and checkbooks it would be passive, not in your face. I didn’t want anyone to feel guilted into giving money.

But then Aaron gave his talk and when you have to deal with children dying, you kind of get over your squeamishness about asking for money. He just put it out there. Thankfully, what they are doing in Thailand is pretty amazing and my friends really were interested. They asked what they could do to help and he just told them how it is: volunteering and money. That’s what will help the Charis Project.

I don’t know how much anyone gave. I personally didn’t give anything other than my time and the groceries and decorations…which was kind of a lot but I like doing this sort of thing. However, I learned a big lesson: Don’t have parties in the winter!

Just kidding! I mean, that is sort of true. But what I really learned is that I need to be okay with nobody showing up. It’s not a popularity contest. It’s a charity and I’m doing it because I believe in it.  I also learned another tidbit from Aaron. He said that the best way to get people to show up is to ask them to bring something specific. A table cloth, a special dish…something that they’d really feel bad about if they didn’t come.

So don’t be surprised if I ask you to bring the main dish next time I have a party!