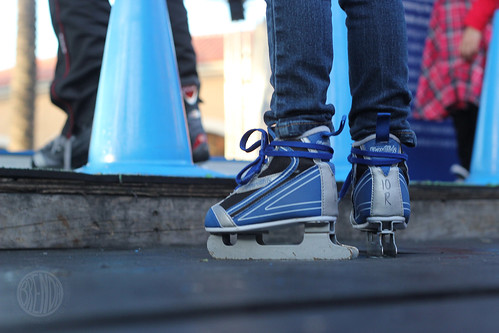 Yesterday was not very Valentinetastic for me but then I didn’t really expect it to be. I am, afterall, decidedly single. Bug, however, had a super valentine-tastic day. She got flowers from her dad AND we went ice skating! Wooo Hooo! High fives all around! It was pretty cool if I do say so myself. 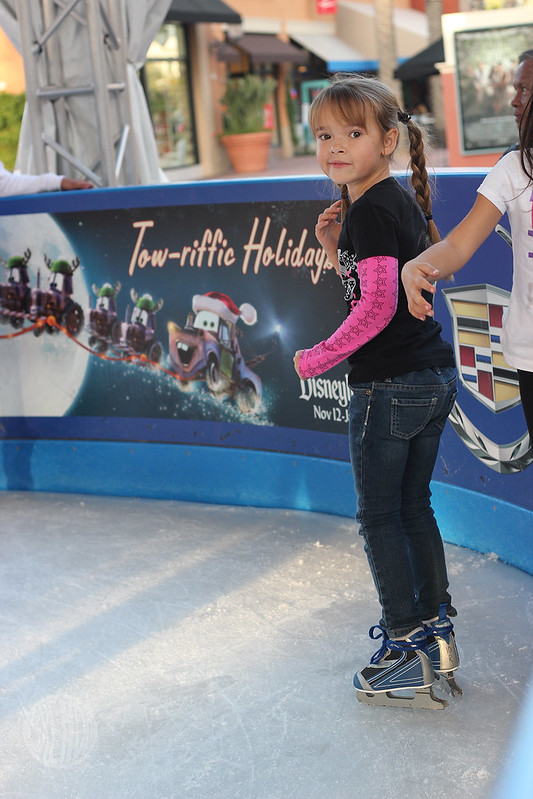 The apartment complex we live in emailed out free tickets for one session on Valentine’s Day. I figured we didn’t really have anything much better to do and the sessions are usually quite expensive so why not? The rink is in a nearby outdoor mall and quite small but it’s still charming. And they play music loud so Bug was down with it in spades. 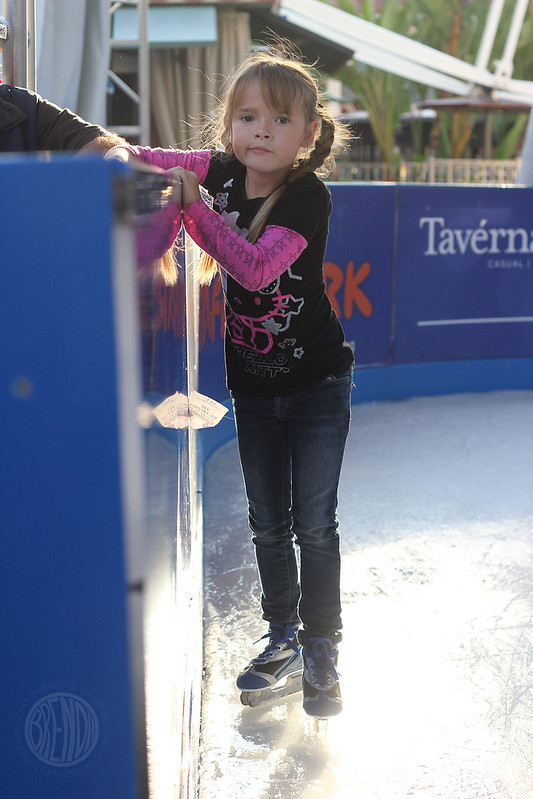 Bug started out hugging the wall all the way around. The ice was really slippery and quite cut up from all the other people skating. I tried a few rounds myself and even though I can roller skate decently, I had to go back and change skates to a smaller size. I just felt so wobbly and scared that I was going to fall and break something. 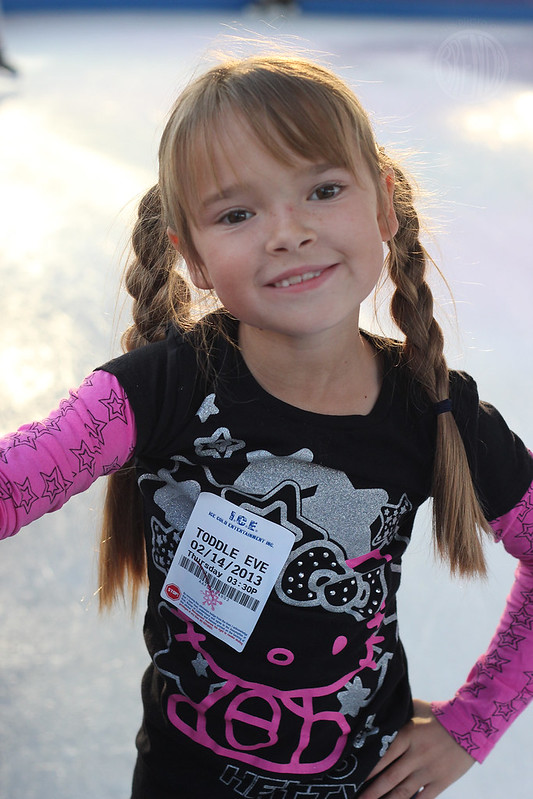 It’s a whole new ballgame of worries when you’re 40 and you have crappy medical insurance with a super-high deductible. My Dad broke his arm when I was a baby from ice skating so I always have that in the back of my mind. The smaller skates helped a lot but after a half hour of skid-sliding around, I thought I better sit it out and cut my losses. So I grabbed my camera and tried to capture the fun that Bug was having instead. 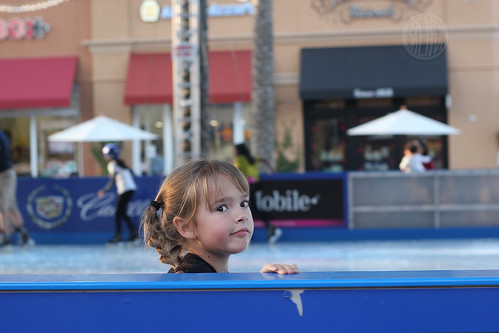 Don’t let the half smile-smirk fool you. She was loving it. 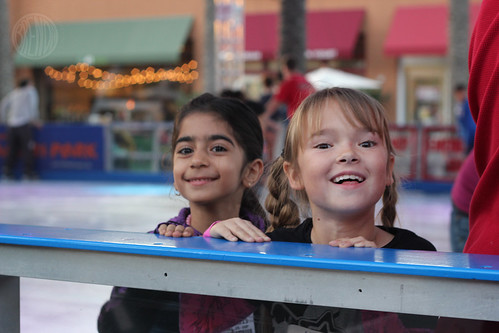 Things got exponentially better when her friend showed up. They are both so tiny and mighty with their personalities that are bigger than they are. They trekked and slid around that little rink over and over and over. They got pretty good at it and soon were doing their little shuffle-skate moves in the middle, far away from the floundering beginners at the wall. 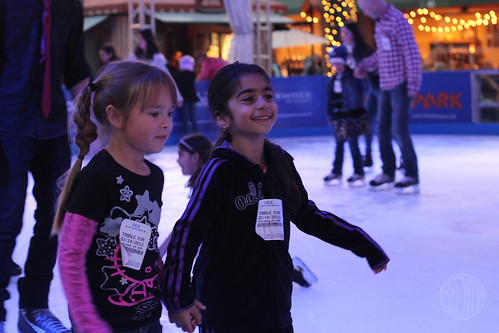 Three hours passed and they were still going strong.

Here’s a little video of Bug doing her thing:

Not quite skating but getting around none the less.

The interesting part for me was that I forgot my phone at home. In the olden golden days this would be no big deal but just like everybody else on this planet these days, I have gotten quite addicted to all the fun aps and social media connections that I can check into every other minute. Being forced to sit there and people-watch hour after hour was really mind-opening. 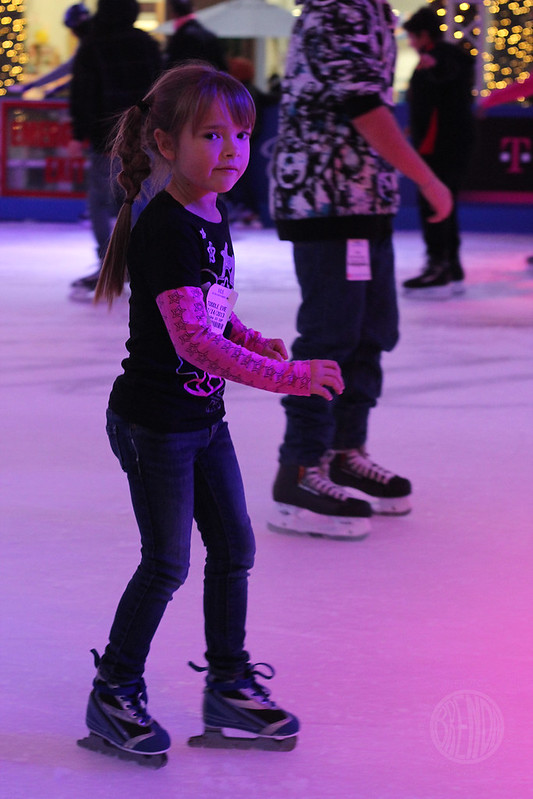 I apologize for opening up the dark side of my life on this post but you know it’s been there lurking. You’ve probably been wondering how I’m doing when I don’t blog. Among many other reasons (like being busy or boring or lazy…) I’ve been going through some “stuff” lately. Every time I find myself in a low place and tears start to flow, I have to remind myself that there is a giant iceberg of hurt inside me and it’s going to take a long long time for all that to melt.

I always think I’m so strong and I can just buck up and get over things in a snap but I’m fooling myself. You don’t get over stuff in a snap. You just think you do and then it creeps back in disguised as some other disappointment and before you know it the dam breaks and you’re crying buckets. Not over the small disappointment but over the years of disappointment. Anyway. That is too sad and too depressing to wallow in. I just wanted to say it because if I think of the iceberg melting, it makes me think that maybe I’m making progress. That maybe someday I’ll melt this damn thing.

Sitting there watching all the Valentine couples skating around and nearly falling on their cute little I’m-out-on-romantic-date-outfitted butts was a good exercise for me. I wasn’t that jealous of them. They were funny and silly and they made me smile. I didn’t have my phone or food or Netflix to escape into so I just sat there and thought about where I am in my life and where I want to be and how I want to be a better mom to the one and only most important person in my life. I could go into that more but this post needs to wrap up. 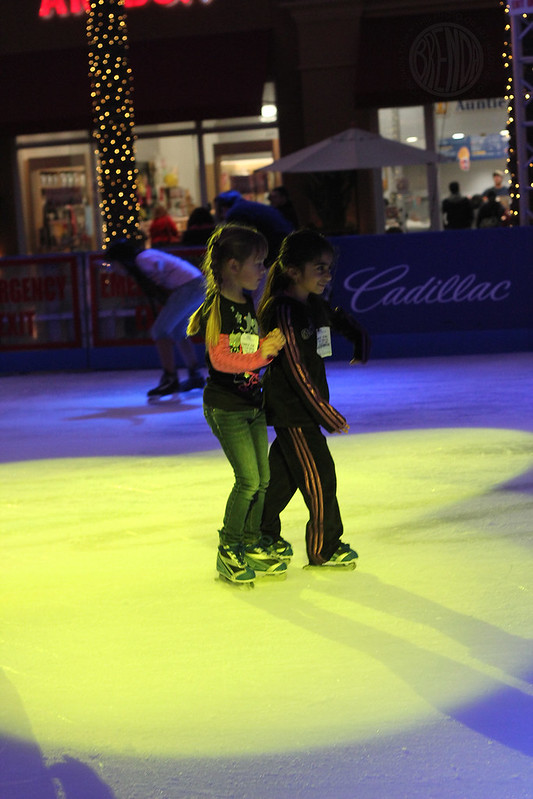 So this morning when Bug woke up and could hardly move her legs because they were so sore from skating, I had to smile with pity. Poor thing. They had had a Jump Rope For Heart jump-roping session at her school earlier on Valentines and then adding all that skating really did her in. So it’s no wonder my brain is a little sore. Ice melting is hard work too.