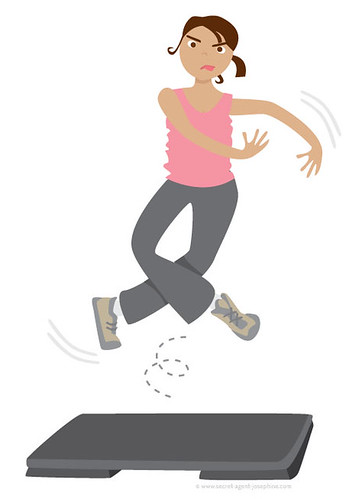 I never told you guys about how I joined a gym. I was going to but then my Grandpa died and the nieces came to visit and it got shelved. It’s probably a good thing I waited though because my opinion of the whole place has changed. On a daily basis. You could say I have a love/hate relationship with the gym.

When I first joined they set me up with a free complimentary session with a personal trainer. I said, Bring it on! I love personal trainers! I used to have one back in the day when I worked at the junk mail factory (an awesome company perk) and I loved it. Working out always goes better when you have someone else nagging you to do lunges correctly.

It turns out the free complimentary session at the new gym was more of a hard sell in disguise for their bazungo crazy expensive personal trainer program. What a crock. First the guy broke me down and pretty much made me eat dirt and admit that I was in much worse shape than I realized. He had me lifting all kinds of crazy weight in super slow sets that had my knees shivering like a little girl.

I know this method of working out is usually effective so of course I let him abuse me. I embraced the pain. But then the machines were so complicated. I was doing leg lifts backwards on something you usually use for your abs and something swung around and smashed my index finger in a way it should not have. It hurt. Bad. I still have a blue nail to prove it.

Blargin’ Trainer Guy. I hate him.

After about forty-five minutes of brutal humbling, we headed over to his desk to “talk about my options.” I admit it. I was sold. Not because I loved the work-out but he pretty much had me convinced that there was no other way to get in shape other than to hire him to whip me. My future looked pretty bleak. Even with his program it would probably take me six months to a year to lose the twenty pounds I need to lose. And let me tell you, those pounds were the ugliest pounds I’ve ever looked at. I’m sure he had me working out in front of a mirror for that exact desired effect.

We talked and talked. He complimented me on my knowledge. I learned about his struggle with MS and how he holds some kind of trophy belt for being the best trainer in all of California. It was a happy little talk and then right as the short hand reached the hour mark, he slid his laminated rates page across the desk.

SIXTY DOLLARS A SESSION!!!! Plus a hundred-and-something-or-other for initiation.

I’m not made of money. I can’t afford sixty dollars a week. Is this guy crazy? I live in a depressed town where everyone is on welfare. How do people afford this?!! Do their insurance companies cover it? Does the government offer programs for this? I saw plenty of people working out with trainers. They must be coming up with the money somehow. How do they do it? I pretty much emptied my checking account to join the gym in the first place.

Then the worst thing happened. The ugly cry came over my face. I didn’t mean it to. I never cry in public, well hardly ever. I hid under my bangs but once it started I couldn’t stop it. I guess I was a little more stressed out than I realized. Work had been tricky, money has been tight, my house seemed like it would never stay clean (thanks to my brother who was making it his personal mission to mess it up), everybody thinks I’m uptight because I’m a control freak about my house, Bug didn’t like their dumb kid’s club daycare and well, the whole navigating a dissolving marriage thing…you know, maybe it was just too much.

I put my hands over my eyes, got up from his desk and walked backwards. I hid behind a column that was near his desk and then just split. I didn’t even try to explain myself. What could I say? This guy doesn’t know half of what is going on in my life. Who knows, maybe he makes people cry on a regular basis. I’m sure his services are well worth $60 an hour. I charge more than that for what I do. But you just can’t spend money you don’t have.

So that was that. I haven’t talked to him since. I see him from time to time and I’ve been meaning to stop and apologize but I just haven’t gotten the guts up. He has my phone number, he could have called me but I think he’d rather wash his hands of a weepy over-weight middle-aged frump monster. I don’t know. I’m moving on.

I went home and thought a lot about the whole experience. In the end I decided that this guy doesn’t know me. He has no idea how I work out and how much willpower I have. I can get in shape without him. It might take me longer but I’m not a failure before I even start.

So far I’ve gone to the gym at least two times every week for about a month, often more. It’s too early to be patting myself on the back but I feel pretty good about it. I might not ever lose those twenty pounds. I’m okay with that. I just want to be healthy and not hate myself when I catch a glimpse of myself in the mirror.

Figuring out a good routine has been a little more challenging. I hate to go to the gym in the morning because that’s my peak creative time and I really like to devote my overly-caffeinated brain cells to my work BUT it seems like if I don’t go work out in the morning it doesn’t happen at all. I’ve tested this over and over for years. So I work out in the morning and it evens out because on those days I seem to have more overall energy anyway and I can work longer at night.

Finding a class that works for me in the morning is a whole other issue. I tried their yoga class but Barbie the Yoga Instructor drove me nuts. She was bendy alright but when she started swinging herself by her wrists and flirting with the very interested jock in the front row I got tired of it real quick. Which is too bad too because I love yoga.

I tried water-aerobics and loved it. It’s fun splashing around in a salt water pool with a bunch of grandmas. I felt like a super star when I could run under water and kick all their butts. Not that I was showing off or anything but sometimes it’s nice to not be the slow poke in the back of the class for a change. I even took my dad to a class. He loved it too. But the time slot was a bit late in the day so I’ve not really been going regularly.

Then I tried step aerobics. It’s perfect for me. It’s just complicated enough that I’m constantly confused and stepping backwards when I should be stepping frontwards. One day I forgot to drink my coffee before class and that day did not go well at all. I couldn’t get the hang of anything. It’s funny because while I have pretty good rhythm and love to dance, I’m terrible at taking instruction.

When the teachers says exit left, I exit right. Crossovers and step-behind grapevine-thingys have me tripping over my own feet. I’m a clutz like no other. But at the end of the work-out, I am exhausted and I haven’t thought one thought about how uncomfortable I’ve been. My brain is so tired from trying to keep up with the complicated routine that it has no idea that my body is sweating bullets. I love it. The teacher is excellent too. We stretch and use weights and everyday I am sore in the good way.

So I guess I could say I love the gym now. We’ll see how it goes.