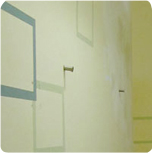 Manhattan Nest is getting a new nest in Brooklyn. (He’s moving.) I don’t know if you guys already read this guy. You probably do. I’m probably pointing out the next dooce and you’re all rolling your eyes at me. But if you haven’t and you’re as obsessed with fixing up your apartment/house as I am, then you will probably laugh your head off at this post. An example:

“…the overlapping-quadrilateral scheme seen here is based on a technique borrowed from the ancient Egyptians, intended to confuse bandits who sought to ransack the royal pyramids. It was thought that the squares would cause confusion by inducing a dizzy spell, resulting in either an epileptic seizure or a lasting case of vertigo. True facts, people. Well, I’m guessing they’re true since why the f— else would somebody do something like that to a bunch of innocent walls?“