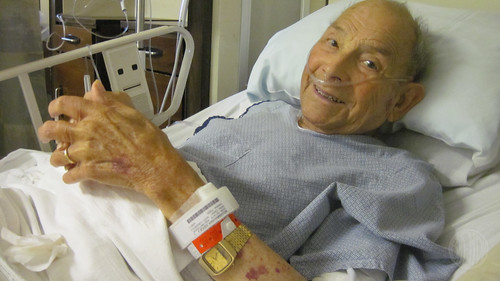 My ninety-two-year-old grandpa fell and broke his hip last week. He was just out walking/hobbling in the garden area with one of the nurses from the assisted-living home that he resides in and he took a fall. Nobody knows why exactly but unfortunately there was a good bit of time between his fall in the afternoon and when he was actually taken to the hospital via an ambulance.

My mom stayed with him all night in the ER waiting for him to be admitted. He was finally admitted and put on pain-killers sometime in the wee hours of the morning. I’m sure it was horrible for him. My mom called me several times and I could hear crazy people wailing in the background. Somebody was drunk, somebody else over-dosed on drugs. It was a crazy night in the ER like usual. My poor old grandpa.

When I went to see my grandpa the next day in the hospital, he was pretty high on morphine. But he’s been slipping in and out of dementia for a while now. Last week I went to visit him and he was in tears trying to tell me a story that was so important it could change the world, he said. It took him forever to get the story out and when he did it wasn’t really a story at all. But I’m going to share it here because I promised him I would.

He has this painting (or photograph, I’m not sure. It’s a reprint) on the wall of an old man praying over bread. It’s a very popular picture and has been around for ages. (Google tells me it was taken by a photographer in Minnesota in 1912). My grandpa has talked about this picture many times before but lately it’s taken a new twist.

When he was in the service back during World War II, he was in London and had dinner with a man named Old Brother Ball who looked exactly like the man in the picture. Same hair, same clothes, same bread, the book was a bible and in the bowl was something he called mutton which was like lard. My grandpa remembers having dinner with Brother Ball and he took a knife and spread the mutton on his bread. Grandpa says the mutton was horrible tasting and turned his stomach. He smacks his lips in disgust and tells me that he can still taste it to this day. “Disgusting stuff.”

Anyway, my grandpa is now convinced that this picture is actually of Old Brother Ball and nobody in the world knows this. He desperately wants to tell the world that the picture isn’t a mystery anymore. The man’s name is Brother Ball and he lives in London in a town called Rickenberry (I didn’t write it down so I have to double check this because I have no idea what town he was talking about.)

Before he always told the story as if the man in the picture looked a lot like his old friend but now he’s convinced it is Old Brother Ball and it’s my job to tell as many people as I can. Maybe we could even make some money off the story, he says, which is just like him always trying to find a way to get rich quick (it runs in the family). Over and over he frets, Do you think we can do this? It’s such a big story. We have so little time. Can you print it? How many copies can you make?

In the hospital he must have seen on television that there was a ballgame this weekend and he was adament that I get the story printed in the newspaper and hand deliver it to the ball game attendees. I kept telling him over and over that I could put it on my website and thousands of people would read his story. (I exaggerated slightly for his comfort.) He’d pat my hand and thank me and then one minute later he’d start over again.

It was crazy-making. I started putting my story-telling skills to work and told him big fat yarns about how I would print the story two-up at Kinkos and then stay up all night long rolling the half-sheet flyers inside newspapers. Maybe I’d even set up a table and hand out free cups of coffee with the newspapers. His story would get out I assured him. I’m sure his hospital roommate was thoroughly amused/confused about what was going on.

It was so hard. I wanted to comfort him but the distress just wouldn’t go away. I’d convince him that his story would get out and he’d calm for a few minutes and then start up all over again. Do you really think you can do it? It’s so important. We have so little time. Maybe you better go and get started right now.

So finally I did leave. I told him I’d come back in the morning and show him the printed story. I figured I’d just print out this blog post and hope he didn’t have his glasses on, which have been lost for a few days anyway. I don’t know if he really knows how much time is passing. It seems like he is in a perpetual state of the last five minutes.

The good news is he had hip surgery last night and he came out of it like a champ. My dad said he was more lucid than ever. He knew who was president. He wasn’t talking about his story or the ballgame at all. He was happy to see my dad and just wanted to get some rest and see everybody later. So who knows, maybe he’s got a few more years left in him. 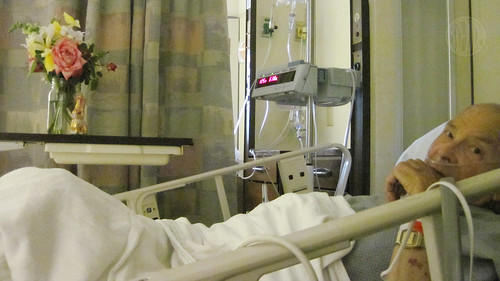 I just hope they’re good years. I’m so happy to have him still with us. I love him so much but I don’t know how long I can go on making up stories about making copies at Kinkos and handing them out at ballgames. But I’ll do it because someday somebody is probably going to do it for me. Or at least I hope so.