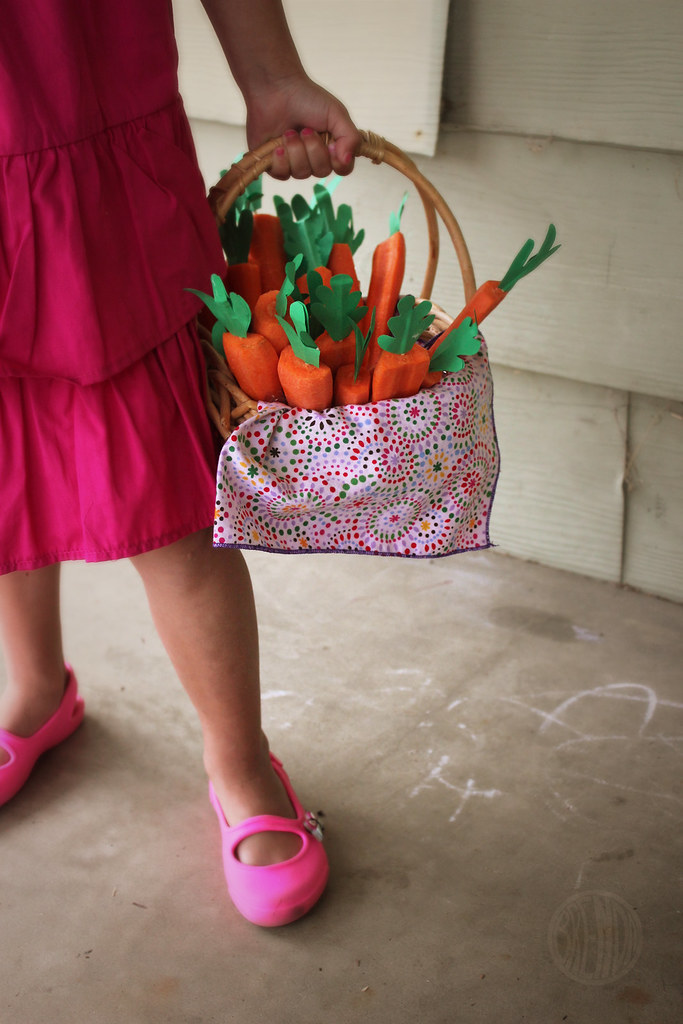 It started because I signed up to bring “veggies” to Bug’s preschool Easter Party. There’s always a list on her classroom door asking parents to participate with these parties and the cookies section is always taken by some other early-bird eager-beaver parent. Who is that parent anyway? I thought it would be super fun to make homemade sugar cookies and decorate them with hot pink icing but noooo, I’m stuck with veggies.

That’s okay. I’m creative. I can come up with something fun with vegetables other than the pre-cut plastic tray you buy at the grocery store.

For Valentine’s Day, Bug and I arranged carrots and celery and tiny grape tomatoes in the shape of a heart. I think it went over well. I never really get much of a response from the teachers at her school when I drop things off. I think they’ve all been-there-done-that a thousand years ago and my earnestness wearies them. But the vegetables were mostly eaten when I went to go pick up the plate.

So off I went to Walmart, my latest least favorite grocery store, to pick up some vegetables. I thought I could find something fun and creative, like say maybe I could carve an easter basket out of a jícama or something.

Who am I kidding!!!! Walmart doesn’t even know what a jícama is! They might grow them out here in the sticks but they do not sell them. Why? Because nobody is fool enough to buy weird funky food that doesn’t come in a box with cheese all over it and microwave directions. Okay. Sorry. I’m just a little bit bitter. They probably do sell them, they were just out of them like they were out of everything else. Can you tell I hate Walmart with a passion now that I live out here in the sticks? They are the evil empire who has put all the mom-and-pop stores out of business and if they didn’t carry cute white Jackie-O sunglasses for $10 I don’t know why I would ever shop there.

Oh, right because they carry Tassimo T-discs for eight dollars when everybody else sells them for ten. Ugh.

Anyway, I was thoroughly disgusted with Walmart’s produce selection. They didn’t have any jícama, their asparagus were dried out and moldy on the ends and their avocados looked like they were two weeks old. I walked around the two aisles that made up the produce section four times and I couldn’t find anything to be creative with for Bug’s Easter Party. Everything was old and awful and sometimes even rotten. I was just about to give up and go to another store when I got a brilliant idea.

Why not just take carrots and only carrots? Kids love long whole carrots when all they ever get are the small “baby carrots” that are actually regular carrots whittled down and marinated in chlorine. I know I do. There’s nothing more fun that munching on a great big carrot. They just taste more like garden to me.

Bug especially loves them but when I showed her the two big bags I picked up at Walmart she was sorely disappointed. “They don’t have their tops, Mom!” Of course. I should have known. Carrots need their tops. We’ve been spoiled by farmer’s markets.

So I devised a plan. Bwa ha ha ha! I’ll make carrot tops. They’ll be just like cupcake toppers except without the cake and frosting! 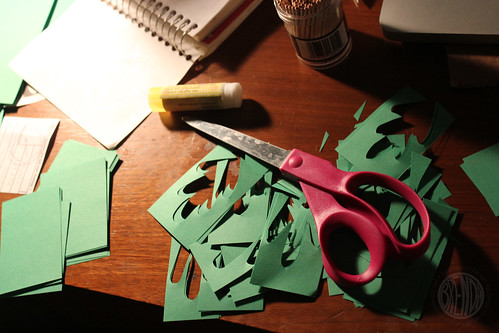 I cut out a bunch of paper leaves (doubled), stuck a toothpick in between the two pieces and then stuck them together with a quick swipe of a glue stick. It was a brilliant idea! Never mind that I didn’t get the after-dinner dishes done and Bug went to bed an hour an a half late, she’s going to have the BEST Easter Party veggie contribution ever. 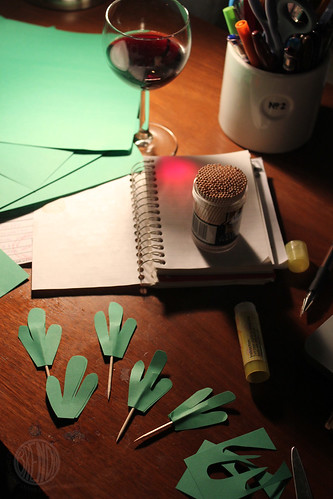 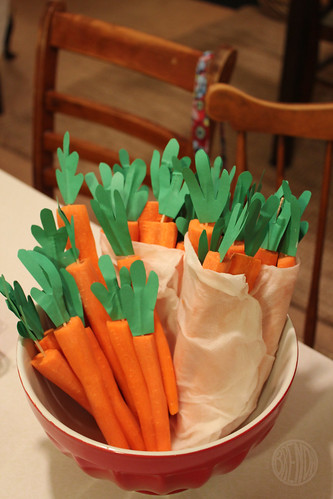 Some wine may have been imbibed during my mad, late-night, carrot-topping. 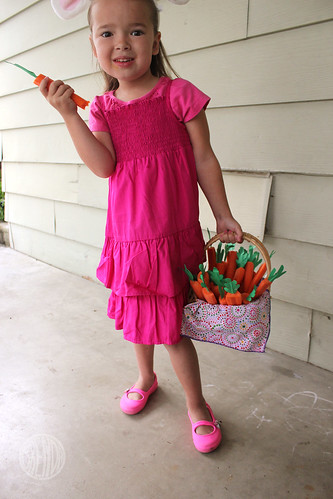 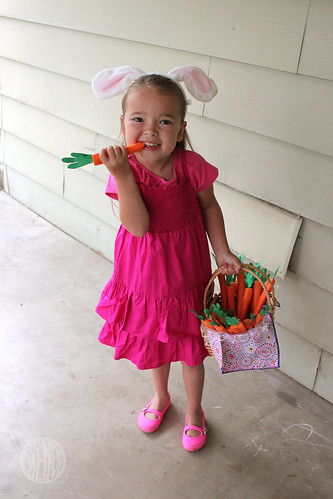 But it was worth it. Bug loved the carrots. She ate two whole carrots before bed and then refused a poptart this morning in favor of another carrot. I was feeling bad about sending her off to school with such a limited breakfast but then I thought about all the cupcakes and cookies she’d be eating at the Easter Party and decided that maybe a carrot was a good start to the day. She couldn’t wait to deliver her carrots to all her friends.

Our car ride conversation this morning:

“Mom, I wish our house was made out of carrots.”

“Because then we’d have a carrot phone. People could call us on it and then we’d deliver carrots to them in our carrot car.”

I think my job is done here. I just hope the other kids are as excited about the carrots as Bug is. Her teachers didn’t seem to be when I dropped them off this morning but then again, they’ve probably seen this before a thousand times.