I figured I might as well write a post while I wait for the paint to dry on my latest craft project. Unfortunately, this project is not one I’m going to blog so you’ll just have to wonder until the end of time what paint might be drying but I can share that I’m working on an April Fool’s craft that should post this Thursday. I haven’t done it yet but it seems pretty cool in my head. 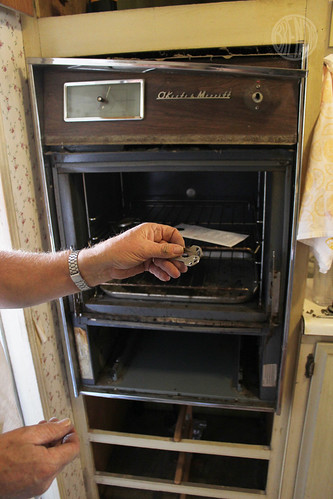 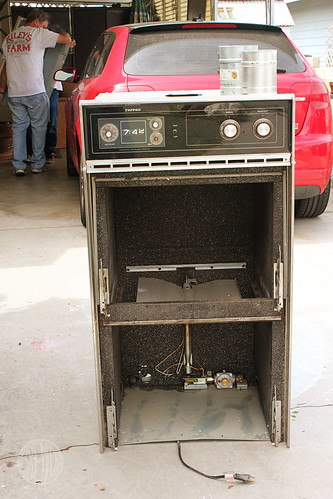 So! I almost got an oven this last week. That would have been exciting. The oven here has been broken since I moved in. The gas guy came out to fix it and sent us off on a wild goose chase for a 1970’s thermal couple that doesn’t exist anymore because they don’t make them anymore. He did say I could sell this old Okeefe & Merritt for a couple thousand dollars. I wish that was true. Does anybody know anybody who collects old ovens like this (the one on the left)? It’s really cool and green! It’s also very narrow but I didn’t care. A narrow oven is better than no oven.

But as things always go, the exhaust pipes for the new oven didn’t quite fit so now I have a new oven (which is actually an old one from my mom’s old house) hole in my house that is not quite hooked up. It’s okay. I’ve waited this long, I can wait a bit longer. My dad says he can fix it when he has home time again which might be as soon as this coming weekend. Woot! If it really happens, I’m sure I’ll be posting all kinds of pictures of me making lemon bars! You don’t know how many times I’ve looked at my lemon tree wistfully thinking of all the lemon things I could bake if I just had an oven! 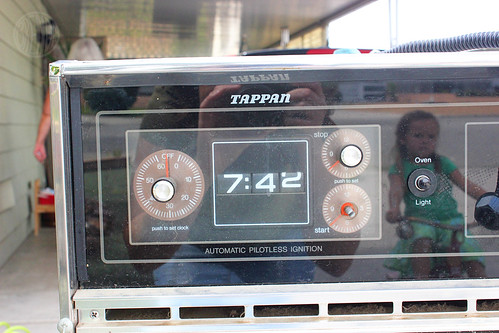 The new old oven is kinda cool and funky too. It even has a clock in it that all the cool cats are making into screen savers these days. I don’t care. I just want it to BAKE!! I tried making cornbread in my mom’s toaster oven a while back. It did not work. The top burned and the middle was raw. There might be a way if I just adjust the temperature and time variables. 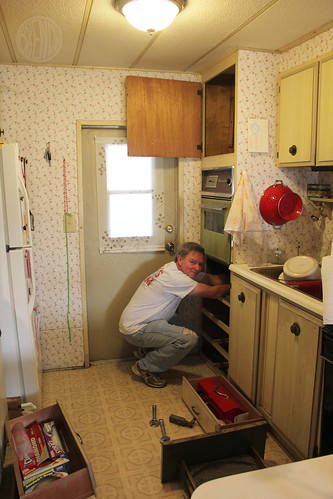 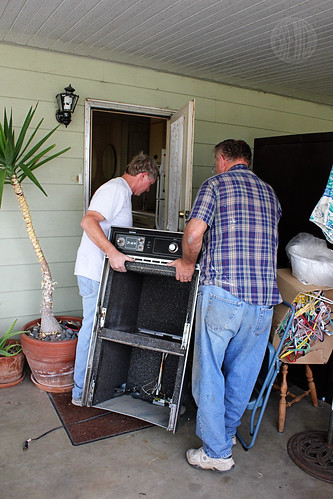 The coolest thing is that my dad was home. I wish he was home every weekend, but you know how it goes. He’s a long haul trucker and the more you drive the more money you make. So them’s the breaks. 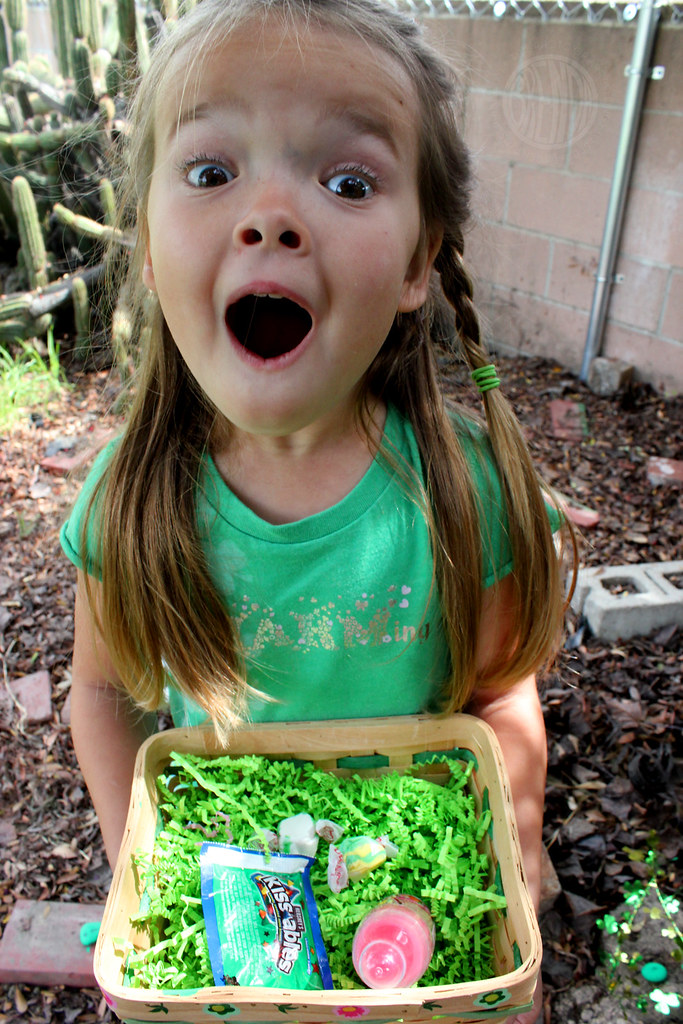 Hmmm… what else is new? St. Patricks Day was pretty fun. Bug wore green from head to toe which brought back old memories. I whipped up a really quick Leprechaun treasure hunt in the backyard for her. It wasn’t that special really but she thought it was fun. I just painted some rocks green and then put them out strategically so she could follow a trail to an old Easter Basket filled with some leftover green taffy I already had on hand. When she questioned the item’s familiarity, I told her the Leprechauns are probably just like Santa Claus and they like to borrow stuff from us like wrapping paper and old baskets and things. They’re very resourceful, those seasonal characters. She seemed to buy it but I think that explanation won’t last much longer. 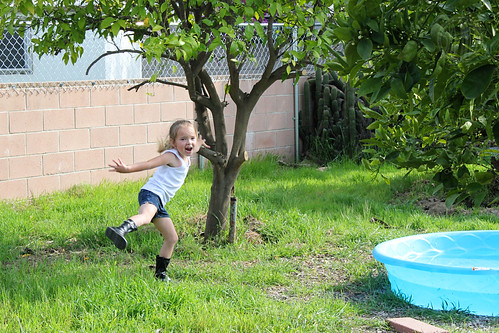 Speaking of Bug and her many outfits, I have found a solution for the constant pink. You might recall that she will only wear a particular shade of hot pink and sometimes I feel like whipping out the pantone book and telling everyone who gives her gifts to match it to a number (Pantone 233 if you’re curious). It’s that bad. But sometimes she likes to play act certain characters. Her favorites are Sleeping Beauty and Barbie, of course. Occasionally she will dress up as me and put together an outfit that looks amazingly like mine. 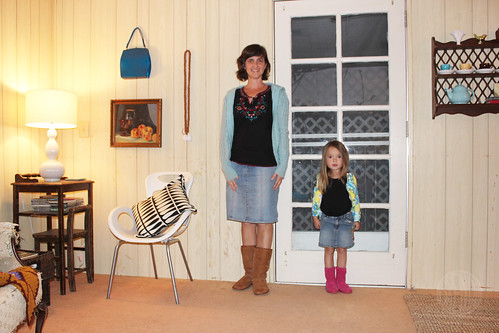 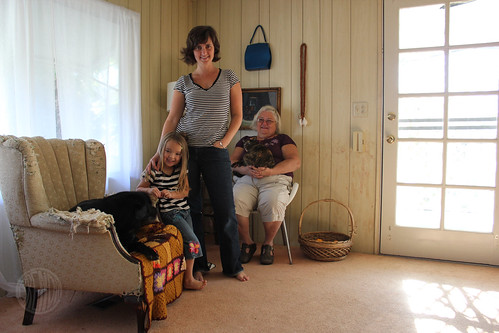 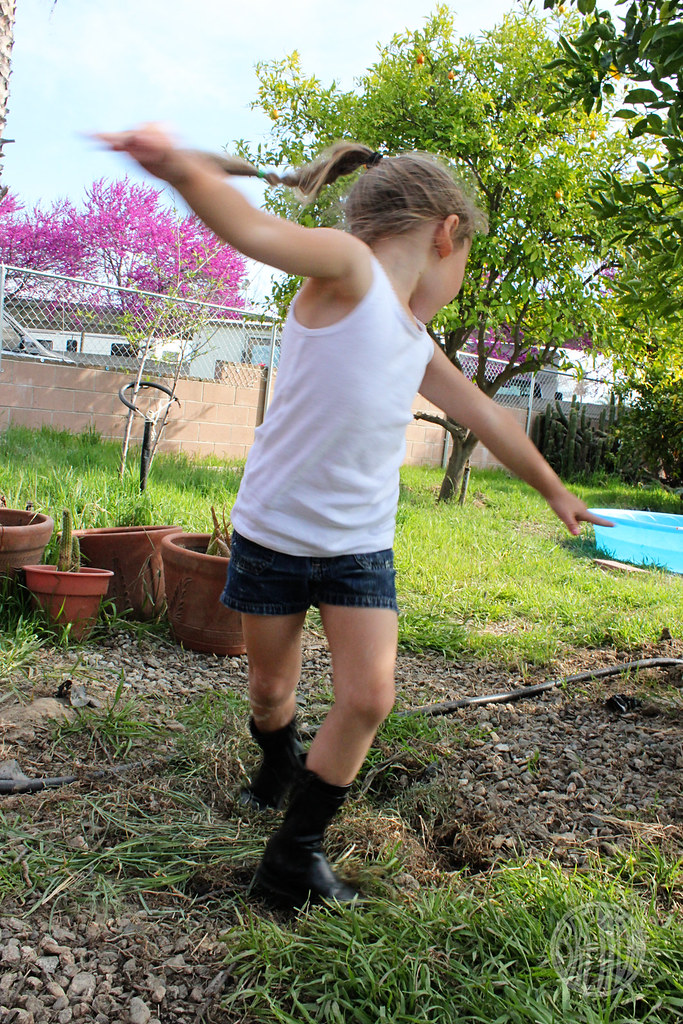 Recently we have been having wars about how she wants her hair done. She always wants two braids at the top of her head pulled back because that’s how Barbie does her hair, apparently. That’s all fine and everything but her long long hair gets sticky and tangled and all I ever want to do is chop it all off or put it in a high-up pony tail. Her dad doesn’t want her to cut her hair at all, which I can kind of relate to since I too had really long hair as a child, so that’s not an option. A pony tail is the obvious solution but I guess I just haven’t put enough Barbies in her path wearing a pony tail.

I thought I’d take a different track so I showed her a video of Lara Croft kicking butt and it worked like a charm. Now she wears boots and shorts and wants her hair up all the time. The back yard has become a tomb and she’s always hunting for treasure. Whatever works, I say. Kids are funny and sometimes require parents to be even funnier. 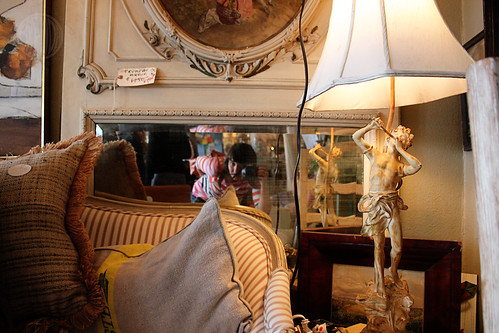 This weekend while Bug hung out with her dad, I tagged along with my friend Deb to a cool antique store. Except it was sort of like a cross between a thrift store and an antique store and they had all kinds of “junk” out on the sidewalk for super cheap. I wasn’t going to buy anything but the ladies working there were so nice and kept pawning things off onto me. “Here buy this purse, it looks so nice on you! What a great shape!” “You like that chair? I’ll sell you both of them for twenty bucks!” etc etc… it was kind of fun and silly. I would love to own a shop like that and sit around with a bunch of girlfriends drinking coffee and encouraging suckers to buy stuff. 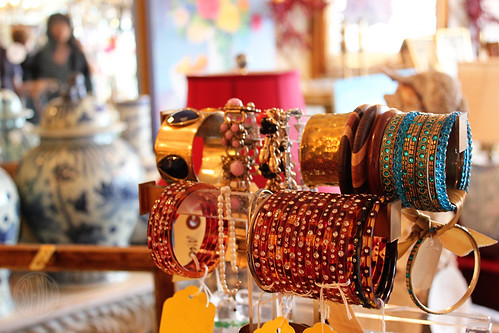 I could find all kinds of old forgotten gems (aka junk) out in the sticks where people don’t know what they have and then sell them for twice the price at the beach. Now if someone could just rent me a store front for next to nothing. That would be the thing to do! I could have a little espresso machine in the back and probably do graphic design on the side. I’m not sure where Bug would hang out though…Lara Croft kicks might not go so well with glass lamps and fine china. But it’s a nice day dream. 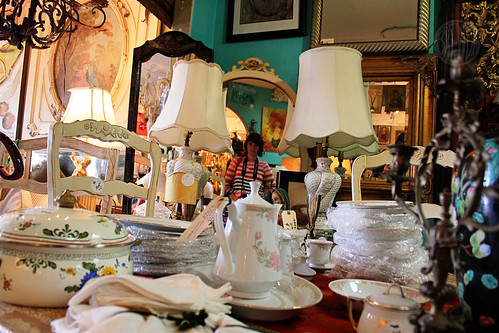 It was a great place to take 7days shots, there were mirrors everywhere! Which by the way brings me to how much I hate my new haircut. Every shot I take of myself, I hate. I guess this is just part of getting older but please tell me next time I get a haircut that I’m NEVER allowed to have layers above my ears again. It’s taking forever to grow out. I guess you can’t really tell in these photos, which is intentional. My delete key sees way more photos than anyone these days. 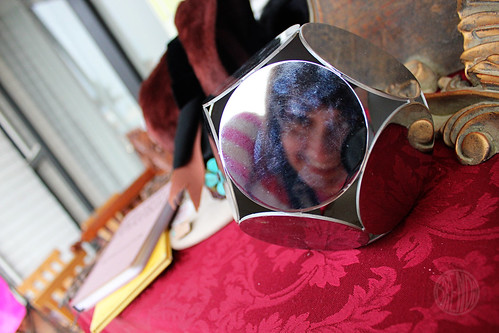 I found my shot and bought this silly mirror thing for five bucks. It’s pretty cool I think.