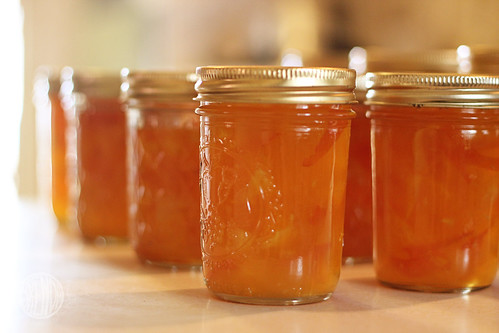 Well, I finally did it. I finally made marmalade! Woo hoo!!! This has been on my big list of things I want to do before I die. Of course, I should probably qualify my previous statement and say that my mom made marmalade in my kitchen while I hovered, took notes and photographed. But I totally paid attention and then I cleaned up the kitchen afterwards which counts for many many points, right? Do you know how sticky citrus can make a floor? Very.

Anyway, I’m super confident I could make my own batch of marmalade all by myself next time if I wanted to. That’s enough for me. 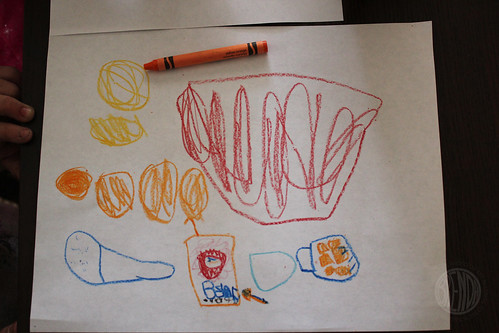 Bug was kind enough to copy the recipe down for you. I’ll transcribe it for you below. 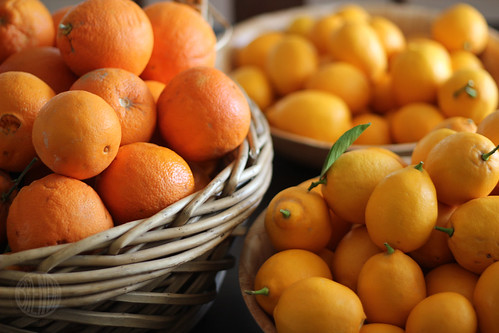 4 oranges
2 lemons
6 cups of sugar
2 1/2 cups water
1/8 tsp baking soda
Sure Gel pectin (you can use the other brand just make sure you follow their directions)
sterile jars (enough to fit 4 cups of fruit, you pick the size. We used two big ones and four little ones.) 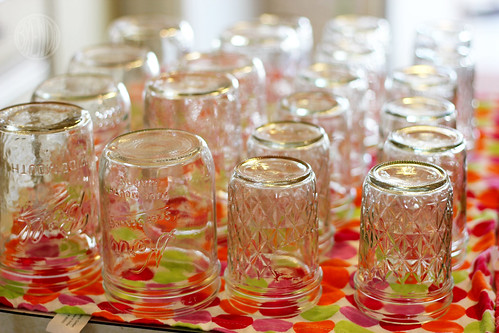 First, you’ll want to wash your oranges and lemons really well. Especially if you’re like us and they’ve been sitting in the backyard collecting dirt and bird crap—I mean sitting there being perfectly chemical-free and organic!

When they’re all nice and pretty, take a vegetable peeler (yep, a plain old potato peeler) and skin the zest layer off. My mom says back in the olden days they used a knife and it was a big pain in the neck. Use a peeler, it’s super easy! When you’re done with that, chop up the rind into small pieces. We liked small thin rectangles for some reason. 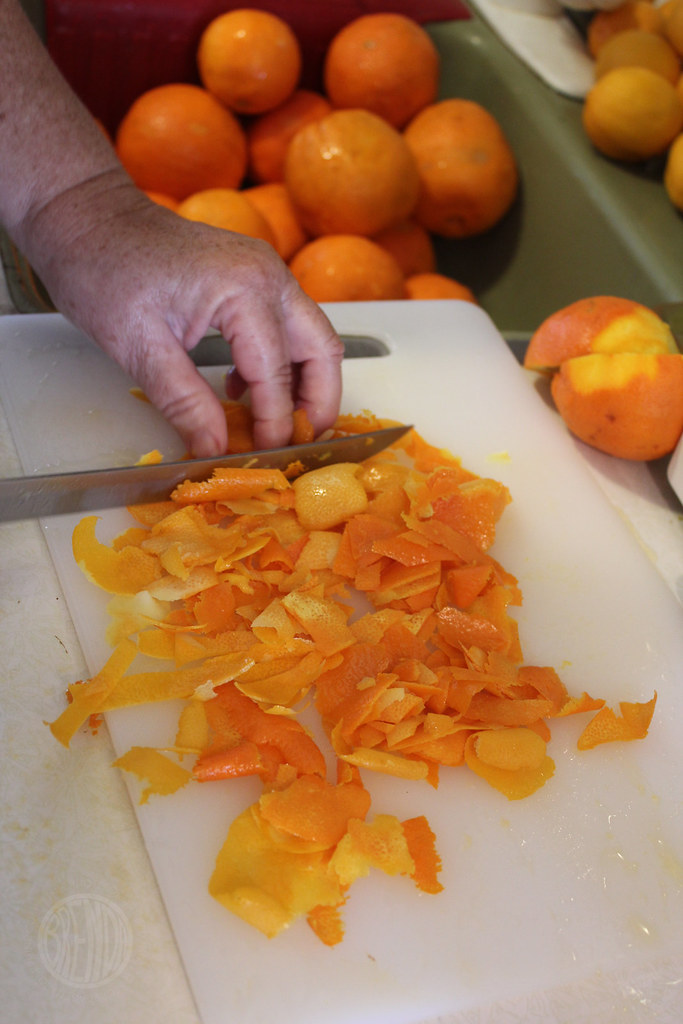 You’ll have to forgive my mom’s hands for not being model-esque. Them’s workin’ hands, riddled with arthritis. But they still work! Next, peel and discard the pith part of the oranges and lemons by hand. 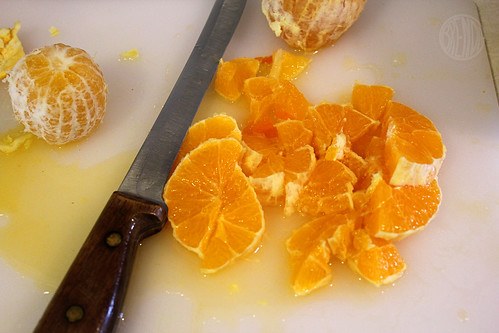 Chop the fruit up into bite-size pieces and reserve the juice. One of those cutting boards with a reservoir would be handy here but we didn’t have one. 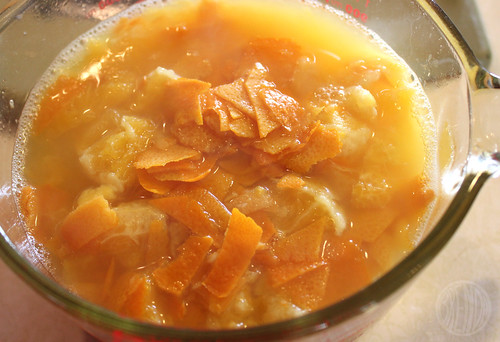 Next, place zest peels, 2 1/2 cups of water and 1/8 tsp baking soda in a sauce pan. Bring to a boil. Reduce heat, cover and simmer for 20 minutes. I’m missing some photos here. They were not photogenic and got REJECTED. 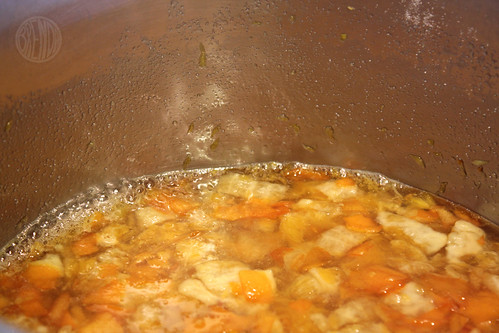 After 20 minutes add the fruit and juice and simmer for 10 minutes. Then add your four cups of chopped fruit and pectin to the six cups of sugar in a BIG ol’ pot and bring to a rolling boil. I learned a rolling boil is a boil that can’t be stirred down. My mom is so smart with these helpful tips. I know you probably already know all this stuff but I didn’t. 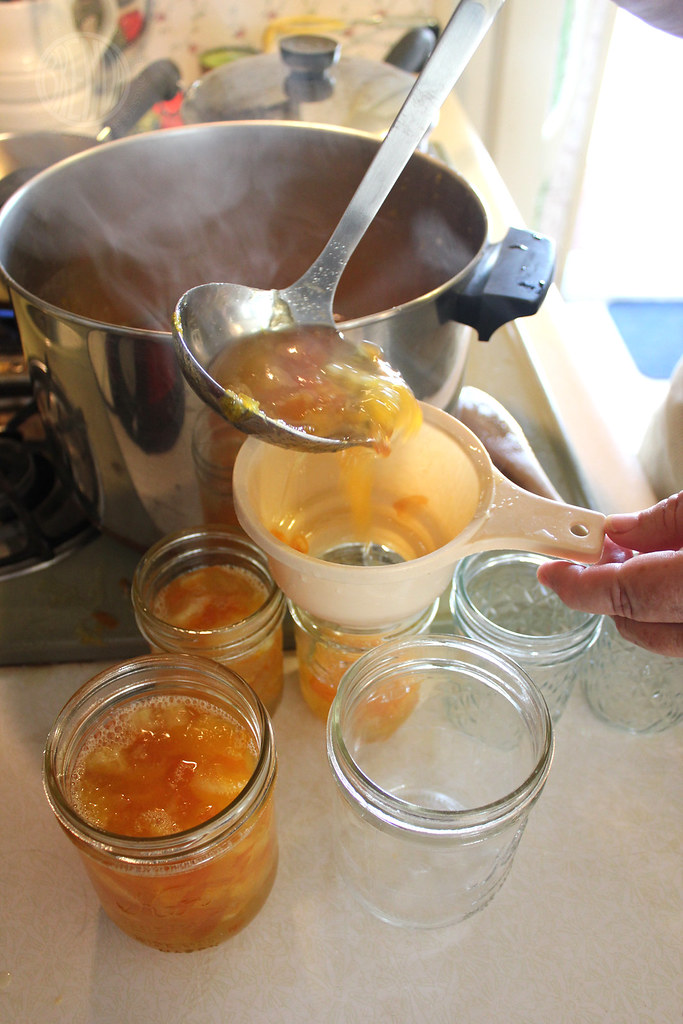 After the fruit “brew” has boiled at a rolling boil for a whole minute, you can turn off the heat and then ladle your delicious smelling marmalade into jars leaving 1/8 of an inch of space from the top. 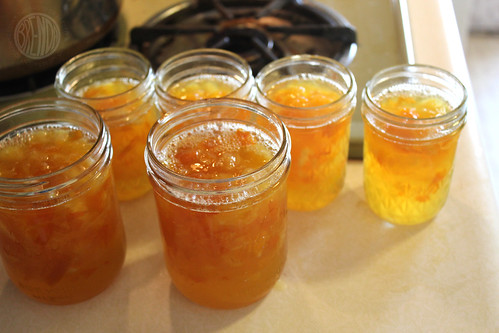 Like so. Aren’t they pretty? I call them my precioussssssssss jewels in my best Gollum voice. 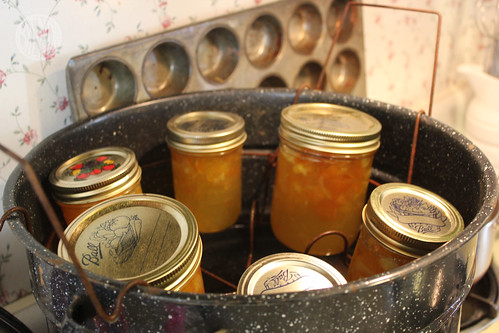 Then we screwed on the lids and let them sit in the Jar Spa aka a water bath. 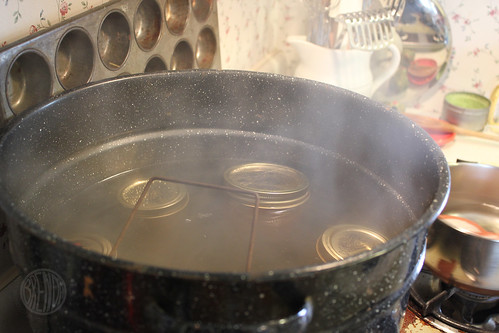 “Aaaaaaaaaaaaaaaahhhhhh…..” say the jars. (They were tense and sticky.) This is just what they needed. I sort of wished I had a spa to climb into too after all this mess. 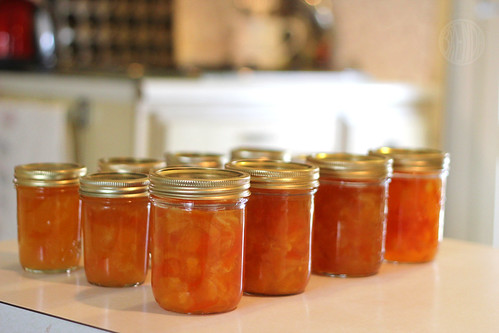 And that was that. We made two batches! I guess it has to set for a week or so but I opened a jar the next day and had some on toast. 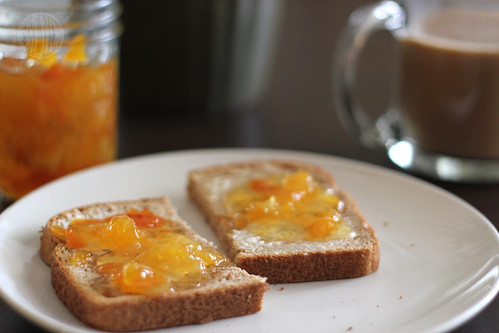 It was delicious! Why wouldn’t it be? It’s pretty much orange-flavored sugar. 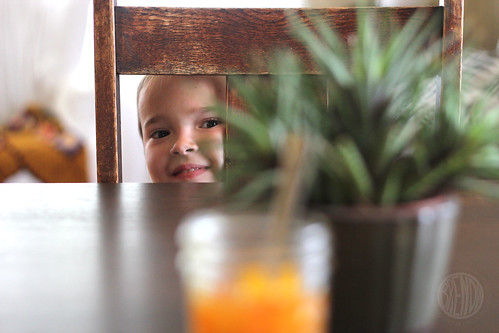 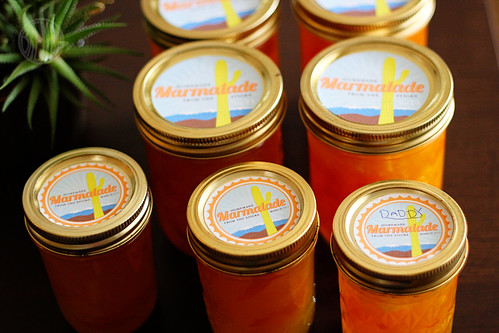 Then I made some labels (2nd version not shown) so we can give the rest away as gifts. It’s going fast. I think I’m going to have to make another batch! Good thing I have more oranges! I actually don’t have an orange tree in my yard. I have one lemon tree and two tangelo trees but my neighbor does and she said I can pick them anytime, there are plenty! What I really need to figure out how to make is lemon marmalade. Is there such a thing?