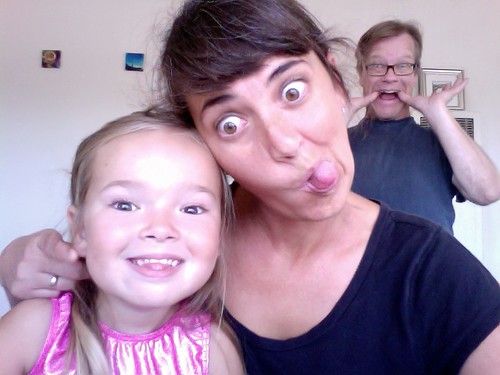 Toby and I celebrated our eleven-year wedding anniversary last week. We didn’t go out to dinner or take a romantic getaway somewhere. Nah, that’s not our style. We had a family day and Toby bought me a new laptop. You know, the important things. And believe me, getting a new laptop is sooooooo very important to me. I’ve been squeezing out every last drop of productivity out of my old dinosaur laptop for years now. It’s seven years old. Much older than most laptops ever even dream of living.

It didn’t play videos anymore. It took what seemed like a thousand years to turn on and shut down. I’d have to start the shut-down process and then walk away and do dishes or something just so I didn’t lose my mind waiting for it. The power cord was frayed. I’d have to pinch it and pull it and situate it just so to get the little green circle of light to turn on and then out of the blue it would flicker off and I’d have to do a rain dance or something to get it on again. And don’t even get me started on the battery. That thing was shot three years ago. So anyway, I loved that laptop dearly but I love my new one even more. I can’t even believe how great it is. It’s like lightning in a thin silver box. It blows me away. 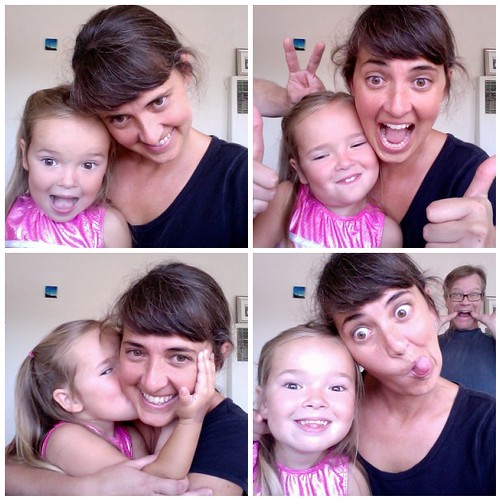 What did I get Toby for our anniversary? Nothing. In my defense, he didn’t want anything. But still, I know. It’s kind of sad.

I probably sound like the most awful, unloving, selfish housewife ever. And I am in many ways. I get to stay home with my daughter all day and frolic in the waves at the beach or putz around the playground mindlessly while Toby slaves away at his job that barely covers our expenses. It really is a luxury to be a stay-at-home mom these days and I am really thankful. But I’d be lying if I said it was all peaches and cream. This year has been tough for both of us. The economy, mid-life crises, family dramas and just plain getting sick of each other because our small rundown house isn’t big enough for the size of the personalities it holds. It’s been a rough year. I just hope we look back on this year someday and smile because we stuck it out.

I think we will. Most of all for this little person we made. 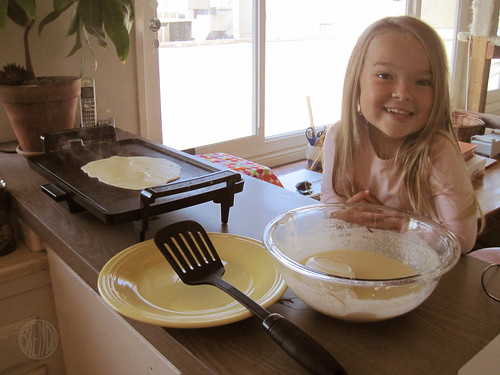 The night before our anniversary I had explained to Bug that Saturday was a really special day. I think I might have overdone it because Bug woke up the next morning shouting like we were going to a party or something. “Happy Anniversary! Happy Anniversary!” she sang out as she danced around the living room in her pajamas. “When are we going to the anniversary?” Poor kid. I had to explain that we really weren’t going anywhere but that it was a special day to do special things. Special things that made us remember why we got married in the first place.

First we made crepes. 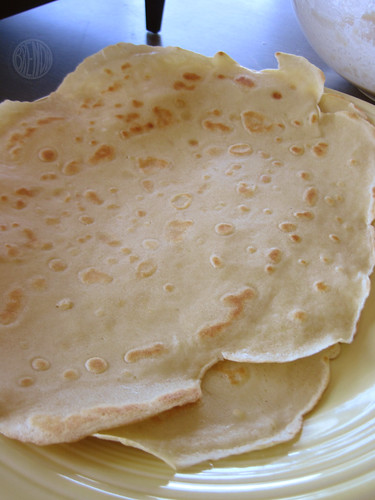 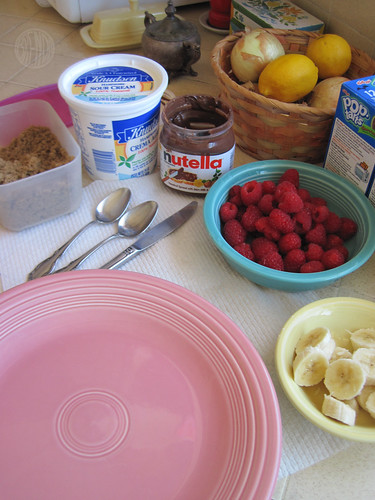 Crepes are special to me because before I met Toby I didn’t even know what they were. He’s the one who taught me how to make the pancake batter extra thin and sponge-y with added eggs. On our honeymoon we went to Seattle we had them every morning in Pike Place Market. I remember it so clearly. Walking down the steep sidewalk from our high-rise apartment, into the hustle and bustle of the street market. We’d wind our way around the stalls, past the vegetables, fruit and flowers and flying fish until we found the crepe cart where a woman served us giant burrito-sized crepes filled with strawberries and whipped cream and Nutella. It’s a good thing I lost twenty pounds before my wedding because I think I put five back on just during that week. Of course half of those pounds came from the three mochas I drank a day but that’s another story.

Crepes will always be special to me. 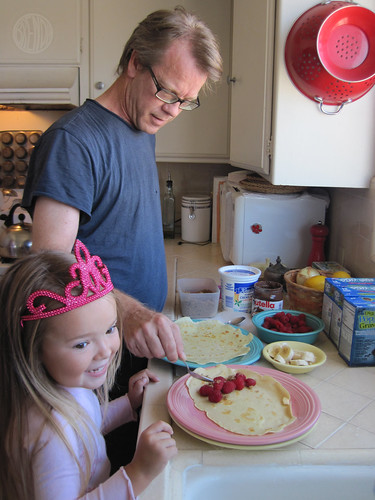 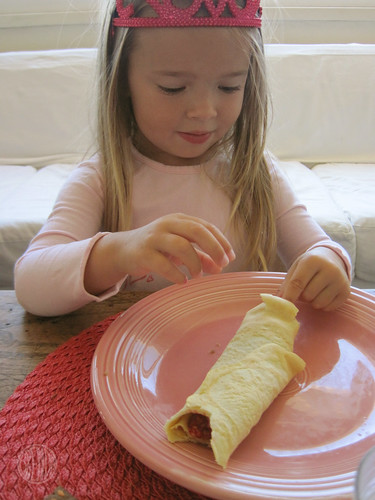 I think they’ll be special to Bug now too since they are now official “Happy Anniversary!” food. 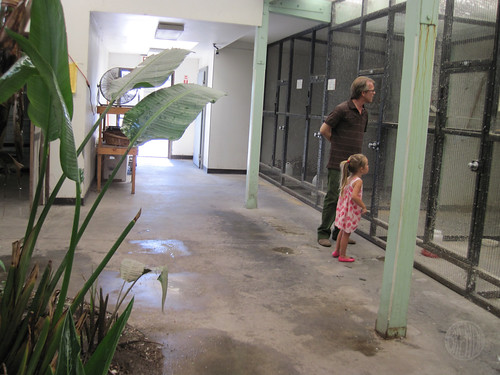 After our special Happy Anniversary breakfast, we took a little trip to the Magnolia Bird Farm. I know most people will think visiting a bird store is the most unromantic thing ever but it’s special to us. We only go probably once a year and it’s a fun family thing we do together. 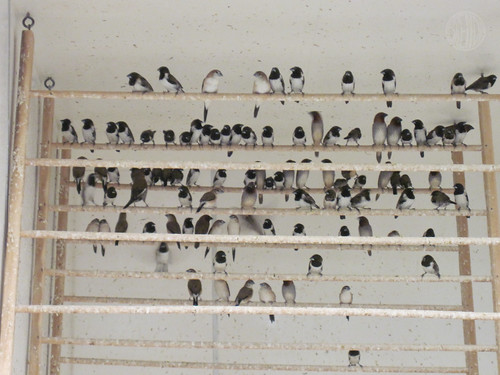 It’s kind of like going to a zoo that only has birds. You can walk around an outside aviary and look at all kinds of finches, parakeets, doves and parrots. There are palm trees and rubber plants growing in the middle and water drips down from the roof, creating an exotic jungle atmosphere. It’s not fancy. There is bird poop and mud everywhere and the cages are old and stained from years of use but it’s special and unique and something that most people don’t even know about. Since Toby has a giant aviary in his office that holds finches, we sort of collect birds as a hobby. We have spice finches and a few varieties of waxbills. We had a lonely orange waxbill that needed a mate so we were there to find him some friends. 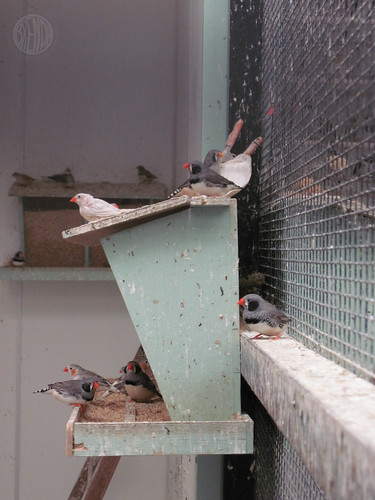 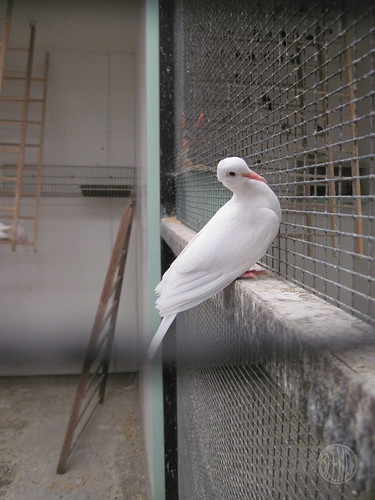 We found all sorts of new friends. 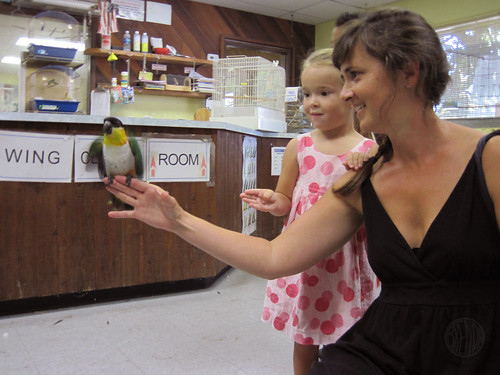 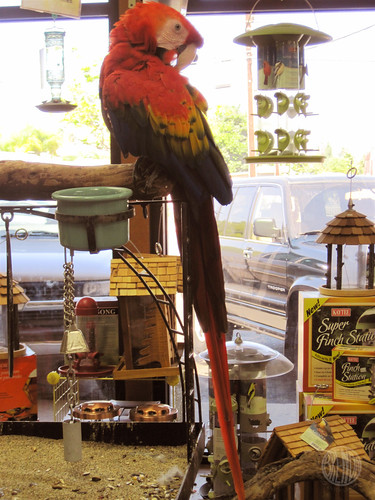 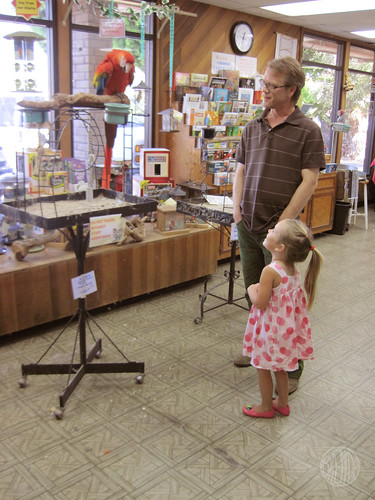 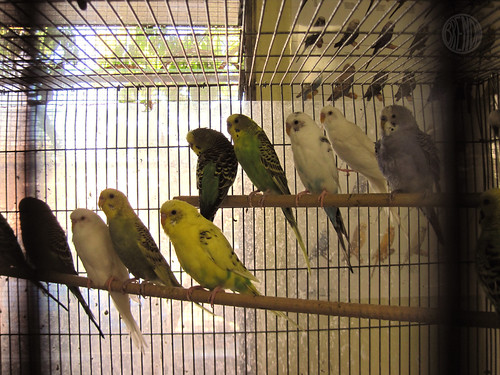 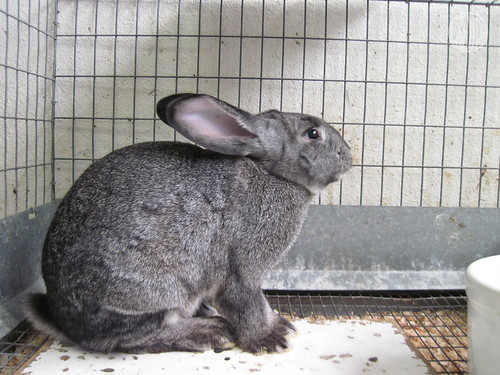 Even a bunny! Boy did Bug want to take that bunny home but Toby and I have had experience with rabbits as pets before and we do not ever ever want to have a pet bunny again. Not unless we live on a farm or something where the bunny can stay outside and chew outside things instead of our electrical cords and furniture. Bunnies are bad news for small run-down apartments. 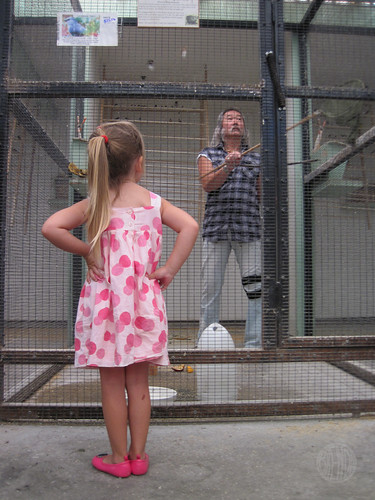 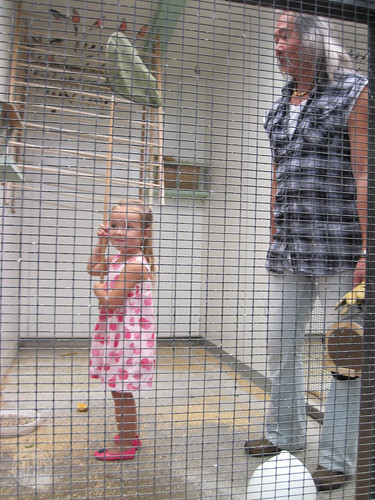 In the end we went home with one red waxbill, one yellow waxbill and two purply-blue waxbills. I forget their technical names but they are very pretty and supposedly get along really well with other birds. But best of all we went home with some fresh new memories of why we love the bird farm. They all know us there and this time they let Bug come inside the finch cage and attempt to catch her own bird. I’m glad she didn’t catch one though because the guy who works there who catches them is the master of catching birds. He’s super calm and quiet and then with a flick of his wrist he’ll swipe one out of thin air. Not unlike Mr. Miyagi catching flies with a chop stick 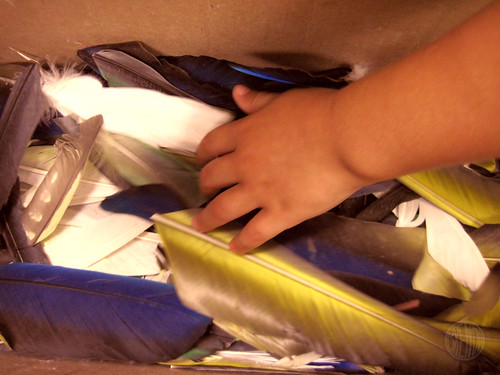 Then when they were boxing up our birds they let Bug pick out a fancy feather. That’s always fun. I hope we have many more years of Happy Anniversary visits. 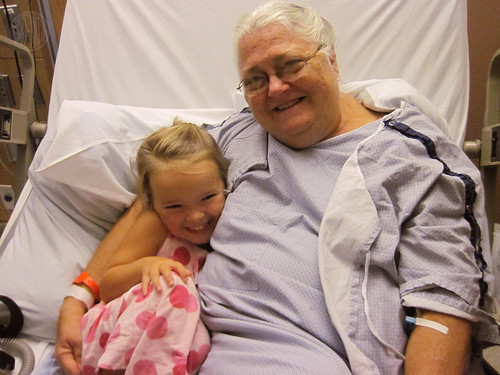 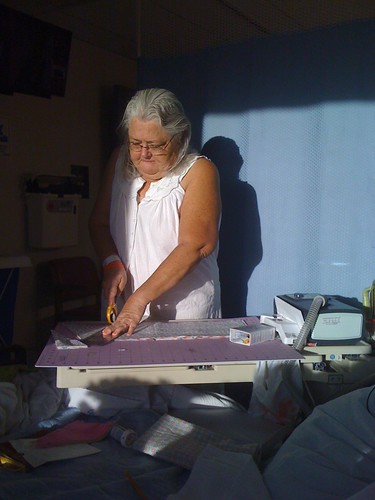