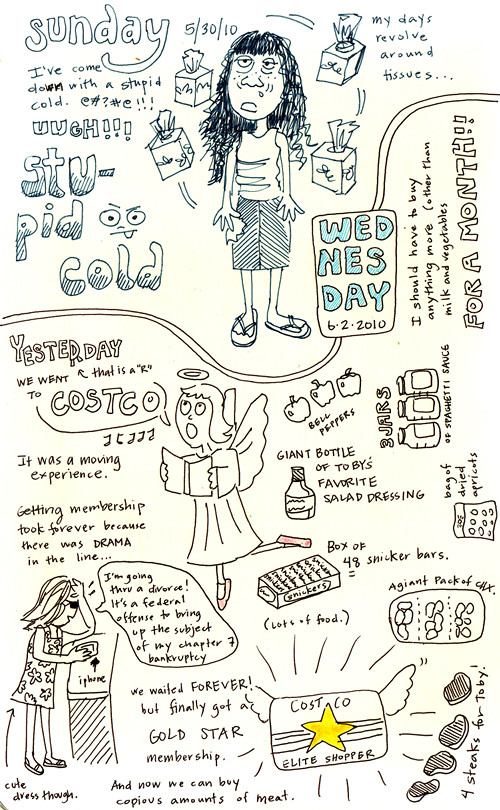 Wow. These are so old. A whole month ago and I’m just now feeling the tingling of possibly another sore throat. If anything, these sketches are handy for me to keep track of how often I get sick. I thought I don’t get sick very often but maybe I am wrong. The tingling throat could be allergies too, you never know.

Anyway, COSTCO! What a crazy place. I have not figured out whether it is a savings for me or not. I love the prices but I just don’t have the room to store all that much stuff! I’d love to buy a gigantic box of toilet paper for the price of a small pack but I just don’t really feel like storing it all under my bed or in the back of my closet or hey, look here’s another roll in my glove compartment! Nice but not so practical.

And yes, there really was some kind of drama going down at the membership desk. I wish I would have written about it when it happened because now it’s foggy in my memory. 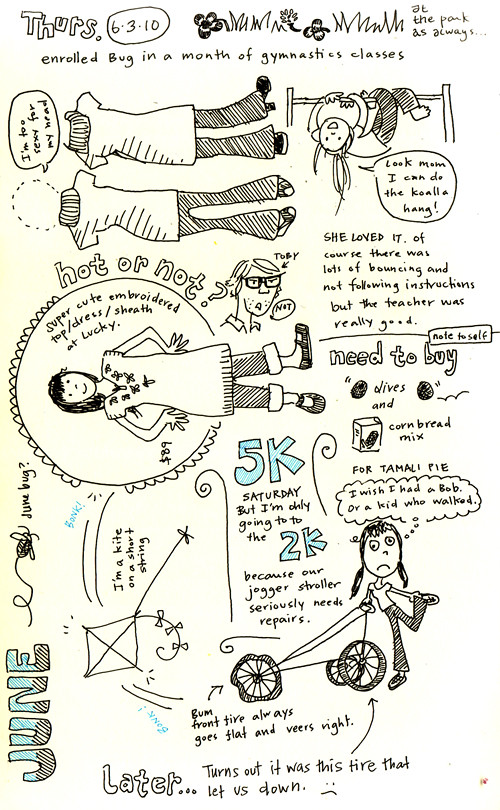 This has all already been blogged about. Yawn, snore. 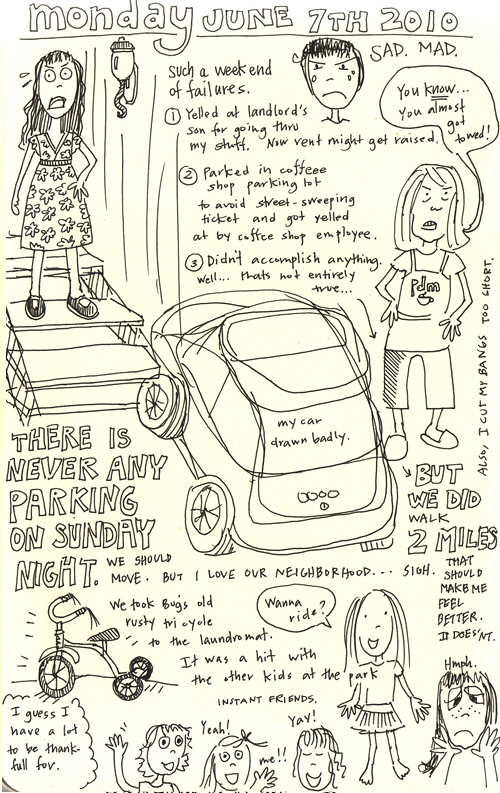 I’ve been having a lot of bad days for months now. And I didn’t even know half the crap that was going to happen when I drew this. Things have only gotten worse but you know what? Only I can make myself happy. So I am not going to play victim to this. Besides, we have tricycles that can be ridden! (Not by me of course) If that’s not a good reason to keep on smiling, then I don’t know what is. 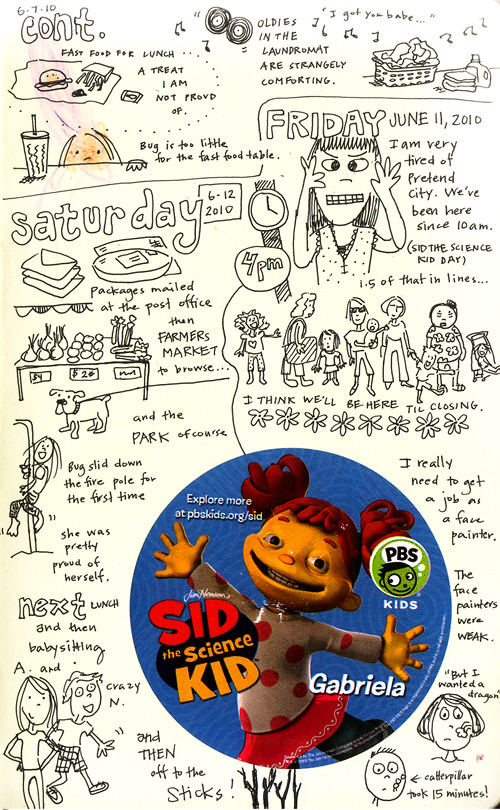 Ahhhh… oldies in the laundromat, the soundtrack of my life. Sometimes when I hear old top 40 songs from the 50’s and 60’s they comfort me even though the songs are super cheesy and annoying in their repetitive melodies. I think it’s mostly because the songs remind me of my Dad who can be super cheesy, repetitive and surprisingly not annoying. Mostly he’s just comforting. Lots of days I really wish I could cry into my Dad’s shoulder and be a little girl again. But here I am stuck in this thirty-eight-year-old body with all kinds of responsibilities and crap. Blarg.

Why am I bringing you all down? I’m sorry! Happy fun sketches! Face painting! Woot! 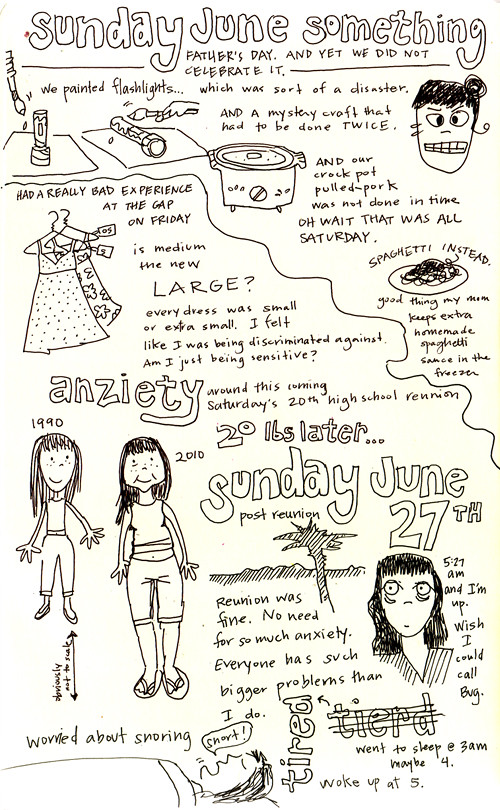 I thought about not including this sketch because it dwells on two controversial issues. However both instances completely worked out so everything is fine in the end.

First of all trying on clothes at the Gap was a really bad experience but I don’t think this reflects on the brand at all. I think it is purely the store near my house. I love Gap clothes and I love their style. I’ve found plenty of items over the years that fit me just fine. It’s just that I happen to live in a little microcosm of America that is populated by a majority of size two women. It’s freakish and everyday I wonder if they are trying to squeeze me out.

Secondly, my reunion was fine. It was silly that I had any anxiety at all about gaining 20 pounds over the span of 20 years. Nobody cares! Once I was there I hardly gave my appearance another thought (which is refreshing, really). I had a great time catching up with old friends and acquaintances. Lots of people I met had way way way bigger problems than I’ve ever had and they never stopped talking about them! It was like I had a sign on my forehead that said, “Talk my ear off! I’ve got all night!” My problems slid right under the radar and I felt surprisingly normal for a change. Reunion: in the can! 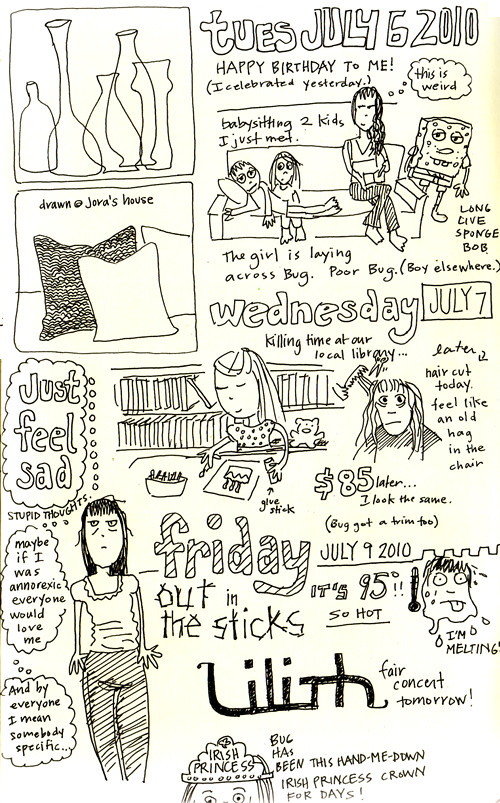 Sigh… my birthday and babysitting. I have a niggling feeling that the new family I babysat for didn’t like me. I’ve given up on my idea of being a nanny. I’m not really as good with kids as everyone thinks I am. I love kids…I just don’t think it’s my thing. Being a mom is enough for me.

I got a haircut, a trim really. Bug too. I thought I’d save some money and have my hair dresser skip on the styling part. Big mistake. She charged me just as much as usual, which was more than I had so I had to walk down the street to a bar and get money out of those stupid ATM machines that charge you three dollars for the convenience. It was yucky too because I had to take Bug with me.

So there I was walking through a dark bar with a sticky floor, getting money while a group of professional drinkers looked on from their mid-day drunkeness. Thankfully, they were all happy and smiling and not leering at me for bringing my kid into a bar. I got out of there as quick as I could but not without vowing to myself that I better find a new, cheaper hair dresser. It’s too bad too because I thought I really liked this girl. It’s probably not personal, it’s just business. Still, I gotta find somebody cheaper—like maybe my mom and the kitchen scissors if I just want a “trim.”

And next we have sad thoughts. UGH! Why do my sketchbooks give me away like this?!! Yes, I know they are STUPID sad thoughts. Stupid, stupid, stupid thoughts that I would NEVER act on because firstly, I am not that stupid and secondly I don’t have that much willpower. Moving on…

Lillith Fair! Woo Hoo! I can’t wait until you guys get to read my review. It’s getting approved by the sponsors and going through some editing. I really really hope I don’t have to rewrite it again because it was a super fun concert and I think my review rocked! I’ll keep you posted on that.

And that’s all I drew! Enough, I think.