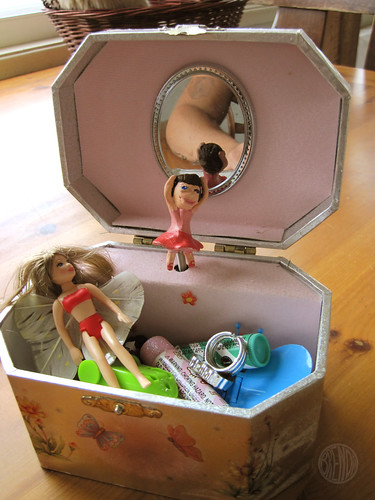 The kids I babysit have wonderful things and every once in a while they hand-me-down them to Bug. We end up with all sorts of designer clothes, board games with missing pieces, half worked-through workbooks, knick knacks and odds and ends. It’s a nice perk.

Some of the things are junk like a plastic crown that says “Irish Princess” with tacky green clovers all over it. Bug wore that silly crown every day for a week until she finally broke it while trying to wear it on her leg for some reason. Another treasure is an old music box that is covered in stickers and the ballerina is missing from inside it. Normal people would probably drop these gently-worn gifts off at a thrift store but Bug fell in love with it and begged me to make a new ballerina for it.

I hemmed and hawed over how to make a tiny ballerina. I thought maybe a pipe-cleaner and some tulle would do the trick but I couldn’t quite work it out. Then I remembered this book we read a while back about a cat who wouldn’t come inside. I was quite inspired by the Super Sculpy figurines and at the back of the book the artist has a nice write up explaining how she created the scenes. It’s brilliant.

I thought I might try this with a ballerina! 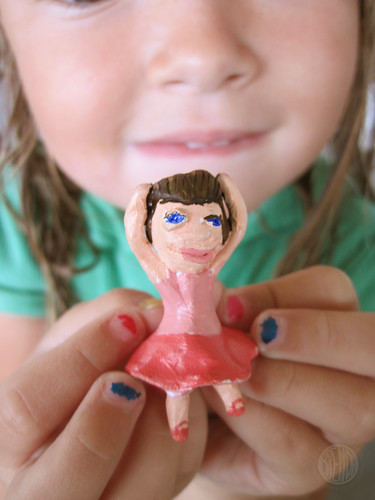 It was a little rough-going. Obviously I need to work on my fine-sculpting skills. But it was fun and delightfully easy to paint. Her face needs some lip reduction but Bug loves her. 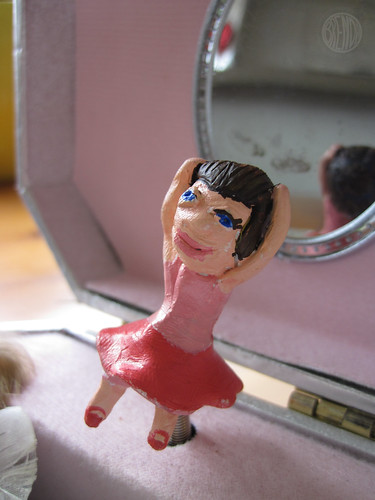 And best of all, she twirls to the music when wound up. We haven’t quite figured out how to get the box to close without cracking her in half yet but we’re working on it. I’m thinking there might be a series of Sculpy ballerinas in my future.