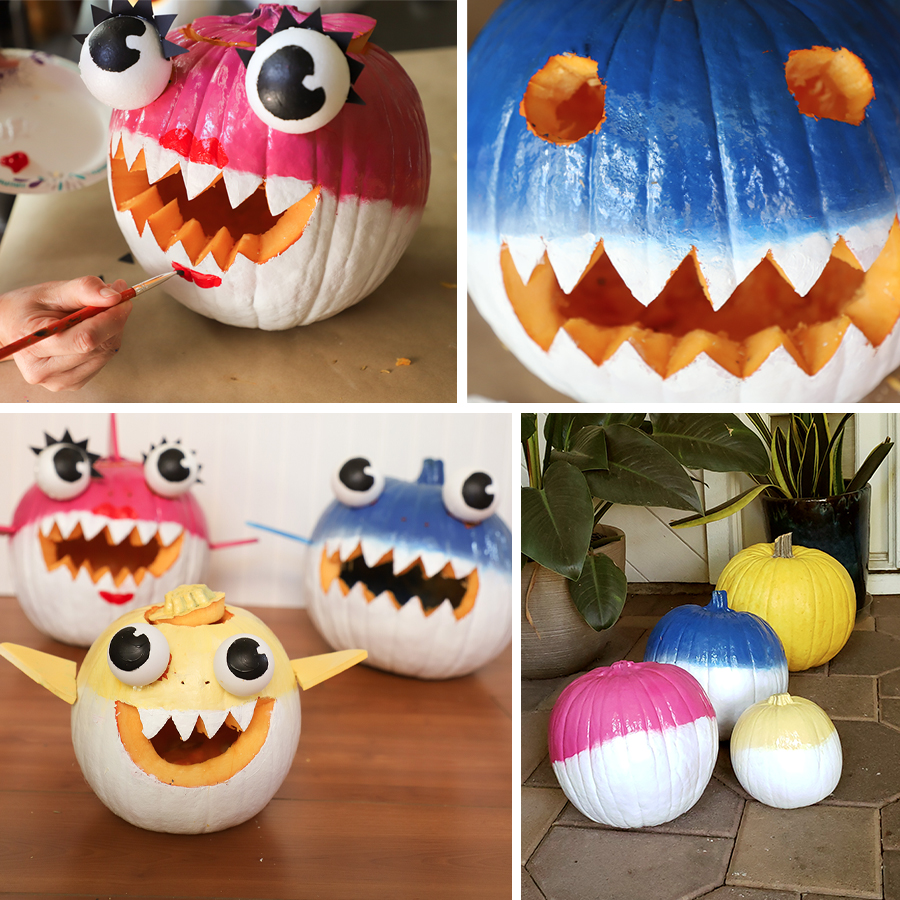 At last the baby shark jack o’ lantern project is done! Whooooeeeee! It’s not that this project took me so long (maybe two days) it’s that I procrastinated on it for a good week or more. That’s what I do. I stress about projects for days until I finally get up the nerve to bang them out. It’s a love-hate relationship.

I’m really happy to be done with this one. It was a little bit of a pain in the butt. Mostly the spray paint…I think it was worth it but carving into painted pumpkins can get messy. I’m not saying don’t paint pumpkins, do! Especially if you aren’t going to carve them. But carving up spray-painted pumpkins can cause little flecks of paint to fall off. I had to do a lot of touch up. That’s what you get for reading a small blog like this one: the behind the scenes secrets. Real crafters have Pinterest fails all the time, we just keep going anyway.

My next projects involve costumes and photoshoots. I have so many photoshoots scheduled this month. I also planned another golden hour dance party for October 24th. Stevie Nicks-themed. I already have my costume planned and everything. I bought this floor-length lace black dress with a neckline down to there and I’m going to wear Payam’s top hat and feather my hair. I might wear a bralette to make the neckline down to there not so risqué. The location of this party is this really weird run-off drainage system in a local park. It almost looks like a skate park but it’s not. There’s a huge pipe that lets out water onto a cascading series of cement steps. The steps are all different heights and make no sense but when I found this place I immediately thought it would be excellent for a photoshoot with various pedestals for models to stand on. Let me see if I can dig up a picture of it. 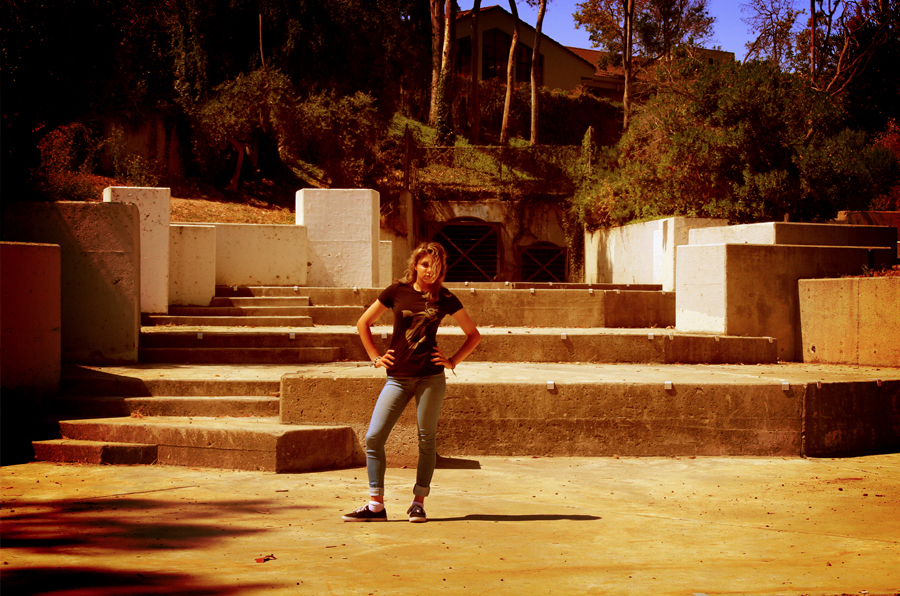 Here’s a picture of Looby modeling my SAJ t-shirts that never really happened. Isn’t it a great location? Can anyone explain to me how this run-off situation works? It seems more like a stage to me than water drainage. Is there a civil engineer in the house? I can see they do NOT want skate boarders. I hope they don’t mind dancers!

The plan is to get everyone to show up in costume and bring along my portable boom box and have a fun golden party dance party for an hour. Cool, right? If you are local, you should come. Parking is kind of a pain. It’s better if you can walk in. If you know where this is, then you know. If you don’t, private message me.

That’s all for now! First of the month priorities: get a new banner done! 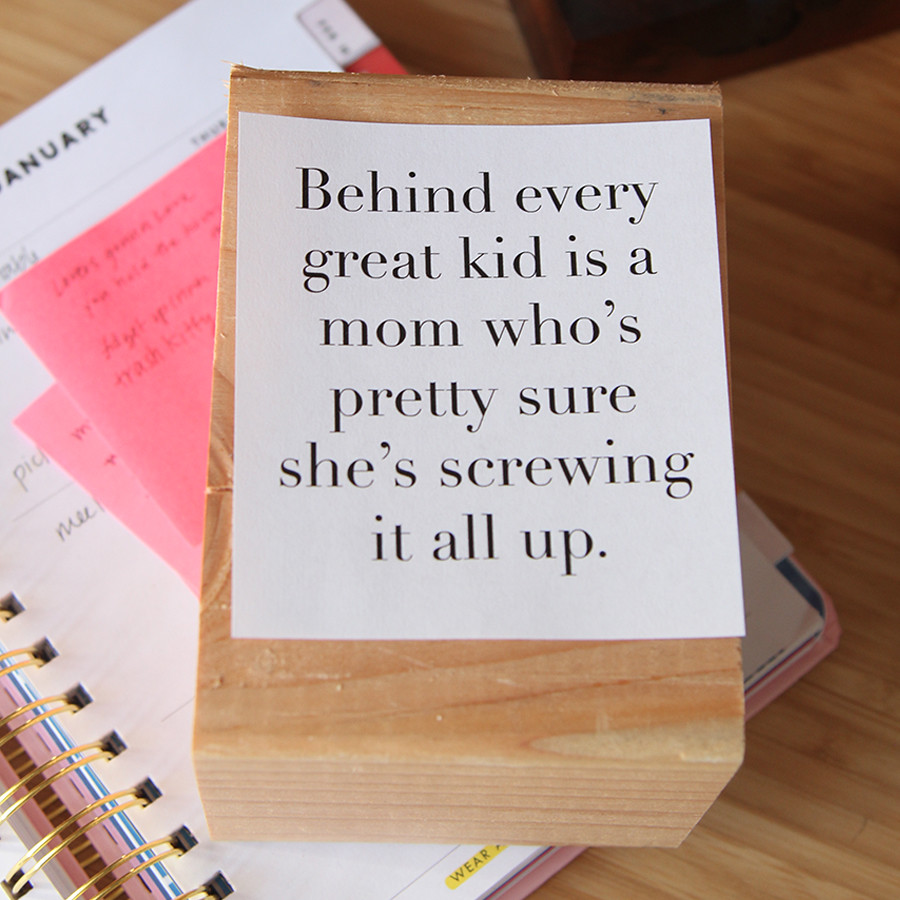 I’m up to my usual hijinks and I’m planning another event. This one is for Bug’s school. I’m kind of a passive PTA member who doesn’t go to meetings but if called upon to create some kind of fun graphic design project, my ego won’t let me say no. This gets me into all kinds of trouble. Most of the time I love this trouble.

This event is no exception.

A little back-story: Once upon a time there used to be this program with the school district called a “mother daughter tea” and it was a fun little event where a speaker came in and talked to fifth grade girls about puberty and the big P-word. Well, the year Bug was in fifth grade they didn’t do it because nobody knew what it was.  The PTA was completely clueless and when it came up in a budget meeting they decided to pass on some such foo-foo social event because who has time and money to just spend on girls and their mothers? They had no idea it was the big P-talk. Poor nurses and teachers of fifth grade girls be damned.

You know what I had to say about that. I made a big fuss. Well, amongst my friends of course. I would never go to a PTA meeting and make an actual fuss. I’m way too passive aggressive and nice to do that. I made many small fusses with my friends and decided to take it on with my best pal, Maria (the mother who never says no to any of my hair-brained ideas). And by take it on I should mention that we are going to host the fifth AND sixth grade girls because the sixth grade girls got shafted last year. This means it’s basically the size of a wedding. Budget smudget. 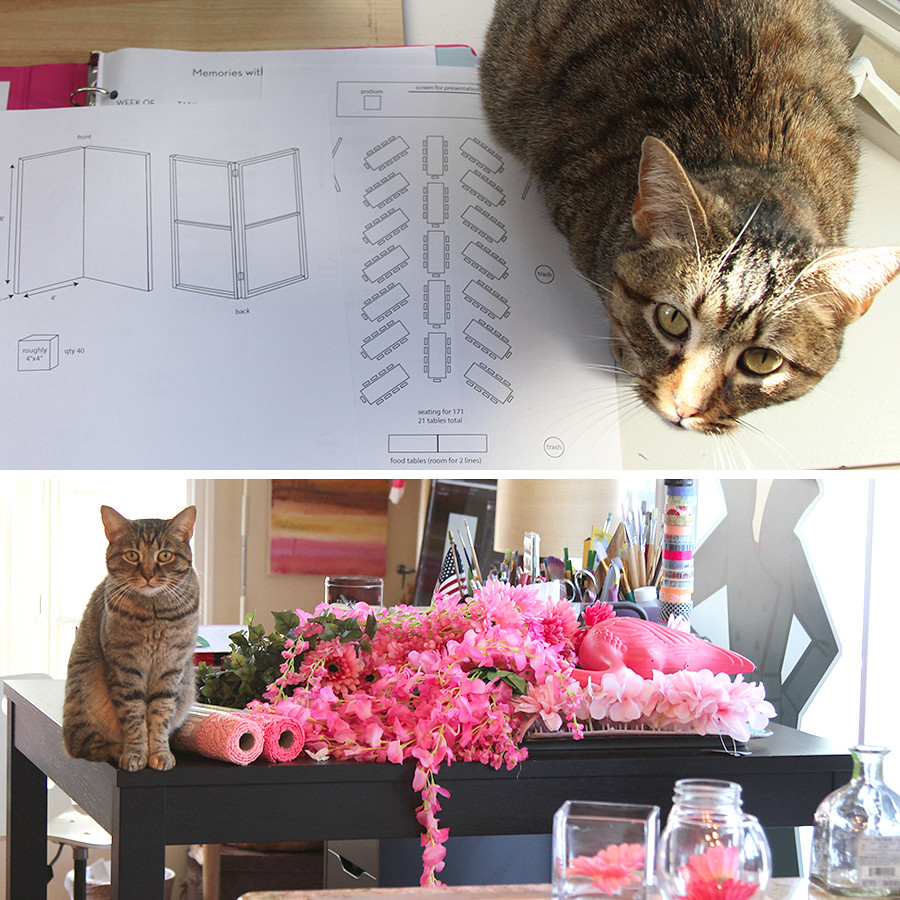 Instead of hosting a “tea” (because that’s way too tame for me) I decided to one-up that idea and host an *instagrammable event* (think mini color factory) and call it “Memories with Mom” because I love the idea of taking selfies with your daughter. I have been doing it will Bug after all before we even called it a “selfie.” I wanted to call the event “Selfies with Mom” and capitalize on the craze but Bug nixed that with a hard eye roll. 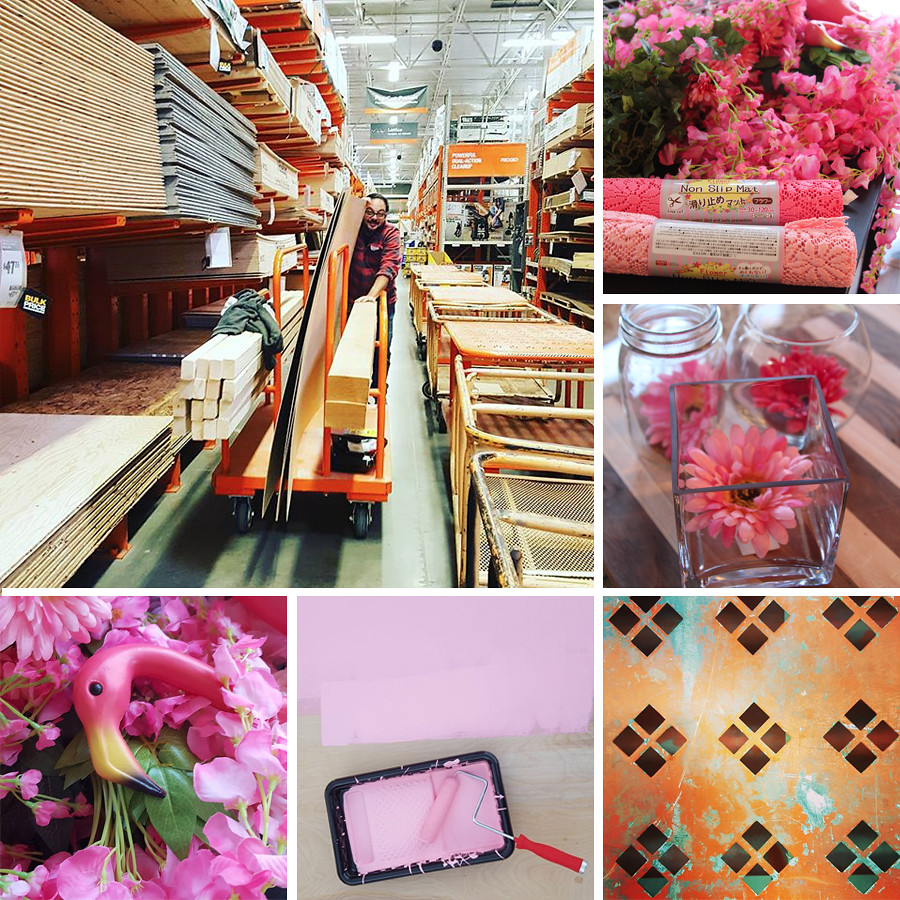 You know what all that means: time to make some backgrounds! I’ve made cardboard backgrounds and butcher paper backgrounds and vinyl backgrounds that we tied to pipes on the wall in the big multi-purpose room because the walls are brick and you can’t really nail or attach anything to them and tape is always out  because of their big “NO TAPE” rule, that I hate. Anyway all those backgrounds were miserable failures so I stepped it up big time and hired Payam (except without paying him) to create actual wood constructed backgrounds. Go big or go home, right? Thankfully he loves me enough to pretty much take on any wild whim I might pull out of my butt. And believe me I pull out a lot of them. 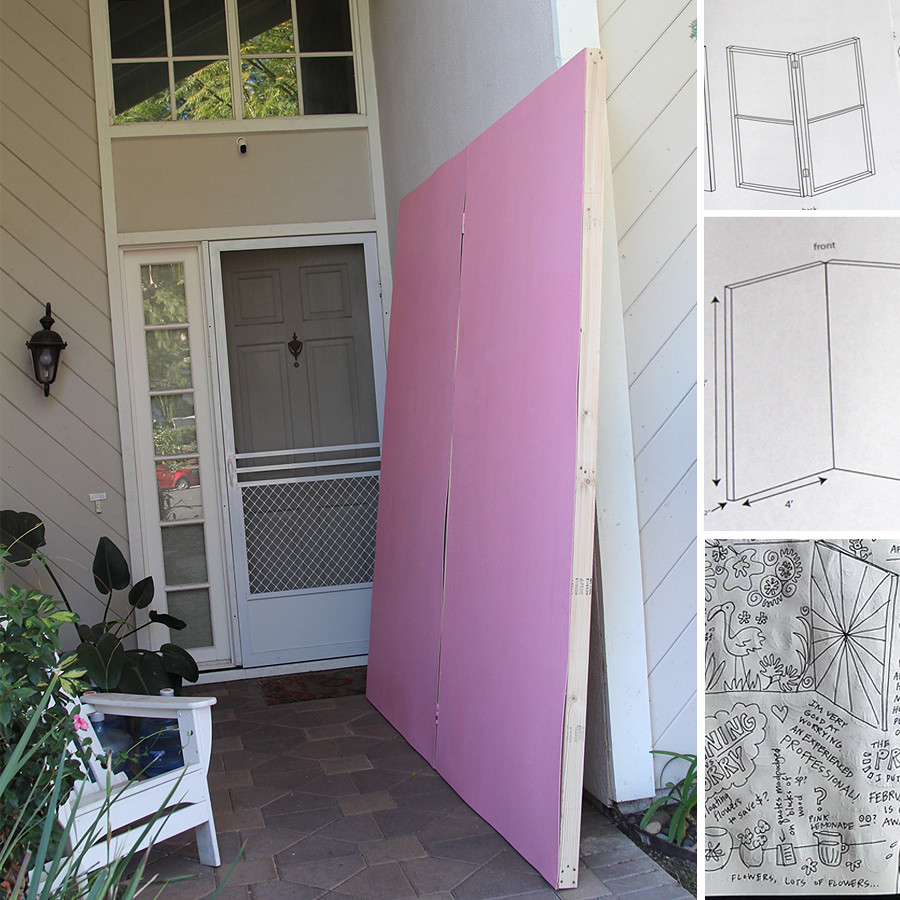 I drew up some schematics (Never underestimate a graphic artist with a vision!) and he built them exactly to spec. He is awesome. And also sore from head to toe and pretty much boycotting my project today to spend it on the couch watching soccer instead. I am completely understanding. Well, for the most part.

There is one problem with my specs. I failed to realize how big eight feet really is. It’s a big mo-fo! Like way too big. How am I going to get this in and out of my house let alone staple flowers to and transport to the school where they have given me a small 8-inch (by who knows how high) storage area next to the piano in the MPR.  I may have had a small mini panic attack this morning over this problem. Thankfully my best mom pals have come to my texting rescue and consoled me. We will figure it out, they say.

It is an awesome wall and it will be used.

But we are not done. I have to decorate this mofo (In a pink floral theme, swoon!) and I am also tasking Payam to build one more wall. Why? Because we need more than one instagrammable station at this mother-daughter event. I’m requesting the next wall will only be six feet high and hopefully it will be much more manageable. I plan to paint that one with a rainbow vortex. I’ll keep you posted.