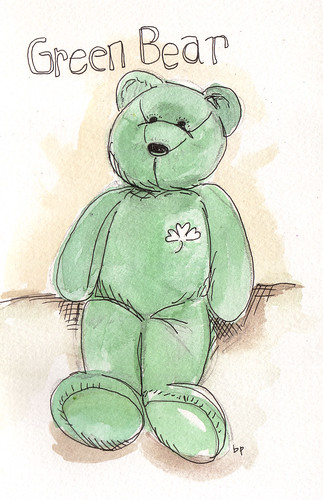 We lost Green Bear for a whole week and then we found him again. It was terrible. I was having visions of him left at the laundromat and adopted by some other kid who wouldn’t love him as much or worse that he somehow fell out of our car and was in a gutter getting rained on. I didn’t know I cared so much about Bug’s old bear. She’s never been one to have a favorite thing. No lovey or blanket that she carries around exclusively but she has loved this bear more than the other 399 stuffed animals she has.

At first she was so mature about it all, telling me that he’d show up eventually and that she was okay without him. She had Valentine Bear and Madeline and then she rambled on a bunch of other names of other stuffed animals that she loved. But then last night it was late and she was tired and when we talked about Green Bear again and went over all the places that he could be, she started tearing up and was inconsolable about him. I started thinking I didn’t care how broke we are right now. I better find another bear exactly like this one on ebay somewhere and hope it’s not a collector’s item.

I lay in the dark fretting about him for a long time. I even prayed. Then about midnight I got up and snuck out of the house in my pajamas to go look in the car one more time. I was cursing myself for all the times I let her take him with us on errands. That bear should stay in the house and never go out. Why am I such a softie about things like this?!!

He wasn’t in the car. I came back in the house, went back to bed and lay in the dark trying to put it out of my mind. Then I looked over at Bug’s dollhouse and there under the table I saw something. I reached under the dollhouse and there was Green Bear. He’d been inches from me all this time. How many nights had I laid down next to Bug and talked to her about Green bear and fretted about him and he was right there next to me?!!!

I don’t know. I know it’s just a stuffed bear and I shouldn’t get all mushy about material things but I hugged that bear with all my might. I felt like I was four again, loving some soft stuffed thing. Maybe I should have prayed about it sooner.