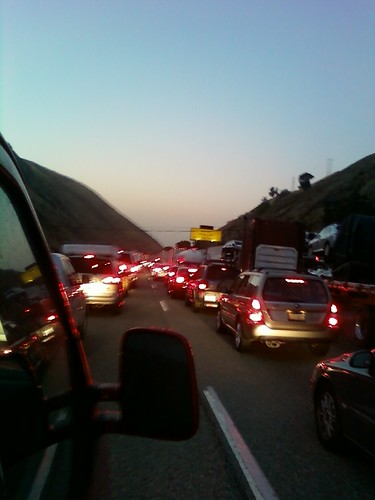 We left late. We always leave late. It’s no big deal. But unfortunately that put us right into traffic going through L.A. I knew this would happen. It always happens. The funny thing is that it sort of worked out because we were destined to get stuck one way or another. This way at least Toby got one more job done before we wasted two, three or four hours in traffic.

We made it through L.A. traffic okay but got stuck in horrible terrible traffic in Gorman. A semi had a run-in with a fence and spilled fuel over four lanes. The whole pass had to be shut down for TWO hours while they cleaned up the mess with a hazmat team. We sat so long that everyone got out of their cars and started chatting with their neighbors. It was almost cheerful.

You’d think everyone would have been honking and cursing at Cal Trans, but no (that was just Toby). Everyone else got out and jovially told stories of all the other times they had been stuck on a highway pass like this. People walked their dogs. Some even got out their bikes and took a quick ride down to the accident site. Truck drivers listened to their radios and reported to the rest of us what was going on. It wasn’t so bad once we figured out why we were stuck and how long we were going to be there. It’s the not knowing that kills you.

I texted Bethany and called my mom and they were able to look up the accident on the internet for me. But by the time they got back to me, I had pretty much found out the same information from a grizzly old truck driver next to us. He was such a character. Tall, dark, in his late fifties or early sixties maybe. His blue plaid shirt sleeves were rolled up to his biceps revealing old dark hairy man-arms that had spent many hours in the burning hot sun of an open truck window. His hair was slicked back in a wavy greasy way that sort of reminded me of the Fonz. He was probably good-looking in his day. He had a wicked grin and was full of funny sayings, like:

“If you put Cal Trans and ODT (Oregon Department of Transport) in a bag and throw them up in the air, they all land the same: stupid.”

Then he’d chuckle at himself. The world was just a great big joke to him, even if he was going to get docked pay for delivering a load late.

He reminded me of this guy who lived on the street I grew up on. His name was Spike and he rolled his t-shirt sleeves the same way. He always had a cigarette hanging out of his mouth and his pants were always hanging off his narrow butt. All of us neighborhood kids used to marvel at how Spike managed to keep his pants on. It was some sort of trick with his belt and the way he trudged up and down our street so slowly.

Spike’s doctor had told him that walking was good for him so he walked up and down our dusty dead end street twice a day, stopping along the way to gossip with whoever was out. Which was usually me and my brother and my mom. He kept us up to date on everything and anything that might be happening on our little street. There were probably only be four or five families living on that street but he knew them all and everything they were up to.

He was a dirty old man in the true sense of the word dirt. His nails were blue from oil changes he’d done fifty years before. He owned a diesel mechanic shop next to our house (sorta tells you what kind of neighborhood I grew up in). We always made jokes about what a great view we had out our kitchen window. You could see blue skies and a nice wide open view of the San Jacinto Mountains if you didn’t mind looking over the half-dozen broken-down cars that Spike kept in his junkyard right next door. We never saw him actually working there but his hands were always dirty. I sort of miss old Spike. He was an American classic.

Anyway, if it weren’t for all that traffic in Gorman I might not have thought about Spike and traveled down that memory lane. Maybe it was all meant to be. Thankfully, Toby is a night person so the two-hour hold-up just put us in later at our hotel. Which is not much of a big deal to me since I’m pretty much dead weight after 8 o’clock anyway.

While Bug and I lolled our heads this way and that, Toby drove deep into the night. I had picked up a book on CD (The Life and Times of the Thunderbolt Kid by Bill Bryson—I highly recommend it) from the library and that really helped Toby push on through. By 1 o’clock in the morning we were at our hotel in Sonoma and no one was worse for wear. At least no one who was going to complain about it anyway. 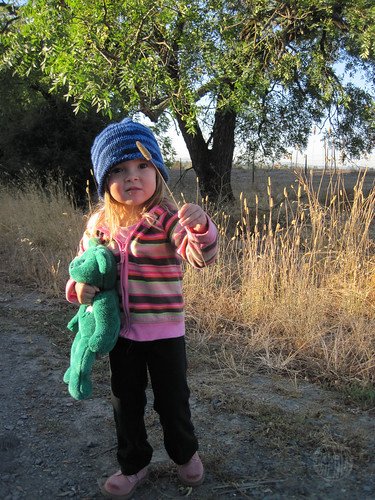 The next morning Bug and I went exploring around our hotel while Toby slept in a little. He didn’t really even sleep in, but we decided to spare him our early-morning restlessness. I don’t know who gets the wiggles worse in the morning, Bug or me. I try to lay still in bed but once my eyes pop open it’s pretty much a lost cause. I also try to be quiet but I think I’m cursed. If there is something that can bang or creak, I will find it. I’m just better off getting as far away from those who are sleeping as possible. Which is perfect since Bug is a morning person too.

Behind the hotel is a little dirt road that I love. We stop at this hotel every time we are driving through and last time I got a few really good photos of the oak trees in the glistening morning sun. Armed with my camera we set out to explore and collect a few more shots. 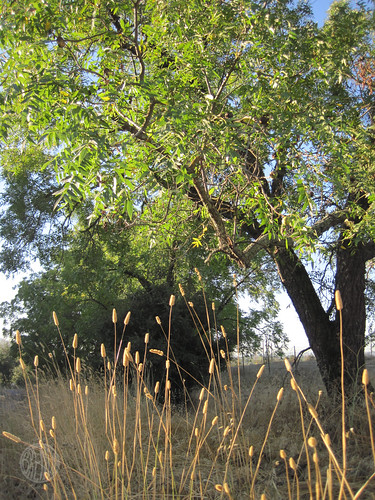 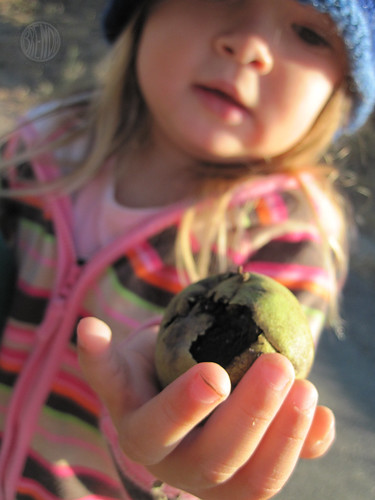 Bug found some walnuts. She is fascinated with seeds, fruit, flowers, leaves…pretty much anything that grows and could be green at some point. It’s her latest obsession. She’s even requested a “Seed Birthday Party.” I’m not sure how I’m going to pull that one off. A garden party in January? What do you plant in January anyway? Broccoli? I do like a challenge but hmmmmm! This one has me thinkin’. 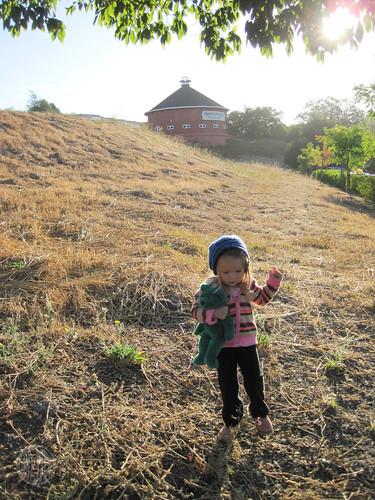 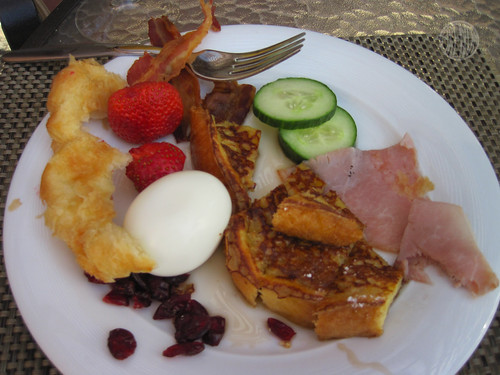 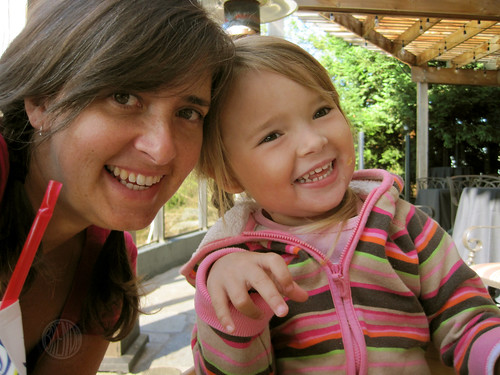 By nine we were back at the hotel, having breakfast with Toby. From there it was only another five hours to Eureka which put us into the Redwoods with plenty of time to stop and take pictures of the giant towering trees. 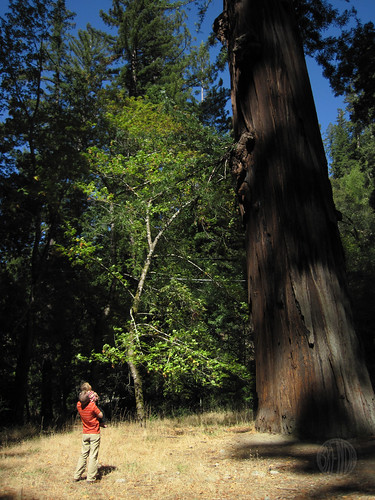 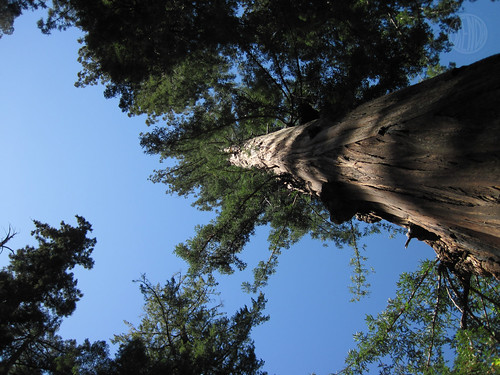 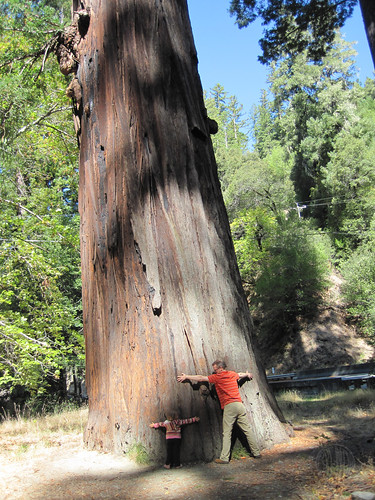 Traveling with Bug is getting more and more fun. She’s so much better at communicating and remembering things. She’s incredibly curious and asks great questions about everything. She and Toby had a lot of fun discussing how big redwood trees really are. They are reaaaaaaaaaaallly big. 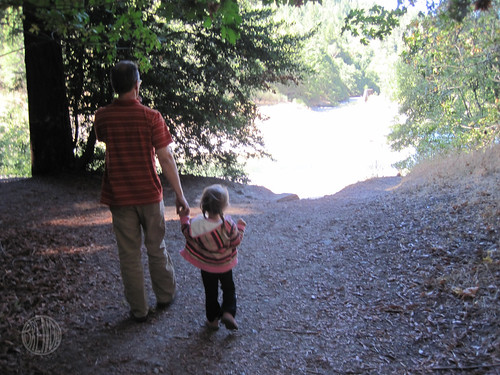 We took some time out to visit one of Toby’s favorite riverbeds, threw some rocks, relaxed in the sun. And it’s a good thing we did because that was the last of the sunny weather we’d see for a few days. 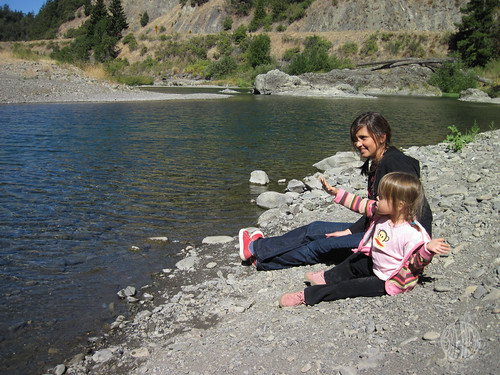 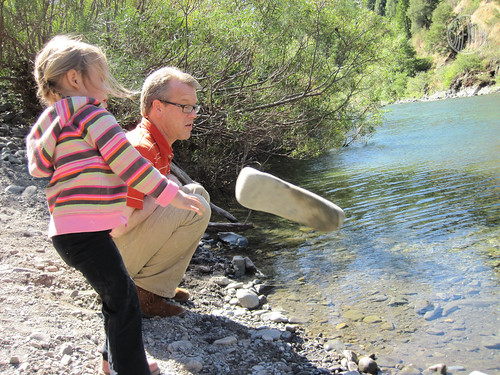 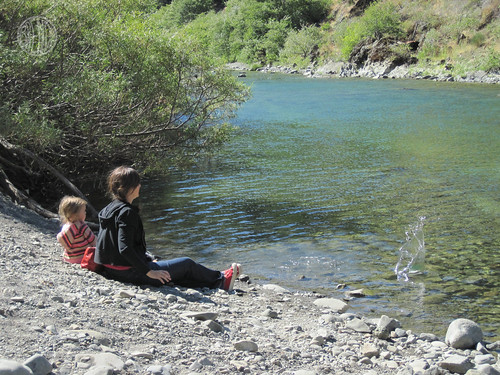 We tested out the new waterproof camera. 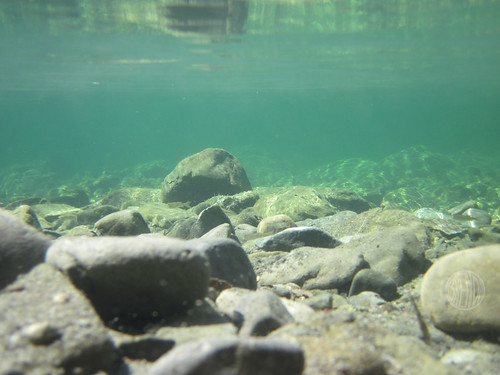 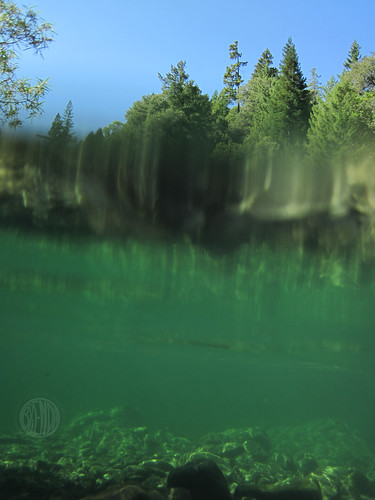 And then we headed off to the Grandparents’, home of the infamous long-haired, gimpy-legged, blue-ball-loving dachshund, Hansel. 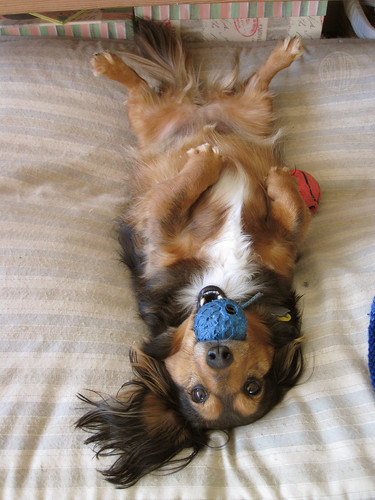