Ity Bitty Parties! I’ve seen this here and now on my good friend DeliaJude’s blog. I love the idea. Small as a theme can be so so cute and good for the pocketbook! 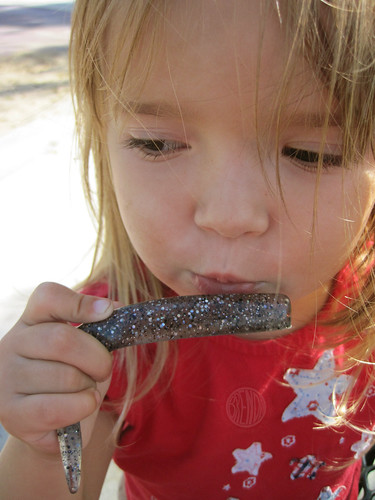 Yesterday we ran some errands with Toby and stopped by a couple of bait and tackle shops looking for a tangle-proof fishing pole for Bug. The only problem with bait and tackle shops around here is that they are filled with everything you need to go salt-water fishing and they hardly have anything you can use on a lake or a stream. We didn’t know this until we’d stopped into a couple and found ourselves bedazzled by the myriad of funny rubber fishing lures there are out there.

There are thousands of them! Every color, shape and size. Banana slug? Check. Purple glitter with bubbles? Check. Something that looks just like a squid? Check. They had everything. I have no idea how one fishes with these rubber lure thingies but Bug and I were quite fascinated. I think I might buy a bunch of them and make them into a mobile or something someday for an Alpha+Mom craft. What? It would be totally cute in a boy’s room.

Anyway, Bug fell in love with a sparkly gray and silver one. (Not green!) She named him Sluggy Sluggers and let him sit on her arm like a pet slug. Toby asked one of the employees how much the lure cost and the employee gave it to Bug for free. Cute gets you all kinds of perks, let me tell you. That kid is so spoiled by strangers. It turns out lures like Sluggie only cost 59 cents or something so it’s not that big of a deal but don’t tell Bug that. She walked around with Sluggie all that day and the next. 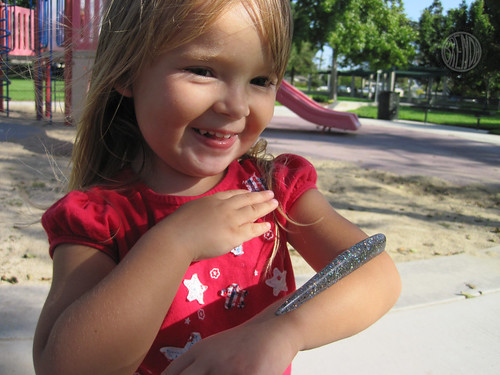 We took him to the park. He didn’t really like the slide. 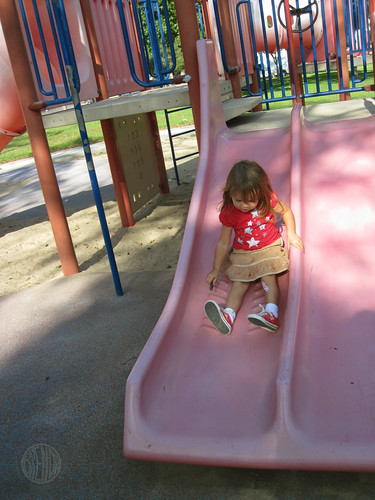 He’s very sticky and will stick to horizontal surfaces for a few seconds. Bug thinks he’s the greatest pet ever. He can live in her cup holder. Have I told you about her cup holder? Probably not.

A while back we got Bug a new car seat. Her old one was a hand-me-down and I thought it was perfectly good until somebody explained to me that safety standards change, and there’s a rumor out there that the plastic on out-of-date car seats can splinter and break like old bicycle helmets if you get into an accident. Here I thought the expiration-date thing was just a hoax to get you to shell out more bucks to the car seat industry and fill up the landfills but I guess they do have a reason to expire after all. So I drove around with a guilty conscience for a week and then finally broke down and bought a new one.

Turns out her new car seat is Ultra-American and comes with a super-sized big gulp cup holder. You know, for all those big gulp slushies we let our kids drink these days. Whatever. I hate that stupid cup holder.

The cup holder is on the right side of her seat and her seat is on the right side of our car (so I can reach her from the driver’s seat and hand her the %$#@ pah when it drops on the floor). Also, remember that our car is small. We don’t have a great big airy mini-van with lots of head space. The doors are small and compact and even a normal-sized person needs to tuck themselves into the car carefully. This has never bothered me.

However her car seat was not designed for such a small car. Every time I put her in and out of her car seat I have to carefully lift her up and over the giant hulking cup holder. Or I have to wait five-hundred million years for her to climb in herself OR I accidentally bang her head on the roof of my car as I’m lifting her over OR I accidentally scrape her leg on the cup holder. Whichever one happens, it is a major major production that usually involves tears. STUPID STUPID STUPID cup holder.

Long story short: Bug LOVES her cup holder. Not for drinks but for her imaginary pet lizard. Every time we drive anywhere she tells me all about the habitat she has created for him. He has water and some rocks and even a flower to rest his head on for a pillow. Then she begs me for a real lizard and we spend hours arguing about how a real lizard couldn’t live in the car because he would DIE of heat exposure. It’s a subject I’m a bit weary of. 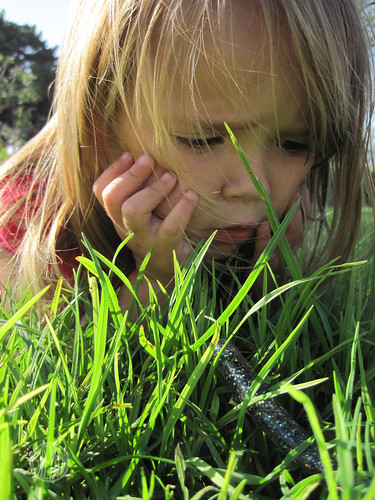 So if Sluggie wants to live in her cup holder that’s fine with me. I just hope he doesn’t melt. Not that I should worry, Sluggie doesn’t stay in the car. He comes in the house. He eats next to her. He takes a bath. He really loves bathtime because his skin “is just like Shamu.” He even sleeps with her on a little pink blanket folded up. 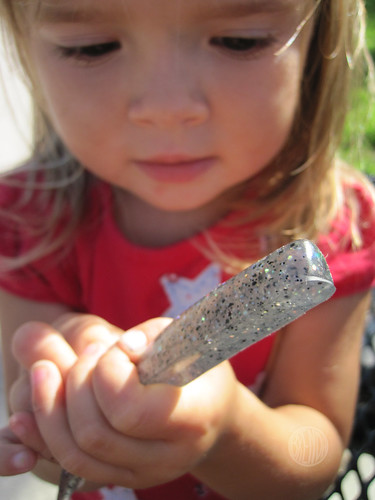 Who needs Build-A-Bear? Give your kid a squishy fishing lure.