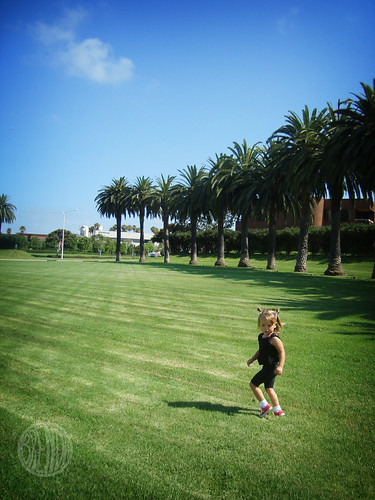 We set out on an epic walk today. I’m sorry for using that word, epic. I read somewhere that somebody hates it when people use that word to describe things other than something something something but I can’t remember what the something something was or who said it or what irritated them about that word being misused so I’m going to use it anyway because I’m ignorant and it has a nice ring to it.

Bug had a bee in her bonnet about taffy and I only know of one place where you can get taffy (besides the grocery store of course but that’s boring or Old Town in San Diego which is a bit out of our way). That place that I know is Balboa Island. There is a candy store there that has barrels of the stuff. So we decided to walk there.

I don’t want to completely give away where we live (though it’s not that hard to figure out thanks to google and some bad choices I made several years ago) so I won’t say how far we walked to get to Balboa Island. But it was far. Far enough that it took up most of our day but it was the best day walking adventure we have ever had. It wasn’t really that far where we would need to pack water and a lunch but we dilly-dallied. Something Bug does very well. 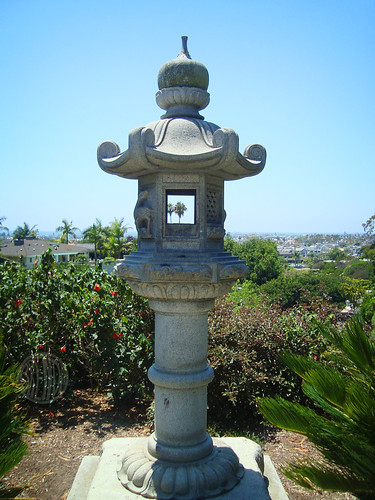 We discovered a new park that has fantastic play equipment. While Bug sea-sawed and swung on the swings, I day dreamed about all the birthday parties I could host there if only Bug’s birthday wasn’t in January. I might just have to throw her a half birthday party some year because summer birthdays are so much more fun than winter birthdays. 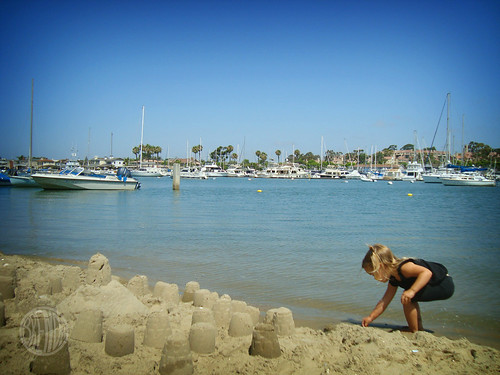 When we finally pried ourselves away from our new favorite park and ambled over the bridge to Balboa Island, we found that there was a sand castle contest going on. Who knew! Not us. I really need to stay more updated on these things. We LOVE sand castle contests. 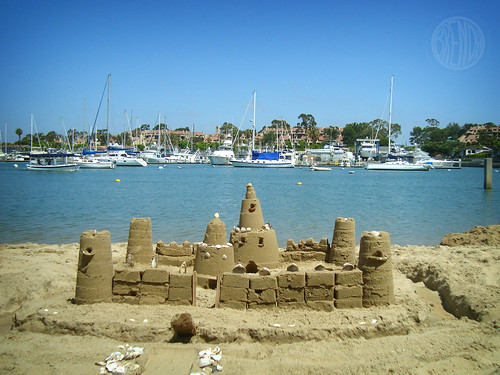 Balboa Island’s sand castle contest was just our speed too because the beach there is so narrow that the castles were pretty small and un-impressive. We could have entered this contest and beat the pants off them. Next year I might just have to do that. Also, unlike our local sand castle contest, this event is on a Saturday which means I might be able to enlist my family who can never make it to anything other than meeting (church) on Sunday. Pass it on, Mom! 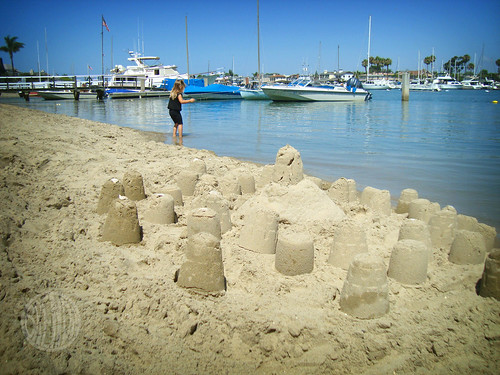 We walked around a good chunk of the island. Bug chose the water route and ducked under all the docks that moor boats along the water’s edge. She got a kick out of waking up all the ducks that sleep there in the shade during the heat of the day.

Walking around the island is so pleasant. There is a big walk way along the water and butting right up against it are all the tiny little Mc-mansions. Everyone is always out enjoying the day and many of them strike up a conversation with you if you are walking slow enough, which we always are. Bug made many friends today. 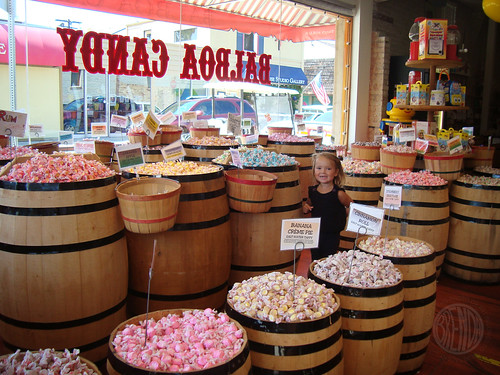 Of course we got some taffy and then it was lunch time so I ate three tacos while Bug ate three bites. As you may have gathered, I’m not so swift on uptake when it comes to the no-treats-before-lunch-rule so I paid dearly for that one. And then I spoiled her even more by letting her get a frozen banana that Balboa Island is so famous for. 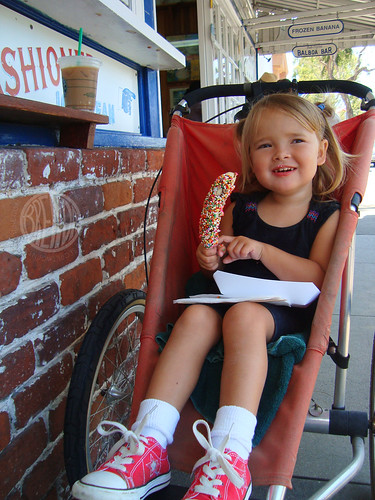 I was thinking that she might eat the banana and get some nourishment from that but I am an idiot because she ate all the chocolate and sprinkles off the banana and then decided she wasn’t hungry anymore! I should have known better. I would have eaten the mushy frozen banana but my teeth are sensitive and I don’t really like cold things. Yes, it’s true. I drink my water at room temperature and I don’t like ice cream that much. 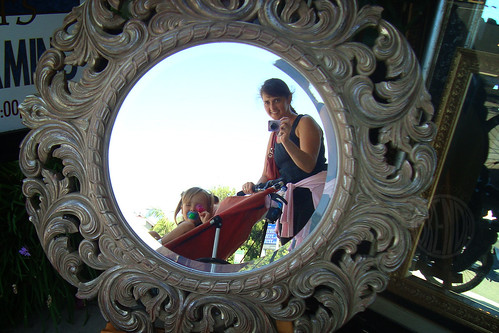 Then we ambled back home just in time for Bug to fall dead asleep in her bed an hour late for her nap. Which was fine. We’re living summer hours here at La Casa de Ponnay. Bedtime is often pushed back an hour or more. I don’t really don’t care that much. Sometimes she even sleeps in when I let her stay up and then I don’t have to get up at the crack of dawn, which is really really nice.