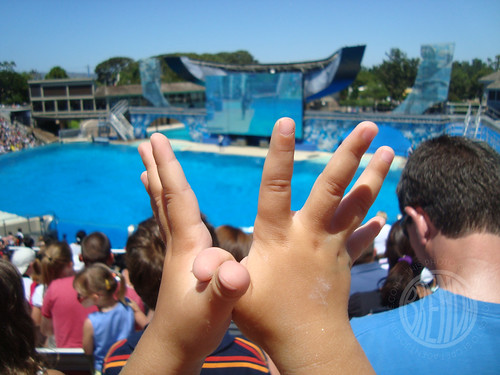 Okay, so I feel a little silly writing that meta post. There are lots of perks to writing this blog and the most important one should be that someday (providing it all doesn’t go down in some sort of terrible hard-drive crash/server explosion) Bug will get to read about herself when she was little. And hopefully she doesn’t kill me. But I’m not too worried about that because turn-about is fair play and I’m pretty sure she’ll have no trouble getting her own space on the internet if she wants it.

Speaking of, (and this is totally not about Sea World and getting me far onto another tangent) I have to add that this whole exploitation of children by their mommy-blogging mothers is about to turn on it’s head.

For example: My niece. You know her, Rapunzel? She’s eleven and she has her own blog. She has since she was nine. She doesn’t write very often but she could. I’ve been blogging about her since she was one. I talked to her about it when she was here visiting and she says she has no problems with anything I’ve ever written about her. Phew!

However, she also had no problem with taking a picture of my fat butt one day when I was bending over to get Bug out of her car seat. Thankfully, I was able to sneak her camera away from her when she wasn’t looking and delete that picture but I’m just saying that it’s fair game. One of these days I’m going to be exploited at the hands of a teenager and it might not be pretty.

So where was I? Oh yeah, blogging has perks. One of those perks lately is that we get treated like the media. We are the new media! Only with less editing and no bosses to tell us what to do. It’s like the wild wild west out here.

Occasionally, I get emails from companies asking me to test their product and write a review. Sometimes I get free tickets to events from public relations departments, hoping I’ll put out the word about their gig. It’s fun getting free stuff of course. I don’t want to touch the swag-gate controversy that went down at blogher since I wasn’t there and I have no idea what happened but I have to say that I do benefit from these things from time to time. Not often but once in a while.

I hope I have the integrity to pick and choose from these offers and only write about things that I completely 100% am on board with. There is nothing worse than a fake puff piece. I know, I used to have to write them when I worked for the alumni magazine in college. I don’t have to do that anymore.

So the other day I got a private invitation (aka last minute email) from Sea World to come down and see their dolphin show, during which they announced their new upcoming “Blue Horizons” show that is due out in May 2010. I know I was probably a last minute after-thought because they needed to fill the stands or because somebody dropped the ball and the regular media didn’t show up but I don’t care. I’m a mommy blogger! Of course I have nothing better to do than go to Sea World on one day’s notice!! I’m all over free admission like stink on… um, whatever.

We hustled our butts down to Sea World and snuck Bethany, Annalie and Bethany’s mom in with us. Actually, we just showed up and asked politely if the Actually crew could come with and of course the PR lady said yes. What’s admission to them? Peanuts.

I kind of had my hopes up that we’d see a sneak preview of the Blue Horizon’s show. The press release fluttered on about colorful exotic birds and acrobats dancing with dolphins so I had my hopes up pretty high. But I guess that’s just the hype which is what a press release is supposed to do. 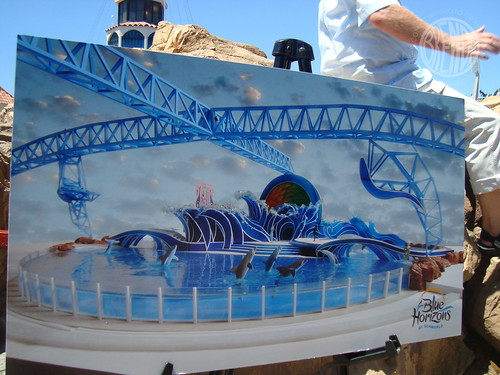 Right now Dolly the dolphin just squeaks something and the trainer interprets her squeaking as an announcement that a new show is coming. I did notice that the trainers hammed it up a little more than the last time I saw the dolphin show though. It must be kind of sad for them to finally say goodbye to a skit they’ve been putting on since 1996. Or maybe they are giddy with excitement because they’re sick of saying the same lines three times a day for thirteen years straight.

I will sort of miss the opening soak zone song. I hope they keep it some other show. Do you know it? It goes something like,

“If you’re sitting in the first twelve rows, there’s something you ought to know…there’s a 50/50 bet you’ll get 100% WET!! So don’t look so surprised when the water splashes in your eyes. I just thought you like to know about the imminent H20! …. If you want to stay drier, won’t you please move higher!”

…or something like that. (I totally googled it to get the words. I don’t have that kind of memory.) 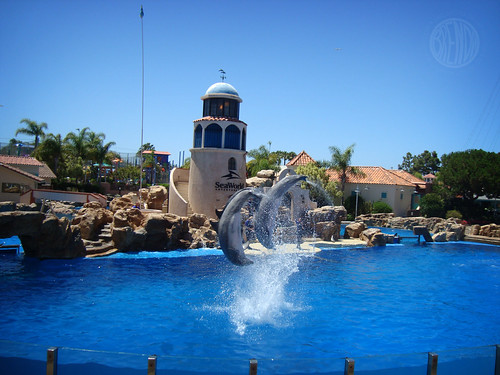 So if you want to see the Dolphin Discovery show before they can it, you might want to get down to Sea World before Labor Day. A grand finale will take place on Labor Day weekend and then it will be under construction until May 2010. There, I put the word out. I did my media job. Ha ha.

But seriously, since I had Bug I have a whole new appreciation for dolphin shows. I wasn’t such a big fan before but now that she loves them, I love them too. We’ve been to this show three times this year (which is crazy since we are supposedly “holding back” on the spoiling with amusement parks) and it’s been a blast splash every time. Was that a lame joke? I’m sorry. I told you I used to write puff pieces, sometimes the slogan writing still sneaks out.

After the dolphin show we enjoyed the rest of the park to it’s fullest. Well, as full as you can enjoy it when you are sweating under a thick layer of sunblock. But I’m not going to complain because it was FREE and it was way better than sweating at home. 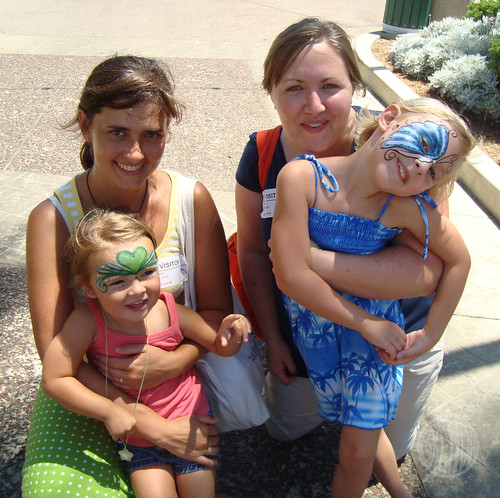 The kids indulged in some face painting, thanks to Bethany’s very generous Mom. That was a hoot. 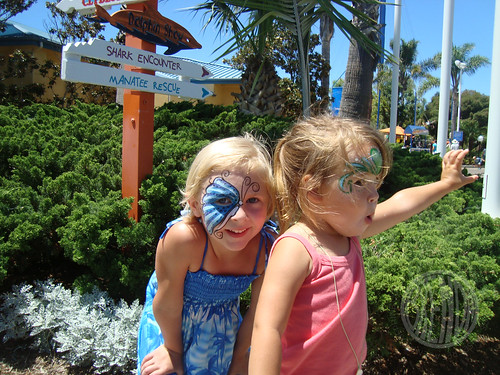 I have no idea what Bug was doing here. Some kind of interpretive dance? Telling the audience to move higher? I really do have no idea. As usual. 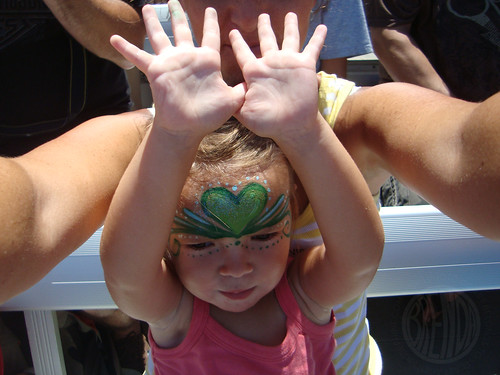 We saw the Shamu show and did the Shamu chant, another favorite song. Does Sea World have an album with all these songs? Nevermind. I have the songs stuck in my head already as it is. I don’t need to listen to them in the car too. Though if they are going to discontinue shows… hmmmm maybe I should look into that. 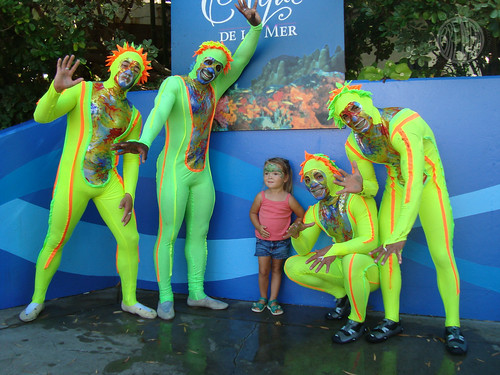 Of course we had to pose with the scary green mer-people. This is actually pretty funny because aren’t normal kids afraid of these creepy looking guys? Not Bug. She was actually upset with me because when I asked her if she wanted to pose with the Cirque de la Mer acrobats, I unknowingly walked her up to the guy in the multi-colored costume and not the group of guys with the neon yellow-green costumes.

How could I ignore her color preference!!! Have I not learned anything from her in these last three years?!!! Bug LOVES green with a passion. So after a bit of a fuss we got in line and she posed all by herself with the green guys. Crazy kid. You can’t say she isn’t consistent. 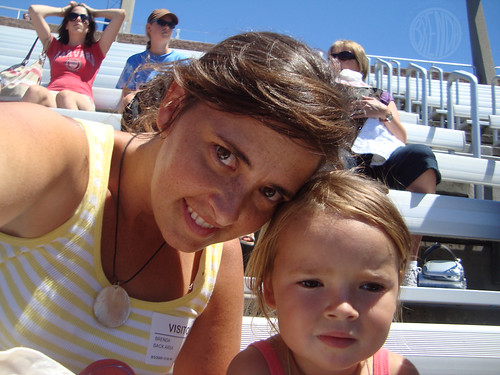 And that is my Sea World post that I couldn’t get out earlier today. I guess I won’t give up blogging just yet.