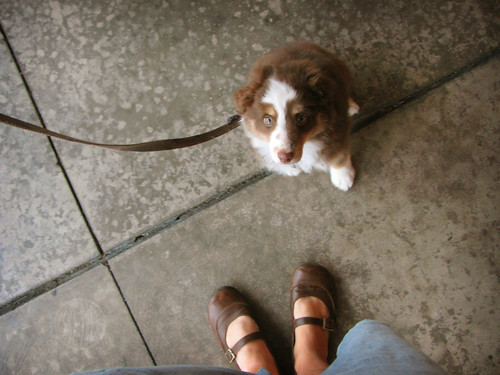 We rented a puppy today. Well, not really. We just borrowed him for half an hour. There is a pet store nearby that allows you to walk any puppy they have for a dollar. You get an official badge that says “Puppy Exerciser.” It’s a lot of fun for you and the dog. 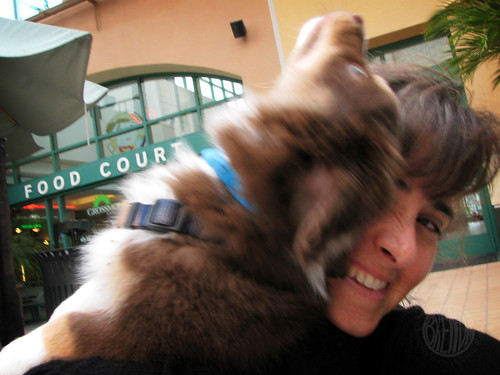 It also helped me remember why I don’t want a puppy because I forget every now and then. Puppies are so hyper and they don’t really know how to walk on a leash right away. They take years of training. Much more than half an hour. 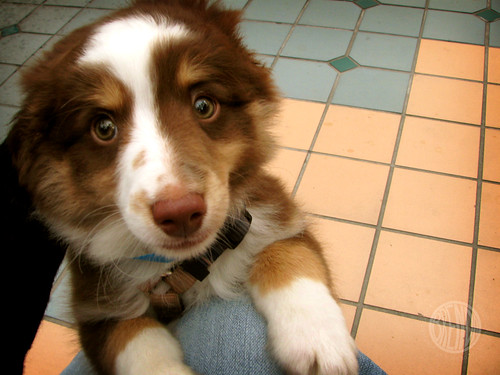 We instantly fell in love. Bug adored him even though he wanted to herd us like a bunch of cattle. He constantly would jump up and nip Bug’s jacket if she didn’t walk fast enough. Which is totally understandable because I often want to nip at her to make her go faster too. The only way we could get him to go anywhere was if Bug ran ahead so he could chase after her. 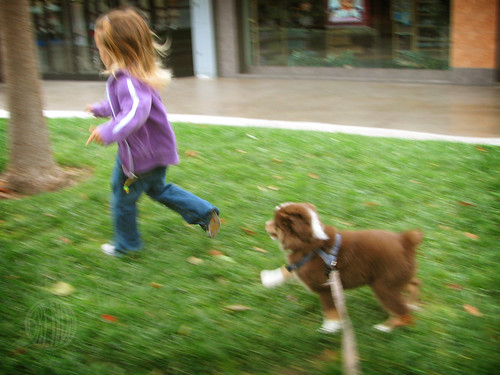 So we named him Chaser. We also named him Scratcher and Jumper and Yelper and Carmel and a bunch of other names. We tried them all on while we daydreamed about what it would be like to take him home to keep if only we had a yard… 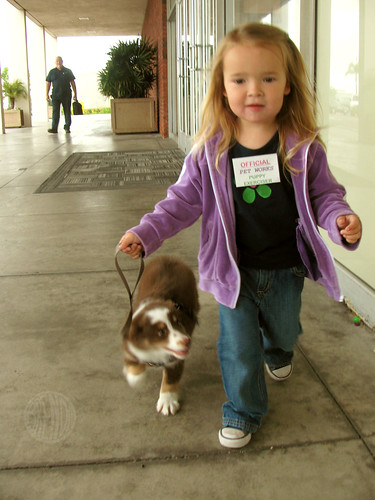 We walked Chaser around the mall as best we could. Mostly we just stopped and let other people pet him and exclaim over his cuteness. I can totally see why guys get puppies to meet girls. We met all sorts of girls…and boys and older people. It was an eye-opening way to spend a half-hour at the mall.

We met a man who used to run a ranch. He was older and stooped but he had a big shiny belt buckle with a horseshoe on it so I believed him. He looked like a rancher. He couldn’t talk long, his wife was pulling him toward some sale but I knew he wanted to. “Australian Shepherds are the smartest dogs alive,” he told us. He looked sad like maybe he’d had several Australian Shepherds in his life and he missed them.

Another man circled around us in a motorized wheelchair. Between coughing fits he told us that it’s a scientific fact that pets can lower your blood pressure. His doctor had practically ordered him to get a dog but he didn’t have one. His wife had a bird and apparently that was enough. He also had a lot to say about puppy mills and how mutts from the pound are much better pets. I believe him. I already knew that but it didn’t make me love Chaser any less. Chaser can’t help it that he’s inbred and costs way too much. He’s just a cute puppy. 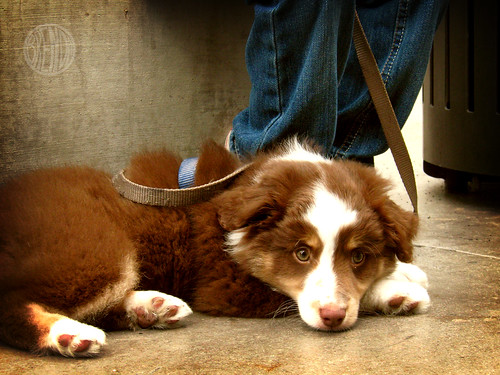 When our half hour was up I knew it would be hard to say goodbye. Bug started crying even before we had turned him in. I don’t think it’s the pet store’s intention to get you to fall in love with a puppy so you drop hundreds of dollars and take him home (though I’m sure that happens). I think it’s just a really great way for the dogs to get some exercise and learn to socialize with people. These dogs are probably the most socialized dogs around. I would think that is a good thing but I’m not sure. 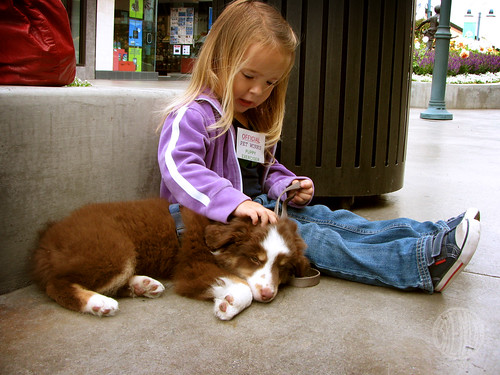 Is it as hard for them to say goodbye as it was for us? I’m hoping not. Bug cried and cried. She’s been talking about him all day. I told her we could ask Daddy if we could get a dog but I know that isn’t an option while we live in the apartment we do. Chaser needs lots of space to run and I don’t think our cats would take kindly to herding. But even though it was bittersweet to say goodbye I still think it was a fun thing to do. Who knows, maybe we’ll go back another day and take him for another walk. 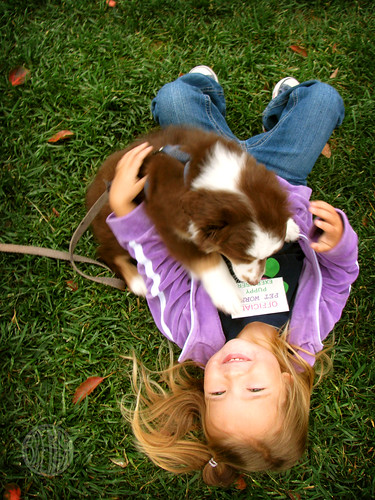 I have a feeling that someday…some year…we’ll get a dog like this and maybe we’ll name him Chaser too.