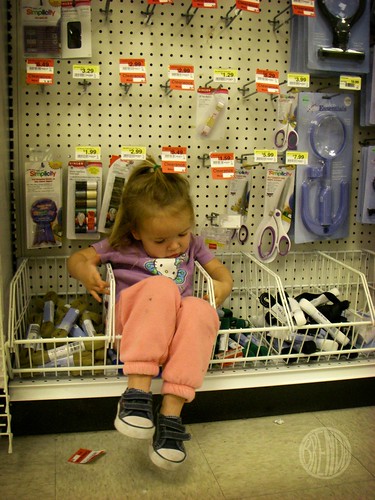 I hate shopping. It’s only gotten worse now that I’m a mom. It takes forever and is incredibly frustrating. Sure, I love getting new things. But shopping…it’s not for the weak of heart.

Toby’s youngest brother is getting married on Valentine’s Day and we are all heading up to Northern California for the wedding and a big family reunion. It’s all very exciting except I can’t wear my regular mom uniform to the wedding. You know, the one that consists of my old worn-out jeans that I wear three days in a row on purpose with whatever loose-fitting shirt I can find that isn’t stained. That’s just not going to cut it.

It’s been so long since I’ve dressed up that even my “magic dress” isn’t really very magic anymore. Sure, it will do but I think it’s time I found something else to wear besides the same old dress over and over. It’s getting a little redundant in photos.

On top of that, I have a husband who wishes I would shop more. Isn’t that funny? Something is wrong with this picture.

So Bug and I went shopping.

My first mistake was going on a Sunday. What’s wrong with me?!! Am I smoking crack? I should know not to ever ever ever ever ever go to the mall on a Sunday. I thought stores would be hurting for business because of the downwards-spiraling economy. I was a fool. Sunday shoppers must be in deep denial or from some other country where their money is worth more. It was so crowded, I couldn’t even think straight. I can’t see why anyone would ever possibly think of shopping on a Sunday as therapy. I think standing in line at the DMV would be more relaxing.

My second mistake was bringing Bug. Three is not a good age for shopping. She likes to shop, don’t get me wrong. She loves to shop. That’s part of the problem! She likes to turn the whole event into some kind of huge game where she always wins and I always lose my temper.

Trying to get her to go forward in a straight line is like trying to push water up a hill. She will go every which way but the way I want her to go. Here’s a map of our route through a typical store. I would be pink and she would be green. The only reason she ever makes it to point B is because I drag her there, nearly dislocating her arm in the process. It’s tiring to say the least. Fun for her, not so much fun for me. 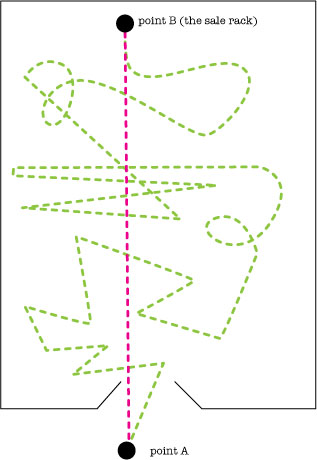 But I can’t complain too much because she does love shopping. She’s all smiles and questions and running off to try things on. It could be worse. She could be throwing herself down on the floor and crying.

She saves that sort of behavior for the grocery store. Which by the way happened today because I wouldn’t let her use the little cart. I was so embarrassed. She pitched the biggest fit. I thought I would crumble right into the floor. Then a kind older woman walked by and patted me on the shoulder. She told me I was doing good. She said she had three children and all this carrying on and pitching fits was very normal for Bug’s age. I believe the kind older woman but am I going to survive this? Is Bug just expressing her free will or do I need to take her out behind the bike racks and wallop her? Don’t answer that. 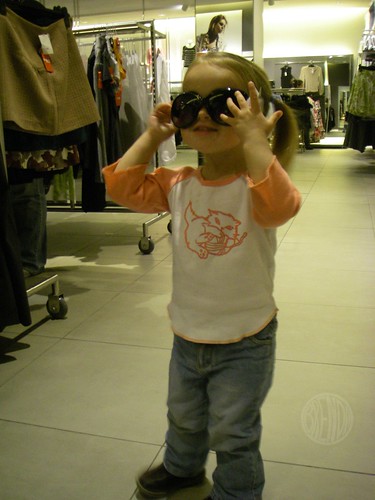 Anyway, Bug’s enthusiasm for shopping and trying on clothes is fine except I need to try things on too. I need her to stand somewhat near me and not get into too much trouble. If we can keep the displays intact and beaded necklaces from exploding onto the floor, then we are good.

Of course there is a flip side to that. The opposite of too much chaos from a toddler is the absence of it. There is nothing worse than looking behind you, expecting your toddler to be nearby, only to find her missing. Did someone steal her? I just took my eyes off her for one minute and she’s gone! I start breathing heavily and reaching for my cell phone to call 911 and then I see her feet sticking out from beneath a rack of clothes. Arg. 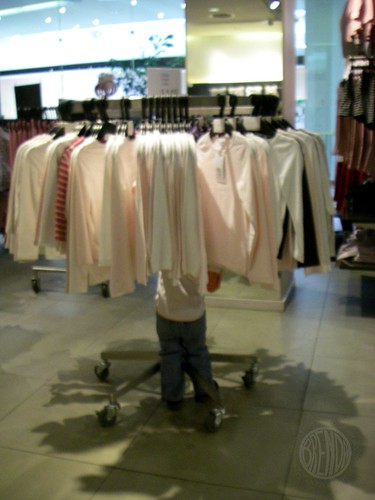 You can see her fine in this picture but earlier in the day, when I was looking for fancy dresses in the special occasions department, she really had me losing my lunch. I couldn’t find her anywhere behind the long gowns that reached to the floor. Not even a giggle gave her away. Why? Because she’s hiding of course. It’s a super-fun game called “Watch Mommy Have A Heart Attack!” 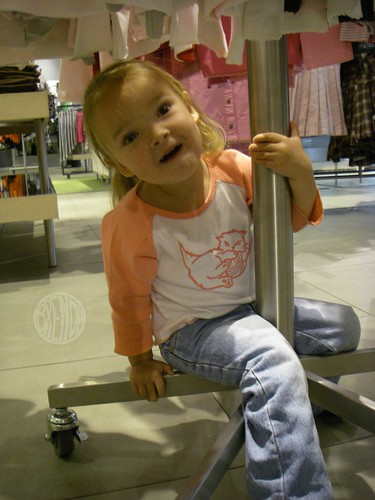 I should have taken her stroller with us to keep her corralled (that would be my third mistake) but she’s recently developed an aversion to the thing. Half the time I end up using the stroller to hold my purse and then I’m chasing after her with it wheeling behind me. It’s really a dead weight that I can’t be burdened with. 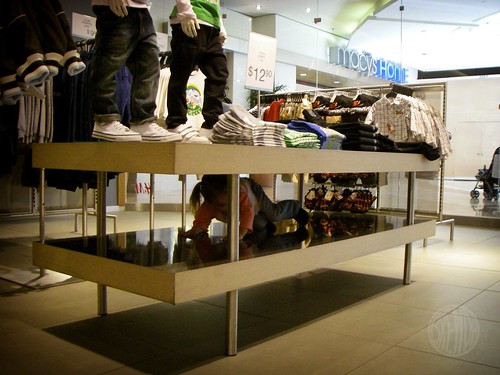 This is wartime. Next time I take her shopping with me, I’m wearing my ninja suit. 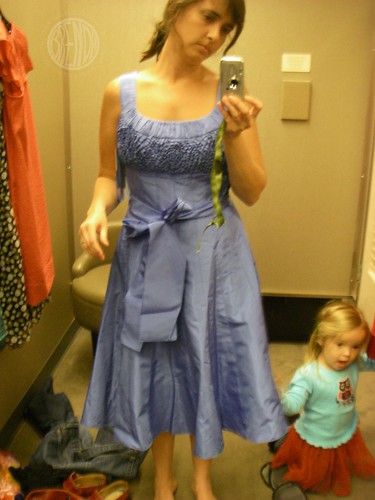 I haven’t even gotten to the fun times we had in the dressing rooms. Of course there were the meet-and-greet sessions with the neighbors by sticking her head under the wall and saying hello. I’m so glad many of the dressing rooms are completely contained. I couldn’t even think of taking her with me to one of those rooms that only divides you with a simple curtain. Much to my chagrin, Bug is very friendly and has no problem discussing “boobies” with anyone who will listen. Maybe we don’t get out enough or maybe we should never ever go out again. It’s a toss up. 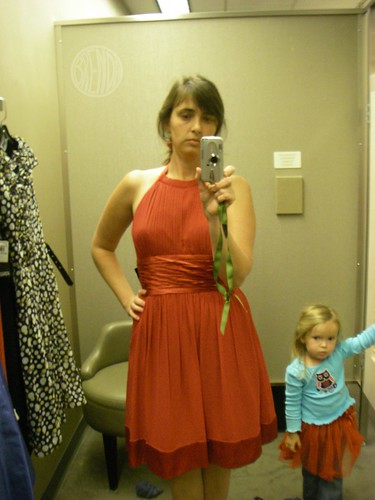 My fourth mistake was forgetting snacks. I suppose that was good for the expensive gowns that didn’t need greasy fingerprints on them but my brain hurt after a while from the repeating requests. Hungry, bored kids are not your friend. You’d think, as a seasoned mother, I would have a well-stocked bag ready for such demands but I guess I’ve taken my recent freedom from diapers a little too liberally. Who did I think I was, getting out of the house without a purse that weighed twenty pounds?!

Which reminds me! How fun is it to run to the bathroom eighteen million times with your recently potty-trained toddler who maybe-sort-of-might-have-to-go but then changes her mind while she sits on the pot and sings songs for hours on end? She is definitely in charge, this little one. She may be small in stature but she runs the schedule when it comes to visiting the restroom.

I try to be patient with her. I’m so proud of her being potty trained so quickly. It’s just a little trying sometimes. I don’t really like spending all my daylight hours staring at tile while I wait for it to be my turn to wipe her butt. I guess those are the breaks though. At least I don’t have to change diapers anymore. (And yes, I will take this post down before she goes to school and can be embarrassed by such things…though part of me thinks a little embarrassment might be good payback.) 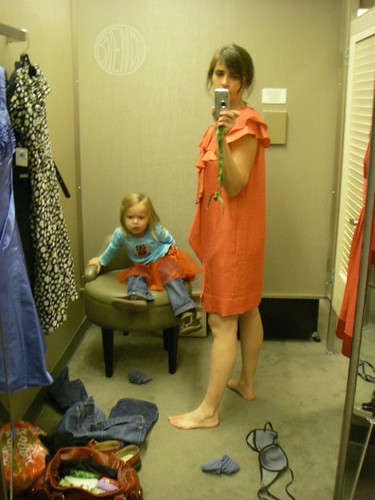 So. I tried on a lot of dresses and made a few frantic calls to Toby for support. He encouraged me to push onwards for another hour and then maybe go back the next day while Bug was in preschool.

I normally like to spend every minute that Bug is in preschool glued to my computer. I have so much work to catch up on and I don’t know if you’ve noticed or not but I never get to blog much anymore. It’s not for lack of content, that’s for sure. I just never get to sit down and type much anymore. If I’m not wrangling the kid, cooking or cleaning then I’m dead asleep. 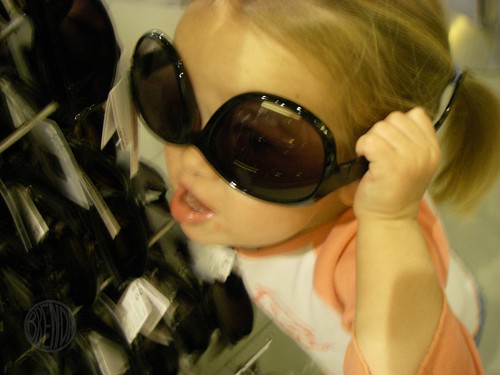 In the end, I decided to listen to Toby. I fed Bug a cookie at the local in-store cafe and then called it a day. I fought the toddler but the toddler won. I went home dress-less and defeated. Then I had a glass of wine.

The next day, after I dropped Bug off at preschool, I went back to the very same stores. The difference was like night and day. I still hate shopping but what a dream it was compared to my nightmare from the day before. No crowds! (Mondays at 10am are MUCH better for shopping than 4pm on Sundays!) No hassle! Salespeople who sincerely seemed interested in helping me! I could walk through the aisles without having to scold a little person for pulling necklaces and green socks from their little hangers. I sailed through the racks to the dressing rooms with the greatest of ease, trying on dress after dress without any feedback from the peanut gallery.

I did end up having to purchase way more than I wanted because I just didn’t know what looked good on me but later when I put on a fashion show for Toby he was pleased. Of course, I’m taking back a third of what I bought just because I don’t want to be paying off my credit card for the next six months but at least it’s done. Done done done. 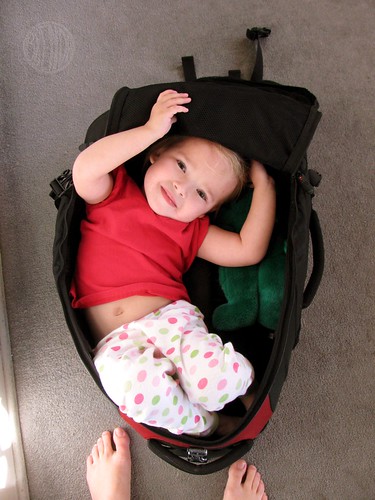 I’m now properly prepared for the wedding and then some with a smart little suit. It’s not what I would have picked—as I’m usually more of a busta-move-on-the-dance-floor sort of girl but it’s very practical and sweet.

And even more sweet is that it’s done. As far as I’m concerned, I don’t care if I ever see a mall again.

Disclaimer: these photos were not all taken on the same day. I’ve started collecting photos of her whacky shopping behavior lately as a form of coping. 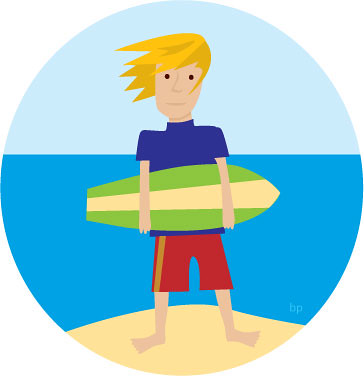 Around here a “grommet” is a little surfer guy. In other parts of the world it’s a nut or a bolt or something. And most recently, if you are in the know, it’s a website where they feature new and interesting products, called Daily Grommet. Too bad they aren’t featuring little surfer guys daily.

In order to get the word out about their new and exciting website, the folks at Daily Grommet are recruiting bloggers like me to hype it up a little. What better way to hype something than to give away FREE stuff!!! Because that’s all you really care about. I know. I’ve been watching my stats. You’re all a bunch of free-mongers.

Just kidding. But free stuff is fun, I agree.

So here’s what you have to do to win something:

Check out these videos featuring the giveaway products on Daily Grommet: 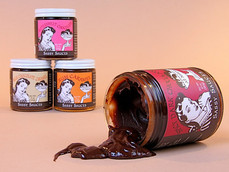 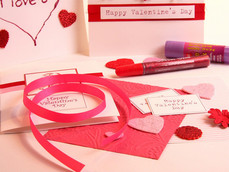 Valentine’s Day Craft supplies! Sign me up for this one.

One winner will be selected between now and Saturday for each product. I’m not making any promises on when the winner will be announced because I will be traveling and wifi access may be spotty but somebody will definitely win! So have fun!

Edited to add: As of 6:50pm PST comments are closed. A winner will be selected soon!