posted in guest posters on September 1, 2008 by SAJ 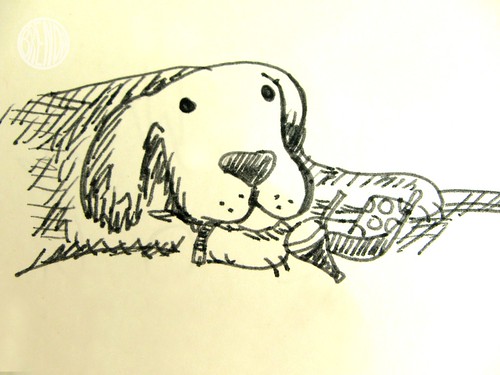 This post is from Abby from Babbling Abby. Thank you, Abby!

My husband and I had not yet been married a year when I decided that we needed to expand our family by adopting an animal of the canine persuasion. After much pestering and pleading, my husband relented, and with a not-so-subtle rolling of the eyes he permitted me to frequent the local animal shelters in search of a fine-furred friend.

He only had a couple of restrictions—the dog must be male and he must be under 30 pounds. Naturally I came home with a behemoth of a female that would eventually top out at 80 pounds. “But the super-intelligent 16-year-old surely-must-be-a-future-veterinarian said this was as big as she was going to get,” I explained after he surveyed her ginormous paws. He was less than amused.

Anyway. We named her Leland after our favorite vacation spot in northern Michigan, and I fell instantly in love with her dark eyes, goofy smile, and gentle nature. She didn’t even bark! I was convinced she was the perfect dog, despite my husband’s insistence that I totally went against his wishes when I didn’t bring home a small male breed.

Little did I know, she was stricken with a horrendous case of kennel cough. She was running a fever within 24 hours of becoming a Mullins, which was probably why she was so subdued. It. Was. Awful. She coughed up phlegm-filled snot globules as she lazed lifelessly in our 8X10 apartment (well, maybe it wasn’t quite that small—but you could totally see the kitchen, living room, and front door in one straight shot if you were sitting on the toilet). One vet visit and pricey antibiotic later, she was back to her chipper mutt-ish self. Having visited an animal professional, we were informed that she was likely part Afghan Hound and part Golden Retriever.

Afghan Hound, huh? Isn’t that the hippie-looking dog with the long, straight hair? As a matter of fact, it is! Oh, and according to Fetch Magazine, it is also one of the dumbest breeds. Awesome. The husband was now basking in his I-told-you-so-glory. While he thought I had brought home an enormous female nincompoop, I still believed she was perfect.

Like all things perfect, she was innately flawed—or innately stupid according to dumbest-dog-breed lists). What neither the vet nor the intelligent 16-year-old shelter worker (who, come to find out, was likely serving his community service with the SPCA) told us was that Leland had a penchant for shoes…expensive shoes…expensive shoes that belonged to ME. And now the story takes a drastic turn in the opposite direction of all-encompassing love and affection.

After falling asleep in bed one night, I awoke around 2am to find that my beloved had yet to join me. It was typical for the husband to fall asleep on the couch, so I trudged sleepily to the living room. (If you can really call it trudging—it was more like mother-may-I-take-two-giant-steps-forward to get from the bedroom to the living room.) Aw, the husband and man’s-best-friend had fallen asleep together on the couch. It was all darling and picturesque and everything until I noticed that something had been strewn in small bits about the carpet.

It took all of 0.2 seconds to realize that no, it wasn’t snowing suede scraps and boot-liner fluff. THE DOG ATE MY UGGS! After dropping dramatically to my knees to further examine the massacre that had befallen my coveted boots, I awoke my husband and startled the dog who looked bemused from her perch on the couch. She cocked her head and looked at me as if to say, “What? They were UGG-ly anyway, and I was hungry. The kibble just wasn’t cutting it around here.”

I expected my husband to rouse and discipline the offending culprit, but he merely shrugged his shoulders and headed to bed without even offering to help clean up the Ugg wasteland. But you know what he was really thinking? No male dog I know would ever be into shoes. Must be a girl thing.

For the only time in our marriage, I actually think he was right. But don’t tell him I said that.

Though I truly wanted to return the dog to the shelter after her midnight snack, she’s still around. She has since destroyed both mine and my husband’s Crocs sandals, chewed the edges of my husband’s Rainbow flip-flops, and the gnawed the heels of some dress shoes of mine. Yes, I guess we’re actually the dumber breed for leaving any shoes out in the first place. Sigh.