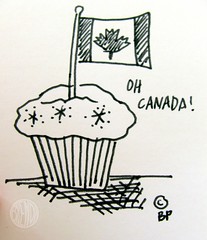 This post is from Danita from Drowning in Laundry. Thank you Danita aka Sleepynita!

It is hard to believe that with the accessibility of the Internet and the ability to research ANYTHING you want that some people out there have completely false ideas about Canada and it’s people. So today while I am posting on one of my favorite American blogs I thought I would clear up some of the misconceptions about Canada.

Myth #1: It is cold in Canada and there is snow all year round. By the time February/ March rolls around it sure as heck feels like winter will never end in some areas, especially in Edmonton, Alberta where I am from. We are the farthest north major Canadian city and we pay dearly with cold. Now that being said the snow usually starts right after Halloween and is gone by mid-April. Our temperatures get warm in May, June, July, August and we have the odd HOT September day before transitioning into fall. Hot enough that I have central air conditioning in my house and it gets used almost every day. In the past month we have had many days where the temperature has hit 90 degrees Fahrenheit. The downfall (where I live anyways) is that we really don’t get much of a fall season and I have always wanted to live somewhere where the trees change color before getting fozen up with snow. I keep thinking of how pretty Michigan is during that time of year.

I once had a guy from Miami ask me if it was hard to shop for a bathing suit for the first time ever. I was a little confused by this comment and asked him what exactly did he mean by that? He said “well it is so darn cold up there and everything freezes that you had to buy your bathing suit in the States right”? Trust me it gets HOT here, and many people are quite surprised when they come to visit. You should see my farmer tan.

Fun Fact: In most areas of Canada you need a block heater for your car, and you plug your car in for a while before using it so that it is not frozen when you go to start it? If it doesn’t start you can call a cab company to come boost your car for $15? That is a silly thing to need to know, but handy….Also? Get some snow tires. All season radials are only all season if you live in Vancouver.

Myth #2: Healthcare is free in Canada. Not really. Actually we pay dearly for “not so universal anymore” healthcare. Our taxes are really painfully high to pay for our healthcare system. A person making $80,000 a year can expect to pay 36% in Federal Income Taxes alone, and another chunk on top of that to provincial taxes. On top of this some provinces have heath care premiums you pay each month which can run about $110 per month for a family of four. The laboratory I work in has a user fee on top of all the taxes; an extra $250 for a test. That is all sorts of ridiculous. Give me a co-pay any day. Monthly Health care premiums are not tax deductible. We also can not use the interest on our mortgages as a tax deduction (although if I was ever Prime Minister that would be the first thing I would change). All across Canada there is a Goods and Services tax (5% it used to be 7%) that we pay on any non-essential items and many provinces also have additional Provincial Sales Taxes added to the Goods and Services Tax.

You think with all the tax we pay we would have a larger and better equipped military? Nah. But there is a Tim Hortons in Afghanistan for the troops.

Fun Fact: One donut is taxable under the Goods and Services Tax rule, but if you buy a 1/2 Dozen donuts this constitutes a meal and you likely will not be charged GST on that purchase. All I have to say is that if you are eating meals of 6 donuts at a time you are probably very thankful of the “free” healthcare that will save your but from re-mortgaging your home in case of a heart attack.

Myth #3: Canadians do not have the same technology as Americans and don’t get the same TV shows and movies. This is a tricky little myth to clear up. First we get the same movies, usually on the same release date as the Americans. Overall, Canada has less severe censorship then the Americans when it comes to movie ratings. Now as far as technology goes we have all the same technology, we just may call it something different. Like a TiVo here is called a PVR (Personal Video Recorder) or DVR (Digital Video Recorder) and sadly the PVR does not make the cute TiVo noises. Sometimes we have to wait for things to get released here and usually the longest wait is for small Apple items like the iPhone (lets not even talk about how Rogers – the cell phone company – is screwing people over on iPhone contracts right now) or even the iPod Mini when it first came out. This isn’t because we are in Canada and behind the times, it is more because of supply issues.

Now I must point out that Canada’s iTunes store SUCKS compared to the American store. We can not get any decent TV shows on it and the music choices are quite limited in some genres. It seems like it is all Can-Con (canadian content – sadly our TV shows suck). Honestly? If I had access to the American iTunes store I would totally cancel my Satellite dish and buy what little TV I watch from iTunes. Sometimes we may wait a little longer to get some TV shows on regular cable but we will have them available on specialty channels. Like Dexter, we just got that on cable but it has been on the Movie Channel for some time now.

Fun Fact: For some reason DVD’s and CD’s seem to be less expensive here, unless you are on Amazon.com, which is FAR SUPERIOR to Amazon.ca. Did you know that you can order groceries for delivery (in some cities) through Amazon? How. cool. is. that? Colour me jealous. Yes that is an extra u in the word colour…….

Myth #4: Canadians say eh? a lot. Honestly? I have no idea where this comes from and I can not think of anyone I know who says this or “a-boot” instead of about. I must admit that I do say eh? when in the States for some reason and I think it is to counteract all the y’all’s I hear. Either that or I am trying to fulfill the Canadian stereotype. :)

Fun Fact: We call winter hats toques (pronounce it tooooook) and some people call a sofa a chesterfield. Although we do have Starbucks on every corner – for some reason the national coffee is Tim Hortons.

Other things to note:

Canadian policemen are not all Mounties. Each city and some provinces have their own police force that look just like the American police do. The Mounties only wear the funny red outfits on special occasions, other then that they dress like any other police officer as well.

Canada’s Greatest Canadian is a man named Tommy Douglas, who was the Premier of Saskatchewan and “invented” the healthcare system. More notably he is also Kiefer Sutherland’s Grandfather.

Our shopping somewhat sucks here. We have no Target (but there are Wal-Marts all over boo. hiss.), Neiman Marcus, Macy’s, Bloomingdales, Anthropologie, J. Crew, Nordstoms or Victoria Secret’s. We are getting Bath and Body Works, Williams Sonoma, Pottery Barn, Apple Stores and whole ton of other things. Yay! You can imagine I spend a lot of time shopping when we go State-side.

The Mall of America is not the biggest in North America. This place is: West Edmonton Mall. It is the worlds largest entertainment and shopping centre all under one roof. When you spend as much time indoors as we do this place just makes sense. South China Mall in China is the worlds largest mall with the most lease-able square footage at 7.1 MILLION square feet of shopping.

Also, I do not know Bob from Toronto, sorry.