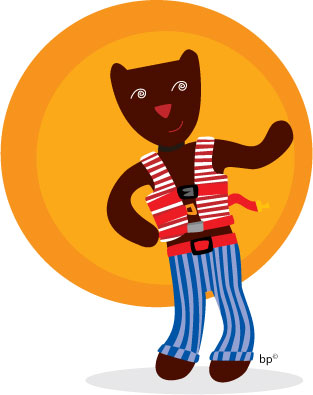 This post is from Mr. Noodle from Noodle Junction. Thank you, Mr. Noodle!

He was an out-of-the ordinary bear, that’s for sure.

There was some zig-zaggy stitching on his belt and he wore a vest that had seen better days for sure. But there was something about him that everyone in Bearsville sort of admired and, perhaps, even loved.

They all called him Mr. Buckles and I’m not sure that I ever knew his real name.

Younger bears would see him and giggle, as he passed by, about his eccentric clothes but he didn’t seem to mind. It was like he knew some special secret about his buckles that they weren’t privy to. Some inside joke that only he knew.

He was that kind of bear. He had that quiet ego that made the other, older, bears respect him, even with his oddities. Everyone always knew that ultimately he would end up in a home that would love and respect him for being the odd bear that he was. Everyone was a little jealous of that fact, I believe. Not one single bear in Bearsville wanted to end up in a home where they were just “eye candy”, which was how teddy bears in Bearsville referred the ones who ended up on the top shelf of some spoiled little girls bedroom with no love or affection. You know the girl… she begs and pleads to her rich daddy to take the poor teddy out of Bearsville, promising to love it and care for it and, within a week, the bear is on the top shelf, collecting dust, wishing they had been the kind of bear who gets cuddled and roughed up so much that they eventually end up in a treasure chest with a missing eye and two or three stitched-up “love repairs”.

I remember the last time I saw Mr. Buckles.

It was a week or so before he was taken out of Bearsville and put with the little boy who likes buckles so much that he will stop whatever he is doing—playing at the beach, digging sand castles, running around on his front lawn, to go and play with the buckles on his stroller. I heard he is a smart little boy who is fascinated with clamps and clasps and the way things work. I asked Mr. Buckles, “Why is the buckle so important to you?”

His answer came easy to him. Sort of like he had thought all of this out before and expected this question. He suavely replied, “The buckle is one of the simplest mechanisms there is. But so completely complicated at the same time. You see, my friend, the buckle is the meaning of life. Whether it’s trying to make ends meet with your budget or two people finding a mate. To find two things that connect so tightly that tension, resistance or friction can’t break them apart is why we all wake up everyday. People think I am strange because I love the buckle. I think I am normal, I just wear my buckles on my sleeve instead of hiding them.”

As he walked away I found myself marveling at how, even though his heads and arms didn’t quite fit together like a perfect Teddy Bear, his buckles made him one very incredible bear…

p.s. If you need an SAJ fix (?!) there is interview with me over here at Creative Construction: Life & Art. Nothing you haven’t already read here but still kinda fun.