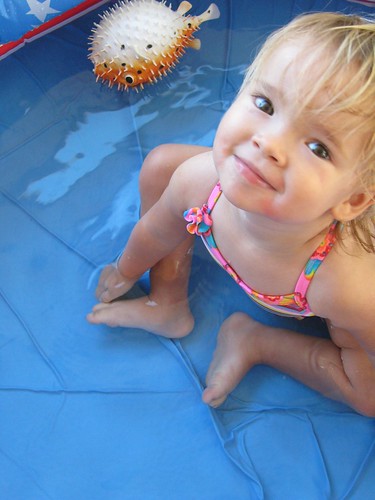 It has been Hot! Hot! Hot! here. Hotter than dog’s breath, as I like to say. It really feels like dog’s breath too because it is so humid all the time. When I was out in the sticks it was about 109, sometimes 115 but it seemed way more bearable than the 93 degrees in the shade of my hot humid house with no air conditioning.

I would kill for some air conditioning. I try and try to imagine that I am in Paris or that I am the sexy señorita slaving away in the kitchen while sweat drips down the tendrils of my curly hair slipping out of it’s romantically loose bun BUT my imagination is in need of some anti-freeze or something because it just poops out and starts panting.

How do I always forget that summer is like this? I used to say that summer was my favorite time of year but this year… I’m thinking I’m way more into Fall. Fall with it’s pumpkin pies and crisp apples. Give me your tweeds and wool sweaters. I think I should move to Sweden.

Anyway! This post is not about me belly aching about the heat. It is about our NEW NEATO FEATO DEETO BLOWUP KIDDIE POOL! Yes, I wheeled the stroller down the hot-enough-to-fry-an-egg-on sidewalk this morning, to our local hardware store and bought an eight dollar blow up pool! I think it is one of the best investments I have ever made.

Baby Bug and I nearly died of heat stroke getting it at 9:30 this morning but it was so worth it. When we got home, Baby Bug took a nap and I begged Toby to blow it up for us. I tried to blow it up myself but I almost passed out. I have the lung capacity of a mouse. I saw stars and everything.

It took Toby quite a lot of trickery to get it blown up too. Who knew you need a bike pump for these things? We don’t have a bike pump. But we do have a bugaboo stroller with a handy dandy mini pump for pumping up bugaboo tires. It wasn’t a good fit but with sharp knife (for reasons I’m not sure of) Toby managed to get the silly thing blown up just in time for Baby Bug to wake up.

I take that back. He managed to get it blown up while she ate lunch in her high chair. You should have seen her excitement as the pump made it’s whoosh whoosh whoosh sound. I’m sure she had no idea what this giant blue and red plastic expanding thing was but she knew it had something to do with Fun with a capital “F”. Whoosh Whoosh Whoosh went the pump. Swing swing swing went Baby Bug’s dangling legs under her high chair. She could barely eat she was so excited. 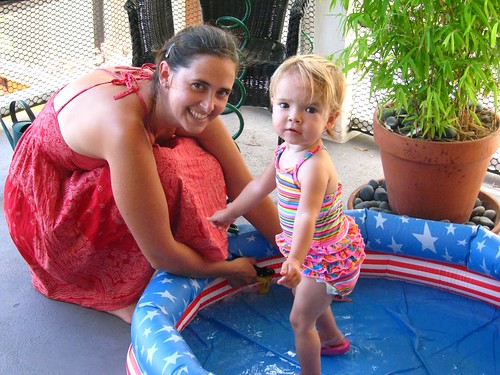 We had a blast. The best part for me is that this little body of water somehow made the temperature on our patio drop a good ten degrees. I can’t say for sure since we have no thermometer but it sure felt like it. It’s amazing how much cooler you can feel when you have your feet submerged in cold water. Bad mood heat stroke instantly gone.

And then Baby Bug had to go and poop in the pool. Yeah. You knew that was coming. She wore her diaper and bathing suit for a good hour but then the diaper became the GIANT ABSORBING DIAPER and swelled up bigger than her. She looked like a queen bee with a giant abdomen.

I changed her out of the GIANT DIAPER and into a swim diaper and that worked for about three minutes until she decided she wanted to run in and out of the house and sit on the couch and leave giant wet butt prints all over the place. So we ended up taking the swim diaper off and just standing around asking each other what we should do. Get her dressed? Block off the patio and keep her from playing in the pool? Put her in another swim diaper? What to do… what to do!

While Toby and I stood around like clueless parents, it suddenly got very quiet and next thing we knew there was a silent toddler squatting in her new kiddie pool taking a poop as if it was her own private toilet. Nothing good ever comes from a silent toddler. And poop, ugh poop. I am quickly becoming immune to the horror of poop.

I scooped the poop out with a plastic bag and Toby dumped the contaminated water over the side of our patio into our neighbor’s garden below. We made jokes about the five second rule and the fact that our pooped in pool water is probably a hundred times cleaner than the beaches in Huntington. But the sad fact was, our super duper neato feato deeto kiddie pool fun was officially over. 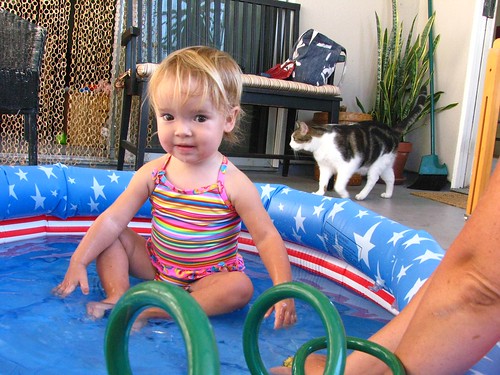 Until tomorrow or something.